A mixed race couple was left crushed when their Florida home was appraised for $135,000 more after they removed evidence that a black woman lived there.

Abena and Alex Horton said that when they first had their four-bedroom house in Jacksonville valued, the appraiser told them it was only worth $330,000 — which was considerably lower than the couple had expected.

Suspecting that racism might be at play, the couple removed all family photos and books by black authors from the house, and made sure that only Alex, who is white, was home for the second appraisal; lo and behold, this time the appraiser assigned the value at $465,000, over 40 per cent more than the previous estimate. 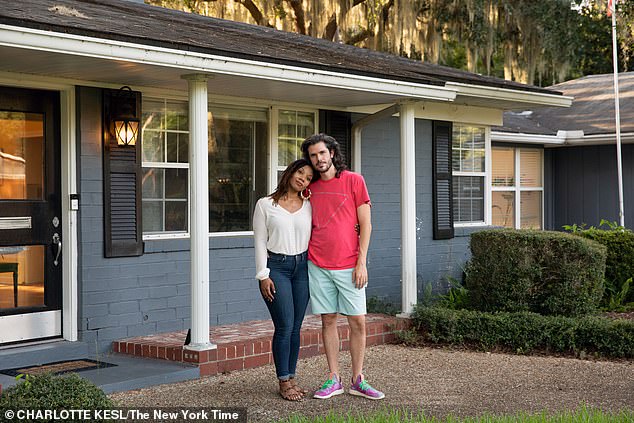 Suspicious appraisal: Abena and Alex Horton are looking to refinance their four-bedroom house in Jacksonville, Florida and had it appraised in June

Home sweet home: The first appraiser valued it at $330,000 — lower than the couple expected and less than other homes in the area

The couple was starting the process of refinancing their home when they scheduled the first appraisal in June.

They estimated that their four-bedroom, four-bath ranch-style house in a predominantly white neighborhood would be appraised for $465,000 — and looked to other homes in the area, which were valued at $350,000 to $550,000.

When the appraiser came, however, had different ideas.

‘He expressed exaggerated surprise when he saw me working at my home office during the walk-through.’

Ultimately, the appraiser valued the home at only $330,000, which Abena called ‘laughable.’

‘We appraised far lower than neighboring home sales with fewer bathrooms, fewer bedrooms, significantly lower square footage and half the land,’ she wrote.

Terrible: Abena removed any photos that showed black people and replaced them with images of white friends; she also stored away books by black authors 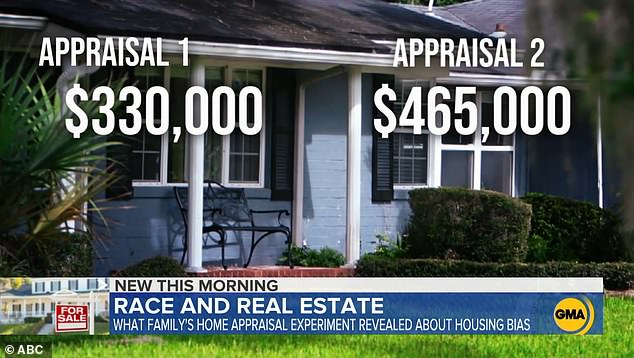 Compelling evidence: A second appraisal came back 41% higher at $465,000, which Abena and Alex attribute to racial discrimination

Speaking to ABC News, she said rolled her eyes at the number, calling the original appraiser ‘so petty and hateful.’

‘Why did I let myself forget that I live in America as a black person and that I need to take some extra steps to get a fair result?’ she said.

The Hortons managed to get the bank to agree to a second appraisal, and this time around they made some changes.

Abena, a lawyer, removed the photos of their multiracial family, replacing them with paintings of her white husband and his parents, as well as holiday cards from white friends.

She also put away books by black authors like Zora Neale Hurston and Toni Morrison and made sure Shakespeare was on display instead.

When the second appraiser came, only Alex was home, as Abena and their six-year-old son had gone out. 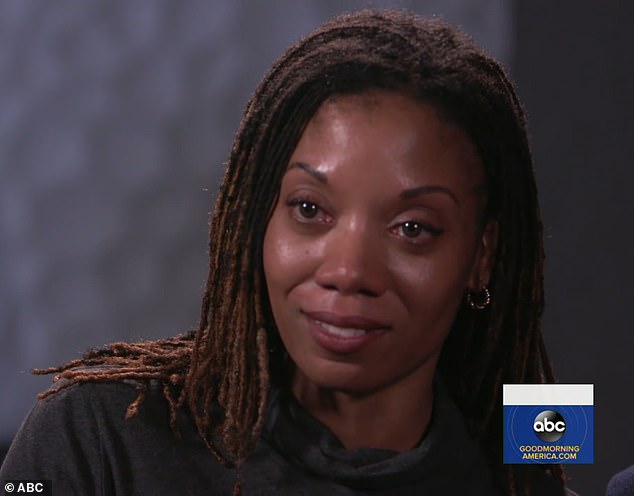 ‘My heart kind of broke,’ Abena said. ‘To know just how much, me personally, I was devaluing the home just by sitting in it’ 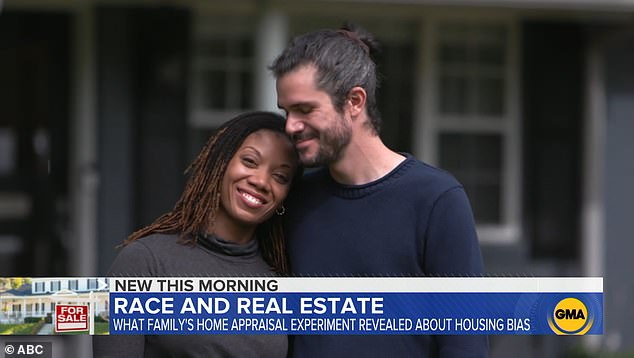 Reported: The Hortons said they have filed a complaint with the Department of Housing and Urban Development

‘I know what the issue was. And I knew what we needed to do to fix it, because in the black community, it’s just common knowledge that you take your pictures down when you’re selling the house. But I didn’t think I had to worry about that with an appraisal.’

She said the experience was ‘crushing’ and was ‘ashamed’ that her son would noticed that she’d hid their race.

‘I’m ashamed to say that I really wanted to refinance and pay off my house sooner and have full equity in my home, and so I was willing to put up with that indignity to do it because I knew it was going to be effective,’ she told ABC News.

‘So it was a combination of pragmatism and deep and profound sadness.

After the second appraiser left, Abena was in tears.

‘Because we realize just how much more removing that variable increased the value of our home,’ she said. 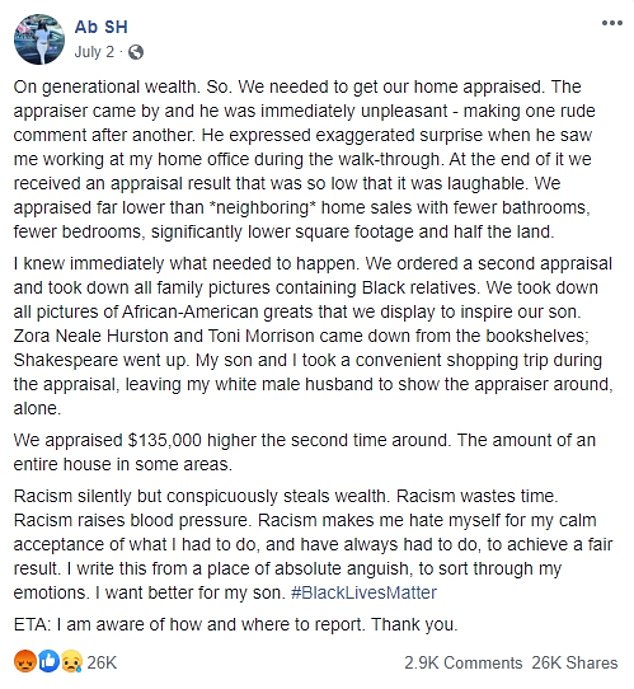 ‘To know just how much, me personally, I was devaluing the home just by sitting in it. Just by living my life. Just by paying my mortgage. Just by raising my son there. How much [the first appraiser] felt that that devalued my house, devalued the neighborhood.’

In addition to being emotionally crushing for the Hortons, this kind of discrimination is illegal.

The Fair Housing Act of 1968 says that home appraisers cannot discriminate based on race, religion, national origin, or gender. Those who do can lose their license and even go to prison.

The Hortons said they have filed a complaint with the Department of Housing and Urban Development.

‘Racism wastes time. Racism raises blood pressure. Racism makes me hate myself for my calm acceptance of what I had to do, and have always had to do, to achieve a fair result.

‘I write this from a place of absolute anguish, to sort through my emotions. I want better for my son.’

Sources said Mr Stokes – whose Seven Group Holdings parent company is Channel Seven’s biggest shareholder – began talks in April with the boss of the US conglomerate to discuss the potential merger.

The talks included discussion of merging the two companies’ sales and marketing teams in Australia but the two sides could not reach a deal, The Age reported.

While Mr Stokes’ negotiations with ViacomCBS president Bob Bakish did not result in a deal, media analysts said it indicated the 80-year-old Western Australian billionaire was prepared to offload his debt-saddled Seven network assets. 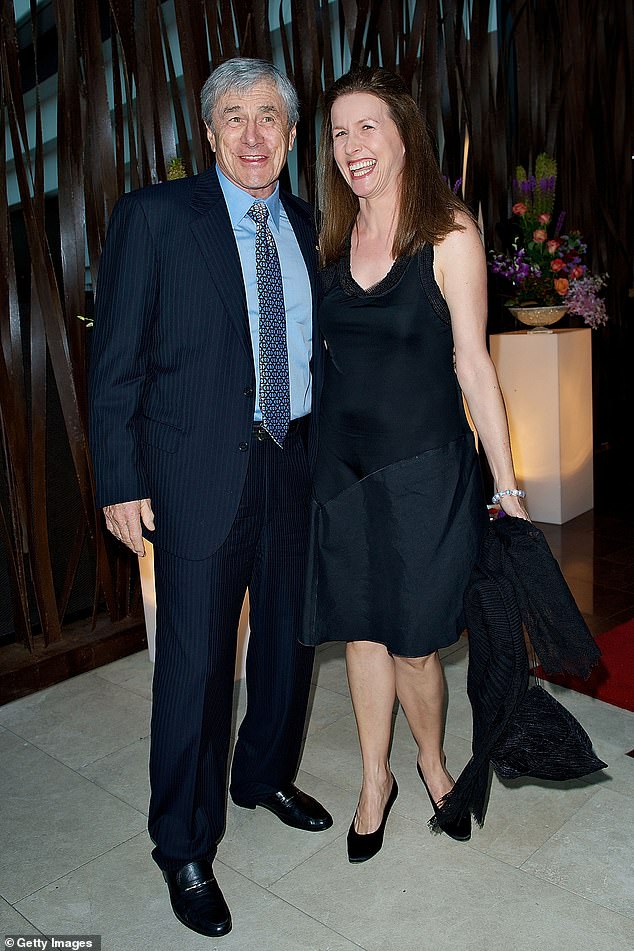 Kerry Stokes pictured with his wife Christine Simpson-Stokes. The Seven West Media chairman was reportedly in talks with media giant ViacomCBS to merge parts of Channel Seven and Channel Ten

As of the end of July, Seven’s net debt had reached $481million.

Seven chief executive James Warburton has also made clear his intention to sell off certain parts of the company to allow it to restructure more easily. 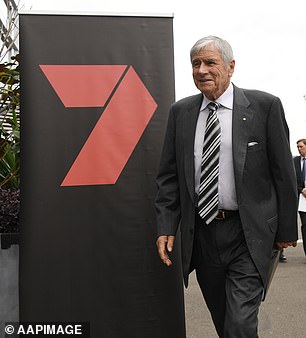 Impasse: Talks between Mr Stokes and the ViacomCBS boss included discussion of merging the two companies’ sales and marketing teams in Australia but the two sides could not reach a deal

Seven and ViacomCBS have both declined to comment on the report.

Sources said Mr Stokes was undeterred by Australian federal laws prohibiting more than one of the free-to-air TV networks being owned by the same company.

The Seven West Media chairman – who was valued at $3.8billion by Forbes this month – is reportedly optimistic about navigating around the rule because of his close ties with Canberra.

Treasurer Josh Frydenberg was the best man at the wedding of Mr Stokes’ son Ryan in 2016.

Ryan Stokes is understood to have less interest in his family’s media holdings than his father. 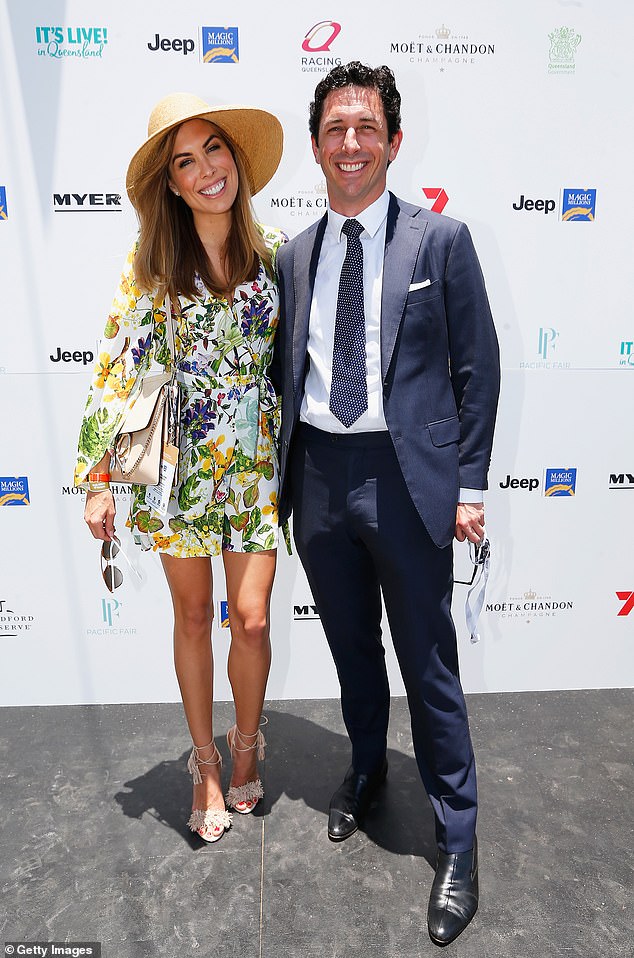 Ryan Stokes pictured with his wife Claire. He is understood to have less interest in his family’s media holdings than his father

Last month, it emerged Seven West Media had refused to pay full price for its broadcast rights with Cricket Australia, only making a partial payment that is certain to stretch a relationship that is already incredibly strained.

Seven and CA were at loggerheads on the eve of the 2020-21 season, with the disgruntled free-to-air broadcaster threatening to walk away from its commitment to the sport.

Seven, which was due to pay $25million to CA, confirmed a smaller total had been transferred.

‘Seven has paid the first instalment reflecting our assessment of fair value,’ Mr Warburton said in a statement.

ViacomCBS’s Australian subsidiary owns Ten and the local versions of MTV and Nickelodeon and turned over more than $27billion in revenue in 2018. 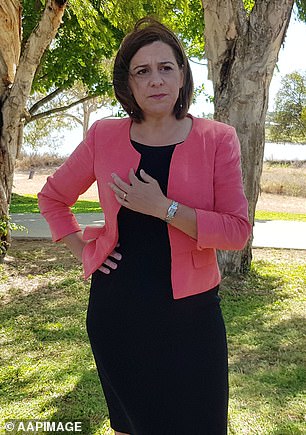 Queensland Liberal-National leader Deb Frecklington will set up a police taskforce dedicated to tackling the drug ice if she wins Saturday’s state election.

The new taskforce, costing $8million, will use staff from existing police units.

Ms Frecklington claims Labor has been soft on crime while in power and has let it get out of control in north Queensland.

‘We will shut down the big crime gangs that are pedalling drugs to our kids,’ she told reporters in Townsville on Monday.

‘Under the LNP there will be more treatment, more prevention and more rehabilitation.’

The death rate for ice, the street name for methamphetamine, has increased four times in Australia since the turn of the century.

Ms Frecklington will also invest $2 million on mental health and drug awareness in partnership with the North Queensland Cowboys.

Last week the LNP announced it would trial a night curfew for teenagers in Townsville and Cairns for six months.

Under the plan, which is aimed at reducing crime, teens still out after curfew will be arrested by police and taken to community centres.

They will be held there until picked up by family members, with parents slapped with a $250 fine each time one of their children is caught outside.

Ms Frecklington says the policy isn’t racist or aimed at any particular group.

‘I find it offensive that people think that this is a racism issue. This is a juvenile crime issue and it doesn’t go across race.’

Ms Frecklington came up with the plan after holding numerous crime forums since 2017.

She said police in her electorate support the curfew policy as well as other officers across Queensland.

‘I come from the South Burnett – my local coppers love this policy. In fact, they’ve asked for it to be extended,’ Ms Frecklington said. 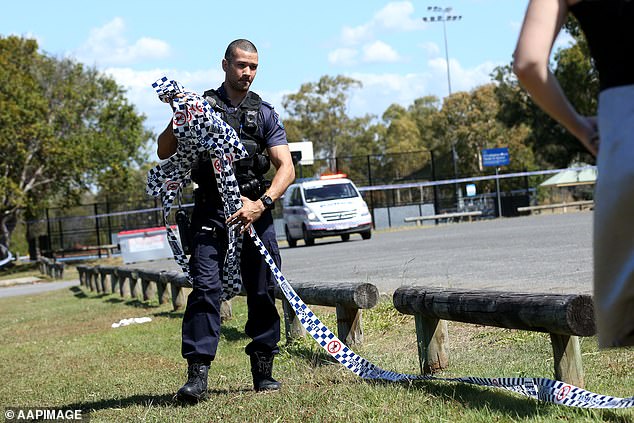 Last week the LNP announced it would trial a night curfew for teenagers in Townsville and Cairns for six months. Pictured: Police in Brisbane

A baby has been left in a critical condition after being mauled by a dog at a home on New Zealand‘s North Island.

The newborn was left with horrific injuries after the attack in Enderley on Sunday night.

The infant was rushed by St Johns Ambulance to Waikato Hospital, and was listed as being in a critical condition.

‘Emergency services were called to a Hamilton address at around 7pm last night after an infant was bitten by a dog,’ a New Zealand police spokesperson told Daily Mail Australia. 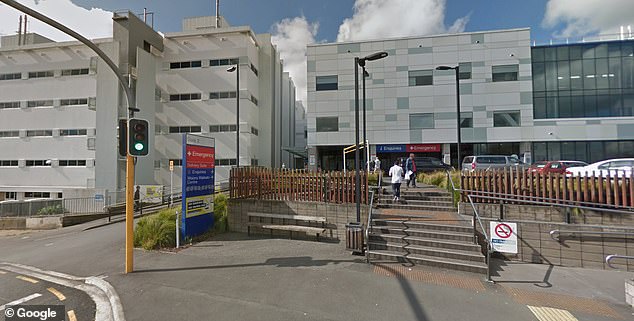 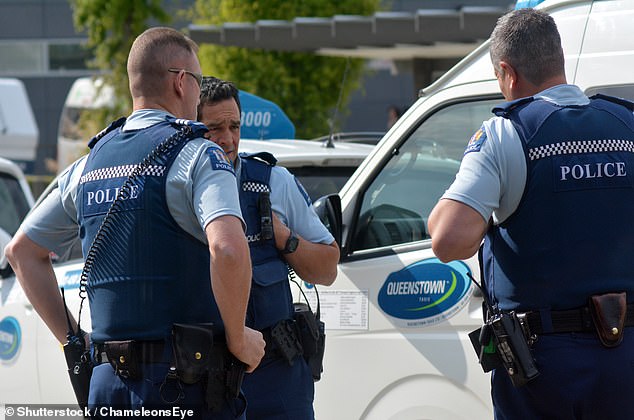 ‘The infant was transported to hospital in a serious condition. Inquiries into the circumstances of the incident are ongoing.’

Police could not confirm the gender of the baby or the breed of the dog.

The dog was seized and secured at the Hamilton City Council animal control facility.

‘This is a traumatic time for all involved and our thoughts are with the families and individuals involved,’ she told NZ Herald.

Data obtained by the New Zealand Ministry of Health found there were 4,958 dog attacks that required hospitalisation between 2004 and 2014.

The research found most attacks happen at home, with children under 10-years-old most vulnerable. 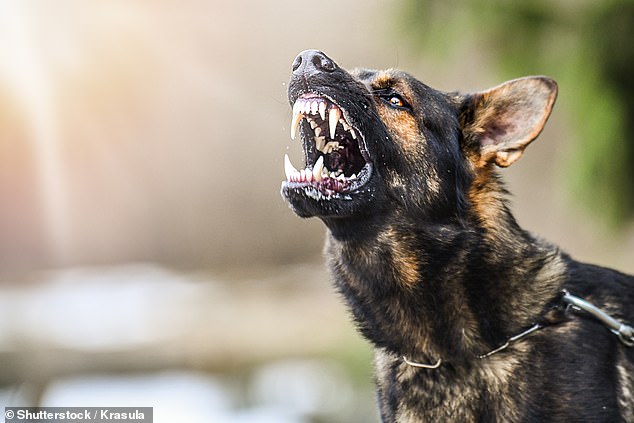