Pregnant influencer Emily Mitchell died suddenly of a pulmonary embolism, her family has revealed, after she ‘became unresponsive’ while eating breakfast at her Rhode Island home three days before Christmas.

The mother-of-four is thought to have been around 16-weeks pregnant with her fifth child when she passed away; her unborn baby also died as a result of her condition.

Emily’s husband Joe shared an update about his late wife’s cause of death on the family’s GoFundMe page this week, explaining that the state Medical Examiners Office had confirmed a pulmonary embolism – a blockage in the pulmonary artery of the lungs caused by a bloody clot – was the cause of death. 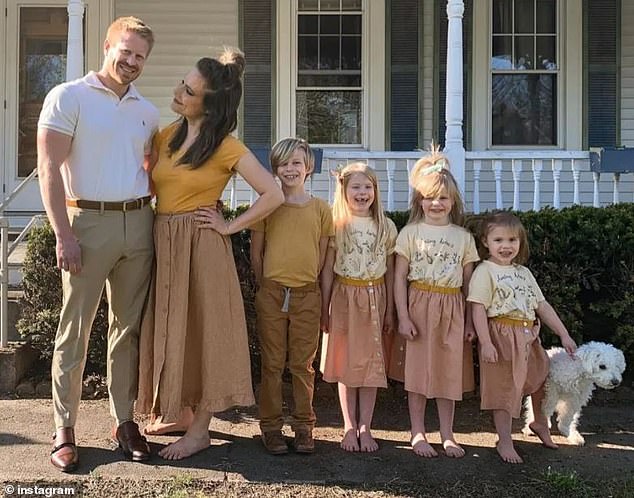 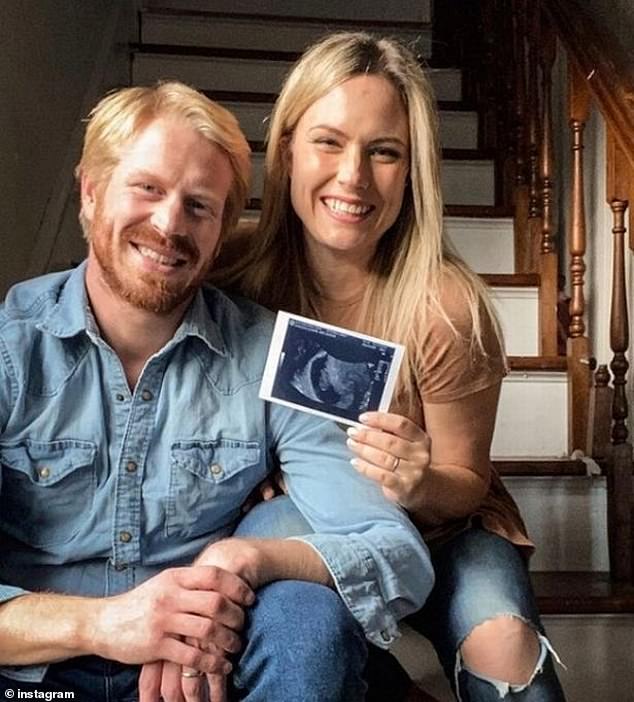 Upset: The tragedy occurred a month after Emily and Joe revealed they were expecting their fifth child. The unborn baby also passed away with his mother on December 22

What are pulmonary embolisms and what causes them?

A pulmonary embolism is a blocked blood vessel in the lungs, which can be life-threatening if not treated quickly.

Symptoms include difficulty breathing, an elevated heart rate – and, if they go untreated, victims can suffer loss of consciousness.

Pulmonary embolisms are caused by blood clots that travel to the lungs through the veins. They typically start in the deep veins in the legs, however on rare occasions they can form in other parts of the body.

In patients where blood clots are found, urgent medical treatment is required before they cause a blockage. In these cases, sufferers are usually given an injection of anticoagulant medicine in the hospital to stop blood clots getting bigger and to prevent new from clots forming.

However, if tests confirm the patient has already developed a pulmonary embolism, they will have to receive at least five days of anticoagulant injections – and will need to take the tablets for at least three months.

In many cases, those with pulmonary embolisms can make a full recovery, however the condition can quickly become deadly if they do not receive urgent treatment.

In the post, Joe – who had four children with Emily: Finn, Isla, Edie and Lulu – opened up about the family’s heartbreak over the loss, admitting that it has been ‘challenging’ for them to ‘wrap their heads around’ the beloved mother’s sudden death on December 22.

‘A few days ago we learned from the state Medical Examiners Office that the official cause of death was a pulmonary embolism,’ he wrote.

‘Although it is challenging to wrap our heads around how this could have happened, we know all first responders and medical personnel did everything they could to help, and therefore we are certain that it was simply her time; the Lord was calling her home.’

He added: ‘The children and I are so thankful for the outpouring of love and support in the wake of the sudden passing on of our beloved Emily and baby Joey. Words can’t describe how meaningful your words, gestures, expressions, and encouragement have been to us.’

The blogger, who lived in Rhode Island, boasted 107,000 followers on her The Hidden Way Instagram page where she doucemented her faith and family life with her four children. She announced that she was expecting her fifth child in November.

Emily’s husband explained how the family’s faith has been helping them to cope with their grief, writing: ‘We miss Mom so much but we also have peace and joy as believers, knowing that she is truly in a better place in the presence of her Savior, having trusted Jesus at an early age. “For God so loved the world that he gave his one and only Son, that whoever believes in him shall not perish but have eternal life” (John 3:16).’

He then directed supporters to visit the website of the family’s nondenominational church, North Stonington Bible Church.

The update about Emily’s death comes two weeks after the family first shared the news of her passing in a heartbreaking statement in which Joe recalled how his wife had ‘suddenly become unresponsive’ while having her morning coffee and toast. 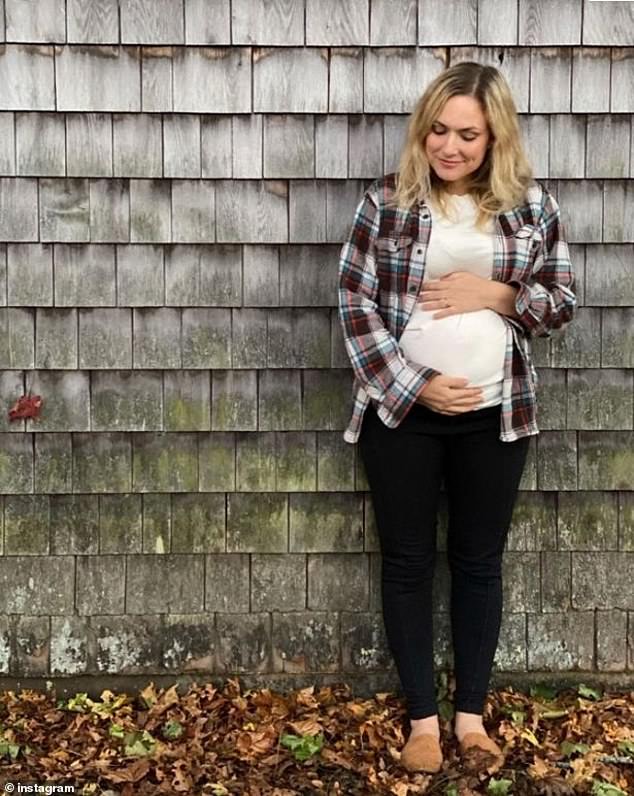 Grieving: Joe shared that the family has struggled to wrap their heads around Emily’s death, but said that their faith is helping them to cope with their grief 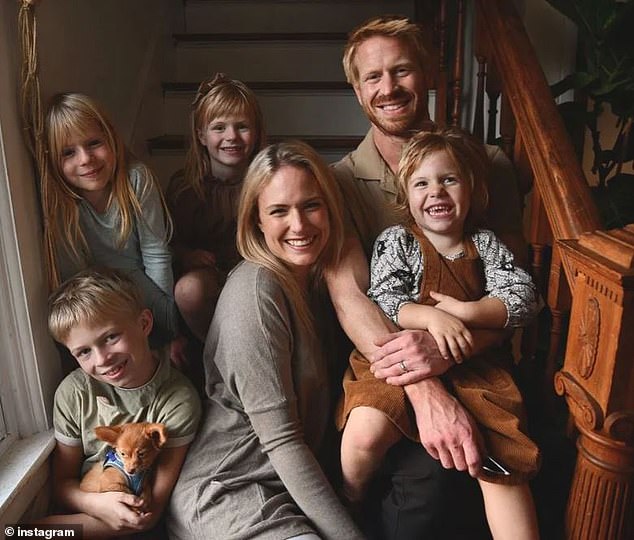 Support: A GoFundMe page has since been set up in order to raise money for Emily’s family 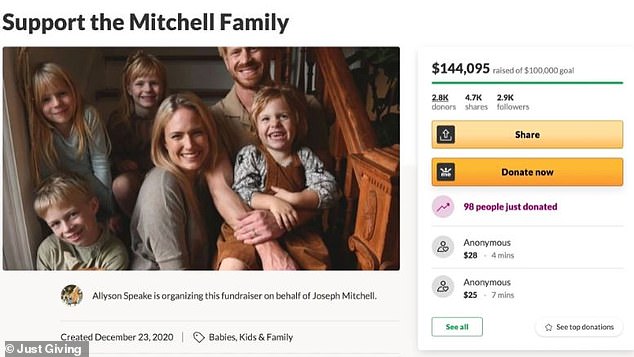 Speaking out: In a statement shared on the page, Joe said of his wife’s passing, ‘Our hearts are broken and her joyful presence will be greatly missed by so many’

‘Our hearts are broken and her joyful presence will be greatly missed by so many,’ he wrote.

‘Em made a big impact in so many people’s lives, and this loss is incomprehensible for anyone who knew her. Our friend was a dedicated mom and wife, she had a heart for the Lord, and loved her children so dearly.

It continued: ‘We are heartbroken by her passing and as a community we wish to express our love for her family through this fundraiser. These funds will go towards her children’s education next year, as well as the many costs Joe and the kids will face as they adjust to life without Emily.

‘We appreciate everyone’s concerns about her sudden passing, and want to thank you all for the love you’ve expressed in the form of messages, calls and letters. Your words didn’t go unnoticed and her family is very grateful for your support during this devastating time.

‘Em was having her morning coffee and toast when she suddenly became unresponsive. Despite the prompt attention of her children, husband, father and other medical personnel, all valiant efforts to resuscitate were unsuccessful.

‘She went home to be with the Lord. The doctors are still working on answers for her family. We will update everyone with answers when we get them.’ 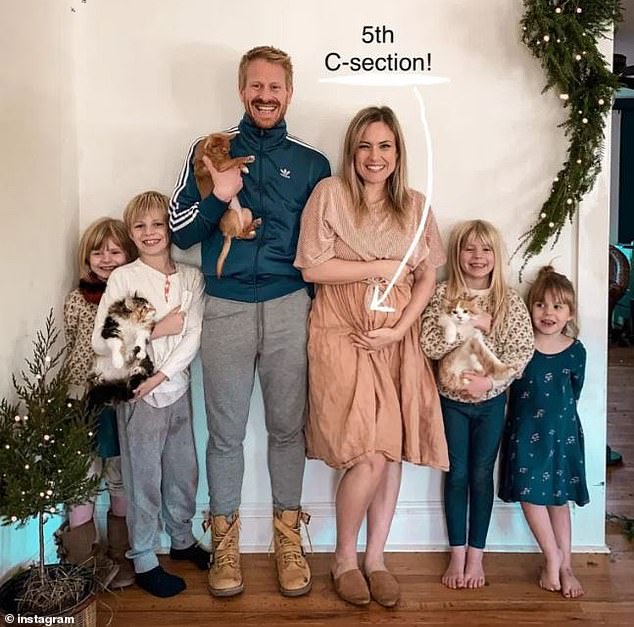 Update: Earlier this month, Emily had shared with her followers that she was planning to give birth to her fifth child via C-section, as she did with her other four kids 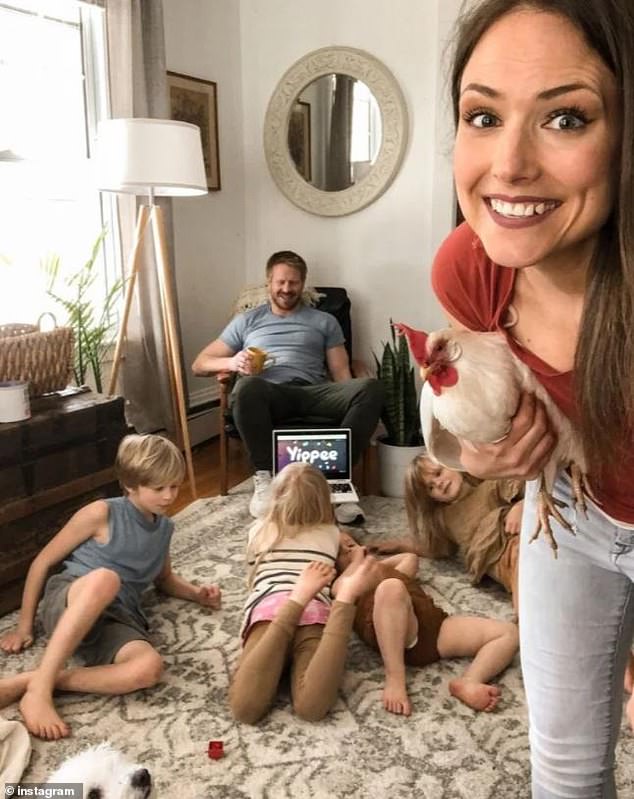 Tribute: An online obituary described Emily as ‘a devoted wife and incredible mother to her four children’

An online obituary described Emily as ‘a devoted wife and incredible mother to her four children’.

It added: ‘Beautiful inside and out, Emily had an infectious smile and a kind, compassionate spirit.’

The social media star took to Instagram in November to share that she and Joe were expecting their fifth child together, while opening up about their nervousness over the prospect of having another baby.

Her post read: ‘YOU GUYS. NUMBER FIVE. Who guessed the secret?!!! You’ve probably noticed I’ve been a little MIA..welp this be the reason lol. Number FIVE comin in hot and we are here for it 11 weeks 2 days and counting [sic].’

And, earlier this month, Emily shared with followers she would be undergoing her fifth caesarean.

She wrote: ‘This will be my FIFTH C-Section. However your baby gets here, just know YOUR EXPERIENCE is valid and worthy.

‘YOU are no less a mother if you needed emergency medical intervention, had a planned c-section, or an epidural.

‘You aren’t a “better” mother if you had a home birth or an unmedicated vaginal birth.

‘And if you grew your brood through adoption or surrogacy or family blending? Those are YOUR babies and YOU SIT PROUDLY at the table of motherhood.⁣’