EastEnders star Dean Gaffney and former Corrie star turned personal trainer Danny Young partied up a stotm with a bevy of beauties on a superyacht in Ibiza on Thursday.

Dean, 42, a father of 23-year-old twins could be seen topping up his tan in an all-white ensemble as he reclined with a pretty blonde, while tucking into drinks, before she followed him around the boat in her white bikini.

Danny, 33, who used to date Hollyoaks actress Nikki Sanderson, 36, could be seen dancing with a group of bikini-clad women on the front of the yacht. 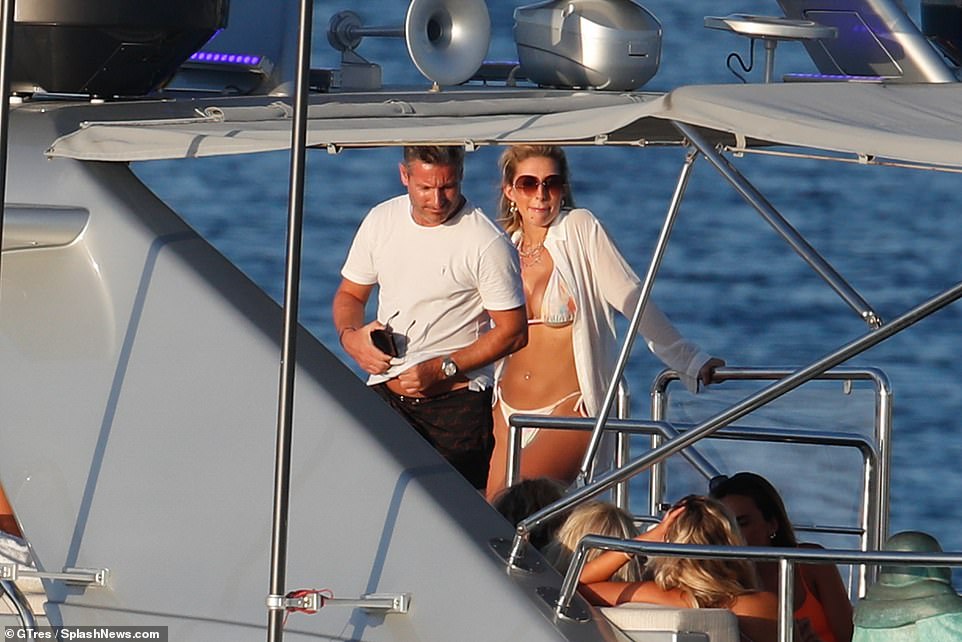 Riding high: Dean Gaffney (pictured) and ex Corrie star Danny Young partied with bikini-clad beauties on a superyacht in Ibiza on Thursday after EastEnders star was slammed for ‘partying with OnlyFans girls while people die from coronavirus 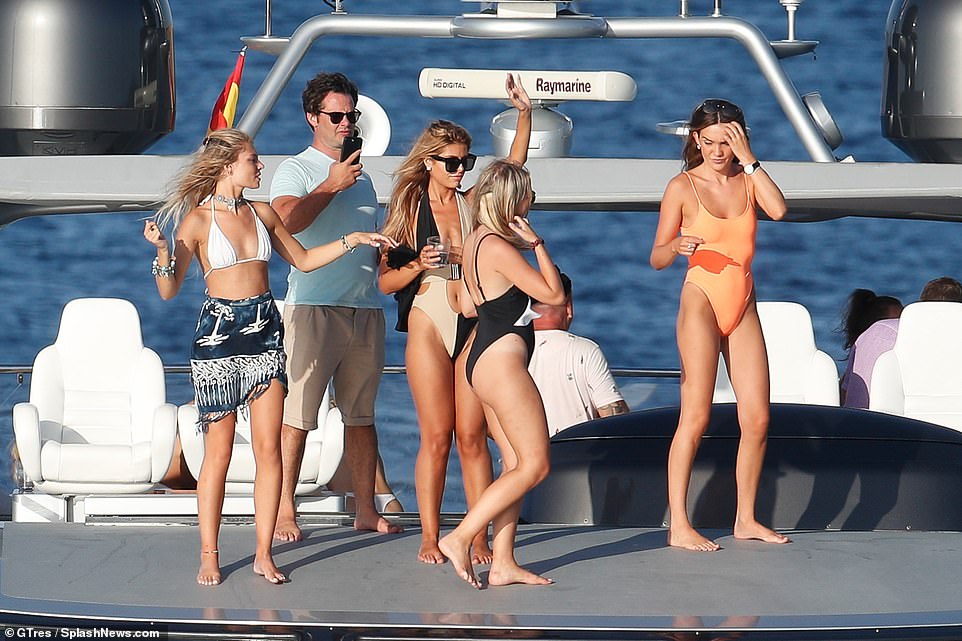 Making memories: Danny, who played Warren Baldwin in Coronation Street until 2013, was snapping photos on his phone as he danced with a group of bikini-clad beauties

He could then be seen talking separately to one blonde lady who was wearing a white thong bikini.

The outing comes days after Dean’s EastEnders co-star Jamie Borthwick slammed him for ‘partying in Ibiza with OnlyFans girls while thousands die each day’ due to the coronavirus pandemic.

The soap star, 42, revealed his sunsoaked Spanish getaway on Instagram at the end of July, leaving fellow EastEnders actor Jamie Borthwick to put his partying in context. 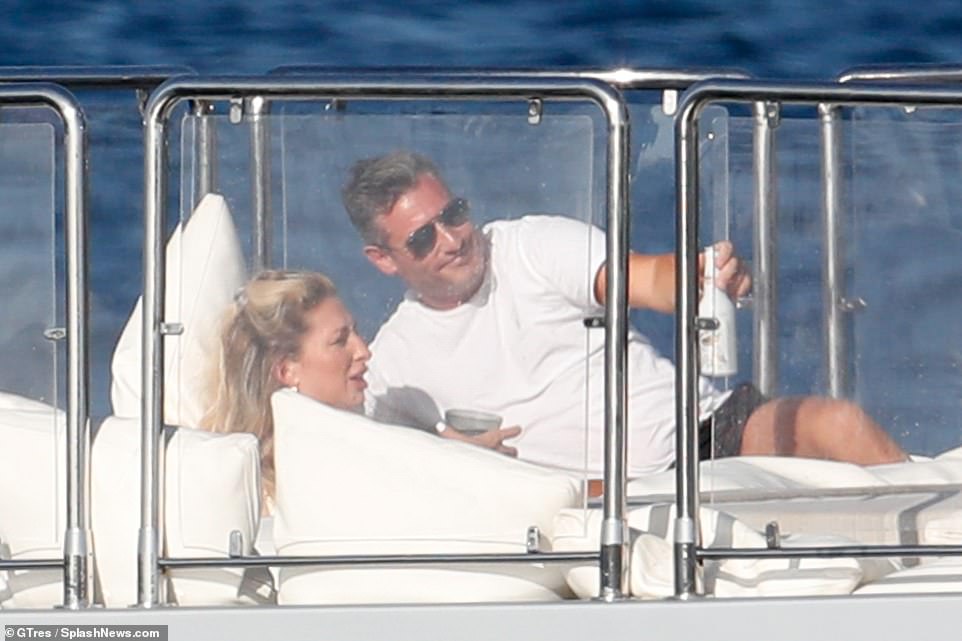 Someone pass him the suncream: Dean looked like he was going a little pink as he had some drinks while reclining with a pretty blonde 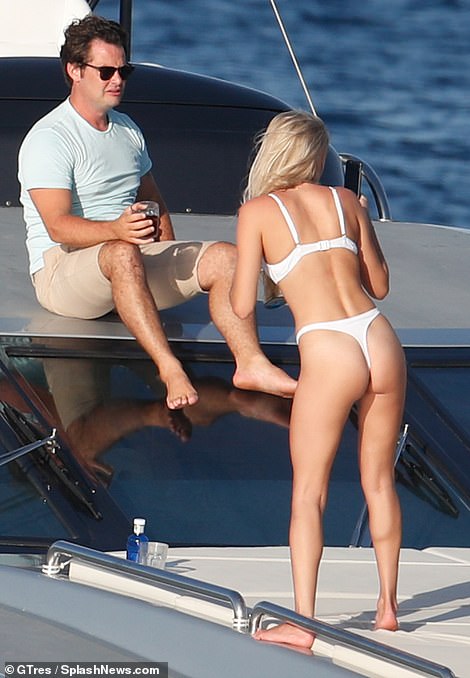 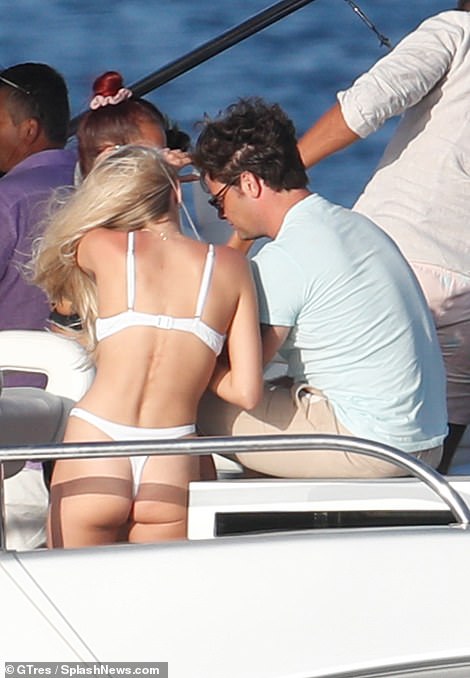 Taking in the sights: Danny appeared rather taken with a thong-wearing blonde once, as they headed off for a separate chat

After Dean shared a photograph of himself loving life in Ibiza, captioned: ‘Never alone,’ followed by a sun emoji, the reaction wasn’t quite as positive as he may have expected.

Responded to the snap, Jamie wrote: ‘Accept at party’s surrounded by onlyfans girls when there’s 1k dying a day.’

Michael Greco, who also used to star in EastEnders, chipped in on the interaction with laughing face emojis, before correcting Jamie on his grammar pointing out: ‘although it’s Except not Accept.’

Seeing the funny side in his grammatical error, Jamie replied: ‘haha Grecs is right, Borths miles off it.’

Dean also chose not to take it too seriously, adding: ‘Haha LOVE this Grecs love this! Touché Jamie x.’

The actor, best known for playing Robbie Jackson in EastEnders vowed to date older women after splitting from his model girlfriend Rebekah Rose-Ward, who at 25 was just two years older than his twin daughters, Chloe and Charlotte. 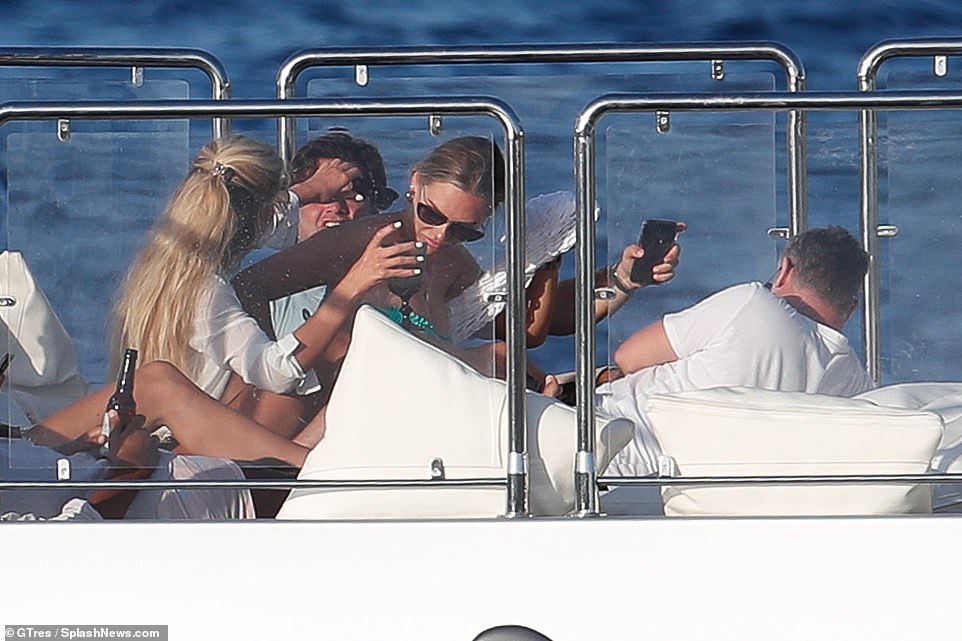 Room for one more: The group all piled up in a small space as they enjoyed the sunshine

‘But I think it’s really hard because obviously we go on dates for two hours and the show only depicts two minutes of that.

‘You’re on a date with ten cameras in your face, it’s not easy.’ He added that after editing, the dates ‘don’t always show what actually happens.’ 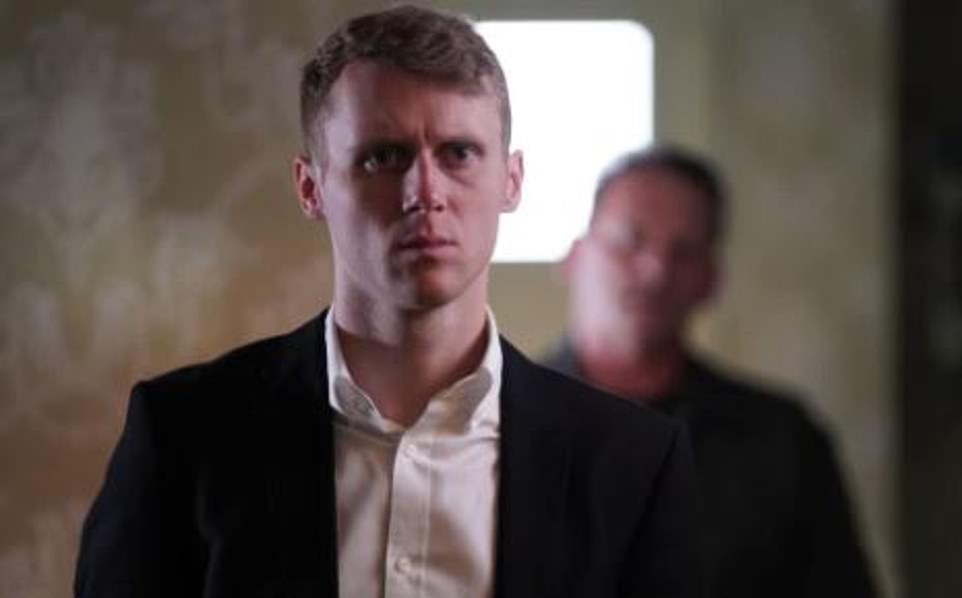 Not having it: The outing comes days after Dean’s EastEnders co-star Jamie Borthwick slammed him for ‘partying in Ibiza with OnlyFans girls while thousands die each day’ due to the coronavirus pandemic 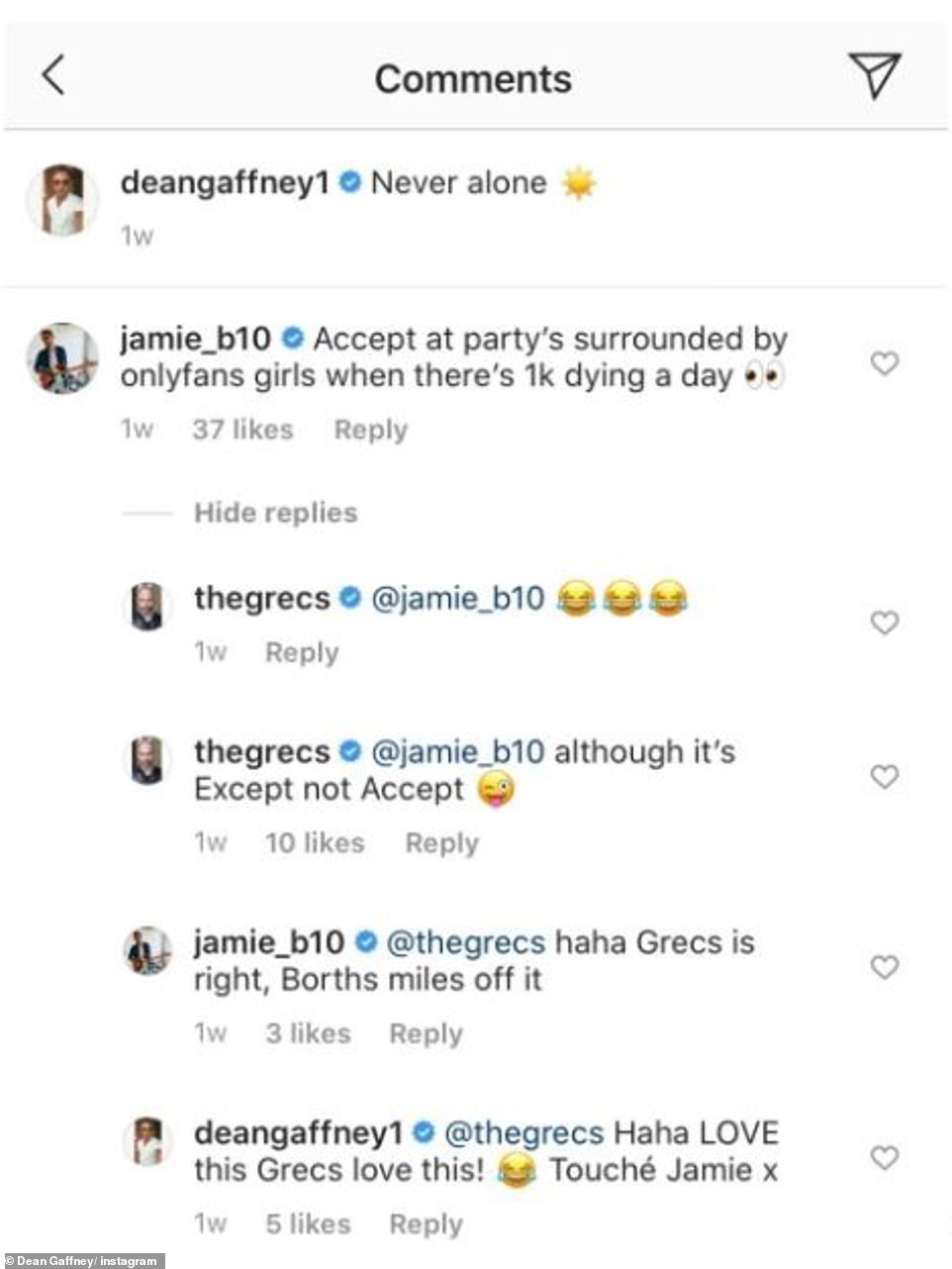 Whoops! Michael Greco, who also used to star in EastEnders, also chipped in on the interaction 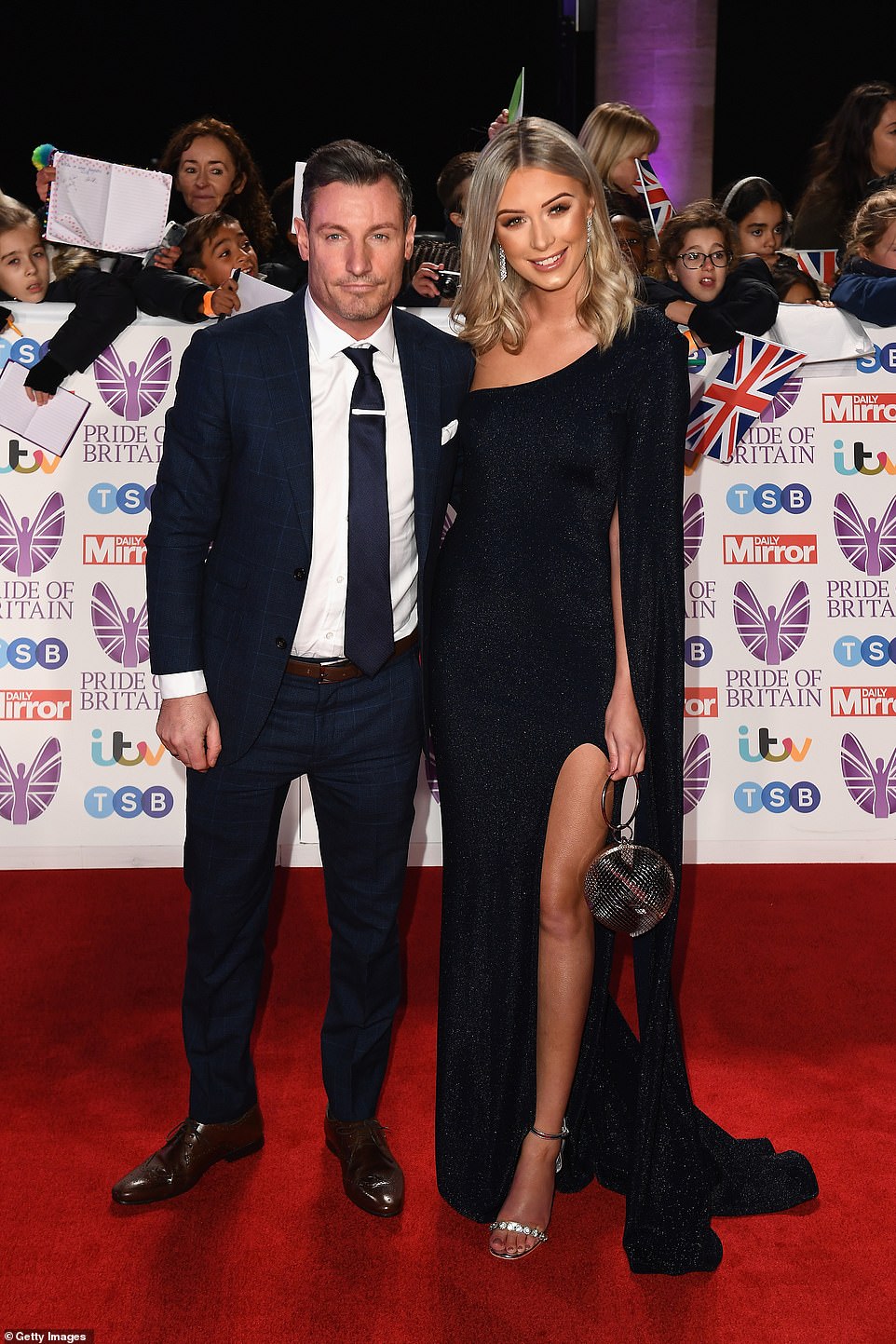 Parting ways: However in March last year the actor was reportedly dumped by his model girlfriend after three years together (pictured in October 2018)

Gordon Ramsay lists his lavish Cornish home for £2.75 million after renovating the BANK into a house

Melanie Hill was spotted stocking up on loo roll, ahead of the government’s looming second national lockdown amid the COVID-19 crisis.

Likely aiming to avoid the scramble for toilet paper that was seen nationwide back in March, the Coronation Street actress, 58, was accompanied by her husband Jimmy Daly as she grabbed herself a huge pack in Manchester on Tuesday.

Her writer and producer husband also had his hands full, carrying a big pack of kitchen rolls as they made their way through MediaCityUK with their purchases. 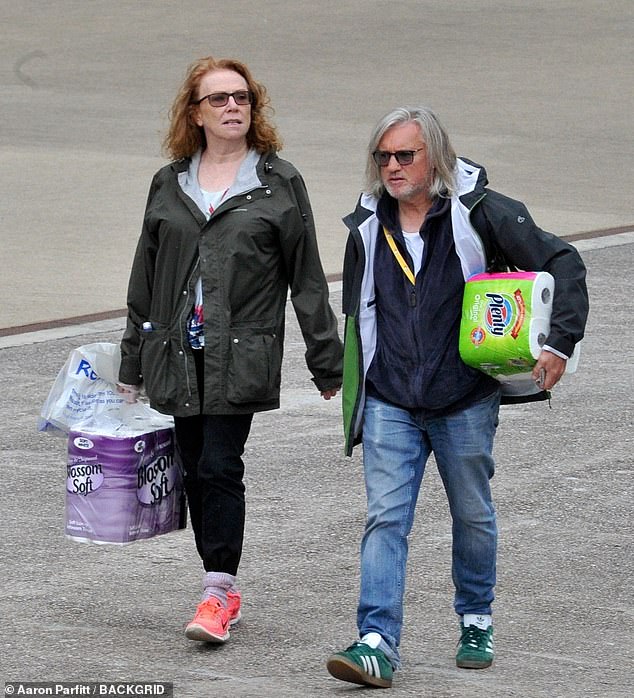 Stocking up: Melanie Hill and her husband Jimmy Daly were spotted stocking up on loo roll in Manchester, ahead of the looming second national lockdown amid the COVID-19 crisis

Melanie, ex-wife of actor Sean Bean, went casual for the outing, donning a dark coat over a patterned top, which she teamed with black jogging bottoms.

Adding a flourish of colour with a pair of bright pink running shoes, the actress wore her fiery red hair in shoulder-length curls.

Donning a pair of tinted spectacles, she walked beside her husband of three years, who wore a black coat with jeans and green Adidas tennis shoes.

Casual: Melanie, ex-wife of actor Sean Bean, went casual for the outing, donning a dark coat over a patterned top, which she teamed with black jogging bottoms

Their excursion came as Prime Minister Boris Johnson made a speech in the House of Commons announcing tightened coronavirus restrictions on Tuesday.

His announcement comes after Chief Scientific Adviser Sir Patrick Vallance said the UK could hit 50,000 cases a day by mid-October and 200 plus daily deaths by November unless Britain changes course.

Melanie, who plays Cathy Matthews, returned to work on the Corrie set back in June, after production was halted for three months due to the COVID-19 pandemic. 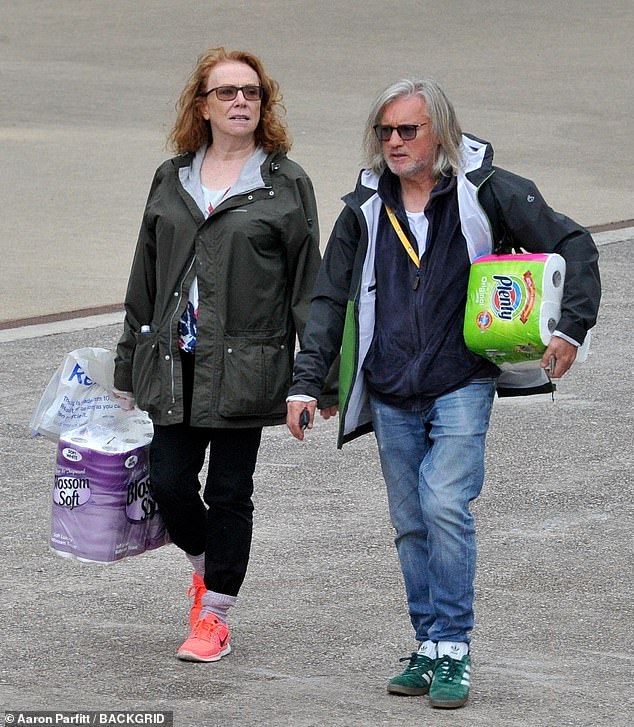 Avoiding the mad dash: The couple were likely aiming to avoid the scramble for toilet paper that was seen nationwide back in March

Cast and crew over the age of 70, or with an underlying health condition, were kept at home during the early stages of production returning.

The new safety measures are in accordance with the recently issued TV production guidelines, which have been observed while filming the top ITV soap.

While the new restrictions include 10pm curfews for pubs and restaurants and people being urged to work from home where possible, it appears that filming schedules for shows will currently remain unaffected. 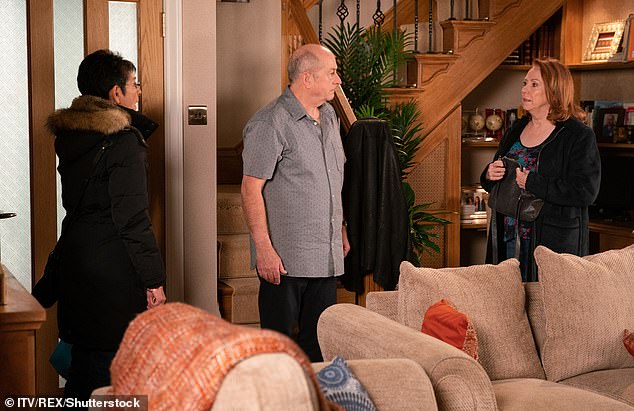 He surprised his social media fans as he posed in front of a fire engine in hi-vis trousers and a red London Fire Brigade t-shirt. 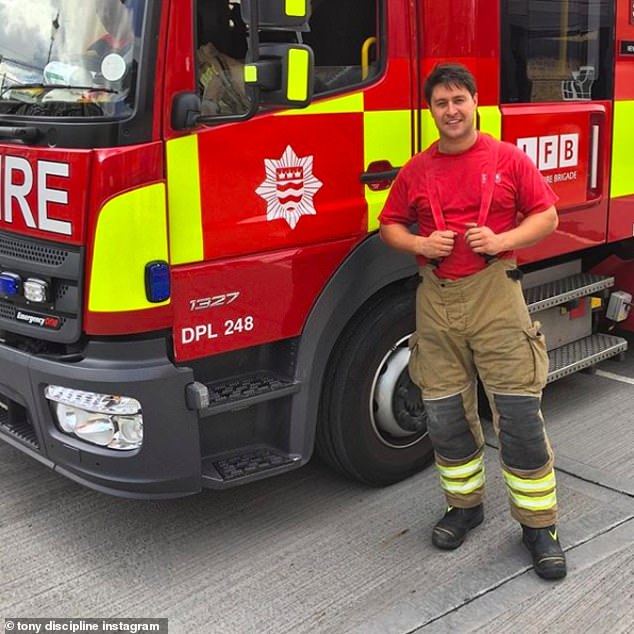 The hunk – who previously dated Jacqueline Jossa – originally revealed his career change to his 10,400 Instagram followers in March, although many believed he was dressed in character for a new role.

Many fans commented under the newest picture of him in his uniform which was taken on September 2, clearly surprised at his new job.

One commented: ‘Are You A Fireman Now Then’, while another wrote: ‘You got a new job, Well done mate’. 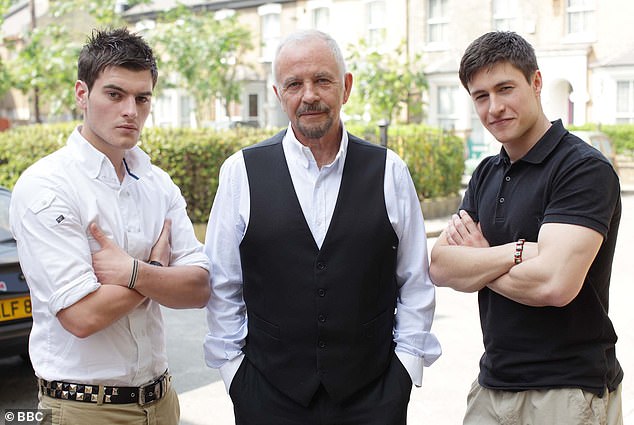 Old days: The actor, 31 played Tyler Moon (far right) on the BBC soap from 2011 to 2013, the cousin of Walford favourite Alfie Moon

Former EastEnders star James Forde, who became a builder after leaving the show, commented: ‘Fair play geeza good on ya! We’ve both gone back down to reality!’

Speaking to Inside Soap in 2017, Tony said he was open to returning to the long-running show.

He said at the time: ‘When it was time to leave the show, I didn’t want to go – however, there were no more storylines for Tyler. 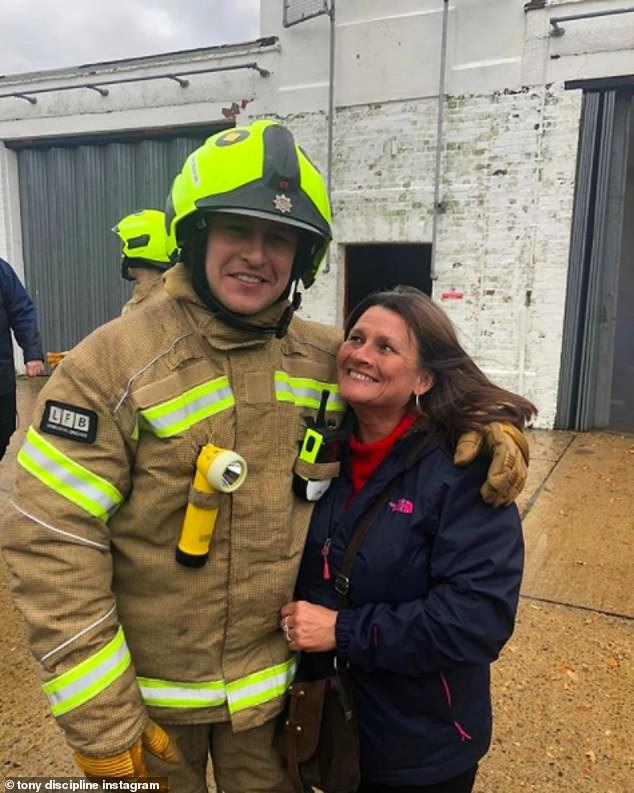 Shock: The hunk – who previously dated Jacqueline Jossa – originally revealed his career change to his 10,400 Instagram followers in March, although many believed he was dressed in character for a new role

Can’t believe it! Many fans commented under the newest picture of him in his uniform which was taken on September 2, clearly surprised at his new job

‘The best thing to do was have him go off on that cruise, but it’s been a blimmin’ long holiday. I think it’s time he came back.

‘When I got the call for EastEnders, it was like winning the lottery. I was working at Billingsgate Fish Market in the day and going to acting classes at night.

‘It was so surreal to go from selling sea bass to being stopped in the street and asked for a picture.’

Tony previously dated Jacqueline Jossa but the couple split in 2013. 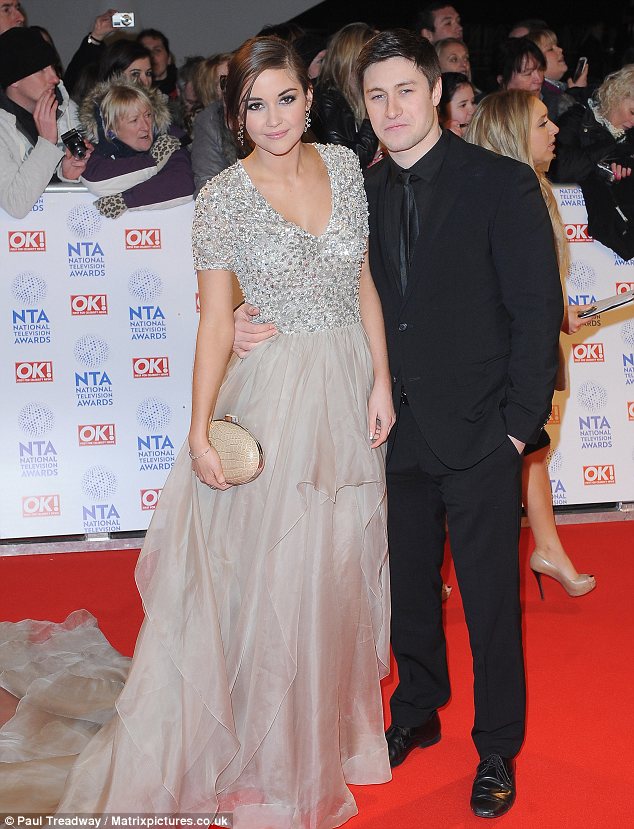 She became a world-renowned model thanks to her striking looks and unique sense of style.

And Adwoa Aboah lived up to her fashion status as she walked through London in a cool mint shirt on Tuesday.

The model, 28, gave mixed messages as she bumped into a pal and greeted him with an elbow tap, before breaking social distancing rules by leaning in for a hug. 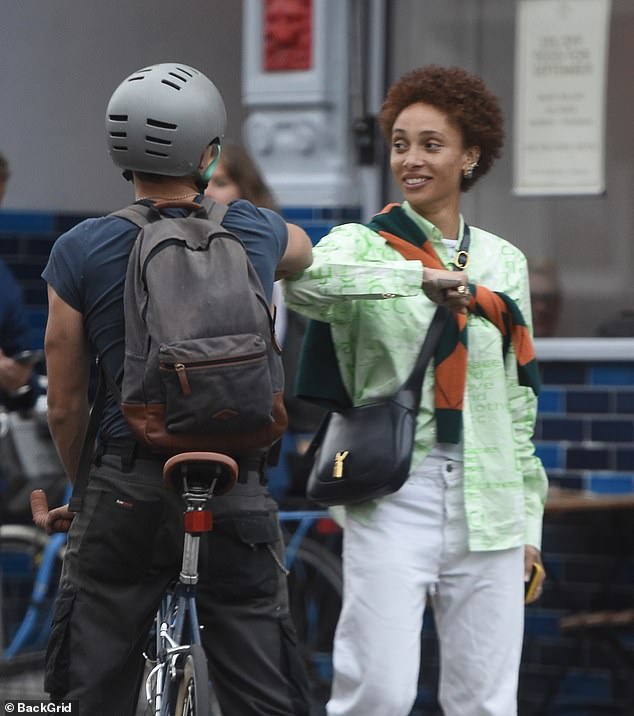 She’s got style: Adwoa Aboah looked like every inch the fashion maven as she walked through London in a cool mint shirt on Tuesday

The pale green shirt, which was adorned with words, sheathed over the model’s slender figure.

The catwalk queen teamed the look with an argyle jumper that draped over her back, white jeans and a classic black satchel bag.
Adwoa styled her auburn tresses in a perfectly preened afro, and she let her stunning good looks shine through with a makeup-free look. 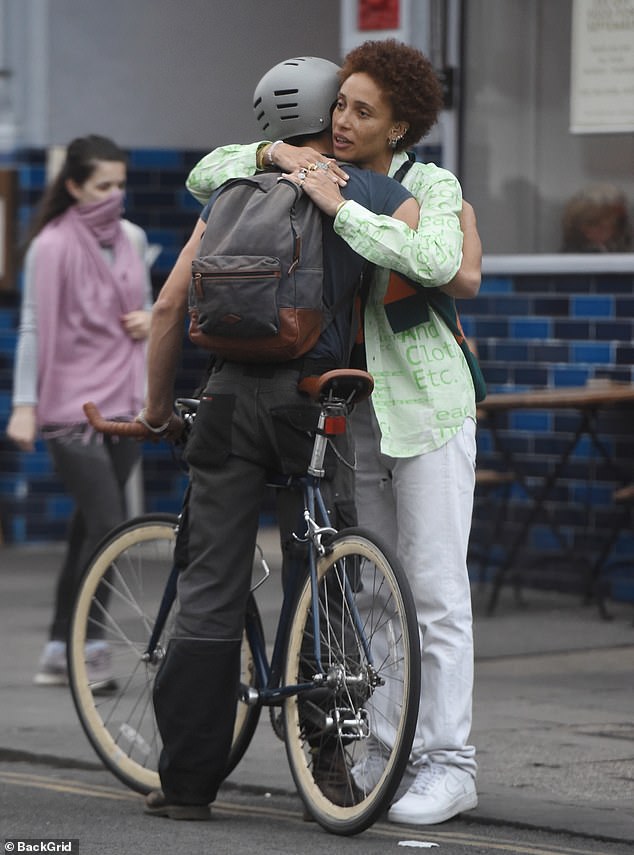 Flouting rules: The model, 28, gave mixed messages as she bumped into a pal and greeted him with an elbow bump before breaking social distancing rules by leaning in for a hug 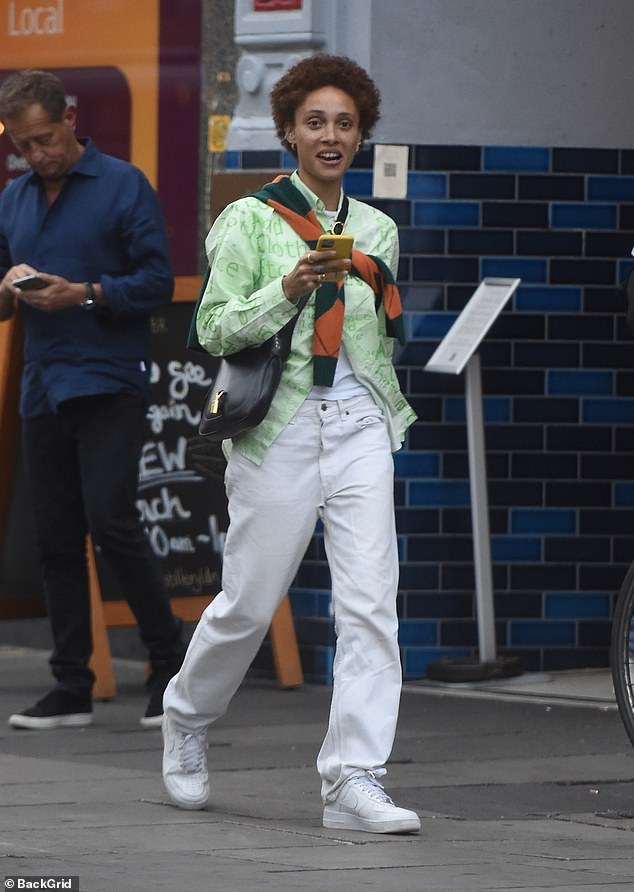 Eclectic look: Adwoa donned a mint green shirt adorned with words, an argyle jumper that draped over her back and a pair of white skinny jeans

The catwalk model seemed in high spirits as she greeted a pal with an elbow bump before flouting the current guidelines with a swift embrace.

Despite her confident and relaxed demeanour, Adwoa recently discussed her insecurities in social situations and and asserted that she felt she ‘wasn’t white enough, nor Black enough’ during her teenage years.

As she graced the September 2020 cover of ELLE magazine, Adwoa confessed to the publication: ‘I’d watch from the sidelines as certain friends flourished in social situations, all carefree and glowing, while I quietly hid my insecurities and internalised my shame.

‘I, like many others before and after me, never felt as though I fit in. I wasn’t white enough, nor was I Black enough. Boys weren’t into my braids, so I conformed – painfully relaxing my hair, which didn’t win them over either.’

On her experience at school, she admitted her strong desire to ‘be like everyone else’ but failed many exams.

She wrote: ‘According to school standards, I wasn’t academically strong, pressure that was only made worse by my dyslexia and the multitude of exams I failed’

Adwoa said she wanted to ‘conform to be like everyone else’, which, ironically, would ‘be a massive detriment to my career today’, but at the time was her ‘deepest fantasy’. 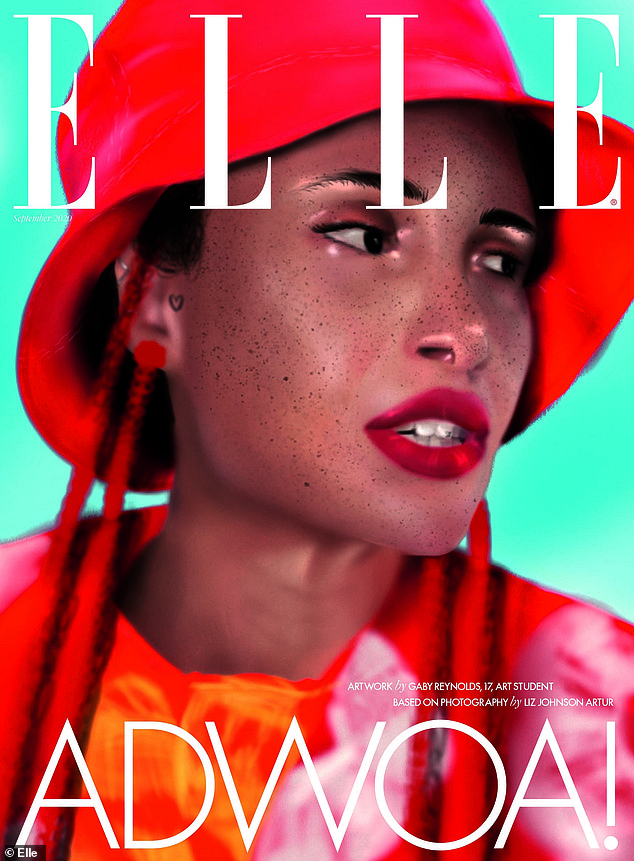 Real talk: The star opened up in the September 2020 edition of ELLE magazine about her  insecurities and how she felt she ‘wasn’t white enough, nor Black enough’