“Why Celebrities Hide Their Relationships” – Kiddwaya

Guernsey goes into lockdown for the first time in seven months

Police were filmed tailing an elderly driver at speeds of just 3mph as she struggled to see past her frosted windscreen, before the ‘world’s slowest’ police chase came to an abrupt halt when she crashed into a traffic bollard.

Officers following the Toyota in Ilkeston, Derbyshire, last Thursday gave a running commentary as they watched the car travel the wrong way around a roundabout and hit a kerb.

Even after sounding their siren and flashing their lights for around a minute, the determined pensioner continued to plod along at a snail’s pace – indicating left all the while.

An officer behind the wheel could be heard saying: ‘World’s slowest fail to stop going on.’ 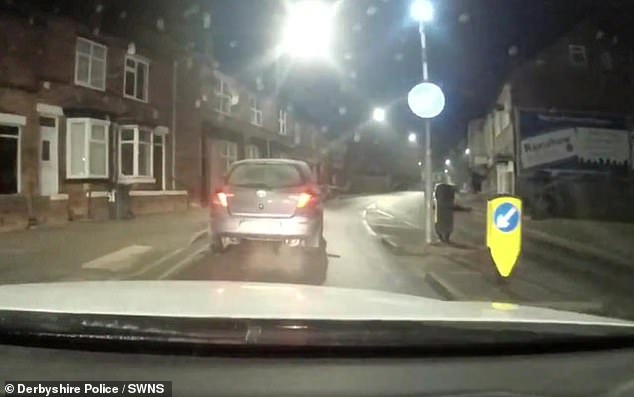 Police were involved in the ‘world’s slowest’ chase last Thursday, reaching speeds of just 3mph. A ‘very old female,’ was behind the wheel at the time

Officers had previously noticed the pensioner’s windscreen had frosted over during the pursuit at around 10.15pm last Thursday.

Seconds later the driver attempts to take a left turn but completely misjudges the angle and goes into a traffic cone.

After the low-speed collision, one police car blocks the Toyota from behind while another boxes it in from the side.

However, the officers are unable to get to the driver before they attempt to reverse backward.

Someone over the police radio can then be heard describing the motorist as a ‘very old female’.

Derbyshire Constabulary said a referral about the incident has been made to the DVLA.

Brazilians OBLIVIOUS to new strain of coronavirus sweeping the country