A 30-year-old British holidaymaker has plunged to his death from an Ibiza beauty spot.

The tourist, named locally as Richard Lloyd Canavan, died instantly after falling nearly 500 feet from cliffs near a lookout point at Cala d’Hort on the island’s south coast.

The alarm was raised around 10pm last night. The Brit’s body was recovered this morning. 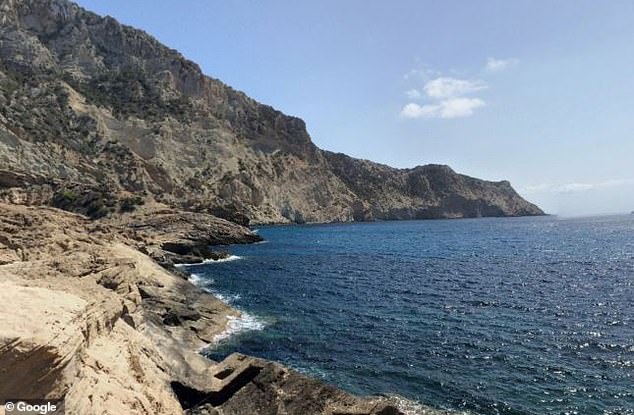 A Civil Guard spokesman said: ‘I can confirm a British man has died after plunging from cliffs in the Cala d’Hort area.

‘The alarm was raised last night and his body was recovered this morning.

‘The incident is still being investigated but there is nothing at the moment pointing to it being the result of foul play.’

A well-placed source said the tourist, who was from Liverpool, had been drinking in the hours leading up to his death. 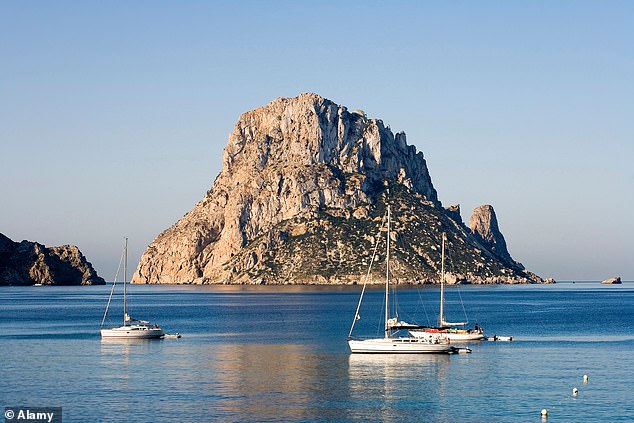 One said a vehicle the holidaymaker and his girlfriend are thought to have been using, had been towed away earlier in the day by local police.

The dead man is understood to have headed to the cliffs with his partner and friends shortly before he lost his life.

Another source said: ‘At one point he headed towards the rocks and grabbed hold of one and was hanging off and the next minute he was gone.’

The spot where the Brit died is popular with locals and visitors who head there to watch the sun go down.

A Sainsbury’s security guard had a painfully boring day at work recently – when he made an ill-advised attempt to jump a barrier.

He spectacularly failed to make the jump and toppled backwards onto his head in what looked like an excruciatingly painful fall.

His attempt was caught on video and has been watched almost 400K times on Twitte – as well as being viewed on TikTok – with users scoring his jump skills and ‘aspiration’. 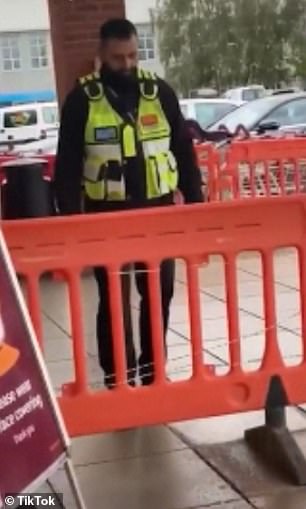 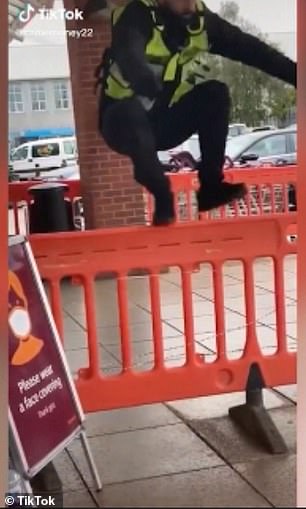 The video shows the security man wearing a hi-viz waistcoat outside an unidentified  Sainsbury’s store.

He stands behind an orange plastic barrier used to funnel shoppers in and out of the store and maintain social distancing.

He readies himself before he makes the jump, as if assessing the barrier’s height.

Then, with a huge athletic effort, he leaps on top of the barrier from a standing start.

However, as the security guard’s feet hit the top of the barrier they slip forwards and he loses his balance.

He flips backwards landing headfirst, as the barrier sways violently back and forwards. 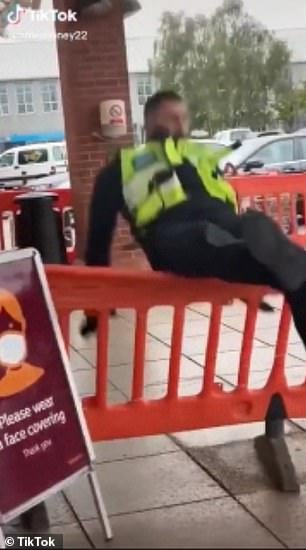 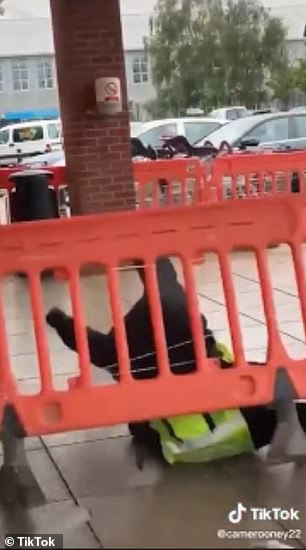 One Twitter user jokingly gave the jump a score out of ten, writing: ‘8/10 on jump height but 0 on the landing.’

Ruth Topham on Twitter, credited the security man’s efforts to scale the barrier, writing: ’10 out of 10 for aspiration.’

However, Tom Pine was more concerned for the plastic barrier involved, joking: ‘I hope the barrier is ok.’

An e-scooter rider in his 50s has his vehicle seized and is slapped with six points on his driving license, after being caught by police driving down a motorway.

The driver was pulled over by officers while on the hard shoulder of the M3 in Hampshire.

He had been spotted joining the southbound carriageway near Eastleigh from the sliproad before police stopped him.

He was slapped with a fine, given six points on his driving licence and had his scooter seized. 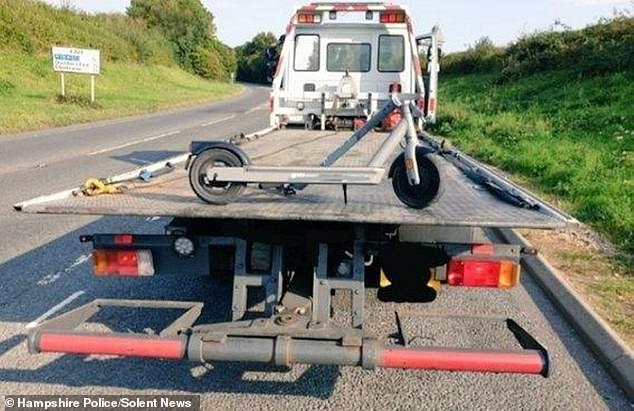 Hampshire Constabulary warned that e-scooters are illegal to use on public roads and footpaths.

A post on the Hants Roads Policing Twitter account said: ‘Unbelievably the rider of this e-scooter thought it was ok to ride on the M3 near Eastleigh…. yes, the motorway!

‘They have been issued with a fine, 6 points on their driving licence and the scooter seized for no insurance.

‘Just a reminder that they are illegal to use on public roads and footpaths unless rented as part of the trial zones.

‘You risk getting points, fine and your scooter being seized if used illegally.’

The Government is currently conducting a trial of electric, or e-scooter, rental fleets in cities across the country with a view to legalisation.

It was reported last week that e-scooters could even be fitted with number plates after warnings that antisocial behaviour related to their use is on the rise.

At least 30 staff at a Wetherspoons pub in Liverpool have been forced to self-isolate after 12 workers have tested positive for Covid-19.

The outbreak among staff at the Lime Kiln in Concert Square has been reported to Public Health England by the firm.

Pub bosses said that they had received no reports of transmission between staff and customers, the Liverpool Echo reported.

They insisted that a ‘rigorous implementation of hygiene standards’ had been in place at the city-centre pub, which remains open. 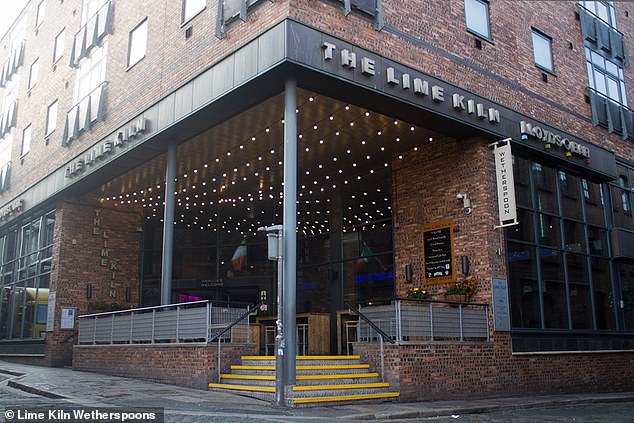 At least 30 Wetherspoons staff at the Lime Kiln (above) in Concert Square, Liverpool, are being forced to self-isolate for 14 days after 12 workers tested positive for Covid-19

A spokesman added that it is believed a ‘private event’ attended by some members of staff outside work may be linked to the outbreak.

The Lime Kiln was told of its first two coronavirus cases among staff on September 16, with the affecting employees being told to self-isolate along with 20 others thought to have been in close contact with them.

Another ten positive cases among staff were identified on September 18 and 19, leading to more employees being forced into self-isolation for 14 days.

Close contact is being defined by JD Wetherspoon as coming within two metres of the affected person for 15 minutes or more, or coming within one metre for one minute or more, a spokesman said.

The spokesman said Public Health England had been told of the initial four cases and would be updated about the other positive test results.

The pub firm have said that they will work with health bosses if any measures are recommended.

NHS Test and Trace have also received the details of the workers who have tested positive after contacting the pub.

The spokesman said: ‘A number employees attended a private event outside of work, which, we believe, may be linked to the cases. At the pub, social distancing rules are in place, which minimises risk of transmission. 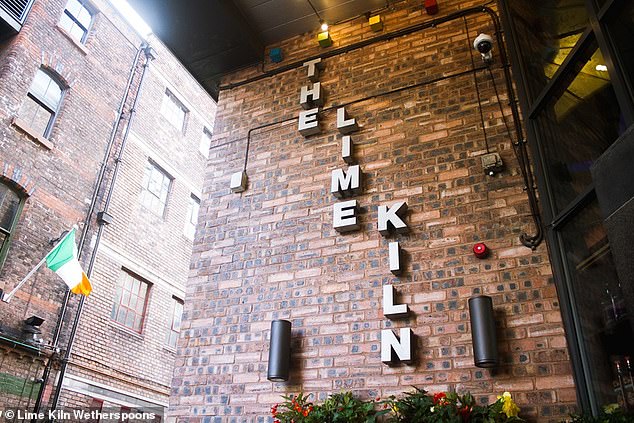 ‘We appreciate that there may be some concerns from customers, but the company has not been informed of any cases of infections being transmitted from staff to customers at the pub.

‘We understand that all the employees who tested positive have experienced mild symptoms and we wish them well.

‘Since reopening, Wetherspoon has operated comprehensive social distancing and hygiene practices in all its pubs.

‘These include; reduced capacity levels, the spacing out of tables, the installation of a number of floor screens between tables and the addition of till-surround screens to the bar. Staff are conducting regular surface cleaning and numerous hand sanitisers have been installed in each pub.

‘While it is not possible to create an entirely risk-free environment, adherence to social distancing guidelines and rigorous implementation of hygiene standards minimises the risk.’