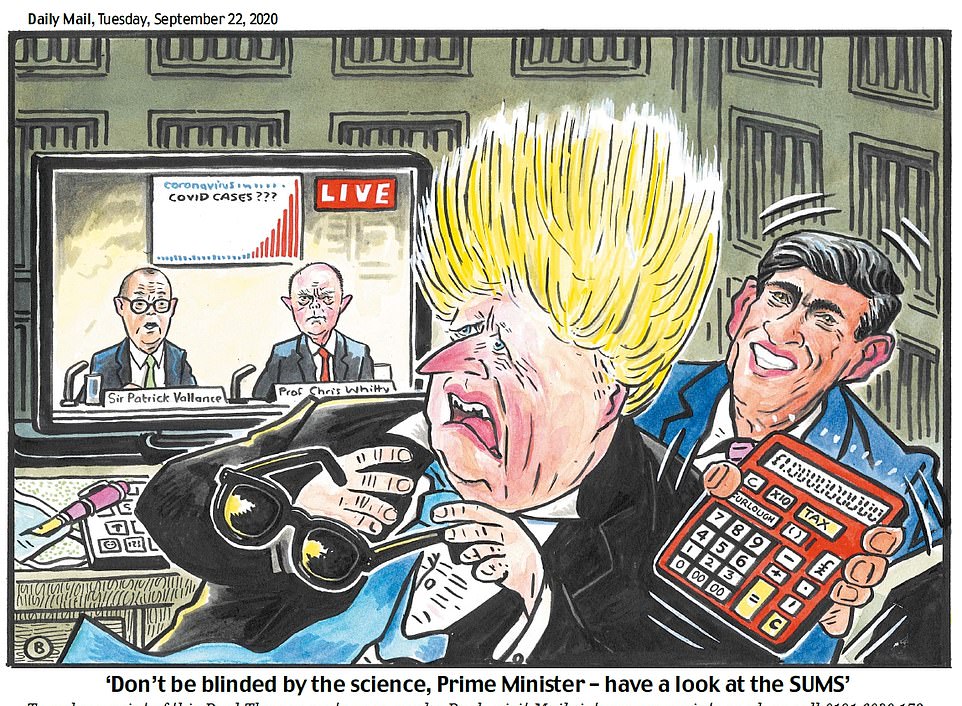 To order a print of this Paul Thomas cartoon or one by Pugh, visit Mailpictures.newsprints.co.uk or call 0191 6030 178.

London‘s drivers could soon be forced to stump up £27.50 each day as part of a Government bailout of TfL.

Sadiq Khan claims ministers are demanding he extends the £15 congestion zone to the North and South circulars as a condition for financial support.

Such a drastic expansion would cover four million more Londoners and may see some motorists charged twice if they also travel through the £12.50 Ultra Low Emission Zone.

The mayor previously suggested he would not accept such conditions and branded the Government’s plans ‘ill-advised and draconian’.

But he is desperate to broker a £5.6billion funding deal to secure TfL’s future for the next 18 months, blaming the pandemic for the transport operator’s financial woes.

However, Boris Johnson yesterday claimed the mayor had ‘effectively bankrupted’ TfL before coronavirus struck and that proposals to hike charges were ‘entirely his responsibility’. 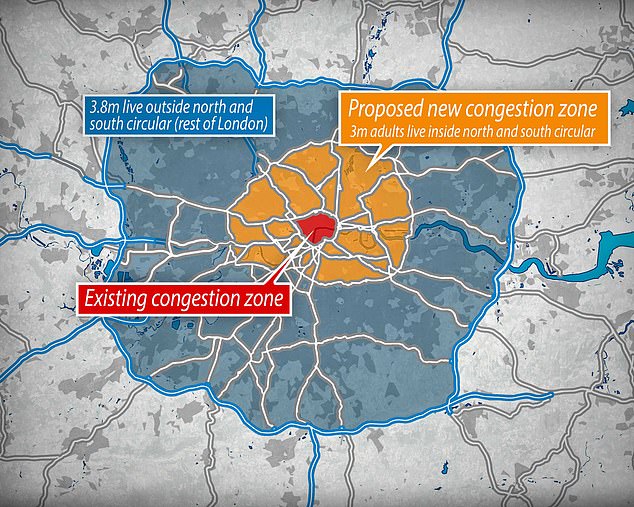 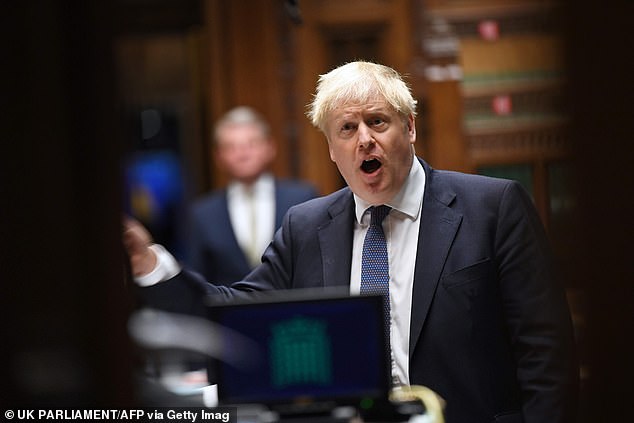 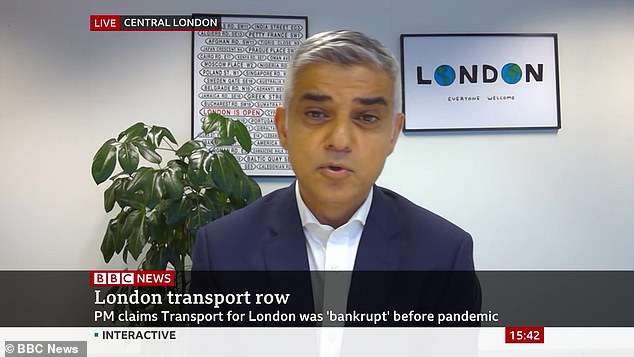 Mr Johnson told the Commons: ‘The current Mayor of London had effectively bankrupted TfL before coronavirus had even hit and left a massive black hole in its finances.

‘Any expansion of the congestion charge or any other measure taken to improve the finances of TfL are entirely the responsibility of the bankrupt current Labour Mayor of London.’

Mr Khan, who succeeded Mr Johnson in the position in May 2016, responded by declaring that the Prime Minister ‘has lied’.

The mayor said: ‘Before Covid I was fixing his mess at TfL- reducing the deficit by 71 per cent since 2016. Covid-19 is the sole cause of TfL’s challenges.’

Mr Khan earlier told a meeting of TfL’s board that he intends to ‘stand firm and fight for a fair deal for Londoners’. 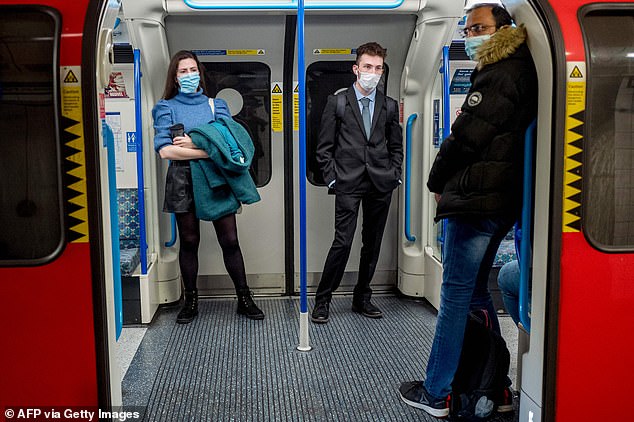 He went on: ‘TfL is being offered only another six months’ financial support, but with ill-advised and draconian conditions that are unfair to London, fall disproportionately on those least able to afford them, would undermine the economic recovery of our city, and contrast starkly with the support provided to the private train operating companies.

‘This global pandemic will be with us for some time. We requested an 18-month support package to see TfL through the immediate crisis and the aftermath, as it is uncertain how quickly fare revenue will recover.’

Shadow transport secretary Jim McMahon said: ‘It’s extremely worrying that despite repeated requests, the Government is offering only a papering-over-the-cracks funding package for Transport for London, with such punitive conditions.’

He commented: ‘Londoners are facing a triple whammy of increased fares, higher council tax and a massive increase in congestion zone charges.

‘The poorest Londoners, who are already struggling financially as a result of losing their jobs or coping with reduced earnings, are the ones who will be least able to afford the increases in fares, charges and council tax.’

Ministers are facing a High Court challenge over the awarding of lucrative contracts under the Operation Moonshot mass testing programme – which was hailed by Boris Johnson as the way to return to normal life.

The Good Law Project, which seeks to enforce government accountability, is seeking a judicial review, claiming the contracts were unlawful because there was inadequate scrutiny before they were awarded. It is due to launch its action imminently.

Government documents reveal that seven contracts worth more than £1.3 billion have been signed with six separate firms.

They are for coronavirus tests using new forms of technology, with the aim to deliver results in minutes, rather than hours or days, and without having to use laboratories.

The Prime Minister last month said the aim of Operation Moonshot was to harness the latest development and vastly increase Britain’s testing capacity.

There were initial suggestions the programme had a £100 billion budget with the aim of delivering 10 million tests a day.

Some of the contracts awarded are with well-established medical diagnostic giants, but one deal – worth £387 million – is with a firm based in Horsham, West Sussex, called OptiGene. Its 2019 accounts state it had assets of just £1.6 million. 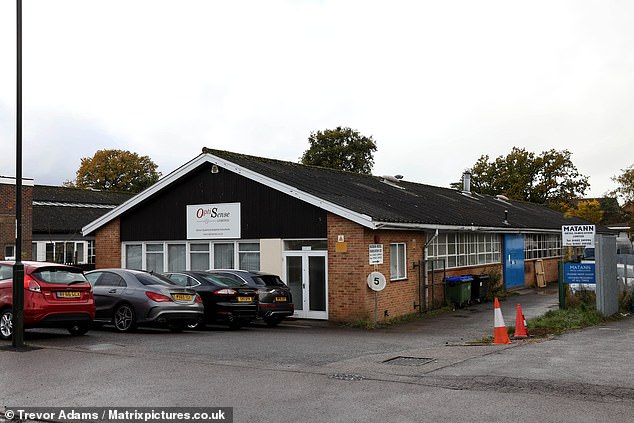 Some of the contracts awarded are with well-established medical diagnostic giants, but one deal – worth £387 million – is with a firm based in Horsham, West Sussex, called OptiGene. Its 2019 accounts state it had assets of just £1.6 million

OptiGene was so small that under company law it was exempt from having to disclose full accounts when it filed them last year.

OptiGene is now contracted to deliver 600 of its newly developed Genie HT machines and 90 million testing kits and chemicals. Each machine is capable of delivering 200 tests an hour.

Chief executive Michael Andreou said he delivered the first of the new machines to a firm in Canada just before the pandemic hit.

He added: ‘I actually said, if we sell ten of those this year, I think that’s doing really well and anything above that is a bonus.’ He declined to disclose how much profit he hoped to make, but said he wasn’t in it for the money.

Other companies at the centre of the legal controversy are: 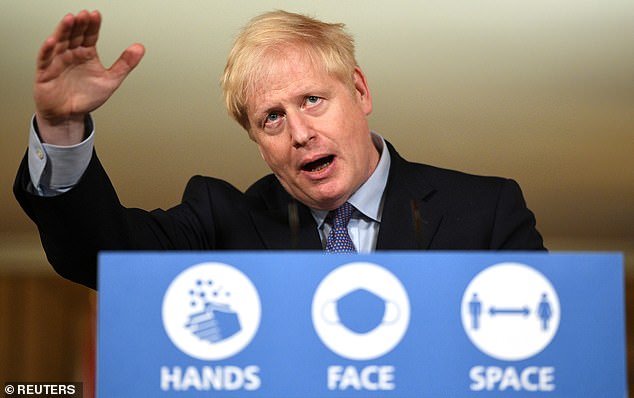 ‘As luck would have it, a pandemic began’

OptiGene is a small medical diagnostic firm based in a single-storey industrial unit in Horsham, West Sussex.

But now, the Mail reveals today, it has hit the big time: a £387million contract with the Government to build and supply 600 Genie HT coronavirus testing machines, together with enough chemicals and kits for 90 million tests.

‘We launched our new machine in January,’ chief executive Michael Andreou said. ‘And then, as luck would have it, a global pandemic began.’

He added: ‘This is a massive challenge for us. It needs everyone to pull together, and components from all over to get these instruments delivered. But we are doing everything possible to get this to happen.’

The company’s machine tells whether someone is positive or negative in 20 minutes, and relies on software to analyse its results. This means that, unlike most lab-based tests, it does not need to be operated by an expert virologist.

Mr Andreou, 59, said that when the pandemic began to spread, he had no intention of getting involved. But then China released the virus’s genome, and he realised he could adapt the Genie to identify Covid.

OptiGene – which operates from the same base as sister company OptiSense, a specialist in sensor systems – tested the machine at Basingstoke hospital. ‘The record for a patient with Covid symptoms turning up at A&E, getting tested and then being admitted to a Covid ward was 20 minutes,’ he said.

In April, Mr Andreou was contacted by the Cabinet Office. ‘I was the world’s worst salesman,’ he said. ‘We never went looking for this contract. You’ve seen from our accounts our normal level of business.’

The Good Law Project, a non-profit group that uses the courts to campaign for public accountability, launched a similar action over the awarding of huge contracts for personal protective equipment. Also joining the action are green energy tycoon and Ecotricity chief executive Dale Vince and medical group EveryDoctor.

They say the Moonshot contracts should have been advertised and subject to open competition. Instead, they claim, they were awarded ‘directly’, with no opportunity for scrutiny – despite the fact they involve new technology untried on a mass scale.

This, say letters setting out their legal claim, breaches the 2015 Public Contracts Regulations, which are supposed to ensure transparency in government procurement.

The claim adds that Operation Moonshot and the contracts have ‘avoided parliamentary oversight’. And it says the National Screening Committee – the official expert body supposed to provide scientific and technological advice to ministers – was not consulted.

In their written response, government lawyers say advertising and consultation were impossible because ‘decision makers were required to make decisions in circumstances of extreme urgency arising from the pandemic’.

The Prime Minister and Health Secretary Matt Hancock launched Operation Moonshot last month. Mr Hancock promised that rapid testing of millions every week ‘will allow people to lead more normal lives and reduce the need for social distancing’. He said it would allow sports venues to reopen with big crowds, and travellers from abroad to avoid quarantine.

Briefing documents published in September suggested the Government was ready to spend £100 billion on Moonshot. But its lawyers say its aims are now more modest. Documents state the new rapid tests come under the existing NHS Test and Trace scheme, led by Baroness Dido Harding, whose total current budget is £12.1 billion.

Good Law Project director Jolyon Maugham insists the group is not seeking to hold up the introduction of faster tests. Its claim says that, although the pandemic does require urgency, the need for faster, mass testing has been discussed since July – allowing plenty of time for advertising the contracts and consulting both Parliament and the National Screening Committee. 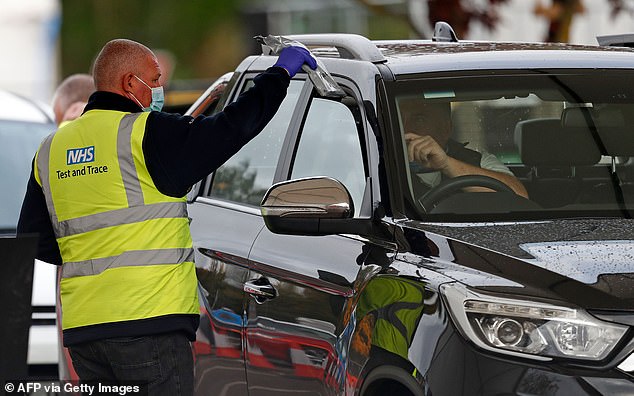 Mr Maugham said: ‘The problems here are universal to everything Government does on procurement, and are around transparency and accountability. The Government is treating the taxpayer as its foe – not entitled to know why and with whom these vast sums are being spent – whereas I think these things are absolutely at the heart of the taxpayer’s compact with Government.’

Dr Julia Patterson, founder of EveryDoctor, said: ‘The Government is failing to listen to experts, failing to provide transparency in their decision-making, and failing to responsibly handle taxpayers’ money. We must learn mistakes from the first wave in order to save lives. This means we must have closer scrutiny of the Government’s spending.’

Mr Vince added: ‘We’ve already seen vast amounts of uncontrolled spending – not least £12 billion for the failed Test and Trace app and countless big PPE contracts to companies with no track record in supplying it. We’ll be paying this money back for decades – it’s real money and needs to be spent in a proper controlled way with transparency and open competition.’

A Department of Health and Social Care spokesman said it could not comment on the pending case.

He said: ‘We continue to work tirelessly to make sure everyone who needs a test can get one, including by introducing new, highly reliable technology to allow us to test more people and deliver rapid results.

‘NHS Test and Trace is the biggest testing system per head of population of all the major countries in Europe. Due diligence is carried out for all government contracts and we take these checks extremely seriously.’

An investigation has been launched after a ‘blood-soaked baby’s hat’ was discovered inside a bag by a dog walker at a woodland park in Scotland.

Emergency services were called to Corstorphine Hill in Edinburgh after the item of clothing was found inside a carrier bag, which was saturated with blood, at around 9.35am yesterday.

Forensic officers, including specialist dog teams, were deployed to the scene to scour the beauty spot and conduct detailed searches. 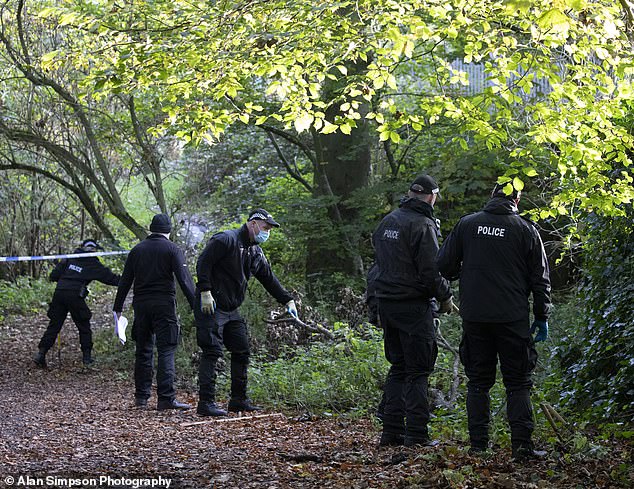 Police officers carry out detailed searchers at  Corstorphine Hill in Edinburgh, Scotland, after the discovery of a ‘blood-soaked baby’s hat’

Police also found ‘a receipt from a Glasgow store’ and a ‘note written in Polish’, The Daily Record reports.

The blood-stained piece of clothing has now been sent to a lab where it will undergo further tests.

A police source told The Daily Record: ‘There was a substantial amount of blood. Enough to cause concern.

‘DNA tests will be carried out while searches are ongoing in case there is more to be discovered. 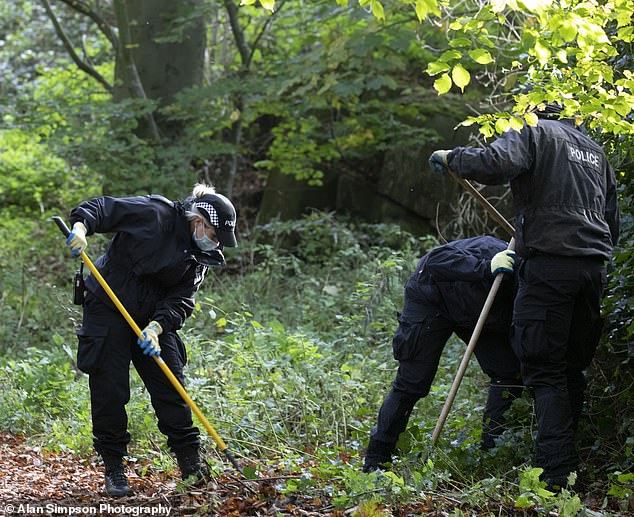 ‘The hat was woollen and had been knitted. The carrier bag was saturated. It was serious enough to cause a huge police response.’

The source added that all avenues needed to be explored and they would need to establish if the blood was human.