Amy Tinkler has launched another scathing attack on British Gymnastics – accusing them of only contacting her when they have been publicly called out.

The Rio 2016 bronze medallist wrote an explosive open letter to the governing body’s chief executive Jane Allen on Wednesday, claiming she was ‘hanging gymnasts out to dry’.

Tinkler’s main gripe was that she had still not received an explanation as to why the formal complaint she made against British Gymnastics and their head coach Amanda Reddin was dismissed last month. 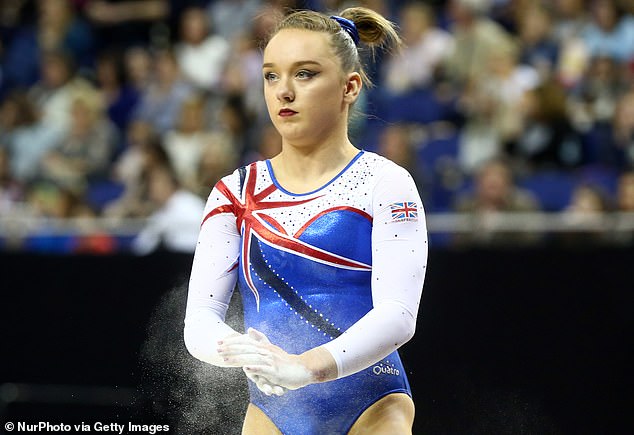 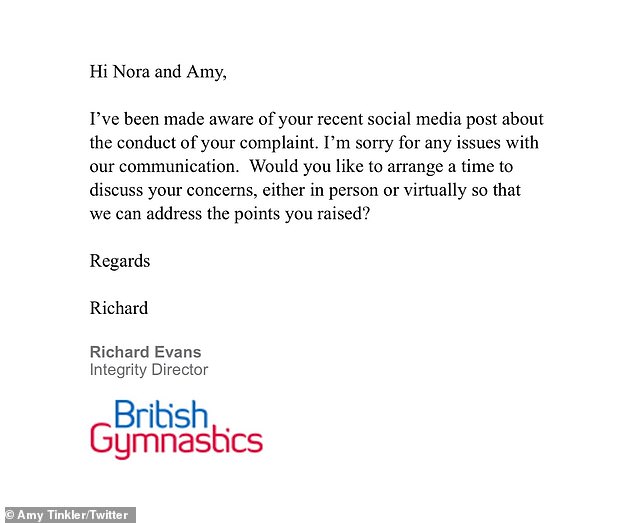 After her explosive open letter to the governing body on Wednesday, British Gymnastics integrity director Richard Evans emailed the 20-year-old and offered a face-to-face meeting 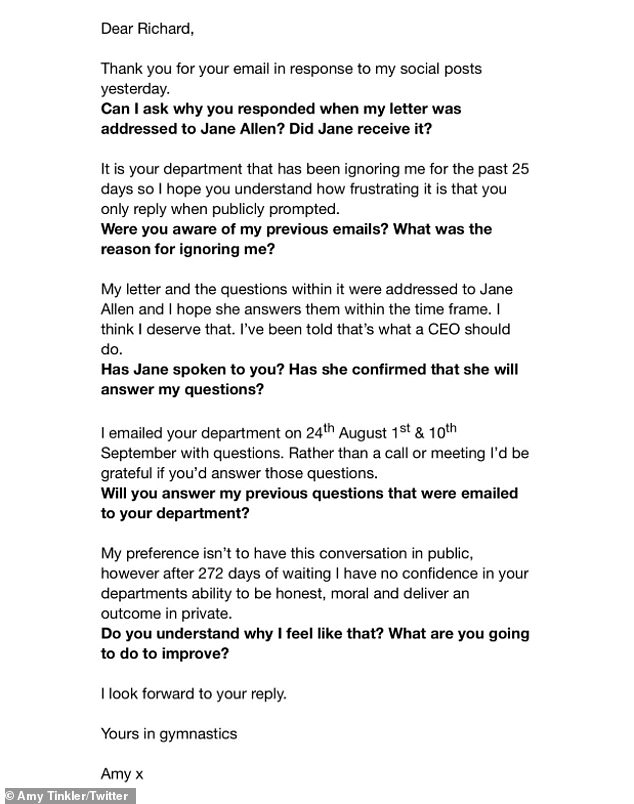 Tinkler responded, questioning why they had not responded to her emails in the last fortnight

But Tinkler has replied to that email in another public post, questioning why it was Evans who contacted her and not Allen, and why the organisation had not responded to her emails in the last two weeks.

She wrote: ‘It is your department that has been ignoring me for the past 25 days so I hope you understand how frustrating it is that you only reply when publicly prompted. 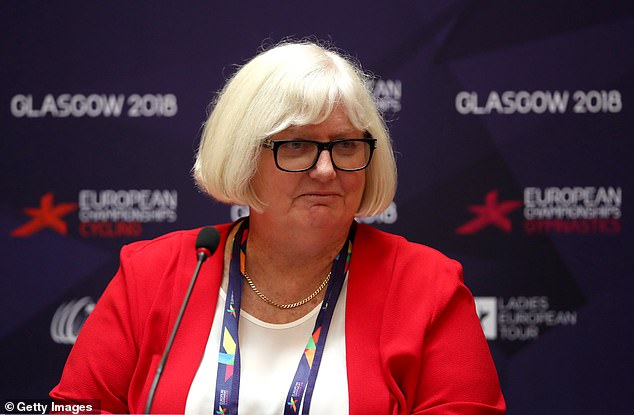 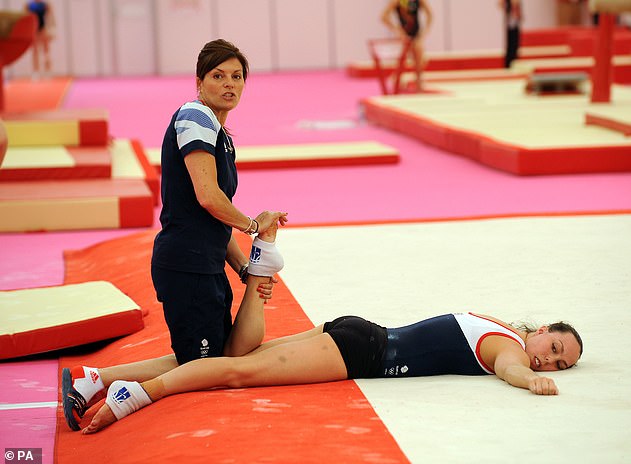 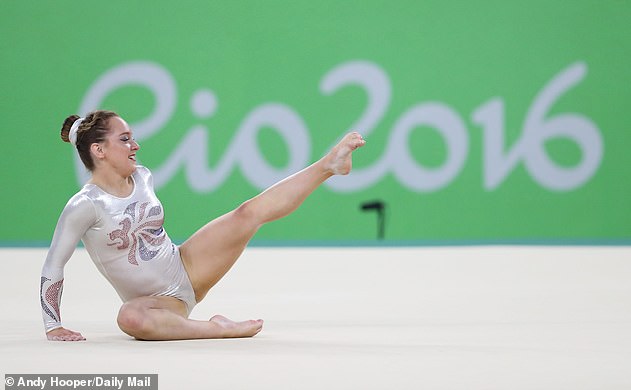 ‘Were you aware of my previous emails? What was the reason for ignoring me?

‘My letter and the questions within it were addressed to Jane Allen and I hope she answers them within the timeframe. I think I deserve that. Has Jane spoken to you?

‘I emailed your department on August 24th and September 1st and 10th with questions. Rather than a call or meeting, I’d be grateful if you’d answer those questions.

‘My preference isn’t to have this conversation in public, however after 272 days of waiting I have no confidence in your departments ability to be honest, moral and deliver an outcome in private.

‘Do you understand why I feel like that? What are you going to do to improve?’ 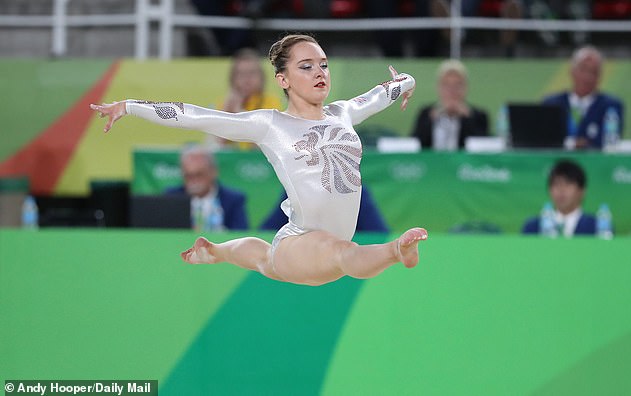 Tinkler was Team GB’s youngest medallist at the Rio Olympics when she won bronze in the floor exercise at the age of only 16.

She quit gymnastics in January this year, a month after she made her formal complaint about mistreatment in the sport.

An independent investigation – the Whyte Review – has been launched into allegations of abuse in gymnastics following a string of complaints this summer.

Lee Johnson always had Bristol City there or thereabouts when it came to the Championship play-offs in the last three seasons – even if they never quite got over the line.

Though it’s early days yet, there are some encouraging signs that Johnson’s former assistant Dean Holden may finally get them there.

They had an impressive hold on this contest, claiming a deserved three points. Most importantly, it is four wins from four in this fledgling season. 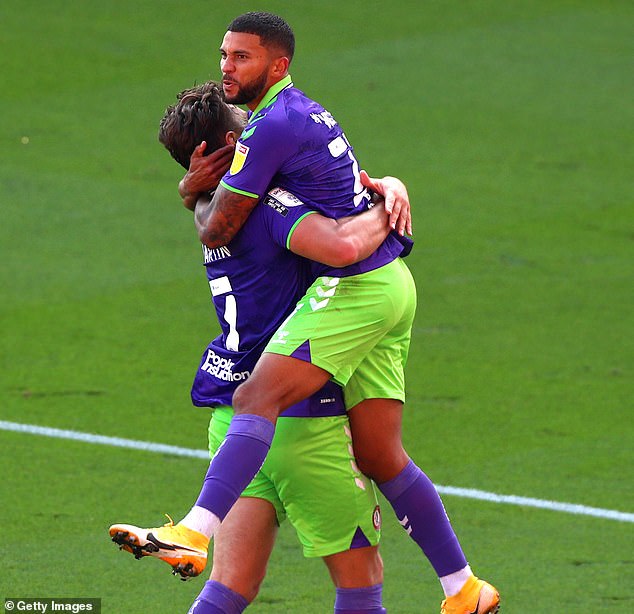 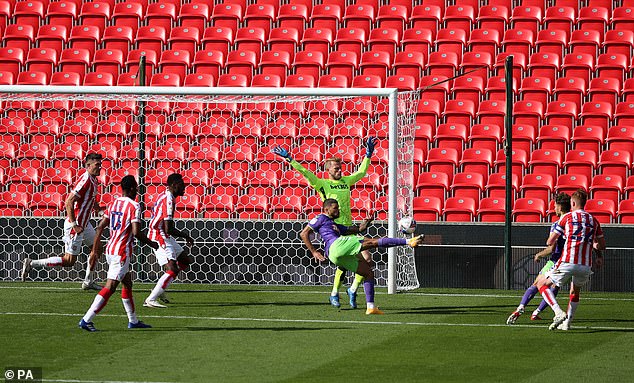 Nahki Wells scored on the stroke of half-time after Bristol dominated the opening 45. The way in which they shut down the game in the second-half was equally as impressive and Andreas Weimann capped a fine afternoon’s work by scoring late on to seal it.

But there are alarming signs that Stoke face a repeat of last season’s relegation strife. They may well have shocked Wolves in the Carabao Cup in midweek but they’ve scored just once in four matches now.

Worse still, the Potters didn’t muster a single shot on target here and Michael O’Neill doesn’t have to search too far to diagnose the malfunctions within his team.

The Northern Irishman looked thoughtful as he chewed gum in his technical area, mulling on a dearth of creativity and probably little chance of rectifying it now on the club’s shoestring transfer budget.

It could well be a long winter and had the Stoke fans been here, there would surely have been vocal frustration at such a toothless performance. You imagine Weimann’s second would have sparked a mass exodus.

By contrast, early round Carabao Cup successes against lower league opposition and last weekend’s league win over Coventry have afforded a bit of early momentum for Holden and his team.

And the visitors wasted little time getting on the front foot here. Stoke boss O’Neill had spoken about wanting to restore the element of fear Premier League sides used to feel coming here and that presumably didn’t mean offering the opposition gifts.

Captain Sam Clucas misplaced an early backpass woefully, giving it straight to Wells who really should have finished but saw his shot blocked by keeper Adam Davies at point-blank range. 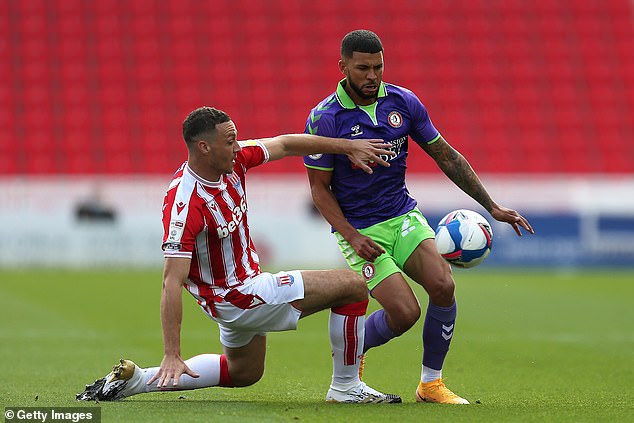 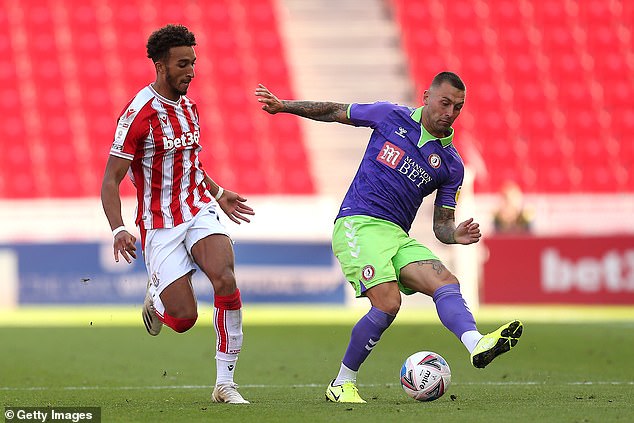 Bristol continued to swarm forward with the lively Weimann skewing an effort high and wide before Jack Hunt’s strike from outside the box whistled over the bar.

With Stoke struggling to gain any kind of foothold, often struggling to play out from the back, Weimann charged forward through the middle unchecked.

Eventually, Nick Powell slide challenged him but the ball popped out to Chris Martin who hammered wide.

Just before half-time, Weimann’s vicious whipped shot from 25 yards needed a touch over from Davies but the away side would ultimately gain the goal their first-half control merited.

Hunt powered a long diagonal from right-back that Martin, a summer arrival to Ashton Gate following his release by Derby, did brilliantly to knock down while sandwiched between two defenders.

Wells still had plenty to do but with his back to goal and keeper Davies looming, he adroitly hooked the ball over his shoulder while swivelling and found the top corner, opening his scoring for the season.

Stoke needed some spark from somewhere and O’Neill introduced summer signing from Sheffield Wednesday Steven Fletcher for the ineffective Sam Vokes up top.

But it just didn’t happen, with Bristol largely comfortable in the second-half without creating the chances of the first.

The final 10 minutes saw a belated flurry of pressure. Tommy Smith curled an effort that was deflected over but Stoke’s attackers really need to do better and the visitors duly broke to settle it.

Weimann applied pressure on Danny Batth and won the ball, leaving Stoke exposed with just one defender as the Austrian and Antione Semenyo advanced. Semenyo squared to an unmarked Weimann to sweep home.

Ulster crashed out of the Heineken Champions Cup to Toulouse, a week after losing to Leinster in the PRO14 final.

Kolbe showed his class at the beginning and end of the first half as he twice stepped inside Irish wing Jacob Stockdale to round off sweeping moves. 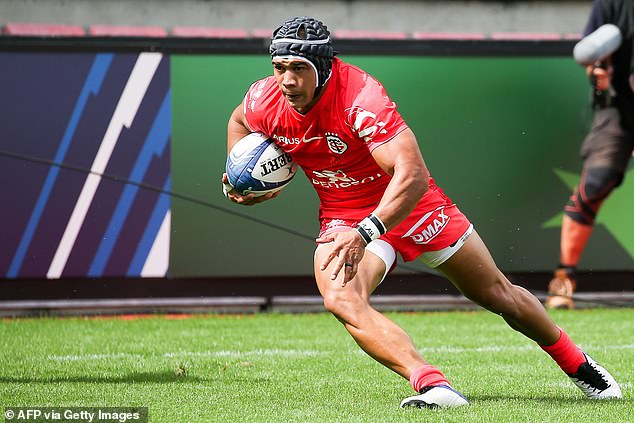 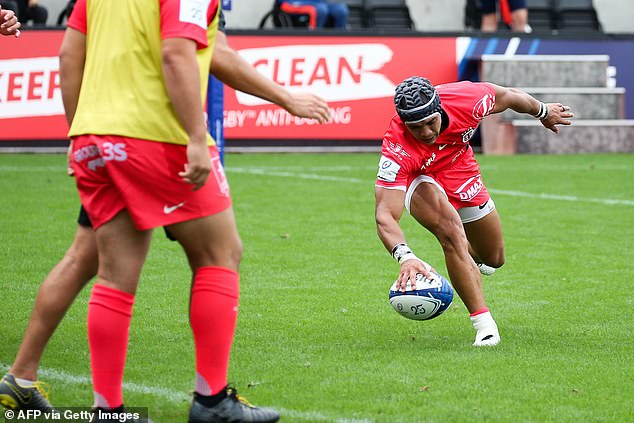 His first try came after two-and-a-half minutes as the four-time champions exploded into action in front of a 5,000-strong home crowd.

Wave after wave of attacks eventually put Kolbe one on one with Stockdale and the Springbok came off his dynamic right foot to step inside his man and score the first of Toulouse’s five tries.

That score came while Ulster centre James Hulme was receiving attention after being bowled over by a charging run by former Connacht centre Pita Ahki.

Toulouse dominated territory and possession in the opening quarter, but could not turn their pressure into points. 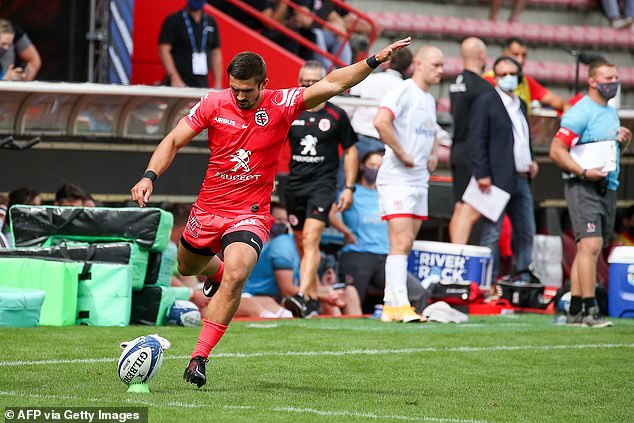 It certainly helped the Ulster cause that home full-back Thomas Ramos missed with the conversion and then two more penalties after making it 8-0 with a 14th minute penalty.

Ulster showed four changes from the team that failed in Dublin the previous weekend but welcomed back scrum-half John Cooney into the starting line-up.

Head coach Dan McFarland went with a 6-2 split of forwards to backs on the bench and – after losing outside half Billy Burns to a calf strain in the first half, and centre Stuart McCloskey after the turnaround – they ended up with a full-back at number 10 and a scrum-half on the wing.

But despite being hit with that blistering start, Ulster dug deep and a penalty from Cooney in the 26th minute put them right back in the contest. They also managed a number of line-breaks but could not manufacture the final pass to make them pay. 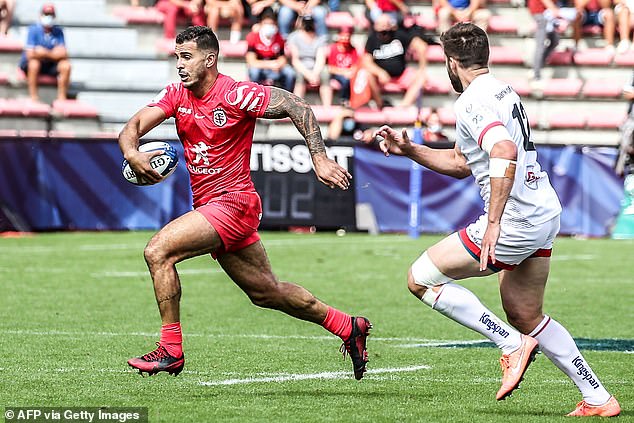 Kolbe showed his fancy footwork once again as he outwitted Stockdale for a second time and Ramos’ conversion made it 15-3 at the break. Three more tries flowed in the second half as the lead grew to 33 points.

Two of the tries were made by charging runs from centre Sofiane Giteau, paving the way for the outstanding French scrum-half Antonie Dupont and Ramos to score. Ahki got the other with a neat kick and chase up the left touchline.

Cooney grabbed a consolation try nine minutes from time for the visitors. 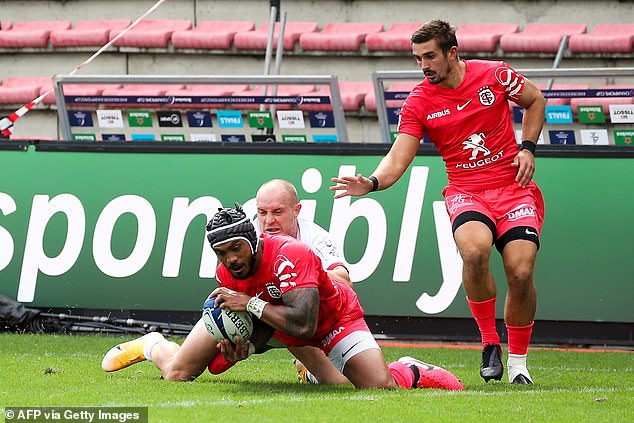 The 27-year-old – who has been at the club since 2016 – has been heavily linked with a switch to Old Trafford on a five-year deal.

Ole Gunnar Solskjaer’s side are back in for the Brazilian defender having missed out on Sergio Reguillon to Tottenham.

A fee of around £18million has been rumoured to be the price Porto are willing to do business at.

Italian journalist Fabrizio Romano has revealed that United have been in contact with Telles’ agent, with the player to push to leave.

He tweeted on Saturday: “Manchester United priority: left back and right winger. Possible also a CB.

“Tonight #MUFC have been in contact again with Alex Telles agents. He will push to leave Porto on next few days. Man Utd are monitoring and considering an opening bid.”

But Telles has insisted that he is only focusing on his future at Porto after scoring twice for the club in the 3-1 win against Braga.

The ex-Inter Milan loanee told Sport TV: “I’m a guy who focuses a lot on work, people believe what they want, say what they want in the newspapers, but the most important thing is to be focused on my work.

“You know that and so do my teammates, whatever happens, I’m focused on the club, I’m here, I’m playing.”

Asked if he was close to leaving, he added: “I have people who work for me, I just have to focus on what my job is.

“If I knew anything, I wouldn’t need to have people working for me.

“I have people who take care of that and I have to focus on my work.”