Both Brit heavyweights are now waiting for the all-clear on fans being allowed back into arenas.

And the race is on to see which fighter gets in the ring first in December.

Matchroom boss Hearn said: “It looks like Fury vs Wilder 3 is December 19, so we will most likely go on December 5 or 12, to give ourselves as much time as possible.

“AJ would probably want to go at the end of October or middle or November.

“But, for the sake of three or four extra weeks of training, it isn’t worth rushing.

“You need to remember you are only going to box once this year.

“AJ’s good, he gets it. He knows the numbers that he would have got for boxing in June.”

Joshua was eager to fight on one of Hearn’s four Fight Camp back-garden shows that are kicking off on Saturday night.

But Watford’s WBA, IBF and WBO king rakes in around £5million in ticket sales per show.

And even his mega-money sponsorship deals could never fill that void.

Hearn, who in June helped broker terms for a potential 2021 clash bet­ween AJ and Fury, explained: “He’s not suffering for a few quid.

“So AJ needs to progress his career in the right way and, more importantly, prepare for the Tyson Fury fight.

“Pulev, coming off a year lay-off, is really good preparation for Fury.

“Not stylistically, but just to get in with a big heavyweight, get that big momentum, hopefully score a big knockout and move forward into that fight in 2021.

“How are we going to get round that? Pulev take less? AJ take less? Maybe condense the card a little bit?

“Maybe get 2,000 people in somewhere to pay premium-price seats?”

AJ held his rematch win over Andy Ruiz Jr in Saudi Arabia and Hearn himself has a partnership with the controversial state.

But, until they get better Covid-19 results, the Essex salesman is considering all other options.

Hearn said: “I am in discussions with somewhere and it is not dissimilar to Fight Island.

“But, at the moment, anywhere in the world has a problem — even, using an example, Saudi.

“They were due to hold major events this year, but at the moment they are not looking to do that until early next year.

Five formations to fit Werner, Ziyech & Havertz into as Chelsea near third deal

“It would be quite nice to not worry about the pressures of the crowd for AJ and just do it in a territory that is up for investing in a site fee.

“But all the countries are not at a stage where they can confidently say, ‘Yes, we will make an investment for a November or December fight as we know we’ll be fine’.

Chelsea boss Frank Lampard insists he knows Kai Havertz’s best position and that his role in the side will become clear when he reaches full fitness following the £89million man’s slow start to life in the Premier League.

Havertz played wide on the right on his debut against Brighton and was then used centrally in the 2-0 defeat against Liverpool before being hauled off at half-time as Lampard brought on a defender following Andreas Christensen’s red card.

Jamie Carragher questioned how the club’s record signing fits into Chelsea‘s system after his low-key displays. 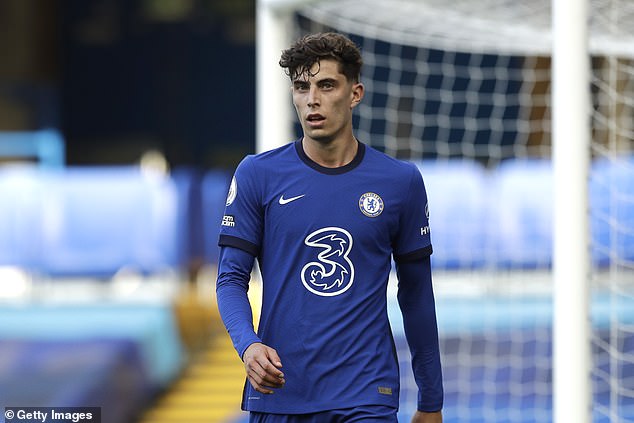 But Lampard – who was determined to land Havertz this summer – has no doubts about the 21-year-old’s role in his team.

He told a press conference on Tuesday: ‘Kai has played various positions in career, as number nine, number eight and a number 10.

‘He played lots off the right for Leverkusen and I have my own vision going forward.

‘The key now is getting him fit.

‘Kai, with the situation we are in we aren’t in a position where we can wait. We need to get him fit, and it’ll become very clear why he’s here.’ 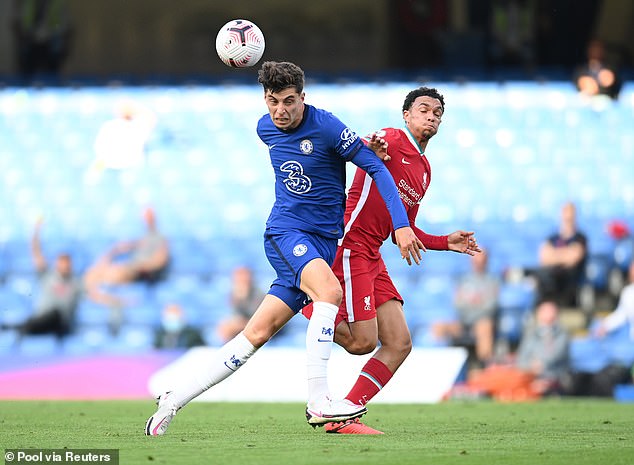 Chelsea have attacking quality in abundance with summer arrivals Timo Werner, Hakim Ziyech and Mason Mount and Christian Pulisic all capable of playing in various positions across a front three.

And former Liverpool defender Jamie Carragher admitted he is unsure how Lampard could best utilise Havertz after watching him against Liverpool.

‘He almost looks like a No 10 and we don’t see them as much in football now. Where he played today, I don’t think that suited Chelsea.’ 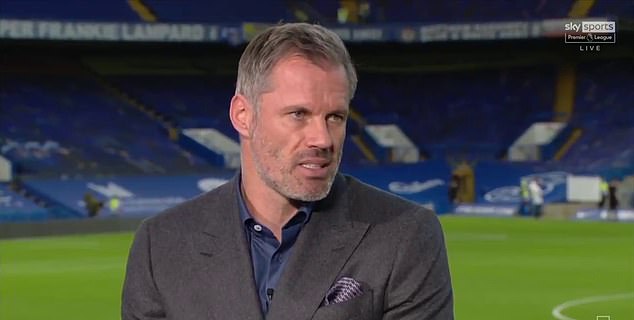 Havertz has played on the right wing in both of his Premier League matches as a Chelsea player even though he earned his big-money move after impressing through the middle in Germany.

He scored 38 goals in 87 matches for Leverkusen and mainly played as either a centre-forward or an attacking midfielder, also known as ‘No 10’.

Jamie Redknapp believes that Havertz is more of an attacking midfielder and sees his Chelsea future in that position, though claimed fans need to be patient if they want to see the best of the German international at Stamford Bridge.

The Sky Sports pundit claimed: ‘You’ve got to give Havertz time. We have to be careful. We’re judging a player. You’ve got (Christian) Pulisic and (Hakim) Ziyech to come in (as well). 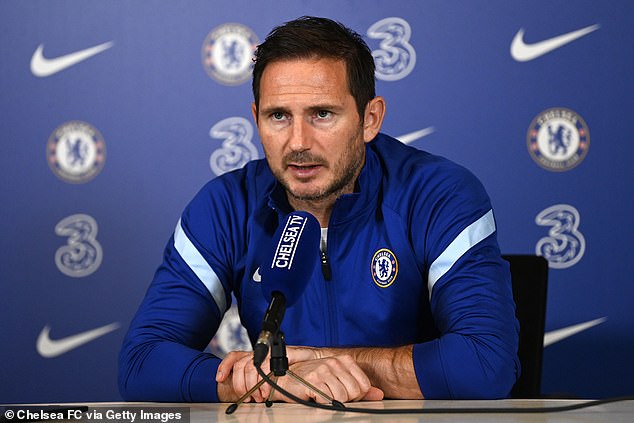 ‘I think Havertz is a No 10. With the three they played in midfield today, you need a bit more craft.

‘Are we sitting here and questioning Havertz, he’s been here two minutes?’

Fellow pundit Ashley Cole, a former Chelsea defender who now works for the west London club in the youth set-up, added that one of Mateo Kovacic or Jorginho will have to be scrapped if Havertz does make the transition to attacking midfield.

‘New players coming in, it’s a process. The new players will have time to gel. Kai Havertz trained four or five days.

‘If you want to shift Havertz in a No 10 position, then somebody’s got to go. Perhaps Jorginho or Kovacic.’ 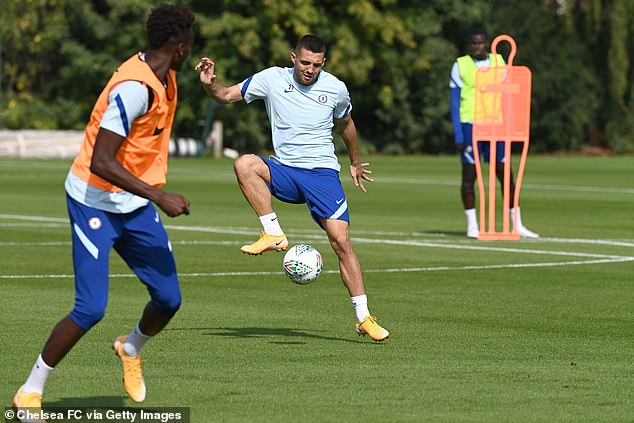 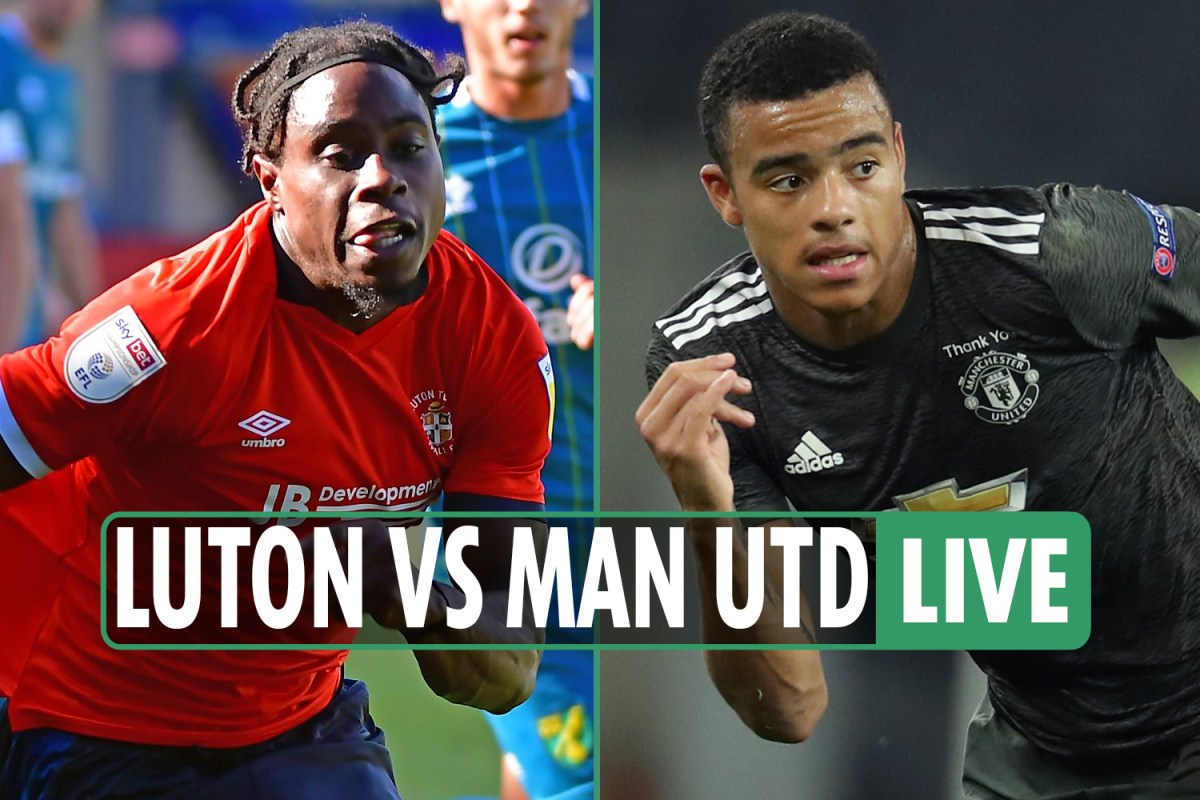 Ole Gunnar Solskjaer’s side were beaten by Crystal Palace at Old Trafford in their first game of the Premier League season and will look to get back to winning ways tonight.