Ronald Koeman has demanded Ousmane Dembele to report for extra training sessions while his Barcelona team-mates have been given four days off, according to reports in Spain.

Dembele, a devastatingly direct winger when fit, has been a long-standing source of frustration at the Nou Camp, having suffered injuries and off-field issues since he joined in 2017.

Finally free of injury, the Frenchman has not featured for Barca since last November, when he pulled up in the 25th minute of a clash with his former club, Borussia Dortmund. 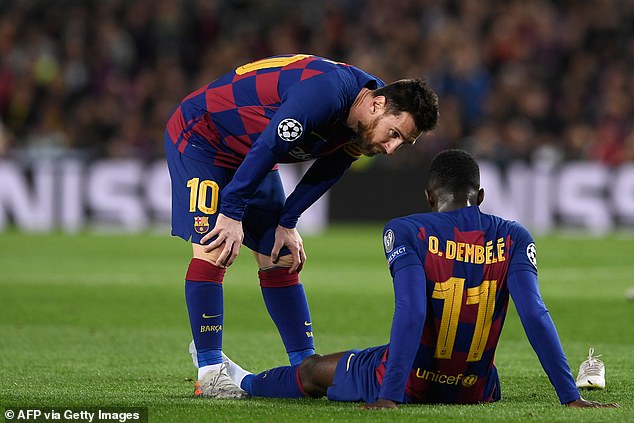 Now, while the rest of the Barcelona squad have been given time off during the international break, Dembele has been put through his paces on the training ground.

‘Dembele did not go voluntarily to train, but they were duties that Ronald Koeman had set for him,’ said Spanish journalist Lluis Canut, while speaking to Esport 3.

Canut believes the extra sessions indicate that Koeman is desperate to rehabilitate the multi-million pound flop.

‘It was not a punishment training session, but a session to recover the training he had pending at the beginning of the season, when he was injured and could not carry out the necessary workload,’ Kanut said, as reported in the Spanish publication, Sport. 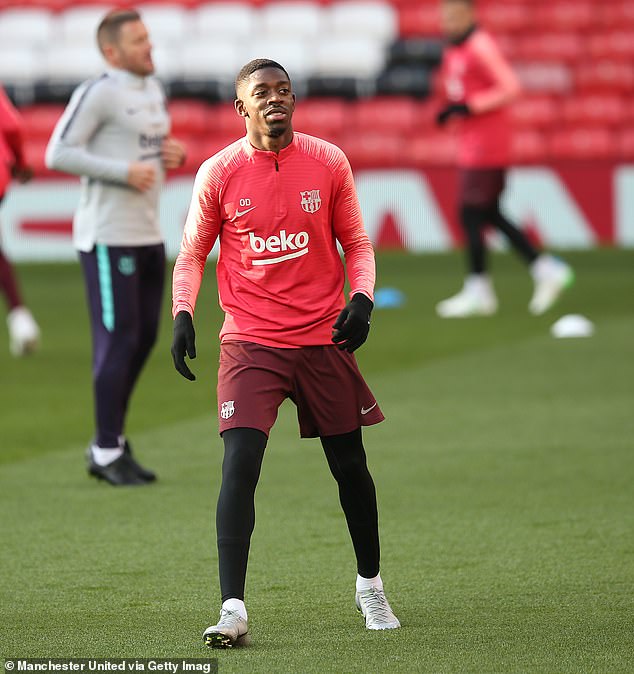 ‘If this is the first step for Koeman to recover the figure of Dembele, it is welcome.’

And the winger wants to impress his manager to win back his place.

Koeman has favoured Philippe Coutinho, Ansu Fati and Antoine Griezmann in the early stages of his tenure, while he has inherited a financial embarrassment for the club in Dembele, whose contract runs to 2022.

Barcelona paid £96million to Borussia Dortmund in 2017 for Dembele and they are currently making their way through additional add-on payments.

Despite being the sixth all-time most expensive signing, Dembele is reported to have played just 25 per cent of possible minutes since his arrival, but the fact he has still managed 52 Barcelona appearances, scoring 12 goals with 11 assists underlines his huge potential. 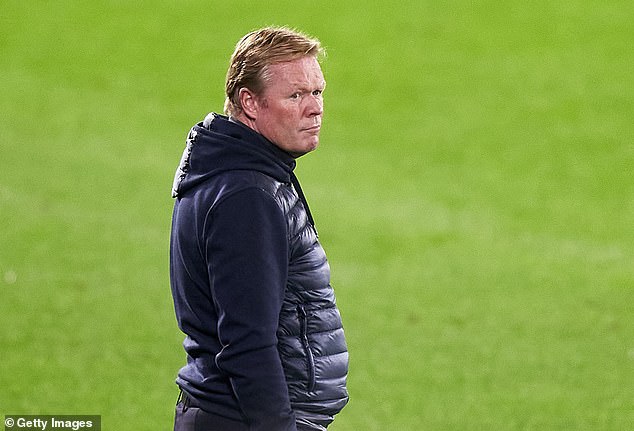 Koeman has been desperate to rehabilitate Dembele since a move to Manchester United fell through during the recent transfer window, with the Red Devils put off by the price tag

Dembele was linked with a £54m move to Manchester United during the transfer window, although the Red Devils had preferred a loan option with a commitment to buy. Any chance of a move collapsed on deadline day.

Once that did not materialise, Koeman was left with no choice but to bring the player back in.

But even when fit, Dembele has proved a challenging player to manage. 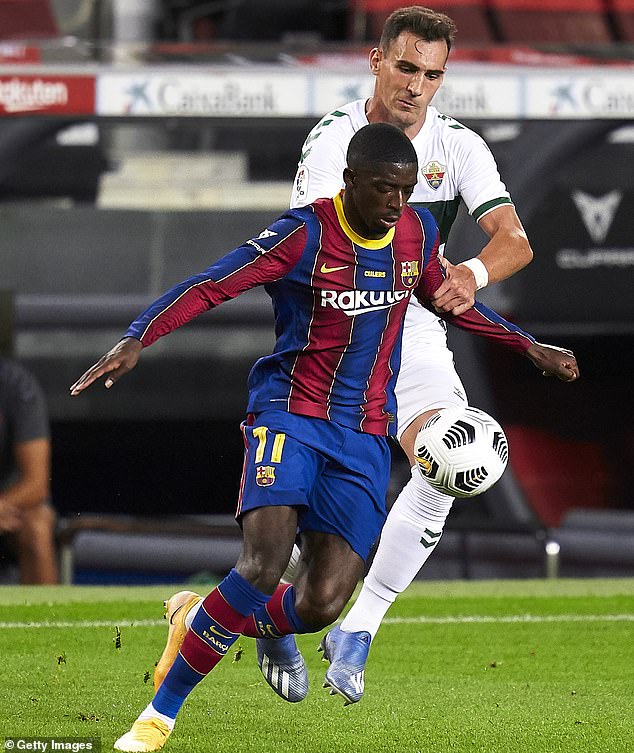 When fit, Dembele is a pacy, direct winger who’s scored 12 goals for Barca in 52 appearances

It is not the first time that the former Dortmund winger has had issues getting to the training ground on time. During the 2018 campaign, Dembele failed to show up to training after oversleeping.

Following that incident, the club placed strict measures on the talented attacker – including banning late-night video gaming sessions and ensuring his phone is kept on and not on silent.

Dembele was once fined £90,000 in the wake of another late arrival to training, when he turned up two hours after the deadline.

‘The players have lost their way’: Ex-Manchester United defender questions the team’s ‘identity’

Novak Djokovic is beginning to put his French Open disappointment behind him with an opening round win at the Austrian Open.

The world number one has not played since his Roland Garros trouncing by Rafael Nadal earlier this month, where he won just nine games in the final.

He is back in action in Vienna and cruised past fellow Serb Filip Krajinovic 7-6 (6) 6-3. 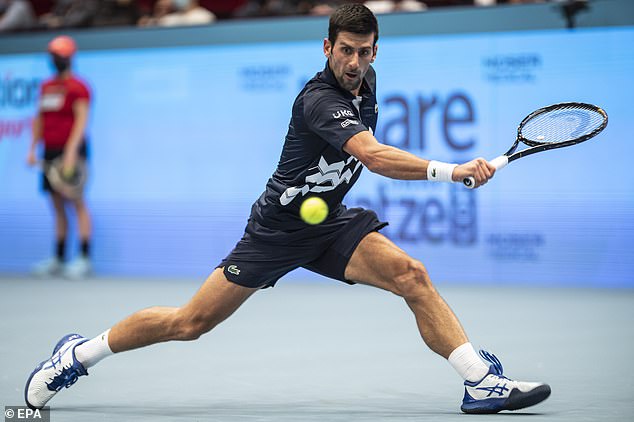 ‘I was lucky in the first set… we are good friends, we train a lot (together) and it is never easy to play someone that you are very close to,’ said Djokovic in an on-court interview.

‘He is a very nice guy and I have known him since he was very young. I followed him, I tried to be there as a friend, as a mentor. We go back a long way.

‘We practised a few times (together) before coming to Vienna. The draw was tough for us to face each other, but there is always extra pressure and importance to a match when you play someone that you know very well.’ 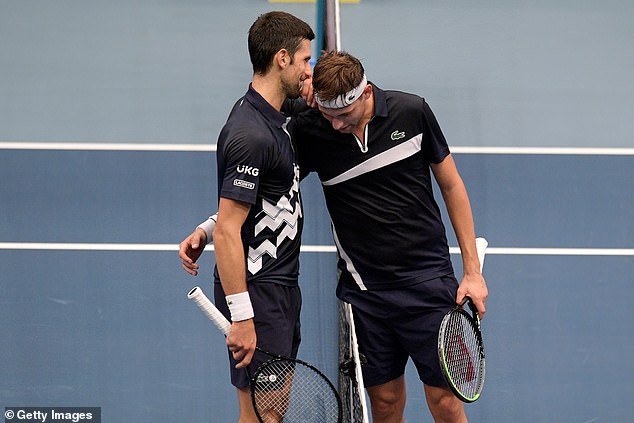 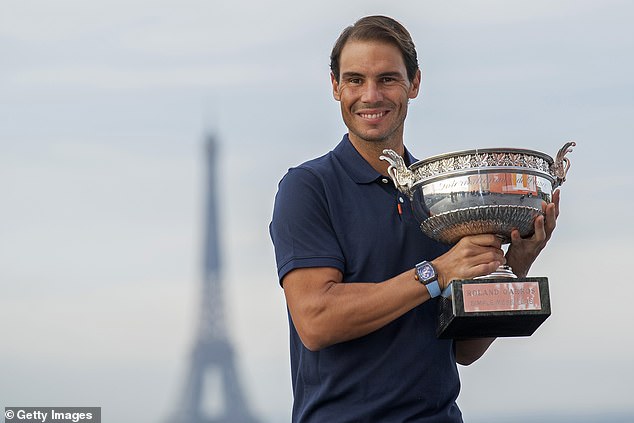 The US Open champion Dominic Thiem, a beneficiary of Djokovic’s disqualification in New York, also progressed on home soil.

The Austrian was too good for lucky loser Vitaliy Sachko, winning 6-4 7-5.

That was the same scoreline by which compatriot Jurij Rodionov stunned eighth seed Denis Shapovalov.

The Canadian was downed by the world number 153 in a match he would have expected to win.

Fifth seed Andrey Rublev made smooth progress, beating Norbert Gombos 6-3 6-2, while Grigor Dimitrov came out on the right side of a tough match with Karen Khachanov, winning 7-6 (6) 6-3.

There were also wins for Kevin Anderson and Borna Coric, while Pablo Carreno Busta and Dan Evans were the beneficiaries of retirements as their respective opponents Gael Monfils and Aljaz Bedene pulled out with injuries.

Stan Wawrinka was beaten in three sets by Cristian Garin in the late match.

Liverpool boss Jurgen Klopp insisted his side’s 2-0 Champions League win over FC Midtjylland was not as comfortable as the scoreline suggests, admitting it was ‘a really hectic game’.

The German left big name stars like Sadio Mane, Mohamed Salah and Roberto Firmino out of the starting XI for the clash at Anfield as he looked to manage his squad and maintain fitness levels, but his new-look side still got the job done.

Goals came from Diego Jota and substitute Salah from the penalty spot as the Reds secured victory in the second half, and Klopp said the match was ‘tricky’ and that the away side caused them problems with their relentless pressing. 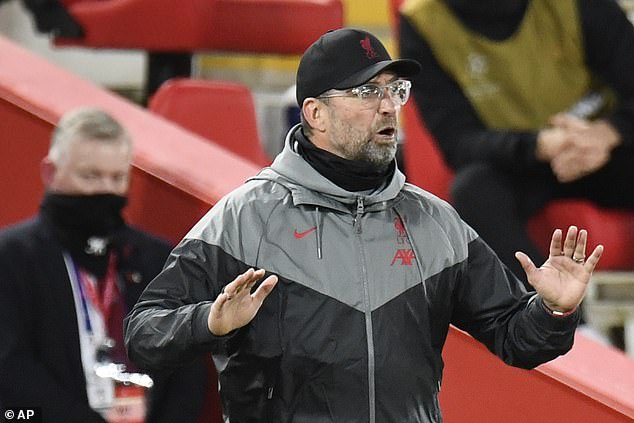 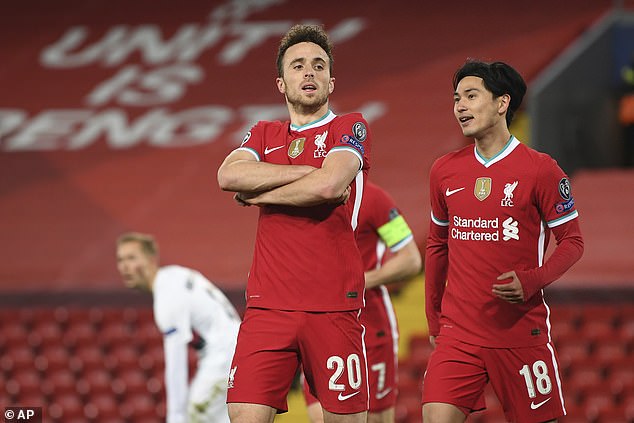 ‘We made a lot of changes and it’s my job to decide obviously, I have all the information of what the boys did,’ he told the club’s official website.

‘But for different reasons again, the game was really tricky. They pressed like crazy, they made a really hectic game of it and we couldn’t calm it down in the decisive moments. 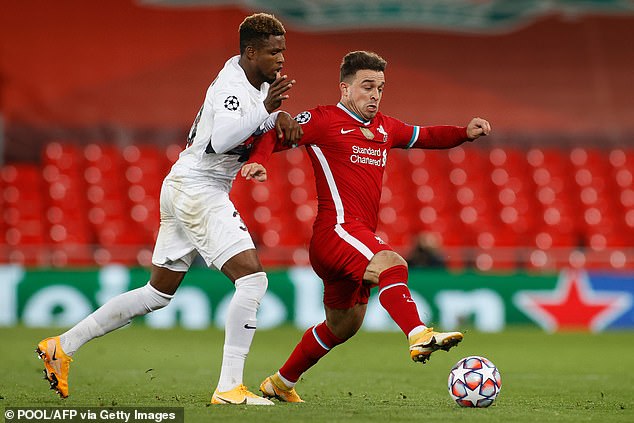 ‘You saw when a team defends like them then you need your patterns and we didn’t show them tonight. That doesn’t help.

Liverpool got their goal against a stubborn Midtjylland just after the interval thanks to a slick passing move between Trent Alexander-Arnold and Xherdan Shaqiri, with Jota finishing well, and Klopp said he wanted to the team playing with that kind of confidence throughout.

‘We scored a goal anyway in probably the best football moment where we really passed through exactly like we should have. They had really big chances – two or three. Then, you just have to fight and that’s what we did. It’s like in a marriage, it’s in good and in lesser good times, you have to stick together.’ 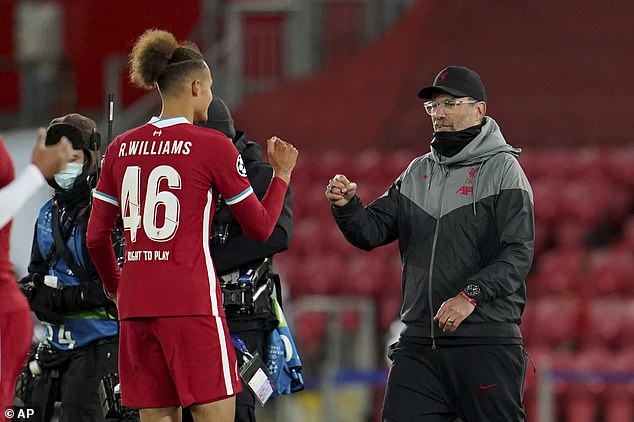 Without a number of his usual senior group to call-upon, coupled with the loss of makeshift centre-back Fabinho, Klopp had to rely on fringe stars such as Minamino, Origi and Shaqiri, as well as young prospect Rhys Williams.

He singled out the 19-year-old for praise, but with the youngster now looking in contention to feature against West Ham on the weekend, he said it was up to him to deal with the pressure to succeed.

‘He did really well. The only problem we have now is unfortunately we have four days to the West Ham game and you will make every day a story of him and then he has to prove he can deal with that as well because before everything was calm around him.’

Schools are evacuated during HSC biology exam after threatening emails