Brigid Kosgei fell short of another world record but maintained her dominance of women’s marathon running with a convincing win in London on Sunday.

In pouring rain, the Kenyan defended her London Marathon title in two hours, 18 minutes and 58 seconds. For around half the race, the 26-year-old was on course to add Mary Keitany’s 2:17.01 record for an all-female race to the 2:14.04 world mark she set in the mixed-sex marathon in Chicago last year.

But the pace slowed in the dreadful conditions, costing the event the uplift of a record after all the chaos of its staging. 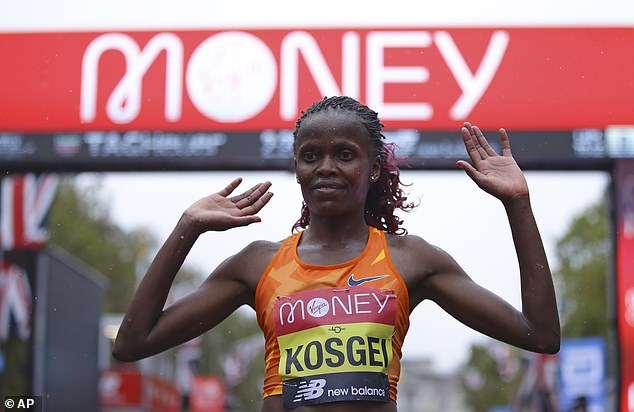 Brigid Kosgei defended her marathon title with a time of two hours, 18 minutes and 58 seconds 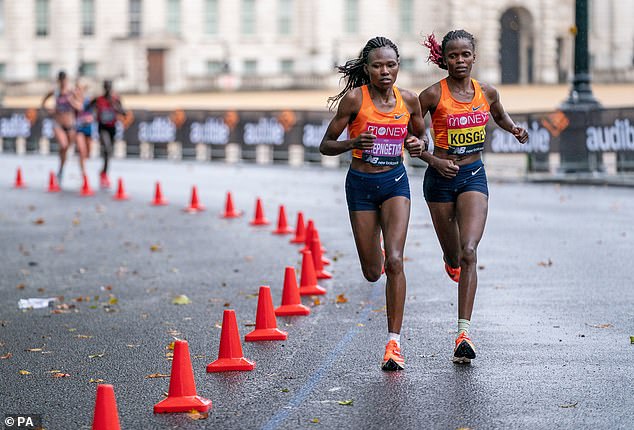 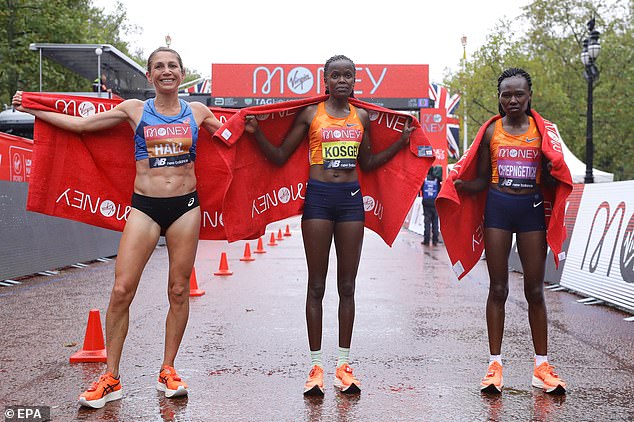 For more than two-thirds of the race it was even at the front between Kosgei and the world champion Ruth Chepngetich, with their pair having burnt off Valary Jemeli after 10 miles.

The decisive break from Kosgei came around the 29km mark. She quickly opened a 10-second lead in the race, and ultimately crossed in 2:18.57 with a winning margin of three minutes and three seconds from Sara Hall of the US, who passed Chepngetich in the final 100m. Hall, an Asics athlete, disrupted the Nike dominance of the distance. 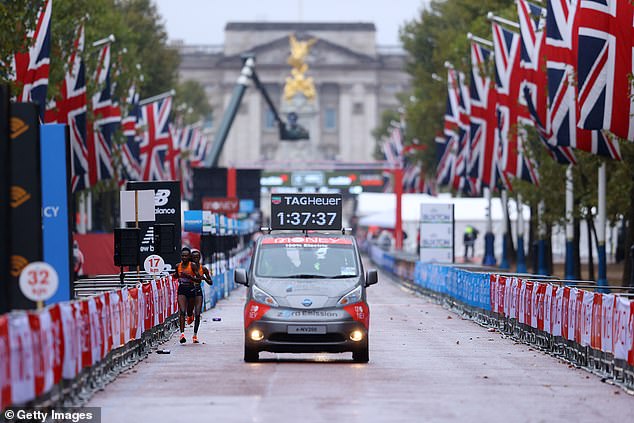 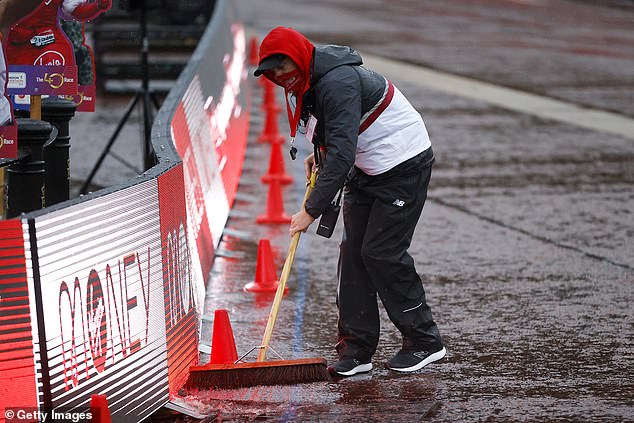 Kosgei said: ‘The weather is not good. So we struggled. It’s wonderful to race. We have not prepared well due to the pandemic.

‘I struggled up to the moment I finished. I will be well-prepared for good results next year.’

Natasha Cockram was the leading Brit in 13th, finishing 2:33.19, which was outside the Olympic qualifying standard. 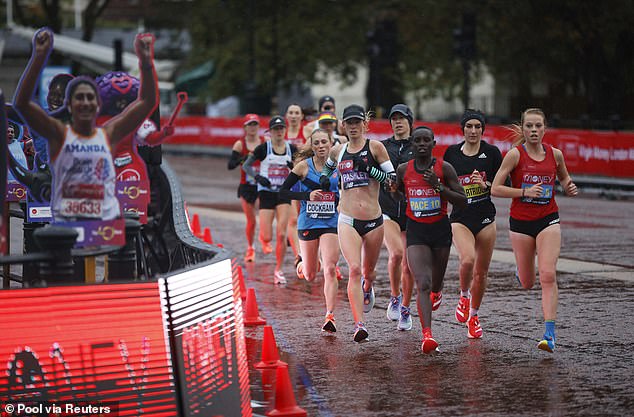 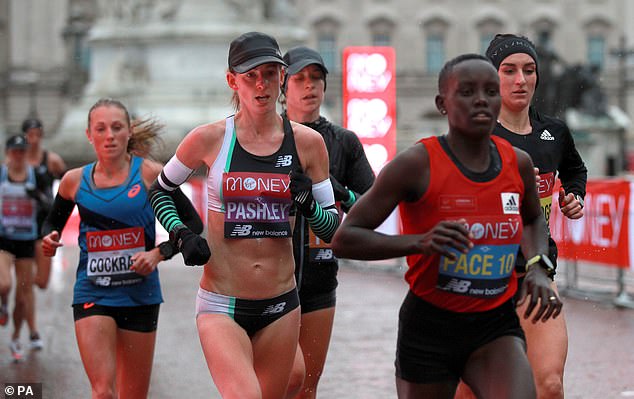 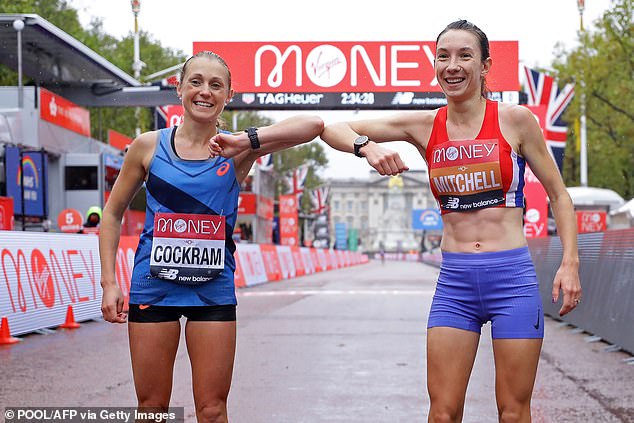 Natasha Cockram (left) was the leading British runner in 13th, finishing with a time of 2:33.19

‘The Eagle’ forced Justin Gaethje to submit in the second to stretch his record to 29-0 and retain his lightweight title.

However, the Dagestani star surprised everyone afterwards by declaring his days in the cage were over.

Khabib was instantly hailed by the MMA world for his incredible accomplishments but praise also came from an unlikely source.

McGregor reached out to the Russian to congratulate him on his performance while vowing to carry on the lightweight division.

One fan replied: “Glad to see this.”

Another said: “Respect. No need to hold grudges against each other.”

A third added: “I really wanted the rematch. I think Conor’s the only one on the roster who had a legitimate shot against Khabib but I also dont blame Khabib for calling it the end here. Much respect to him.”

Many were expecting Khabib to attempt a perfect 30-0 with a potential rematch against McGregor or a super-fight with Georges St. Pierre.

McGregor meanwhile may now face Dustin Poirier for the vacant lightweight crown in January which was originally tipped to be a number one contender’s bout to face Khabib.

But it did not prevent Nurmagomedov from retaining his lightweight crown on Fight Island with a second round submission in Abu Dhabi.

Unbeaten Khabib then announced a shock retirement following his 29th straight win, which was the first since the death of his father from Covid-19.

And UFC president White admitted Nurmagomedov, 32, deserved to go out on top, having gone to great lengths in order to headline UFC 254.

He said: “We are all lucky that we got to see him fight tonight because apparently he was in the hospital with a broken foot three weeks ago.

“I think he has two broken toes and a bone in his foot broken, that’s what his corner told me.

“He never told anyone, was just walking around as normal, he is one of the toughest human beings on the planet.

“He is the No1 pound-for-pound fighter in the world and you have to start talking about him having GOAT status with whoever else you think is the GOAT.

“When guys want to fight, the fight and when they don’t they don’t.

“You have got to give them time and let them heal mentally more than physically, with what he has gone through losing his father.

“We are all lucky to have seen him on Saturday night.”

Nurmagomedov was left in tears after beating Gaethje, as he dedicated the win to his dad and coach Abdulmanap, who passed away aged 57 due to coronavirus in July.

But he said he feels unable to fight on without his influential father and mentor, who he had trained with since the age of eight.

Nurmagomedov said: “Today, I want to say this is my last fight.

“I want to say thank you to Lorenzo and Dana. All this UFC team, everybody, they made a great show.

“One day something will happen for you, you never know what is going to happen tomorrow.

“Today is my last fight here in the UFC.”

The hottest jumps trainer in the country right now is not one of the familiar big-name operators but a woman who has only eight horses in training in her stable in Wales.

In the last two weeks all five runners that Sheila Lewis has saddled have won. Her seasonal tally is seven wins from 32 runners, a strike rate of 32 per cent.

That becomes an even more remarkable achievement when you consider Lewis had trained only five winners in the previous four seasons as she juggled her training career alongside running a beauty salon which means shortly after riding out she can be administering a spray tan. 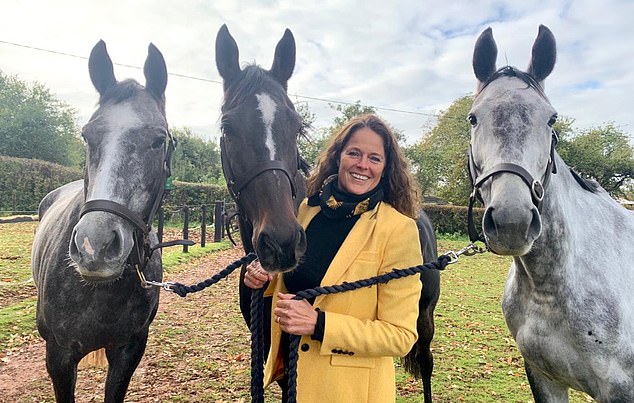 Lewis, 52, who trains in the village of Three Cocks, five miles from Hay-on-Wye and 10 from Brecon, might not have finished yet.

Cotton End, Straw Fan Jack and Knight Commander, who all won at her local track Hereford on October 13 as Lewis landed an 1,182-1 treble, are all due to run again next week alongside stablemate Volcano.

Lewis, speaking before administering a hot-stone massage to a client at her salon The Beauty Mill on Friday, admitted: ‘I can’t believe it.

‘I only have eight horses and that includes two youngsters, but they’re bouncing and before they ran I did feel they were in the best form I’ve ever had them.

‘Knight Commander has won two races and probably should also have won before that. He got badly hampered when looking like the winner at Uttoxeter. 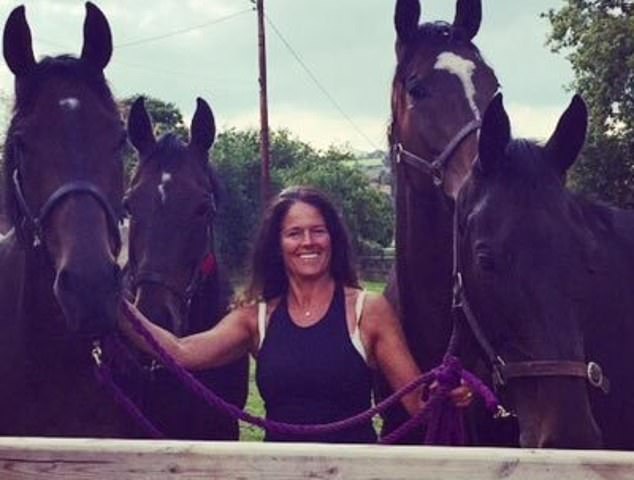 ‘I’ve juggled the two jobs for five years. It has been really tough because they’re completely opposite. I’m out with the horses then I have to get my act together and get my glam kit on for the salon.

‘In March we were locked down so I had to close the salon. I concentrated on the horses and threw myself into the training. I think there’s definitely a connection.

‘In July we opened up again but my salon has taken a huge hit and I’m only taking a third of what I was taking. The positive is it has all turned around. The horses are now paying for the salon rather than the salon topping up the horses.’

Her only help at the stables is 18-year-old Katie Powell, whose first two rides as an amateur jockey this month on Knight Commander have been winners.

Lewis added: ‘I’m up with the horses at 6am and I have Katie who lives in the next village. We manage it together and I do four lots before I start in the salon at about 11am. 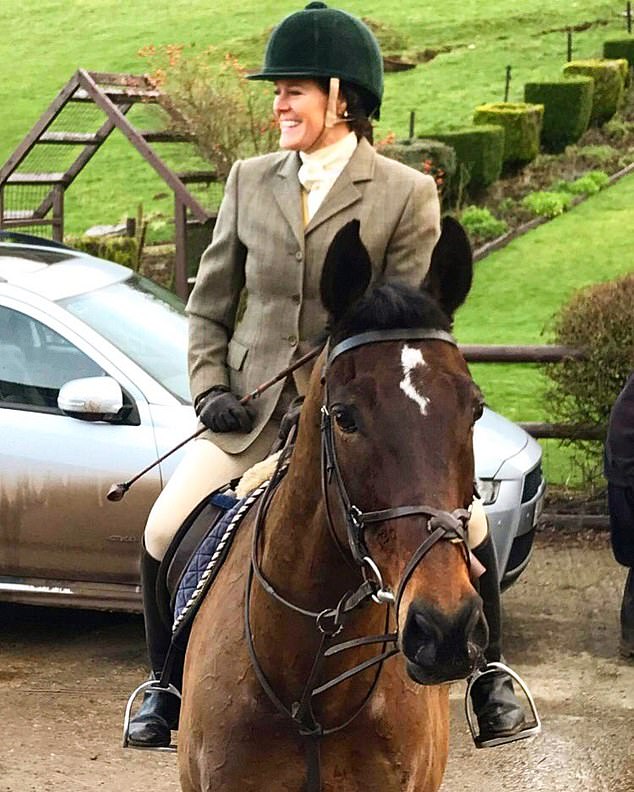 ‘I go back up at night to the horses and it’s just me. It’s nothing for me to be up there until 8pm or 8.30pm, especially if we have a horse racing the next day. I feel like this is four years of hard slog to get to this.’

With changes to the Covid-19 rules instigated in Wales the closed signs had to be put up at the salon again on Friday.

Lewis, who said her dream would be to have a horse good enough to run in a big race at Cheltenham, said: ‘We are shut for two weeks. As it is, it has worked out quite well because I have three days next week when I’m away racing. I would have had to juggle clients, but they’re very good and understanding. They back the horses and love to hear the stories.

‘The horses are a huge distraction. I feel so blessed to be able to go and get lost with them as opposed to being stuck in the house.

‘They have given everyone here in the village a lift and it’s a nice positive story at such a glum time.’

Rapper Offset livestreams himself being detained by cops in Beverly Hills