The Cam Newton era for the New England Patriots arrived on the ground.

Newton rushed for 15 times for 75 yards and threw for 155 yards, leading a Patriots offensive attack that did most of its damage via the rushing game in their first game since the departure of Brady to Tampa Bay as a free agent. 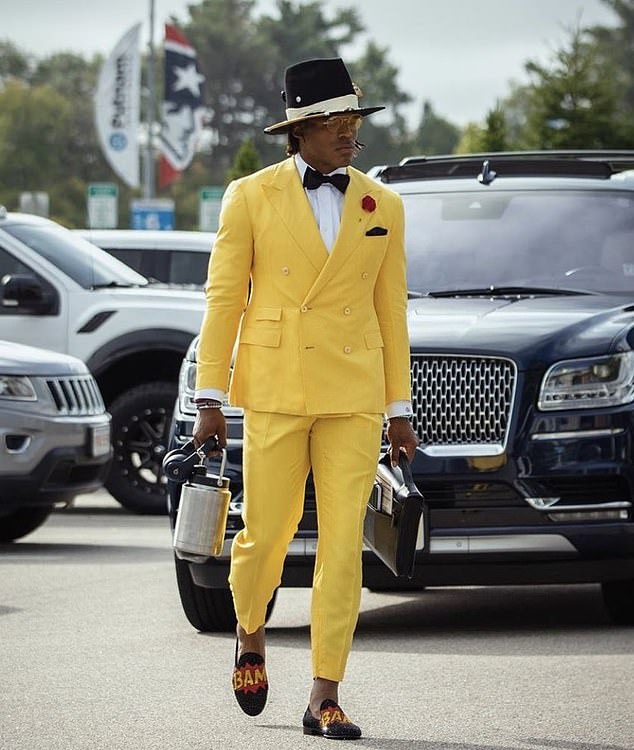 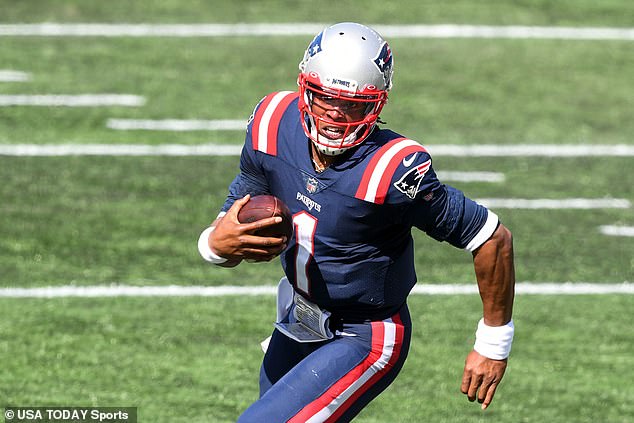 The quarterback is well known for his unique outfit choices and upon arriving at the Gillette Stadium he proved that this would be no different at the New England Patriots.

He arrived wearing a golden yellow suit with loafers with ‘BAM’ written in a classic comic book font.

‘It was relatively picking up right where I remember the game to be,’ said Newton, who played for the first time in more than a year.

‘I think it was just a feeling-through process as well with (offensive coordinator) Josh (McDaniels), coach Bill (Belichick), as well as (quarterbacks coach) Jedd (Fisch) to understand what they have. … We made the adjustments and we executed.’

Newton’s 75 yards were the most by a Patriots quarterback since Steve Grogan had 81 in 1977.

Sony Michel added a touchdown for New England, which had 217 of its 357 yards on the ground. Newton was 15 of 19 passing.

Newton said not even a postgame scrum in which a Dolphins player ‘got under my skin’ by grabbing his chain could ruin the day.

Most of the sights and sounds normally associated with Gillette Stadium’s usually raucous crowd were silenced by a Massachusetts COVID-19 ordinance prohibiting fans from attending for at least the first two games of the season.

Aside from the play on the field, the only familiar staples of a normal game day were the presence of Patriots mascot and cheerleaders, though they cheered from a concourse high above New England’s entrance tunnel. 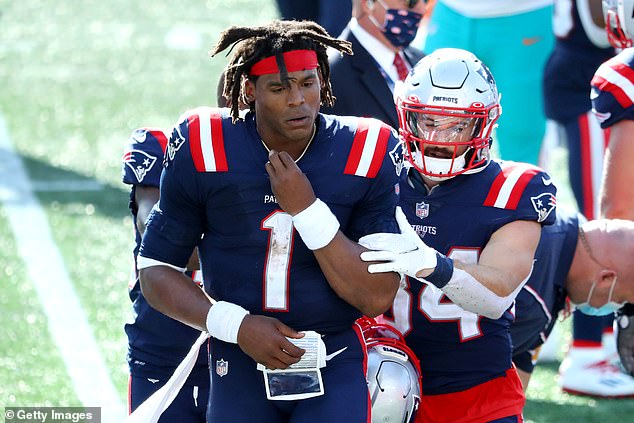 It didn’t seem to bother the Patriots, who had plenty to cheer about.

Miami struggled for most of the game offensively and lost top receiver DeVante Parker, who left in the third quarter with a hamstring injury.

Ryan Fitzpatrick was 20 of 30 for 191 yards and three interceptions. Miami was held to 269 total yards.

‘I felt up front we played well,’ Fitzpatrick said. ‘I have to play better in my part.’

Newton scored from 11 yards early in the third quarter to put New England up 14-3. Late in the period, Jerome Baker kept the Dolphins in the game, stripping N’Keal Harry inside the 5-yard line, causing a fumble through the end zone for a touchback.

Miami then cut New England’s lead to 14-11 in the fourth quarter on a 1-yard TD run by Jordan Howard and 2-point conversion run by Fitzpatrick with 10:31 left.

The Patriots went quickly on their ensuing series and moved inside Miami’s 40, thanks to a 23-yard run by Julian Edelman and 15-yard penalty on Baker for a late hit. Newton muscled inside the 1 on a fourth-and-1 draw play. Michel went over the top for a TD on the next play. 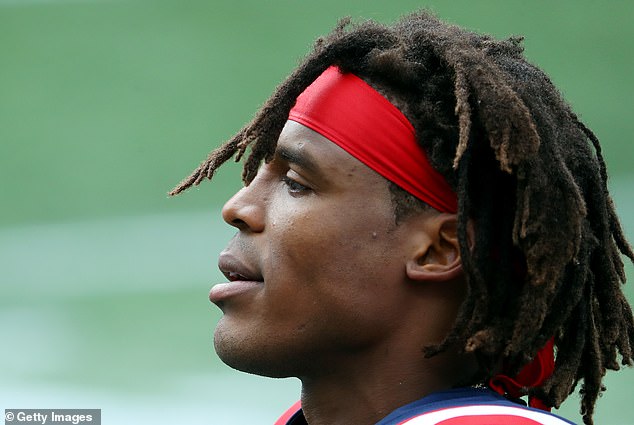 ‘Just too many turnovers at the end of the day,’ coach Brian Flores said.

Newton’s arrival was expected to bring more of a running mentality to New England’s offense and it showed early.

Newton carried on the second play of the game and capped an 11-play, 80-yard drive with a 4-yard touchdown run on the Patriots’ third possession to put them up 7-0. The 2015 league MVP was untouched as he crossed into the end zone on the play, spiking the ball and flexing as he was surrounded by teammates.

‘He’s earned everybody’s respect,’ Belichick said. ‘That’s all you can ask for anyone and he’s done that.’

Saracens 40-17 Exeter: Sarries thrash youthful Chiefs side as they prepare for European tie

JAMES RODRIGUEZ’S former club Banfield have confirmed that Everton paid no transfer fee to Real Madrid for his services.

In one of the coups of the summer, the Toffees managed to lure the Colombian playmaker to Goodison Park on an initial two-year deal.

It was initially believed that Everton had forked out £22million to bring the 29-year-old to the Premier League.

But SunSport reported last week how the Merseyside outfit landed him on a free – despite Rodriguez having a year left on his contract at the Bernabeu.

And now his former club Banfield have revealed that Everton signed him for nothing, as they claimed they received no money from the deal.

Having sold the player to Porto in 2010, they ensured they would be due a small fee of the transfer for whenever Rodriguez joined other teams.

But in a statement from the Argentine side obtained by Marca, Banfield have insisted they have received no money from his latest move.

Club treasurer Ignacio Urquiza said: “After hearing the news of the transfer of James Rodriguez from Real Madrid to Everton, and attentive to the current FIFA regulations, the Club Atletico Banfield made the pertinent consultations to find out if it was their responsibility to collect money through a solidarity mechanism.

“Unfortunately for the pass of James Rodriguez from Real Madrid to Everton, Banfield does not correspond to money.

‘The transaction was made without cost, as if it were a free player.

“The pertinent consultations have already been made to the two clubs involved and to the corresponding organisations.

“In all cases they confirmed to us that the club will not receive money as a solidarity mechanism.”

Rodriguez starred on his debut for the Toffees on Sunday as he was instrumental in the 1-0 win away at Tottenham.

Liverpool ‘ask for Dembele in loan transfer from Barcelona with Klopp wanting him to link with Salah, Mane and Firmino’

LIVERPOOL have reportedly made contact with Barcelona over a loan move for Ousmane Dembele.

Jurgen Klopp is keen on signing a new forward to provide competition for his established front three of Mohamed Salah, Sadio Mane and Roberto Firmino.

The Reds are thought to be open to offers for Xherdan Shaqiri and Divock Origi, while Rhian Brewster has been linked with a move to Sheffield United.

Yet Spanish news outlet Sport claim that the Premier League champions have launched an official enquiry for Barca ace Dembele.

The report claims that Liverpool hope to land the Frenchman on a season-long loan deal.

The Reds are said to be willing to pay Barcelona a fee to take Dembele for the campaign as well as front the winger’s full salary.

Yet the outlet suggest that the LaLiga giants are uninterested in Liverpool’s offer and won’t sanction a loan for the former Borussia Dortmund star.

The £135.5million signing has struggled with injuries at the Nou Camp and could only muster nine appearances last season.

Yet Blaugrana president Josep Maria Bartomeu recently claimed Dembele would not be sold amid interest from Manchester United.

He told Barca TV: “Messi is untouchable & non-transferable. He knows it, we all know it.

“But there are various non-transferable players like [Marc-Andre] ter Stegen, [Clement] Lenglet, [Nelson] Semedo, De Jong, Griezmann, Dembele… players we are counting on in the future.”

Liverpool are currently set to unveil their second capture of the window following the arrival of Bayern Munich midfielder Thiago Alcantara.

Liverpool ‘ask for Dembele in loan transfer from Barcelona with Klopp wanting him to link with Salah, Mane and Firmino’