Worth £150BILLION and the cousin of Manchester City owner Sheikh Mansour, Sheikh Khaled, 62, recently failed in bids to take over Liverpool and Newcastle.

But now, The Athletic are claiming he is keen to buy out Derby – with current owner Mel Morris thought to be keen to sell and holding out for around £60million.

Sheikh Khaled is believed to have seen a £2billion bid to take over Liverpool rejected in 2018.

If successful, that would have been the most expensive buy-out in football history.

More recently, he was unsuccessful in his £350m bid to take control of Newcastle just last year.

The Athletic have revealed Derventio Holdings (UK) Limited was officially registered with Britain’s registrar of companies.

Derventio was a Roman town which grew to become what we now know as Derby.

Samuelson has plenty of experience in taking over football clubs too, helping Reading in 2012 and Aston Villa in 2016.

Sheikh Khaled has been named as a ‘person with significant control’ at Derventio Holdings (UK) Limited.

Sheikh Khaled established the Bin Zayed Group in 1988 having graduated in business administration from Boston University before completing a PHD in finance from Michigan State.

Meanwhile, it’s claimed Derby owner Morris – who bought the club in 2015 – has been keen to offload ‘at least a significant chunk’ of the club for a year now.

Having been in the Premier League for just one season since 2002, Derby have been leaking money in recent years, with Morris – worth £500m – keen to escape.

Morris was even forced to SELL Pride Park to another of his companies in order to avoid being in breach of the Football League’s profitability and sustainability rules.

With Phillip Cocu under pressure as Derby boss, Wayne Rooney has been linked with the manager’s position as the Rams look to the future, on and off the pitch.

Bin Zayed Group and Samuelson are yet to comment on the report.

DIEGO MARADONA sadly died on November 25 – the same day on which fellow footballing great George Best passed away 15 years ago.

Best, who helped Manchester United win the European Cup in 1968, was confirmed dead age 59 in 2005 after his long battle with alcoholism.

And now his reality TV star son Callum paid tribute to Argentine icon Maradona after the devastating news of his passing.

It comes after the shock news yesterday that Maradona – notorious for his infamous ‘hand of god’ goal against England – died at his home on the outskirts of Buenos Aires.

His death comes two weeks after surgery following a bleed on the brain.

Maradona – who turned 60 last month –  has suffered a long battle with his health forcing him to make numerous trips to hospital in recent months.

His last words before he died were “Me siento mal” or “I don’t feel well” in English.

Maradona had gone back to bed after having breakfast with his nephew Johnny Esposito and telling him he was going to lie back down.

A nurse treating him at home later called an ambulance but he could not be saved, according to local reports.

Argentine President Alberto Fernandez declared three days of national mourning in honour of the star, who was a cultural icon and national hero.

Thousands of grieving fans took to the streets in Buenos Aires and Naples, and a minute’s silence before last night’s games in the Champions League.

Superstars Lionel Messi and Cristiano Ronaldo were among the masses paying tribute to Maradona.

And so did Brazilian great Pele – with whom Maradona was regularly paired as the best of all time.

He said: “I have lost a dear friend, and the world has lost a legend. One day, I hope, we will play soccer together in the sky.”

Messi wrote: “A very sad day for all Argentines and for football.

“He leaves us but does not leave, because Diego is eternal.

“I keep all the beautiful moments lived with him and I wanted to take the opportunity to send my condolences to all his family and friends.”

Ronaldo added: “Today I say goodbye to a friend and the world says goodbye to an eternal genius.

“One of the best ever. An unparalleled magician.

The world of football is in mourning after the death of Argentina icon Diego Maradona at the age of 60 from a heart attack.

The European football community will awake on Thursday to find an array of glorious tributes to Maradona, who played in both Spain and Italy with Barcelona and Napoli respectively.

But it is arguably France‘s L’equipe that has the most powerful front page on Thursday – a picture of Maradona stood proudly in an Argentina shirt with the headline: ‘God is dead’. 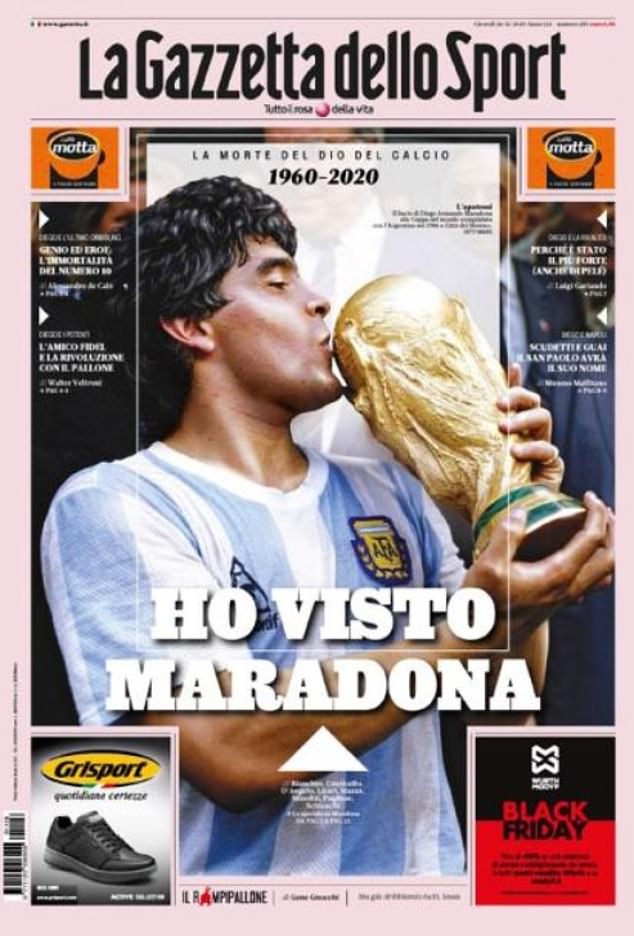 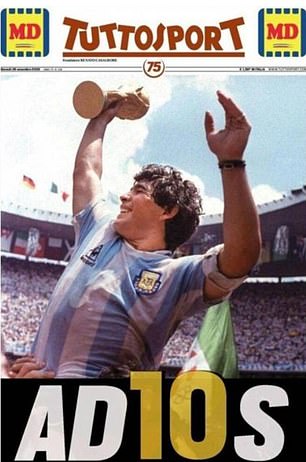 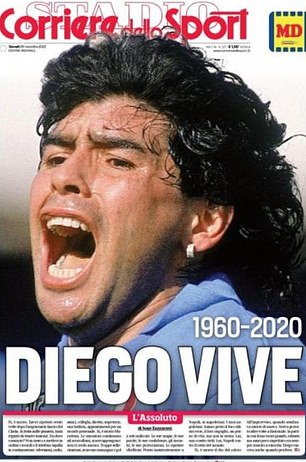 Maradona’s touch, speed and poise was a fabulous combination on the pitch and propelled from the slums of Buenos Aires to timeless stardom through the world of football.

The unplayable level that he reached as he spearheaded Argentina’s surge to 1986 World Cup glory in Mexico that is most prominently remembered.

The Italian papers, in the country where he also thrived with Napoli, mainly lead with pictures of him in the blue and white of his country.

La Gazzetta dello Sport, with a picture of Maradona kissing the Jules Rimet trophy in 86, say: ‘I saw Maradona’.

Tuttosport have the picture of him being carried on the shoulders of his team-mates in the immediate aftermath of his World Cup triumph at the Aztec stadium, with the headline: ‘AD10S’, referencing the No 10 shirt that became synonymous with his career.

Corrierre dello Sport have a picture of Maradona in his Napoli days under the headline ‘Diego Lives’.

In Spain, the tributes to Argentina are just as gracious. Marca runs a powerful quote of Maradona reflecting on his life on its front page, which says: ‘If I die I want to be born again and I want to be a footballer. 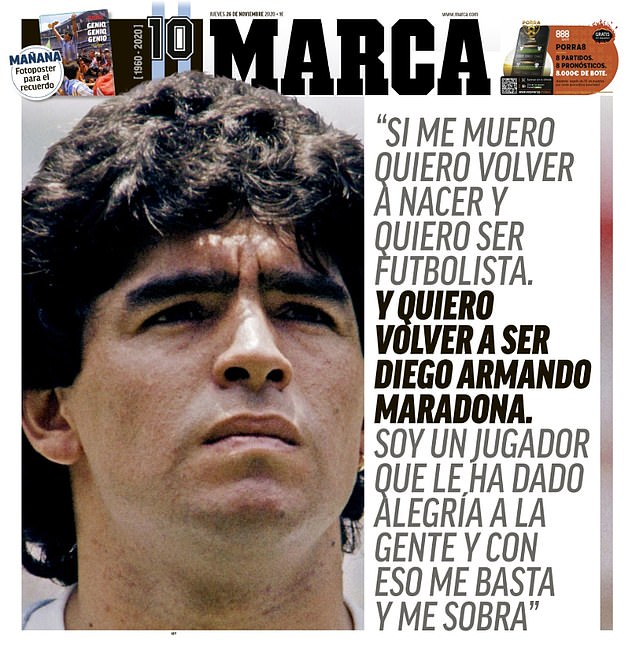 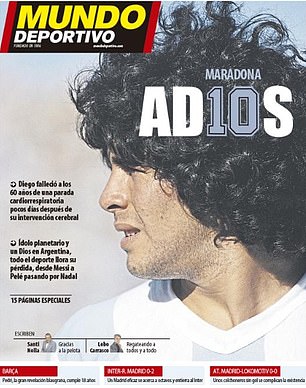 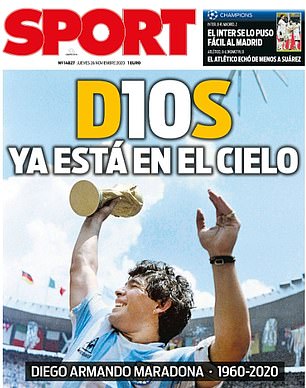 And I want to be Diego Armando Maradona again. I am a player who has brought joy to the people and that is enough for me.’

Mundo Deportivo – the Barcelona based publication – also run with an ‘AD10S’ style headline and say all of sport, not just football, are mourning his death.

Sport use the same picture as Tuttosport in Italy but with the headline: ‘God is already in heaven.’

Sergio Aguero tweets tribute to Diego Maradona, who was his son’s grandfather

Sergio Aguero has paid tribute to his former father-in-law and Argentine icon Diego Maradona following his tragic death at the age of 60 on Wednesday.

Football was left in a state of shock after Maradona passed away following a cardiac arrest, which came just a fortnight after he had surgery on his brain, and tributes immediately poured in throughout the world.

And Manchester City striker Aguero, after his involvement against Olympiacos in the Champions League on Wednesday, penned a poignant message on social media in honour of Maradona. 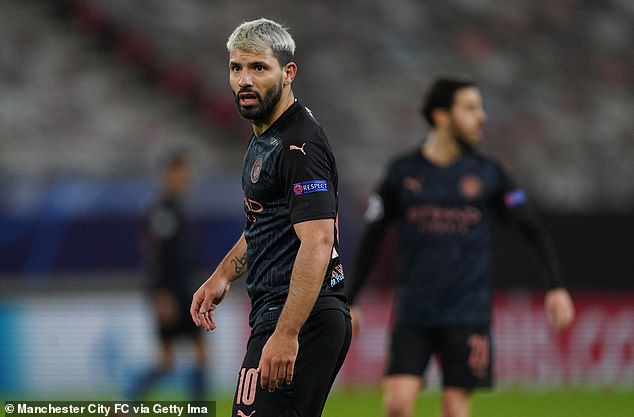 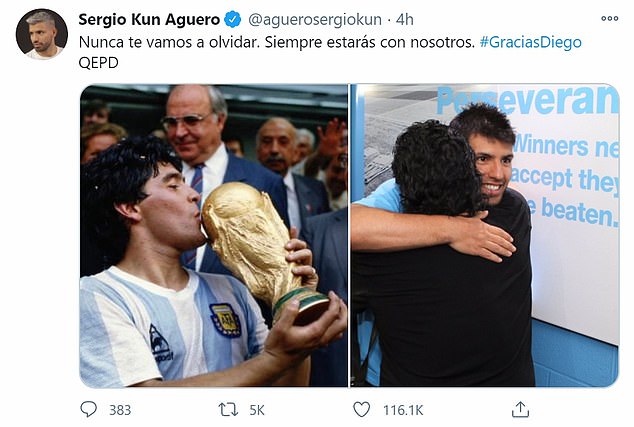 Aguero wrote on Twitter: ‘We are never going to forget you. You will always be with us.’ 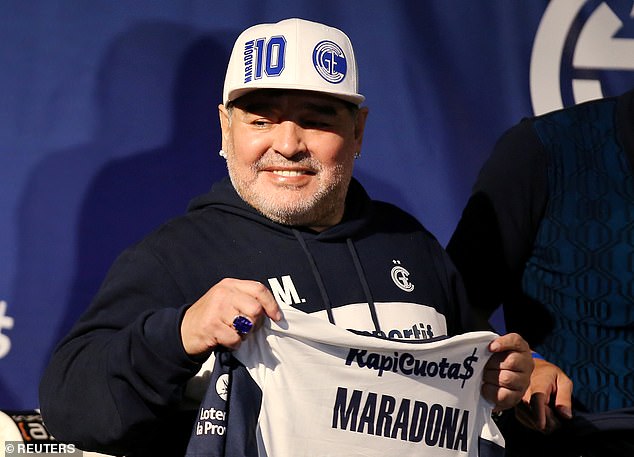 Alongside a picture of the pair embracing and Maradona winning the World Cup in 1986, Aguero captioned his Twitter post: ‘We are never going to forget you. You will always be with us. #GraciasDiego RIP.’

Earlier in the evening, Pep Guardiola described the late Maradona as one of the ‘few incredible players’ in football history.

The Manchester City manager joined the world of football in paying tribute to Maradona after his side beat Olympiacos on Wednesday night, while Guardiola also gave his public support to striker Aguero, who is the Argentinian’s former son-in-law. 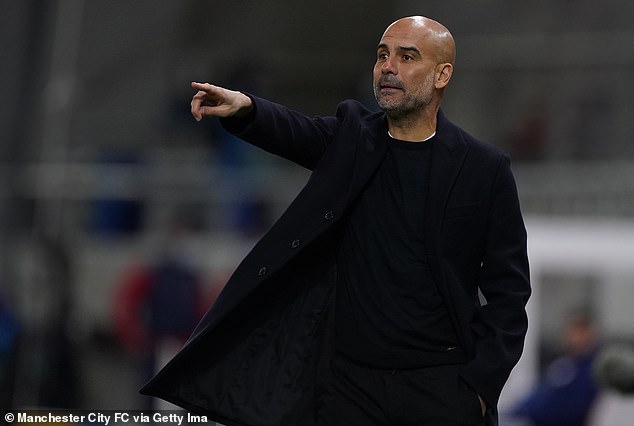 Aguero was married to Gianinna Maradona, the youngest daughter of the former Argentine footballer who was there at the birth of the couple’s son Benjamin in 2009.

The couple separated in 2012 with Aguero and Maradona reportedly falling out, but Guardiola still sent his thoughts and prayers to the Manchester City striker’s family.

The Spaniard told BT Sport on Wednesday night: ‘First (I think about) Sergio. His son, Diego was his grandfather.

‘There are few incredible players in our history, he’s one of them. He was someone who made this sport better. On behalf on Manchester City a big hug for all his family.’ 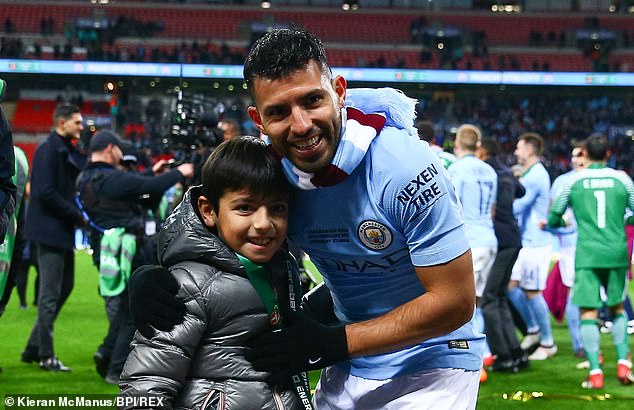 Maradona was best known for his stunning attacking displays for Argentina, playing an integral role in the country’s 1986 World Cup triumph in Mexico, including two goals against England in the quarter-finals.

The Argentine is also a cult-hero at Napoli and Boca Juniors, winning two Serie A titles with the former in 1987 and 1990 along with the 1989 UEFA Cup.

Before joining the Italian side, Maradona spent two seasons at Barcelona and scored 38 goals in 58 games whilst playing for the Catalans. 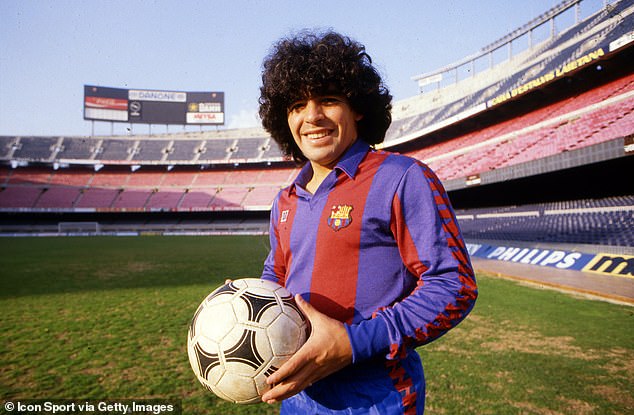 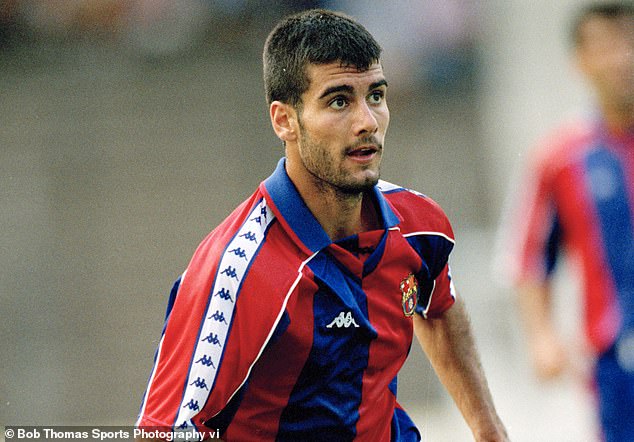 While former Barcelona midfielder Guardiola admitted he never played with Maradona, the Spanish manager understands the impact the legendary forward had on the game.

Guardiola added: ‘When I arrived at the Barcelona academy, he left for Napoli and he was there before.

‘It was a short time but the impact was not like what it was like in Argentina, in Boca or in Napoli but what he has done in the world of football is incredible.

‘In Argentina, people know (what he’s done). But he was one of the best for many people. There have been others (such as) Pele but he’s one of them. 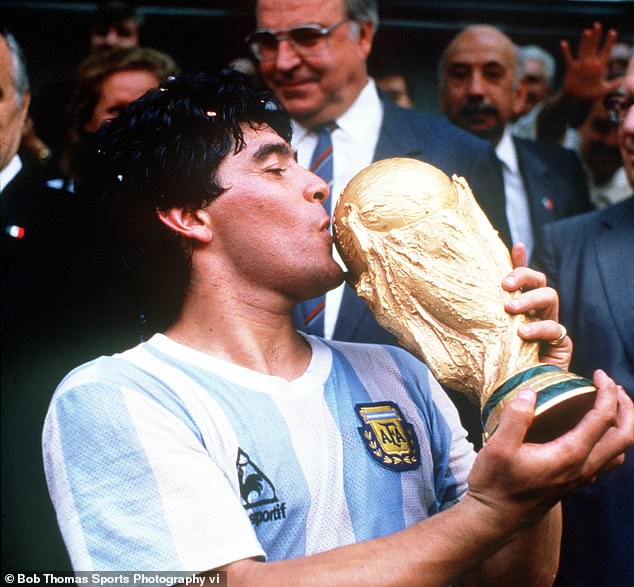 Maradona was an inspirational figure in Argentina, helping them win the 1986 World Cup

‘His influence in football and how he lived his professional, it’s difficult to find a personal player who loves the game more. It’s a sad day for football.’

The Argentinian Government have announced three days of mourning following Maradona’s death, while the residents of Napoli are flooding the streets of their city to pay tribute to their former forward.

Michael B. Jordan and Lori Harvey are seen departing a plane in her hometown of Atlanta