LIONEL MESSI reached another epic milestone as he bagged the 700th goal of his astonishing career against Atletico Madrid.

But the Argentinian’s Paneka penalty was not enough to secure the points as Barcelona failed to overtake Real Madrid in top spot.

A cheeky Panenka penalty to do it 🔥

Their bitter rivals can now go four points clear in LaLiga if they win their game in hand following the 2-2 draw at the Nou Camp.

Despite their title hopes suffering a setback, it will still be the 33-year-old who captures the headlines after he joined rival Cristiano Ronaldo in the 700 club.

The legend, who is comfortably the club’s all-time top scorer, took his tally for the Catalan giants to 630 from 724 games with his effort from the spot moments after half time.

That figure, added to his 70 goals in 138 caps for his country, made him just the seventh player in history to reach the 700 mark.

That put Barcelona 2-1 up after a topsy-turvy clash that saw three penalties awarded.

Diego Costa’s own goal after 11 minutes broke the deadlock and handed the host the lead.

Saul Niguez quickly levelled the scores from the spot for the visitors and it remained all level until the break.

But just five minutes after the restart it was Messi, who was sporting a new haircut alongside team-mate Luis Suarez, who struck to restore his team’s advantage.

However, any hopes they had of holding on to the lead and overtaking Real Madrid were dashed just after the hour mark.

Saul Niguez kept his cool once again from the spot to make it two-all and handed the advantage in the title race to Zinedine Zidane’s Galacticos.

No sooner had the scream of V6 engines filled the Styrian valley than those seeking to prevent Lewis Hamilton winning a seventh world title blew the cobwebs off the rulebook.

How very Formula One, with all its arcane squabbling.

On Friday night, Red Bull protested the legality of Mercedes’ reinvention of the steering wheel ahead of Sunday’s Austrian Grand Prix, which marks the return of major international sport after the coronavirus-created famine. 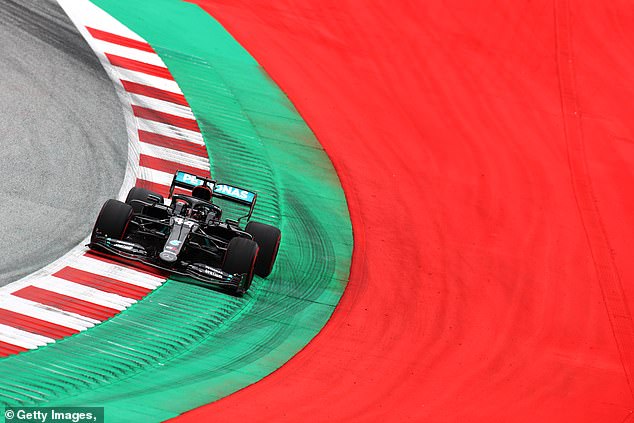 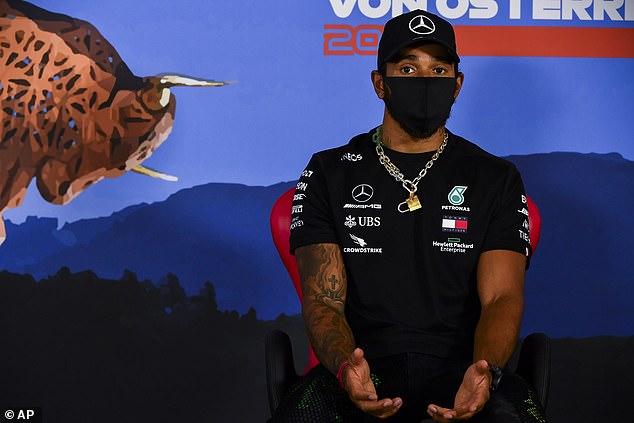 It is not a case of back to normal. Spectators are banned. Masks are worn. Sanitiser is rubbed in. But certain verities pertain: Hamilton led the way in both practice sessions again, his car still the cream at the top of the bottle.

The man himself looks in prime physical shape, a touch more muscular after three and a half months of hibernation in the gym and pounding the pavements.

As for his machine — black-liveried rather than silver, as a nod to the racial equality cause he is espousing — it is helped by the controversial, Red Bull-challenged DAS system (dual axis steering). This enterprising device allows him and team-mate Valtteri Bottas to move the panel they hold in their hands not only right and left but forwards and backwards.

The novel adjustments deliver optimum set-up for both straights and corners by altering the angle of the wheels. 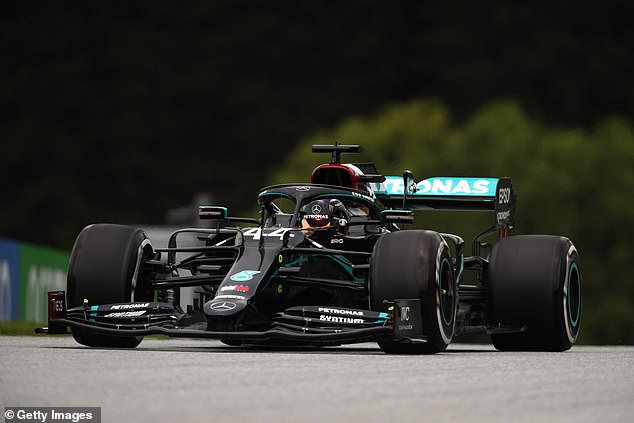 ‘It’s a very clever system,’ said Red Bull team principal Christian Horner. ‘All credit to the ingenuity behind it. The fundamental question for us is, does it comply with the regulations?

‘We’re after some clarification from the FIA. We have questions about it.’ Deliberations were ongoing on Friday night.

Ironically, Red Bull have set about emulating DAS, which broke cover in pre-season testing a lifetime ago in February, and are believed to be close to fitting their own version soon if the FIA declare the Mercedes within the rules. A Red Bull surge is the best hope of Hamilton and Co being threatened this season, however long it might last.

All we know for sure of the schedule for now is that eight races are planned over the next 10 packed weekends. So 18 rounds, finishing in Abu Dhabi in December, is the aim. There are no guarantees. 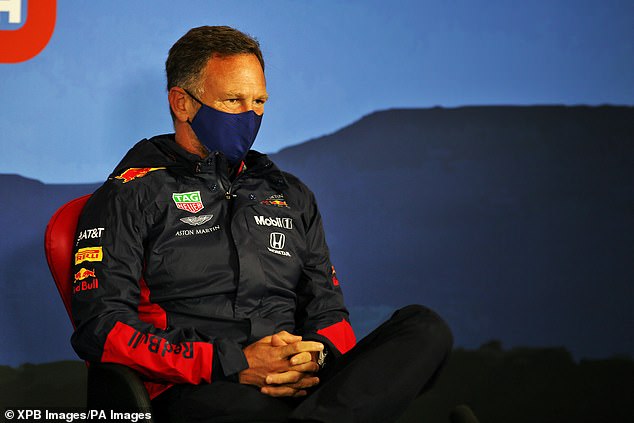 Seizing opportunities, reacting nimbly, will be more important factors than usual. Max Verstappen, in the Red Bull, is the man most likely, just conceivably, to stop Hamilton. He is fearless, young, aggressive.

‘He has the ingredient of self-belief,’ said Horner of the 22-year-old who is remarkably starting his sixth season.

This place at the foot of the Alps, when still known as the Osterreichring, used to be one of the most picturesque killing fields in sport. 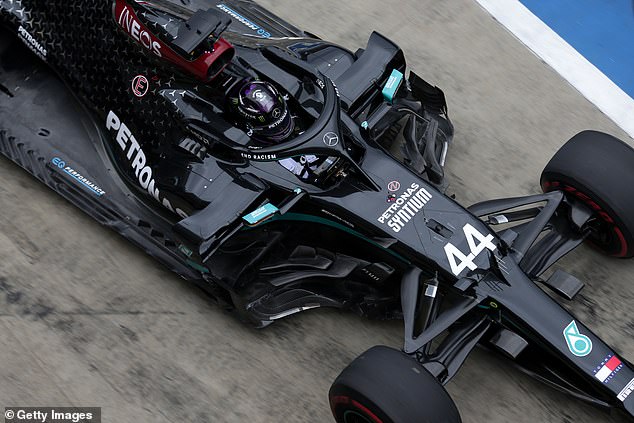 Now it is tamer, and a golden-horned bull, made of 1,200 pieces of rusted steel, ‘jumps’ through a hoop on the infield. Hamilton has won here once, in 2016.

Another winner in Austria is Bottas, the following year. One feels the Finn needs a flying start to launch his season.

If he should fail to land an early blow, it is hard to imagine him keeping his confidence high or denting Hamilton’s.

There are two reasons why the champion could waver. First, the uncertainty over his future at Mercedes. As we report on Saturday, he is asking for twice as much as his team want to pay him in these Covid-hit days of reduction, £40million to £20m. Will the gap breed ill-feeling? Secondly, will his political activism, fervently supporting the anti-racism cause, act as a distraction (or indeed as motivation)? 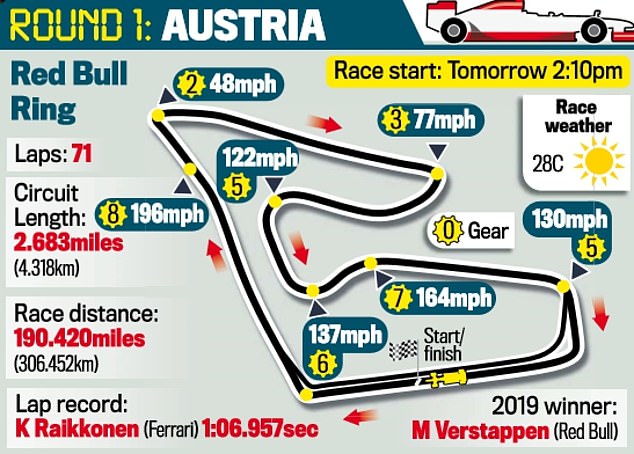 John Watson, a five-time race winner in the more dangerous era of the Seventies and Eighties, thinks it might be a negative.

‘Has he reached a tipping point?’ he wondered. ‘Have outside interests become bigger in Lewis’s mind than his racing? Has he the capacity to separate the two things?

‘Bottas is the sleeper this weekend and maybe this season. Judging by his social media output he is fitter than ever, never off his bike, and has been spending his time contentedly in Finland with his new girlfriend. He’s one to watch.’

What else is there to watch? Sebastian Vettel at Ferrari. The German has been told he has no future at Maranello from the end of the season, which means he is now slipped the pressures of corporate responsibility.

His relationship with the team and his replacement as No 1, Charles Leclerc, has the potential to turn toxic. It will be political at best.

Talking of politics, all eyes will be turned towards the grid on Sunday and the planned statement on the big racial contention of the day. To take a knee or not to take a knee?

This was the question discussed at a long meeting of the Grand Prix Drivers’ Association on Friday night. The millionaires’ trade union decided as one to wear ‘End Racism’ T-shirts.

As it stands, so to speak, some of them will kneel, some won’t.

For the best part of 80 minutes, Charlton showed the sort of defensive resilience that could still keep them up before Millwall finally found the breakthrough they deserved.

After his attacking colleagues had failed to do any damage, central defender Jake Cooper scored the winner to move Millwall within two points of the play-offs.

It was the first goal Charlton had conceded since the restart and with it came their first defeat since the season resumed and leaves them just three points above the Championship relegation zone. 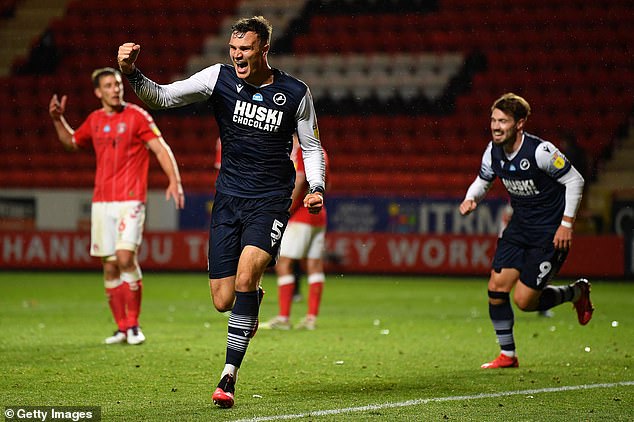 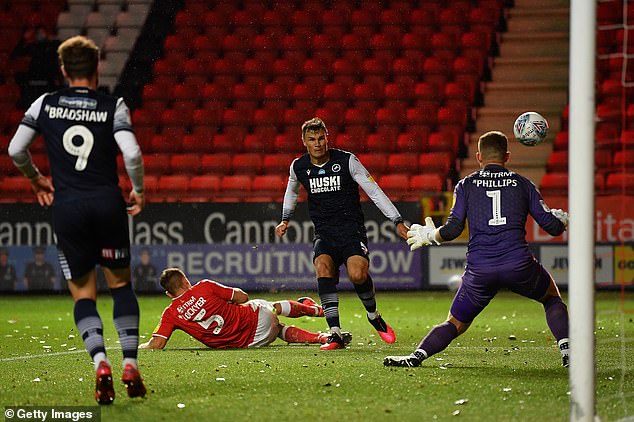 For Gary Rowett and Millwall, it means their hunt for a play-off spot is back on. This was by no means convincing but it was proof once again of their willingness to dig deep – a quality they have possessed since Neil Harris was manager.

This wouldn’t have been pleasant viewing for Charlton manager Lee Bowyer. Despite keeping Millwall at bay for large parts, his side were blunt in attack and struggled to cause the visitors problems before their defence was breached.

Charlton did, however, start the brighter of the two sides with Albie Morgan and Tomer Hemed both having shots blocked or saved. But after that sweet but short spell Millwall found their rhythm and soon Charlton were retreating into their own half.

Romeo’s runs down the right were forcing Charlton’s defensive line back which gave lone striker Matt Smith the chance to get into more dangerous positions. Smith’s presence, particularly in the air, unsettled Charlton captain Pearce and central defensive partner Lockyer in early stages. Romeo’s crosses from the right continued to come but Smith either didn’t make his runs soon enough or was barged off the ball when Lockyer began to read what he was trying to do.

When Romeo dinked a ball up to Smith at the far post he went to head it only for Lockyer to get in front of him and force the striker into fouling him. The crosses from the right continued to be Millwall’s most preferred route to goal. Not long after Jed Wallace sent a low cross into the box which skidded through the six-yard and also past Smith who was stretching for the ball at the back post.

Charlton found it tough to plot a way out of their own half but when they did they tended to do well without reward. 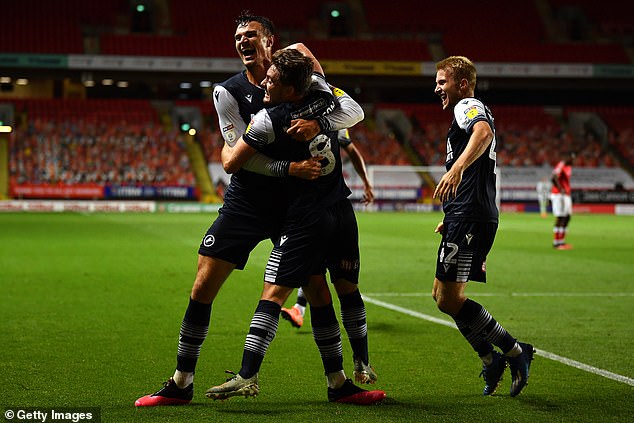 Macauley Bonne should perhaps have gone to Bartosz Bialowski’s right after he sprinted through on goal only to spurn Charlton’s best chance of the half by shooting straight at the Millwall goalkeeper.

It didn’t get much better for Charlton’s front two of Bonne and Hemed in the second half.

Hemed was in a prime position on the edge of the Millwall area but rather than look for a pass he chose to go it alone only to take a heavy touch and lose possession. 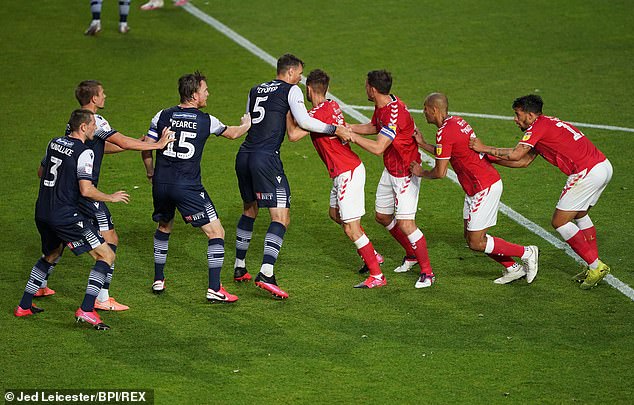 It summed up Charlton’s attacking potency that without Lyle Taylor lacks finesse and or much cause for defensive concern.

Bonne made way for Chuks Aneke in the 64th minute but he too struggled. In fact, the closest Charlton came to scoring as the clock ticked down was when Lockyer volleyed wildly over the bar.

A point would have been satisfactory for Bowyer and Charlton but not deserved and it wasn’t to be. After Phillips had saved from Connor Mahoney, Cooper reacted quickest and rifled the ball into the roof of the net. 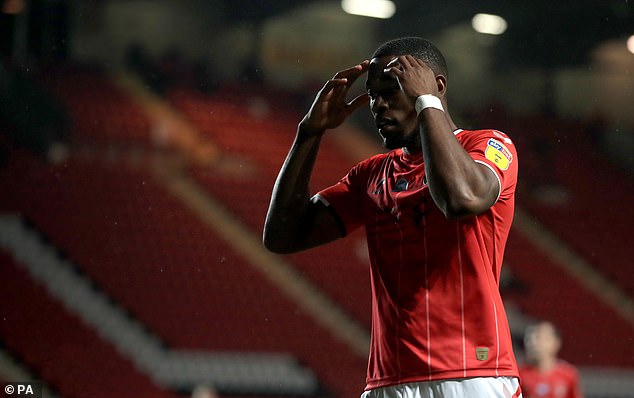 KYLE LAFFERTY has revealed he put a GUN to Michael O’Neill’s head after Euro 2016.

The former Rangers and Norwich man made three appearances in France as Northern Ireland qualified for the knockout phase.

He starred against Poland and Northern Ireland in the group stage but was dropped for the win over Ukraine.

The Northern Ireland squad had a farewell party before jetting home after being knocked out by Wales.

And ex-Ibrox forward Lafferty has revealed he jokingly put a gun to his gaffer’s head after the national team’s security guards brought out their unloaded guns.

Speaking on Open Goal, Lafferty said: “After the Wales game it was just like ‘let loose’.

“And there was always the three security guards that always came with us. If two of us wanted to go the the shop, one of them would come with us.

“But they’d always carry guns. They were top guys, you don’t mess with these guys.

“So they started drinking as well. We got friendly with them and we were always chatting and they said ‘Give us 10 minutes and we’ll come back’.

“So we were like ‘What the f*** are they doing, are they bringing more drink? There’s loads here.

“They came back with all their guns. Night vision goggles, big guns, everything! Obviously not loaded.

“So we’re in this room and we’re like Rambo. Night vision goggles, guns, p***ed.

“Michael O’Neill’s sitting there and I’ve went up to Michael and I put the gun to his head and said ‘Do you regret dropping me against Ukraine now you p***k?’

“Thinking back to it I’m like what’s going on man.”