PREMIER LEAGUE supporters will be allowed back into stadiums from next month after the Government loosened lockdown restrictions.

But it will be far from how we know the beautiful game with a string of strict rules in place to help prevent a second wave of coronavirus.

The Premier League seasons gets underway on September 12.

Trials of allowing some fans back in stadiums will be tested later that month ahead of a planned full rollout in October.

So to be fully prepared as to what to expect, SunSport provides a rundown of the measures set to be in place.

It will be a long time until the likes of Old Trafford or Emirates are full to the brim with 75,000 fans.

But to ensure a safe return, capacity is expected to be limited to around 25 per cent although an official figure has yet to be determined.

Similarly to pubs and other establishments that have reopened, a one-way system will be in place to maintain social distancing.

That will include keeping a distance from fellow fans while entering through turnstiles and avoiding supporters exiting the stadium.

One of the most notable rule changes will be a lack of singing from fans.

Health experts have advised people from projecting their voices to avoid the spread of spit particles.

Supporters will be asked to sign forms before games that is a declaration that they are not showing any coronavirus symptoms.

Similarly to the MLS, fans will need to sign a waiver stating they won’t take legal action against the club if they contract the virus.

Unless you arrive at the game with a member of the same household, expect to be seated at least two metres apart from other supporters.

To ensure fans maintain a social distance, clubs will hand supporters staggered arrival times which they will be encouraged to stick to.

This will also be dependent on where inside the stadium they are being seated.

Staggered arrival times will also prevent people from brushing past fans when trying to get to their seat.

The return of football since mid-June has been an absolute joy, with no shortage of excitement on the pitch, but something has definitely been missing.

That something is the crowd.

Supporters are the lifeblood of the game so it’s great news that stadiums could see a return of fans for the new season, albeit at a quarter of capacity.

It’s just a shame they might not be allowed to sing, whether they’re winning or not.

It will remain a club’s responsibility to provide hand sanitiser to ensure the health and safety of supporters.

Numerous sanitisier stations will be dotted around stadiums, both inside and out, so there’ll be no excuse to use them. 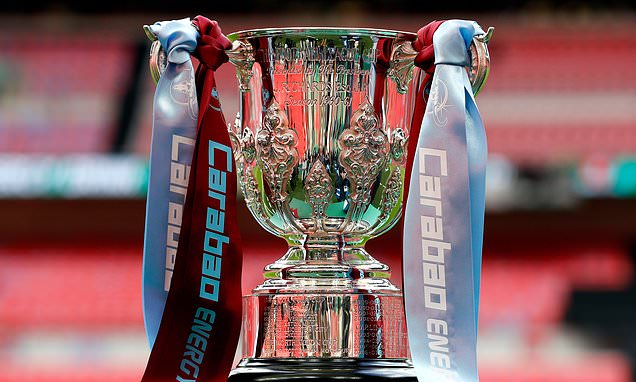 The Carabao Cup third round gets underway this evening with Manchester United making visit to Luton Town in the late game with earlier action from West Ham and West Brom who host Hull City and Brentford, respectively.

Leyton Orient’s clash with Tottenham, however, has been postponed.

MANCHESTER UNITED are looking to bounce back from Premier League defeat by Crystal Palace as head to Luton in the Carabao Cup.

Ole Gunnar Solskjaer’s men were rumbled by the Eagles at Old Trafford in their first game of the new season and will look to respond immediately.

But their opponents are not the ideal customers with Nathan Jones’ side off to a flying start with four wins from four in all competitions.

What time does Luton vs Man Utd kick off?

What TV channel is Luton vs Man Utd on and can I live stream it?

Luton still have a handful of players out through injury, including Dan Potts, Brendan Galloway and Eunan O’Kane but will be hopeful Tom Lockyer will return from cramp.

Look out too for Ryan Tunnicliffe making a start against his former side.

As for Manchester United, we can expect changes and the possible returns from injury of Nemanja Matic and Sergio Romero.

Aaron Wan-Bissaka may be fit enough to start after spending Saturday on the bench and Donny van de Beek may get his first start.

*Latest odds from Ladbrokes correct as of Monday, September 21

MANCHESTER UNITED’S shock move for Crystal Palace flop Alexander Sorloth came to nothing as the striker signed for RB Leipzig.

The Norwegian struggled in a disastrous 12-month spell at Selhurst Park, failing to net a league goal in 16 appearances, before being sent out on loan.

He has performed well elsewhere, freely scoring for Danish side Midtjylland before his move to Palace as well as Trabzonspor.

His loan spell in Turkey last season, which came after a season-long loan in Belgium with Gent, earned Sorloth, 24, rave reviews.

An impressive 33 goals in 49 outings helped Trabzon to second in the Super Lig table and a big move has been predicted for the forward.

According to Turkish outlet Asist Analiz, United and Tottenham were hoping to fight over his services.

Trabzonspor manager Eddie Newton told SunSport in August: “If someone wants to purchase him at an agreed price then I think it would be foolhardy for the club to turn it down.”

However, Sorloth has put pen to paper on a deal at RB Leipzig – despite fears his cancelled medical would scupper the move.

Palace said: “Everyone at Crystal Palace FC wishes Alexander the very best for his career.”

We wish Alexander the very best for his career.#CPFC | https://t.co/utMcYSDkhb

Leipzig were reportedly ready to pay more than £21million to sign the player, who was only halfway through his Trabzonspor loan deal.

Spurs fans in particular have been desperate for the club to sign some back-up for Harry Kane.

Fernando Llorente and Vincent Janssen both struggled to score goals while waiting in reserve for the England forward, leaving Irish teenager Troy Parrott as Jose Mourinho’s only natural striker aside from Kane.

Whether the Tottenham boss utilises new loan signing Gareth Bale on the wings or through the middle remains to be seen.

Meanwhile, Manchester United have Odion Ighalo as an alternative to Anthony Martial up top.

Marcus Rashford and Mason Greenwood are both capable of moving centrally but the Red Devils may prefer a new addition given their struggles in signing Jadon Sancho.

Alexander Sorloth is wanted by Premier League clubs – here is why