Three travellers who arrived in Melbourne on a dedicated Australian Open charter flight have tested positive to the highly contagious UK strain of Covid-19.

The trio are not players, and have been in ‘hard lockdown‘ in hotel quarantine since they landed.

It is the first time the virulent UK strain has been associated with the tournament.

Health authorities fear an outbreak of the new strain would be devastating to the effort to keep the virus in check until vaccines can be rolled out to the Australian population. Victoria’s health department said the three people infected are a teenage girl and two men in their 20s who flew to Melbourne on a dedicated Australian Open charter flight on January 15.

They returned their first positive tests on January 15, 17 and 18, bringing the total number of infected people linked to the tennis tournament to 10.

On Friday, it was revealed that Spanish tennis player Paula Badosa, the world No.67, had tested positive to coronavirus.

The 23-year-old had previously complained about the tough restrictions on players, brought in after others tested positive on three charter flights to Melbourne.

‘I’m feeling unwell and have some symptoms, but I’ll try to recover as soon as possible listening to the doctors,’ she wrote in both Spanish and English.

Badosa tested positive on her seventh day of hotel quarantine and must spend at least 10 days in isolation from the date of her test.

She is one of 72 players in lockdown after someone from their flight tested positive on arrival in Melbourne.

Victoria now has 33 active coronavirus cases but the hotel quarantine system is keeping it contained so far, with the state enjoying 17 straight days without any local transmission of the virus. 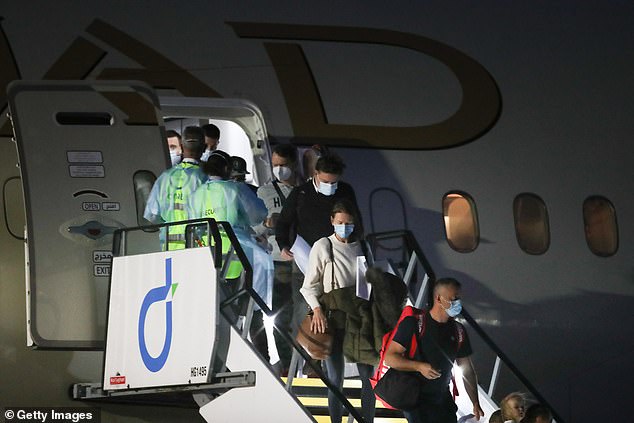 Australia’s move to host the grand slam has proved controversial with a Roy Morgan survey revealing that a third of people want the tennis tournament postponed.

The survey  of 1648 people found just over a quarter, or 26 per cent wanted the tournament scrapped with another 38 per cent saying it should be postponed.

Australia’s Health Department says on its website that Australia’s borders are closed to foreign nationals.

Exceptions are continually being made however, for the tennis tournament and for farmers to fly in fruit pickers from impoverished neighbouring countries to harvest their crops. These exceptions are controversial as thousands of ordinary Australian citizens stranded abroad struggle to return home.

In January, the National Cabinet agreed to halve the cap on returning international arrivals in WA, NSW and QLD to ease pressure on hotel quarantine – and require daily testing for quarantine workers.

The cut was prompted by threat posed by the new, highly infectious UK and South African strains of coronavirus.

The reduction means about 2,500 fewer people will be able to enter the country each week until at least mid-February when national cabinet will review the policy.