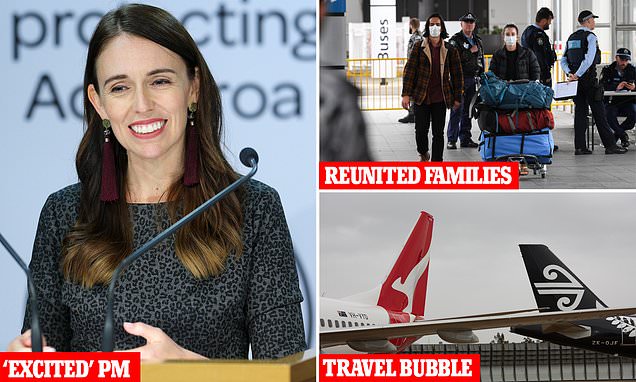 Jacinda Ardern has brushed off participating in a cringeworthy singalong after expressing her delight in welcoming Australians back to New Zealand for the first time in more than a year.

The long awaited trans-Tasman travel bubble between the two countries has been cleared for take-off from April 19 following the coronavirus pandemic.

An excited Ms Ardern appeared on the Today show on Wednesday morning to discuss Tuesday’s announcement with hosts Karl Stefanovic and Leila McKinnon.

‘I can’t believe I’m saying this, but we have absolutely missed you. We want you to come and see us again,’ the Kiwi prime minister beamed.

‘Distance makes the heart grow fonder, that’s definitely the case for us here I think.

The interview ended awkwardly when Ms Ardern refused an invitation from Stefanovic to sing along to classic 1980s Kiwi hit Slice of Heaven.

‘There is absolutely zero chance of me singing along to this track right now,’ she  said.

During the interview, Ms Ardern defended the delays in opening up the travel bubble, insisting they had to get it right.

‘If you think about when we first started talking about having a Trans-Tasman arrangement back between we were talking about the test being 28 days free of any case outside of a managed isolation facility and the time that we have taken to establish this protocol and this arrangement we have learnt so much,’ she explained.

‘We now believe and know that we can safely manage outbreaks without necessarily having that prolonged month-long period in the aftermath of a case.

‘Time has been of benefit to us. I think we now have a regime that will be flexible, but pretty sophisticated, and ultimately it means now we are in a position to welcome you here and to do it safely, which is what we are all so excited about.’