A Queensland couple have been left shocked after discovering a huge two-metre python living in their bathroom drain.

The terrified homeowners discovered the intruder after their en-suite began to flood during a shower.

When the couple began to investigate what could be blocking the drain, they noticed an eye staring back at them from the tiny hole in the floor. 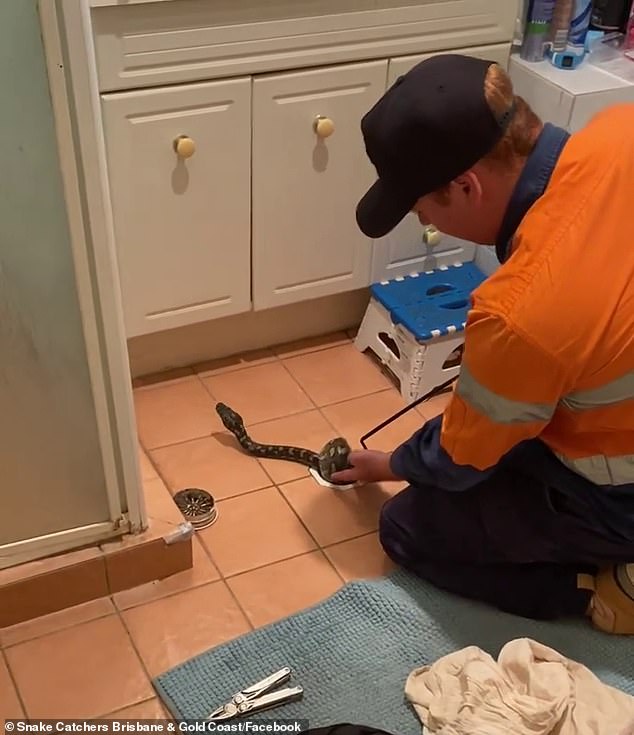 Professional snake handler Bryce from Snake Catchers Brisbane and Gold Coast was called to the Tarragindi property, two hours south of Brisbane, to remove the snake.

Footage showed the moment the snakes was carefully removed from the tiny drain on the bathroom floor.

‘Okay I’m going to move back a bit’, a man is heard saying as the snake takes in its new surroundings. 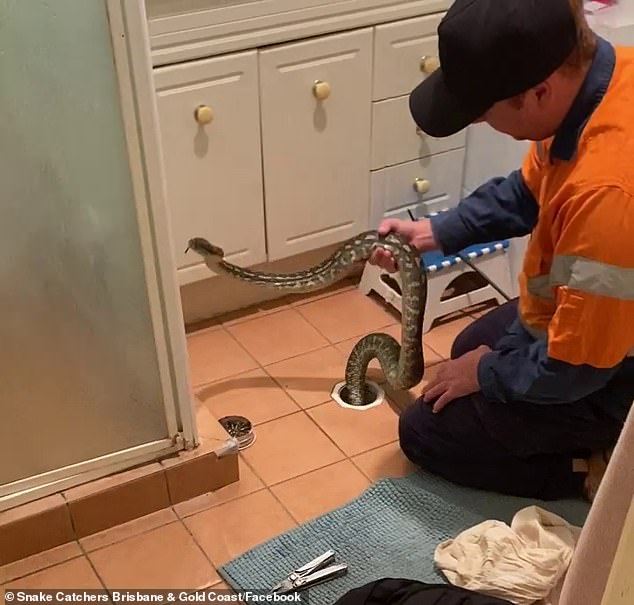 ‘This is not what I was expecting but I’m glad it’s okay’, a woman says.

The incredible footage has attracted hundreds of comments from social media users with some describing it as their ‘worst nightmare’.

‘True fear of mine… I always keep a heavy bath mat over my bathroom floor drain for this reason’, one user shared.

‘Cementing my drains up now’, another joked.

Others questioned how the snake managed to get into the tight spot, one suggesting the python entered a drain from the footpath.

Another said the snake may have slithered in through a break in the drain pipe, or through an inspection hole cover. 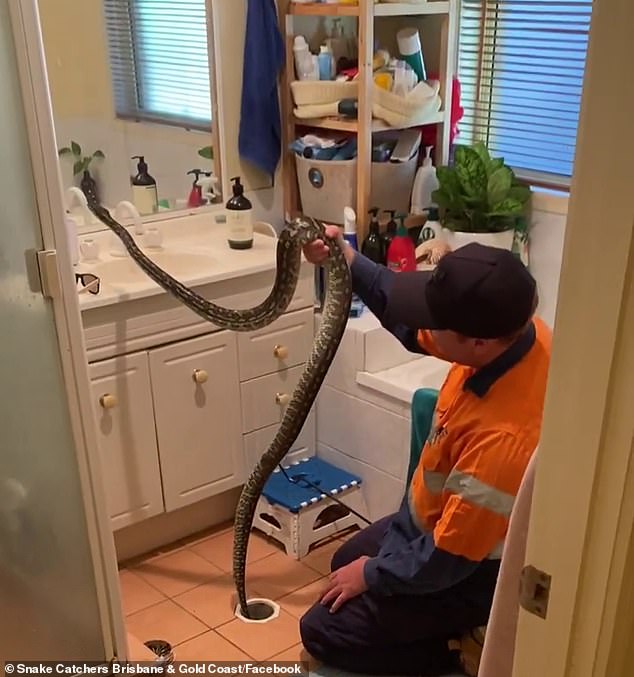 In amazing footage captured of the removal, the python is seen bursting upwards from the small hole and slithering quickly across the bathroom floor

Others said the video had made them think twice about visiting Australia.

‘Australia is not okay. Leave this island to the animals’, one user commented.

‘Go to Australia they say, it’ll be fun, you’ll love it. Nah that’s ok’, another said.

Residents in New South Wales and south-east Queensland have been warned to be extra vigilant of snakes as they seek higher and drier ground after the floods.

The wet conditions have prompted the cold-blooded reptiles to seek safety in residents homes and are commonly found in rafters, sheds and backyards.

How to stay safe during snake season

Remove any debris or woodpiles, cut back long grass and shrubbery, remove leaf litter and block any holes around the outside of your house that may look like a safe spot to hide

Keep bird aviaries and chook pens secure, clean and free of rodents. Ensure you have a fine mesh or shade cloth around the outside of any aviary so our snake friends don’t get stuck in the wire

If possible, keep cats inside and snake avoidance training for dogs can literally be a life saver

Call a professional. Never attempt to catch or kill a snake. This is illegal and snakes are incredibly important to the local ecosystem