A group arrested for an alleged series of child sex crimes at a circus school in the Blue Mountains is feeling “total elation” after the charges were dropped in a Sydney court.

Crucial evidence had been overlooked and the police had “no leg to stand on”, Mr Wrench told AAP.

All seven – including Therese Ann Cook, her brother Paul Christopher Cook, her daughter Yyani Cook-Williams and Clarissa Meredith – had links to a circus school in the Blue Mountains at the time they were arrested.

They were accused of abusing three young boys between 2014 and 2016.

NSW Police say they will review the court’s decision.

Australia’s coronavirus death toll has risen to 28 after a cruise ship passenger on holiday from Germany died.

The tourist aged in his 60s had been on board the Artania cruise ship and was one of 42 people to test positive to the killer disease.

He was taken off the ship to the Joondalup Health Campus in Perth on Monday where he later died.

The cruise ship remains docked at Fremantle harbour and those who may have contracted the disease or are being tested remain in isolation on board.

Around 800 healthy passengers from the ship were able to fly home to Europe on Sunday. 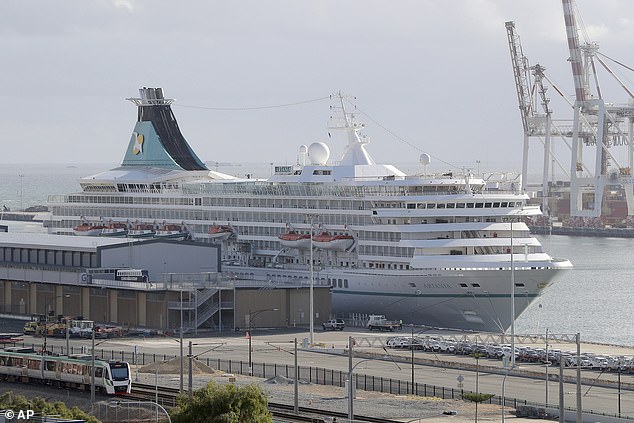 It comes after a 75-year-old man on-board the Ovation of the Seas cruise ship died in Wollongong Hospital on Friday.

A woman, 74, has also died from COVID-19 in the regional town of Albury on the border between NSW and Victoria, it was confirmed on Friday.

Another man, in his 80s, died in Victoria overnight – bringing the state’s total to seven.

There are seven people currently in intensive care and 1,085 cases of coronavirus in Victoria in total.

The overnight increase was only 49 infections though and Victoria’s chief health officer Brett Sutton said the state had seen some success in ‘flattening the curve’ of the spread of COVID-19. 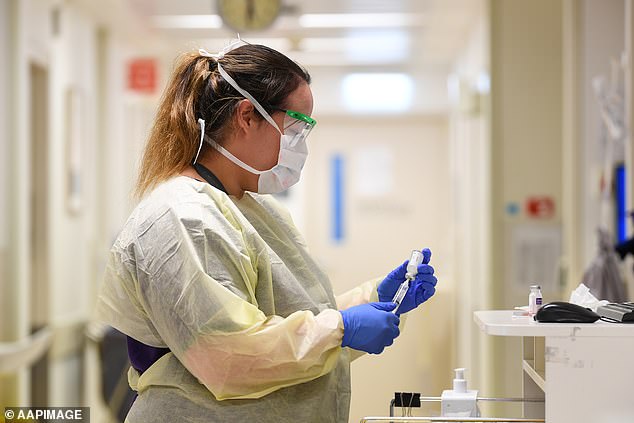 A healthcare worker at a coronavirus clinic in Melbourne on Tuesday. A man has died in Victoria overnight from the virus

‘We need to do more, we have gone from doubling numbers every three or four days to doubling every seven days. It is an improvement,’ he said on Sunrise on Friday morning.

‘The early signs are promising, we need to see how the next couple of weeks ago in terms of physical distancing measures now in place in Victoria.

‘They are strict but they are in place because we need to get on top of this.’

Victoria’s chief health officer also said the state’s health system were working to combat a cluster of cases at Melbourne’s Alfred Hospital – which has led to three deaths and 12 infections.

‘They [the hospital] are doing everything possible to get on top of it,’ Dr Sutton said.

‘It does illustrate the fact that when you are looking after very vulnerable patients in hospital, settings like this, you have to be absolutely strict with everything.’

The national number of cases has reached 5,315. 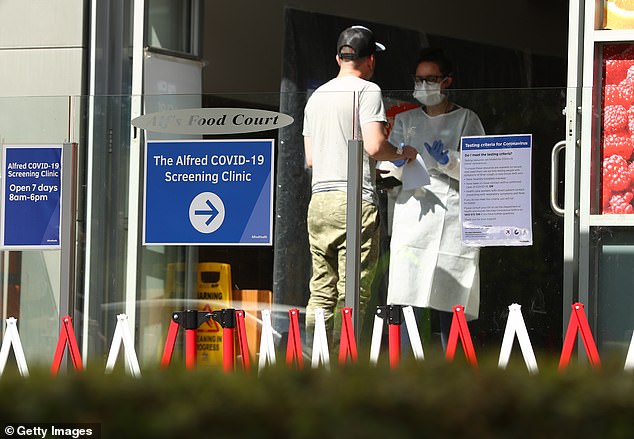 Pictured: A COVID-19 screening clinic at Melbourne’s Alfred Hospital. Victoria’s chief health officer said health officials were working to combat a cluster of cases at the hospital – which has led to three deaths and 12 infections 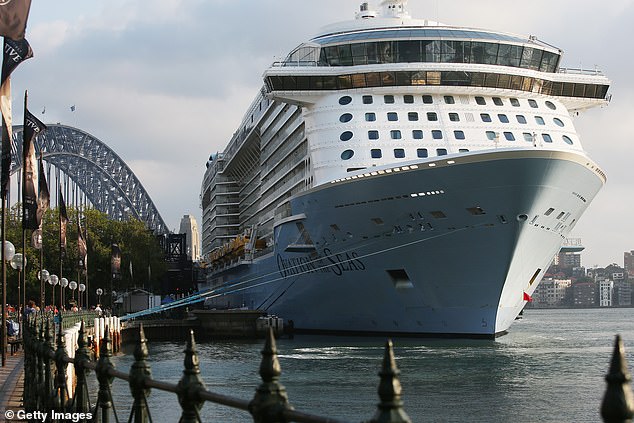 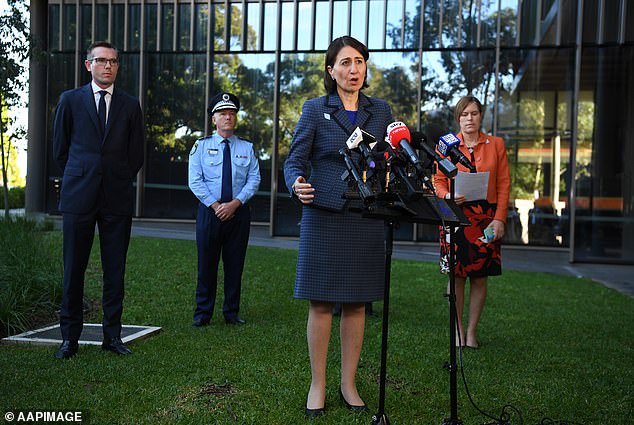 The NSW Government has also announced $10,000 grants for small businesses including cafes, restaurants and gyms in NSW affected by restrictions during the coronavirus crisis. 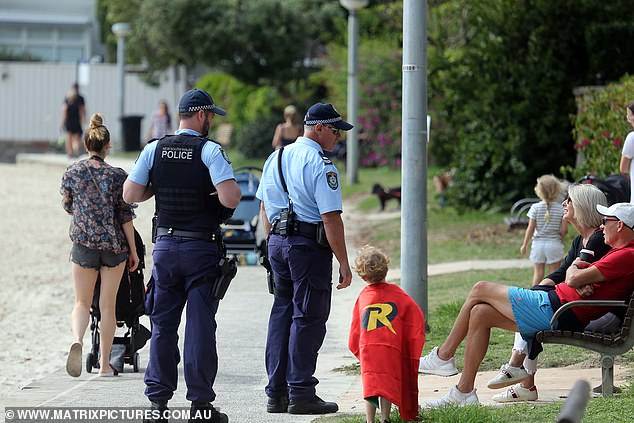 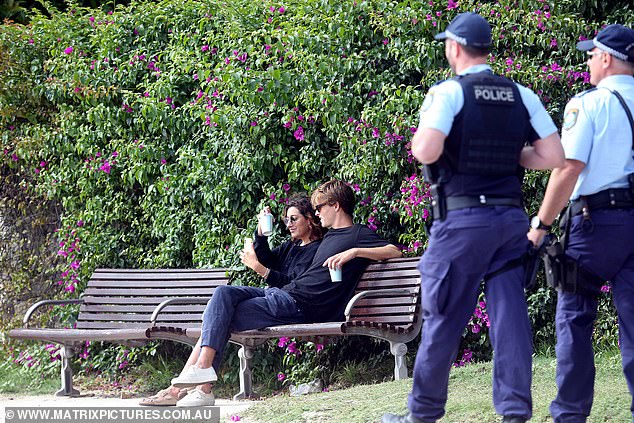 The state – along with Victoria, Queensland, Tasmania and the ACT – issued a stay-at-home order on 31 March.

Residents can only leave their homes for food, exercise, travel to work or school, and medical care.

Ms Berejiklian said she has ‘no intention’ of imposing further restrictions which would prevent residents exercising outdoors or ordering takeaway food.

She said: ‘The time in which these restrictions apply is dependent upon health advice. I hope as the best case we don’t go beyond what we have now.

‘I hope we will adjust to the current restrictions and we manage things in the way we have, because it’s not my intention, not anybody’s intention, to have to impose further restrictions.’

The Premier confirmed the police powers to fine people who break the rules will last for three months.

New South Wales recorded 91 new cases on Thursday. That marks a sustained reduction in the number of new cases per day.

The state has 336 cases with no known source. 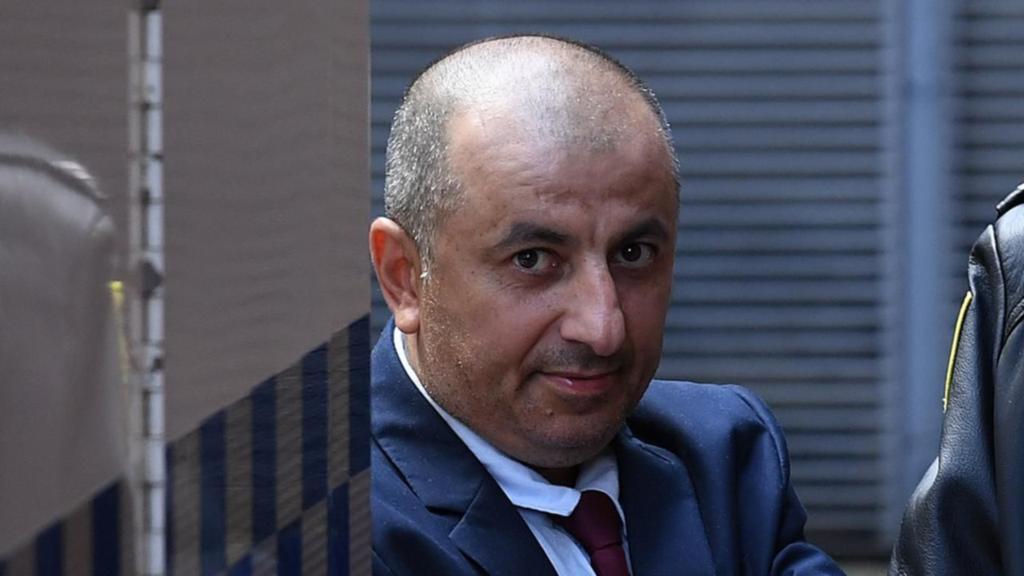 A jury has been discharged after failing to reach a verdict at the trial of a Sydney man accused of drowning his severely disabled stepson in a bathtub a week after he broke up with the teenager’s mother.

He said he discovered 18-year-old Steven, who couldn’t walk or talk, in the bath about 2am and raised the alarm to those sleeping in the house.

After a six-week trial, the NSW Supreme Court jurors retired on Tuesday.

But Acting Justice Peter Hidden discharged them on Friday after they could not reach a verdict.

He adjourned until Monday a bail application by Younes, who is due to face a second trial.

Coronavirus: Some patients may suffer brain damage from bleeds

Some coronavirus patients may suffer brain damage as a result of the devastating infection, doctors around the world are warning.

One Florida patient in his 70s lost the ability to speak at least temporarily, The New York Times reported.

Brain scans of a woman in her 50s taken in Detroit revealed that some of her brain cells had died as a result of a rare complication of the infection.

And similar attacks on the central nervous system have been seen in Italy and China.

While neurological complications so far seem to strike a small subset of the more than 700,000 people who have the virus around the world, the reports paint a worrying picture of its potential for long-term effects. 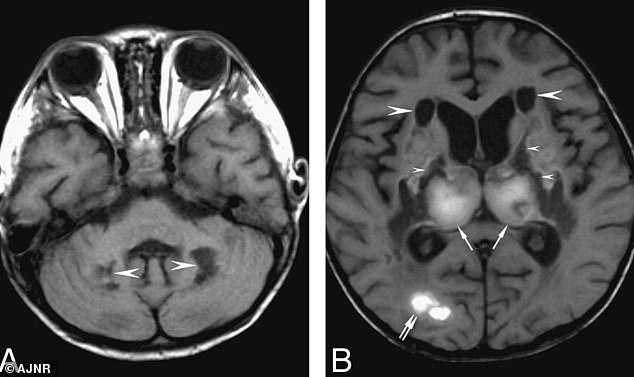 ‘We need to be thinking of how we’re going to incorporate patients with severe neurological disease into our treatment paradigm,’ Dr Elissa Fory, a Henry Ford neurologist who was part of the team that diagnosed the woman in Detroit.

‘This complication is as devastating as severe lung disease.

By the time the woman, a 58-year-old airline worker, checked into a Henry Ford Health System in Detroit, she already had not only the typical cough and fever seen in coronavirus patients, but was confused, disoriented and lethargic.

Doctors there ran a sweeping panel of diagnostic tests on the woman, including screens for the chickenpox virus and West Nile virus.

They drew a sample of her cerebrospinal fluid too, to check for signs that a bacterial infection was attacking her central nervous system.

Everything came back negative.

But her tell-tale signs of fever and cough had pointed to the correct diagnosis. The woman tested positive for COVID-19. 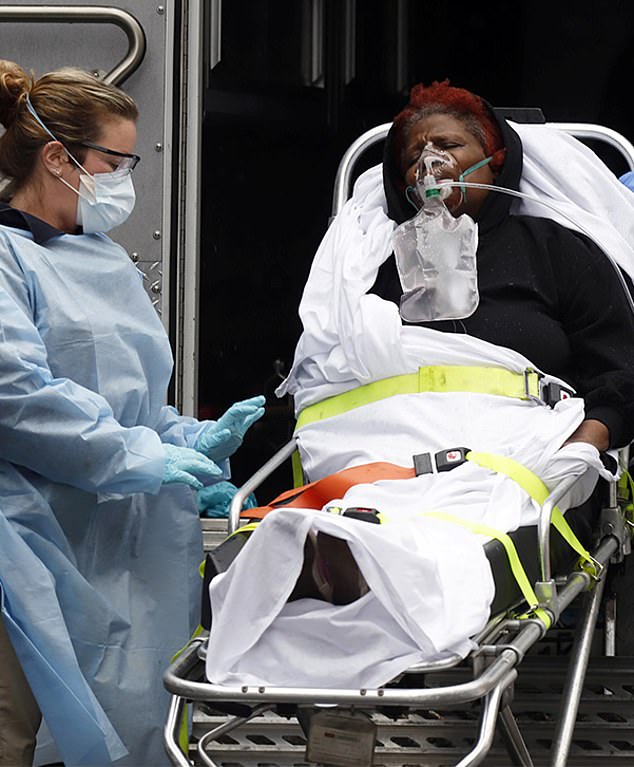 More than 200,000 Americans have coronavirus, and now doctors warn health care workers need to be on the lookout for neurological symptoms of the infection (file)

Neurological symptoms are not considered typical of coronavirus, so the doctors also performed a CT scan of her brain.

Dark spots on the resulting can indicate that parts of her brain are less dense than they should appear in a healthy brain.

That told the woman’s doctors that either fluid had built up in these regions, or chunks of her brain cells had died off.

In particular, the woman’s thalamus showed damage. The thalamus sends sensory information from the far reaches of the body to the cerebral cortex, which processes those signals.

Further scans revealed the woman’s brain also had lesions, or brain bleeds, in her temporal lobes, which are involved consciousness and memory as well as sensation.

Taken together, the scans confirmed the doctors’ suspicions.

‘The team had suspected encephalitis at the outset, but then back-to-back CCT and MRI scans made the diagnosis,’ said Dr Fory.

Encephalitis is a dangerous brain swelling condition that can come on as a result of any number of kinds of trauma, as well as severe infections. 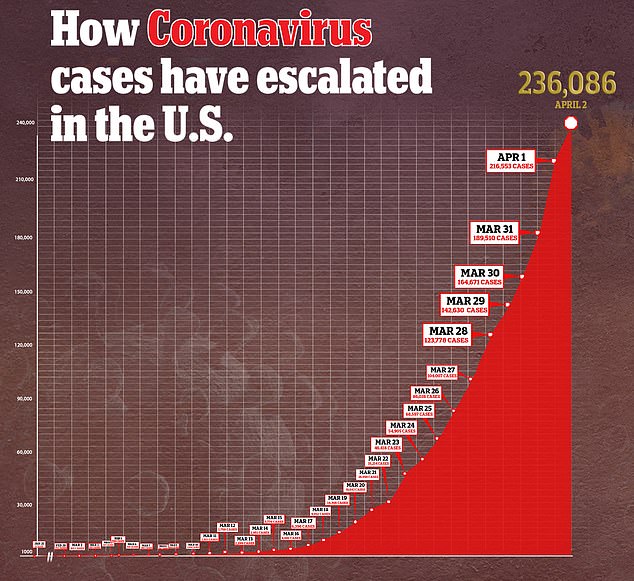 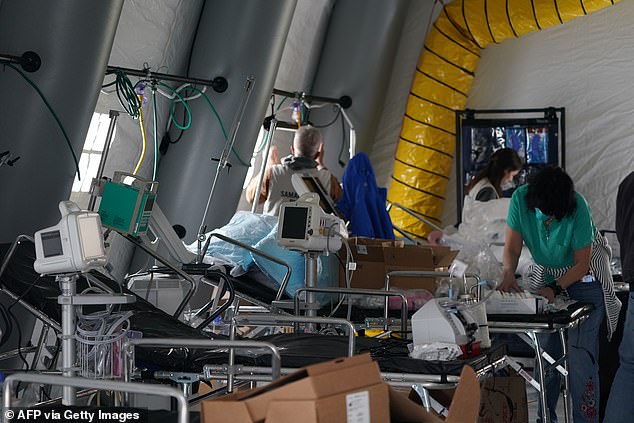 Reports of brain swelling and neurological symptoms have so far been sporadic in US coronavirus patients, but doctors that have seen them warn to watch for confusion  (file) 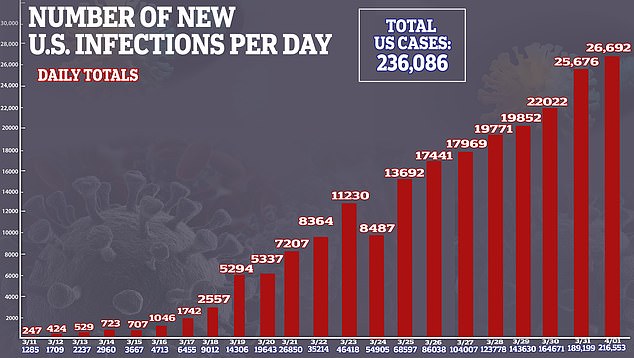 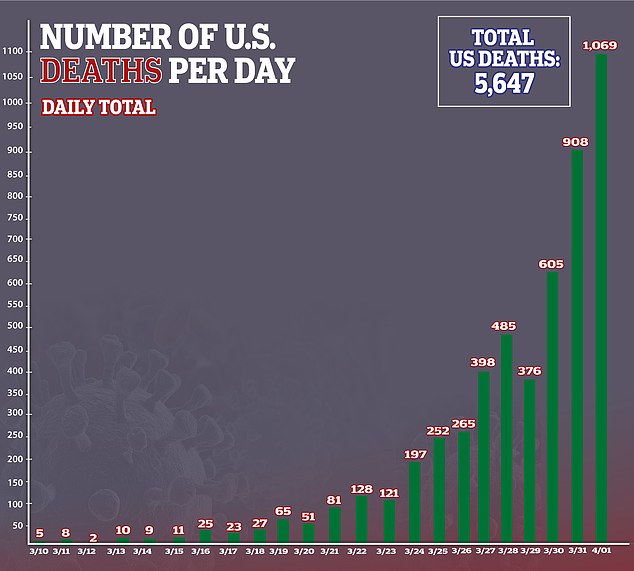 It is periodically seen in – and may be the cause of death for – flu, chickenpox or enterovirus.

Brain swelling may trigger seizures in these patients too, as was seen in the 74-year-old man with coronavirus in Boca Raton, Florida. He also suffered from chronic lung disease and Parkinson’s, but his loss of speech combined with the other symptoms tipped the man’s doctors off to the possibility of encephalitis.

Reports of this complication have only been sporadic in the US thus far, but Italy has seen enough cases for one hospital at the University of Brescia to create an entire ‘NeuroCovid’ unit to administer to patients who had pre-existing or developed neurological conditions.

And Chinese researchers were the first to report the brain complication in some coronavirus patients there.

Now, the Detroit team is warning that US doctors should be on the look out for neurological symptoms in the more exploding number of coronavirus patients across the US.