From a Huf Haus to a former warehouse, four stunning steel-framed homes

Boost your income amid a new dawn for dividends

Joe Biden is riding a wave of optimism following the passage of his $1.9trillion (£1.4trillion) fiscal package.

There may be more to come should the White House manage to steer proposals for a further £1.44trillion of climate change and infrastructure spending through a Congress jittery about debt levels.

As the International Monetary Fund’s spring World Economic Outlook makes clear, the US spending and cash splurge of £3.6trillion and still counting is a gift to output in the advanced world. 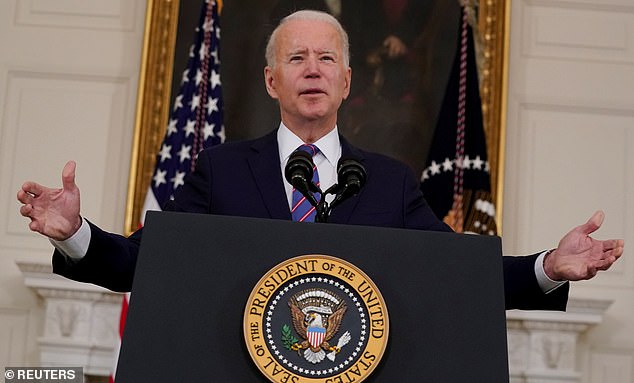 Deep pockets: Joe Biden is riding a wave of optimism following the passage of his $1.9trillion fiscal package

The Fund, which was in despair about global prospects a year ago, has lifted its global growth forecast to 6 per cent this year and 4.4 per cent in 2022.

Among the Western nations, the US will be the first to restore its total output to pre-Covid levels, with growth of 6.4 per cent this year against a 3.5 per cent decline in 2020.

The US has paid a heavy price in pandemic deaths but its policy of keeping the economy open as much as possible and big spending on vaccines has paid off, with three of the big pharma companies backed – Pfizer, Moderna and Johnson & Johnson – in full vaccine production.

If the IMF is right, the UK should get a two-year bounce of 5.3 per cent this year and 5.1 per cent in 2022, bringing output back to pre-pandemic levels.

Britain’s scientific prowess, together with soaring output, should offer Boris Johnson an upbeat platform to launch a Tory re-election campaign.

Only a few years ago IMF meetings were dominated by bleak Brexit warnings. There is barely a mention in the Outlook.

In the Eurozone, growth of 3.8 per cent is expected in 2022, a modest 0.7 percentage point uplift since October.

In contrast the UK forecast is lifted by a whopping 1.9 percentage points to 5.1 per cent. It is hard to overlook the nastier outcomes of Covid.

Loss of output per person in the poorest countries is projected at 5.7 per cent, against 4.7 per cent in emerging markets and 2.7 per cent in the wealthier world.

The worst-affected groups in the pandemic are young and low-skilled workers, as per the UK’s recent unemployment data. Women also suffered across the globe.

In Britain programmes such as Kickstart and apprenticeships targeted at younger citizens have never been more important. Across the world some £11.6trillion has been spent in fiscal support, and a repeat of the Great Depression avoided.

It is sobering to reflect that without the spending and monetary spigots being opened a 3.3 per cent tumble in global output last year could have been three times worse.

There was not much weeping and wailing to be heard as the union flag was lowered over G4S’s London headquarters.

If history is any guide the tears will soon flow. G4S has a troubled reputation in the UK over past failings, from the Olympics to electronic tagging, but for all its faults it is an unheralded part of global Britain.

It employs 25,000 or so in the UK and is the world’s largest security company with staff of more than 500,000 worldwide, earning one-third of its revenues in Asia.

Yet almost unnoticed in lockdown, G4S has been sold to an American outfit less than half its size, Allied Universal, backed by private equity princeling Warburg Pincus.

Having taken on £3.3billion of debt to complete the transaction it can be expected that jobs will go and assets sold.

Vital services such as running UK Justice will be jettisoned. It also means that a foreign owner, beyond oversight by UK directors and investors, will be patrolling the Hinkley Point nuclear plant.

But what about the fat cats who presided over this mess?

Chief executive Thomas Gottstein, who took over in 2020, and his predecessor Tidjane Thiam cannot be left unchallenged.

At the very least there should be clawback of past bonuses.

MARKET REPORT: Cineworld roars back on US Godzilla vs Kong opening