Scores of abandoned British Gas customers say they have paid the price of blind loyalty to costly boiler cover plans.

Money Mail has now received around 100 letters and emails from fed-up policyholders who are spending hundreds of pounds a year on boiler and heating insurance but still can’t get an appointment for repairs in good time.

We have compiled a dossier of your letters and today sent them to British Gas boss Chris O’Shea, asking that he investigates and pays refunds where necessary. 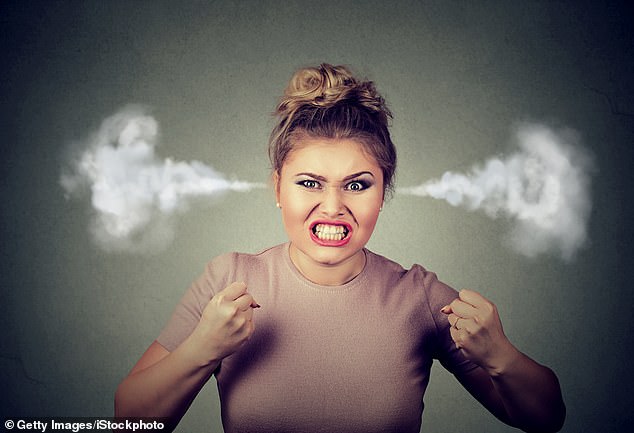 Fuming: We have now received around 100 letters and emails from fed-up policyholders who are paying for boiler and heating insurance but still can’t get an appointment for repairs

The stories include that of a 97-year-old woman who was told to wait three weeks for her boiler to be fixed; and a pensioner who was left without heating in winter.

Last week, we told how 170,000 HomeCare customers were facing long delays for routine services and repairs. Today we reveal that:

British Gas has more than 3.5 million HomeCare customers, who pay for insurance to cover the cost of boiler repairs and annual services. 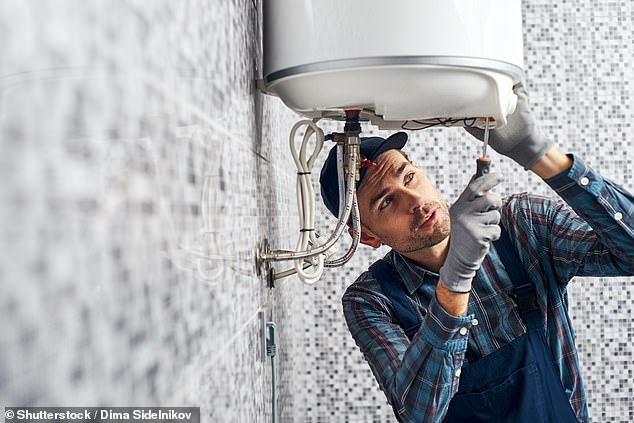 Trust: British Gas has more than 3.5 million HomeCare customers, who pay for insurance to cover the cost of boiler repairs and annual services

They can also choose to spend more to cover extras such as home electrics, drains and plumbing.

Yet lockdown restrictions and recent strike action by engineers have meant many customers are being told they must wait weeks for an appointment, leaving some elderly and vulnerable people without hot water or heating for days.

Money Mail has heard from scores of fed-up customers who cannot get through to the utility giant on the phone, or who have been let down by engineers failing to show up. Some have even had to wait two years for their annual boiler service.

British Gas, which disputes union GMB’s claim that more than 170,000 homes are waiting for repairs, says it hopes to clear its backlog of service delays shortly, now that it has resumed non-essential jobs.

I was left talking to a robot 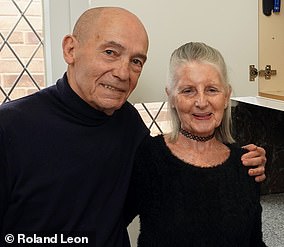 Elizabeth Douton, 79, says it is almost impossible to speak to a fellow human being when she telephones British Gas.

The retired receptionist and her husband, Carlos, 82, recently spent two months trying to have their faulty boiler repaired.

They have been HomeCare customers for more than three decades and paid £273 when they renewed for this year’s cover.

But it took three visits by engineers to fix the problem — and each time, Elizabeth had to do battle with British Gas’s dreaded automated phone system.

Elizabeth, who lives in Birmingham, submitted a formal complaint to British Gas but was told that it would take eight weeks before she would receive a reply.

‘I have had to ring up HomeCare on multiple occasions but most of the time it is impossible to speak to someone,’ says Elizabeth, a great-grandmother of seven. ‘You just don’t feel you are getting the service you deserve.’

Cost does not always add up

Recent research from consumer group Which? found that nine out of ten households would be better off if they ditched boiler cover and instead paid for repairs and services as and when they needed them.

Half of the customers surveyed said they had needed their boiler fixed at some point in the past five years, paying an average of £107.

But with a typical annual service costing about £80, the combined cost was still £101 cheaper than the average boiler cover premium of £288.

More than a third said their boiler hadn’t broken down at all in the past five years — meaning they could save a total of £3,000 if it survived for a further five.

The basic HomeCare One package, which includes an annual boiler service and repairs, now costs a new customer £14 a month if they are willing to pay a £60 excess on claims.

The full HomeCare Four deal, which includes cover for drains, heating and plumbing, costs £23 a month — or £38 if you want to avoid excess charges. But if you can afford to pay for the whole year upfront, the overall cost is cheaper by £12.

Some HomeCare customers have also told Money Mail that delays and problems in booking an appointment mean they cannot get an annual service every year.

Told to wait in the cold at 97 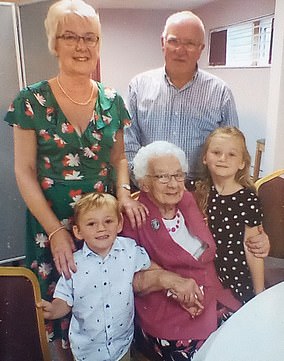 Beryl Farnsworth, 97, lives on her own and has a heart condition.

When her boiler broke down, British Gas said she would have to wait three weeks for an engineer.

Beryl’s son, Graham, had signed the widow up to HomeCare 15 years ago and she pays £360 a year for cover.

However, when Graham, 75, called the British Gas helpline, an automated message could only offer an appointment for April 22.

He waited for 15 minutes to speak to an adviser, who at first said the visit could not be pushed forward.

But eventually the employee spoke to his manager, and an appointment was arranged for the next day.

Graham, who lives near Beryl in Lincoln, believes his vulnerable mother would not have been able to argue her own case without his help.

Last week, British Gas informed the great-great-grandmother that it would be hiking her fees by £20 — but she will not be renewing her cover.

‘I just couldn’t believe that they thought it was acceptable to leave a 97-year-old for three weeks in a cold home,’ says Graham.

And while new customers can pay as little as £264 for the HomeCare Four package, Money Mail has spoken to some households now paying more than £1,100.

New customers are also currently being offered gift cards worth up to £75 if they sign up before May 10.

City watchdog the Financial Conduct Authority wants to put a stop to the so-called ‘loyalty penalty’ that means long-term customers pay far more than new ones.

Under the regulator’s proposals, firms will be free to set prices for new customers but banned from raising fees over time — other than in line with changes to a customer’s risk.

However, these changes are largely aimed at the car and home insurance markets, and it is understood that boiler cover policies will not be affected.

It took 15 months to fix radiators 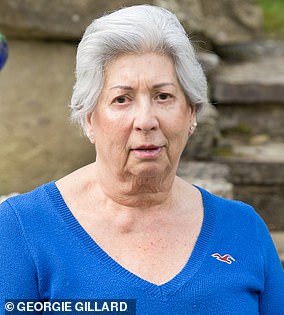 Abandoned: Jill Attfield has been a Homecare customer for 20 years

The widow, 74, from Dorking, pays the firm £1,111 a year for its most expensive HomeCare plan. But it would be 15 months before British Gas resolved the radiator blockage.

In that time, four appointments were cancelled and rescheduled, while on other occasions engineers would arrive with the wrong equipment.

Her floorboards have been pulled up seven times and she has spent £1,000 on fan heaters for her guests.

Jill, who has had HomeCare for 20 years, says: ‘I feel totally let down.

‘I just couldn’t believe it when I saw the HomeCare adverts on television. Why are they trying to get more customers when they can’t look after the ones they already have?’

Accounts for Centrica, which owns British Gas, show that services such as HomeCare made the company a £256 million profit last year — up £4 million on 2019.

The report reveals that British Gas lost 122,000 services customers in 2020 — 3 per cent of its total. In the past decade, the firm has lost a million customers.

The report also claimed the company managed to fulfil more than 97 per cent of essential breakdown appointments, ‘despite the impact of the Covid-19 pandemic’.

The energy giant said it had to cancel all but essential jobs in the third national lockdown, including most boiler services.

A message on the HomeCare website now reads: ‘As restrictions start to ease, we’re able to help customers with non-essential jobs again.

‘However, please bear with us whilst we get back to normal – we’re also working really hard to catch up on appointments we had to cancel over the winter due to the pandemic.’

But homeowners turning their backs on British Gas have told Money Mail they are tired of the pandemic being used as an excuse for delays.

Ongoing strike action from engineers over pay and conditions is also understood to have played a part in the chaos.

You have YOUR say

We have had a HomeCare plan since 1986 and until two years ago, we were very happy with it.

However, our boiler now hasn’t been serviced since June 2019. We had an appointment booked for October 2020, but it was cancelled.

Thank you for highlighting the inefficiency of British Gas’s HomeCare cover. The energy giant should pay compensation to customers it has been taking money from over the past year.

I took out HomeCare in 2010 when my husband died. In 11 years, I’ve only had to call British Gas once – in January this year. I was plunged into such chaos and inefficiency, I wish I hadn’t.

My aunt, 99, pays £28 a month for the service, but when her boiler failed on Easter Sunday she was told she’d have to wait until Tuesday for an appointment.

Eventually, British Gas said we could book a local engineer and it would pay the bill.

We normally have to wait 15 months for our boiler to be serviced through HomeCare.

This means that over a four-year period, we lose one service. If this is the case with all customers, it must amount to a large saving for British Gas.

The firm blames Covid-19 for delays. But I have had to fight for an engineer to visit me for several years now. G. B., Romsey, Hants.

I PAY about £90 a month for HomeCare. My boiler was last serviced in 2019, but when I rang to book an appointment last week, I was told non-essential services were not available.

My husband and I are pensioners. When we needed an engineer, we were told we would have to wait three weeks for an appointment.

British Gas takes £35 a month from my account, even though it does not provide the promised service.

I first contacted the firm in February when a radiator wasn’t working. In the end I phoned a local company yesterday, and they came out today.

One couple took British Gas to the ombudsman last year after the firm took 36 days to fix their fridge and 78 days to repair their dishwasher.

The ombudsman ruled in the customers’ favour and ordered the energy firm to pay them £150 in compensation.

British Gas was also ordered to pay £100 compensation to one customer who had no heating or hot water but was told to wait nine days for a repair.

The homeowner, who had been paying £340 a year for HomeCare cover, cancelled his policy and hired a local tradesman – yet British Gas only offered him a £16 refund.

British Gas says it has now carried out appointments for all customers featured in our case studies in the panel to the right.

A spokesman adds: ‘We’re sorry we’ve had to rearrange some appointments, such as annual service visits, primarily driven by our response to the Covid-19 lockdown — this is in order to safeguard the health and safety of our staff and customers — but we aim to do these as soon as we can.

‘During the lockdown we have focused on emergencies with immediate threat to health, life or safety, including heating breakdowns and uncontrollable water leaks.’