She recently discussed how hard she works to maintain her slim physique.

And Catherine Tyldesley illustrated just this as she made her way to a Manchester gym on Tuesday, while sporting a stylish workout ensemble in what was no doubt a delightful turn of events given the reopening of gyms. 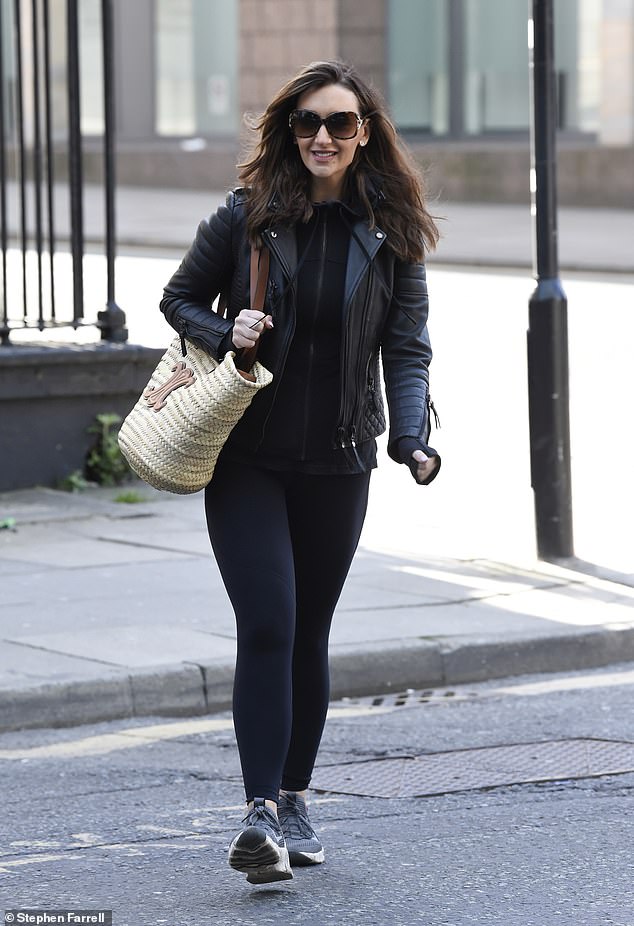 Chic: Catherine Tyldesley, 37, cut a sharp figure in a leather jacket and leggings on Tuesday when she made her way to a Manchester gym

Catherine teamed her leggings and top with a pair of black trainers while keeping all the essentials in a summer-suited straw bag.

She later took to Twitter to discuss her morning workout, telling social media users she’d had a ‘good sesh’ before reflecting on the ‘busy’ day ahead.

She wrote: ‘Great sesh this morning. Busy day ahead. Next stop Zoooooms.’

It comes weeks after the soap star hit back at trolls who accused her of editing her Instagram pictures amid her strive to stay fit. 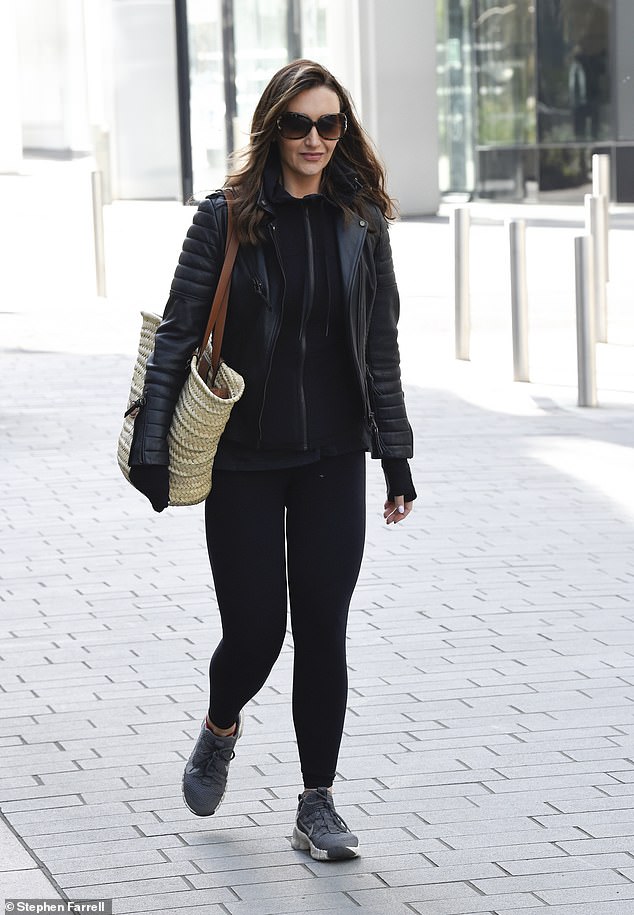 Gym time: The former Strictly competitor – whose nails were painted a crisp shade of white – teamed her leggings and top with a pair of black trainers

Brak out the Boda Skins biker jacket like Catherine

In March, Catherine said that she has to ‘graft’ to stay the size that she is and that she would never use Photoshop as it would be bad for her own and other people’s mental health.

In an interview with The Sun’s Fabulous Magazine, she said she was ‘gutted’ when she was accused of editing her waist back in January when she posted a throwback snap from a cover shoot.

She told the publication: ‘I was gutted, because it is something I’d never, ever do…

‘Not only is Photoshopping bad for that person’s mental health in terms of body dysmorphia, but it also impacts on the mental health of the people seeing that image and comparing themselves.’

She added that she has to work ‘really hard’ to stay a ‘smaller size’ and that staying healthy ‘doesn’t come easy’.

Update: Catherine later took to Twitter to discus her morning workout, telling social media users she’d had a ‘good sesh’ before reflecting on the ‘busy’ day ahead

She also discussed how because influencers so often use filters and apps to change their bodies and faces that sometimes people assume that everyone is doing it.

The star said she has always been self-conscious about her jaw as she thinks it is ‘manly’ and so it upsets her when people accuse her of having filler in it as it has taken her a lot time to feel comfortable with that part of her face.

She said: ‘You just don’t know the inner battle I’ve had to get to where I am now.’

Around 10 years ago Catherine lost a staggering six stone before joining the cast of Coronation Street.

Dropping from a size 22 to a size 8-10, the soap star previously said that she struggled to control her weight as a teenager, and said in 2013 she was motivated to shift the pounds after being told by a director she was too fat for play a leading lady.

Catherine went onto drop another two stone after giving birth to her son Alfie in 2015, and in 2018 unveiled her transformation after a 12-week fitness regime.

Speaking about what motivated her to drop the pounds in a Q&A on Instagram in January said: ‘I couldn’t walk up the stairs without gasping for breath.

‘I had zero energy and my skin was terrible. Educating myself on nutrition was the best thing I ever did.’ 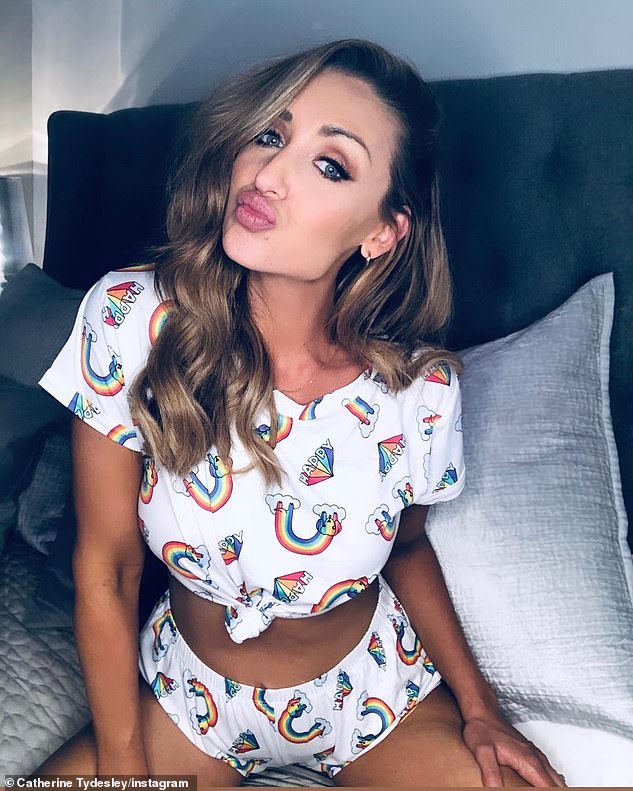 Setting the record straight: Last month, Catherine hit back at trolls who accused her of editing her Instagram pictures

Catherine shared a throwback snap of herself as a teenager, where she was a dress size 22 alongside a photo of her following her staggering weight loss in a bikini on the beach.

Earlier that month, the actress yet again slammed trolls who accused her of Photoshopping her figure on Instagram.

She shared a snap from a vintage shoot but was inundated with comments from followers who claimed she had airbrushed her waist to make herself slimmer.

Catherine said she ‘always had a tiny waist’ as she took to her stories to share a snap in a white corset from her Coronation Street’s character Eva Price’s wedding in 2017.

Alongside the photo in the corset and suspenders, Catherine wrote: ‘Taken while filming Eva’s wedding – exhibit A- tiny waist- ZERO airbrushing- to those negative few telling me waist isn’t real. I work b***y hard to have a waist. B****r off’. 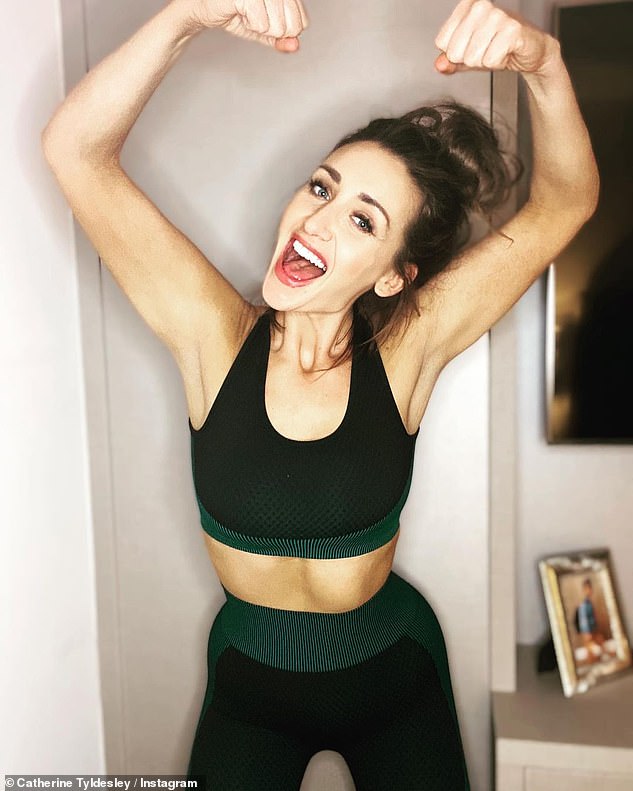 Honest: The former Coronation Street star said that she has to ‘graft’ to stay the size that she is and that she would never use Photoshop

Catherine also recently urged the government to tackle the UK’s ‘obesity crisis’ in the wake of the COVID-19 pandemic.

In March, she accused the government of not ‘giving two hoots’ about obesity, and expressed dismay at Krispy Kreme’s decision last month to offer free doughnuts to Americans that can prove they’ve been vaccinated against coronavirus.

‘I swear to god Boris, if you follow suit and start reducing fast food again knowing how severely obesity affects this virus, I will lose my marbles,’ Catherine said in an impassioned Instagram video. 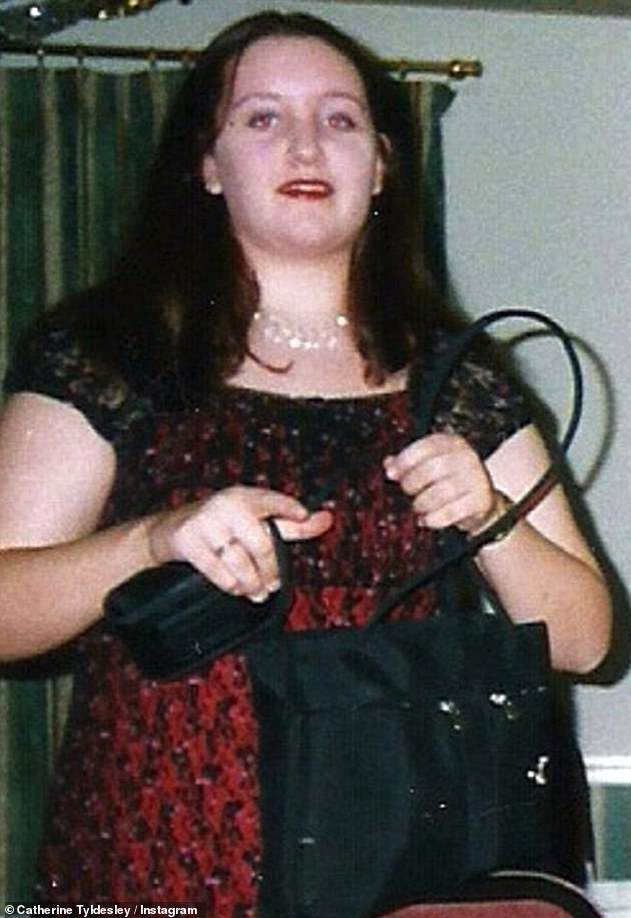 Before: Around 10 years ago Catherine lost staggering six stone before joining the cast of Coronation Street

Catherine said in full: ‘We all know that for years now the UK has been in an obesity crisis, an obesity epidemic. The government don’t seem to give two hoots.

‘We also know that if you contract COVID and you are obese or you are overweight the struggle is much worse. But in America, if you wiggle around your vaccine passport you get a free Krispy Kreme doughnut.’

She continued: ‘Do outreach: free, educational programmes for families that need to know more about nutrition.

‘Leaving gyms until the last minute when statistically they are one of the lowest places that you can catch COVID. My mind is blown.’ 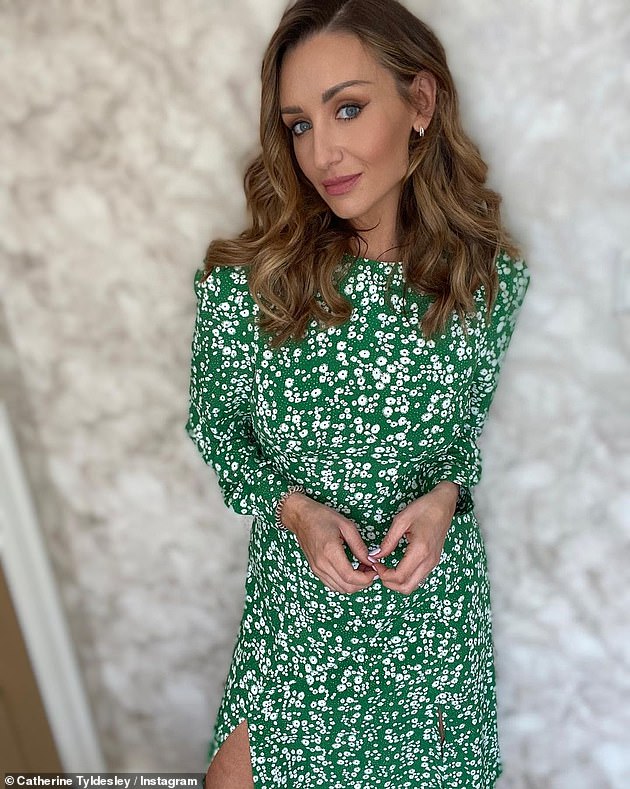 Important: Also in March, Catherine urged the government to tackle the UK’s ‘obesity crisis’ in the wake of the COVID-19 pandemic