Devon Windsor shows off her baby bump while 18 weeks along

She welcomed baby Noa in February and was forced to take the newborn into hospital three times in three weeks due to a series of health scares.

Yet Kate Lawler looked like she had motherhood in her stride after as she headed out on a lockdown walk with her daughter and fiancé Martin on Thursday.

The former Big Brother star, 40, smiled in the sunshine as she donned a denim jacket and cashmere scarf to push her daughter around North London in her pram. 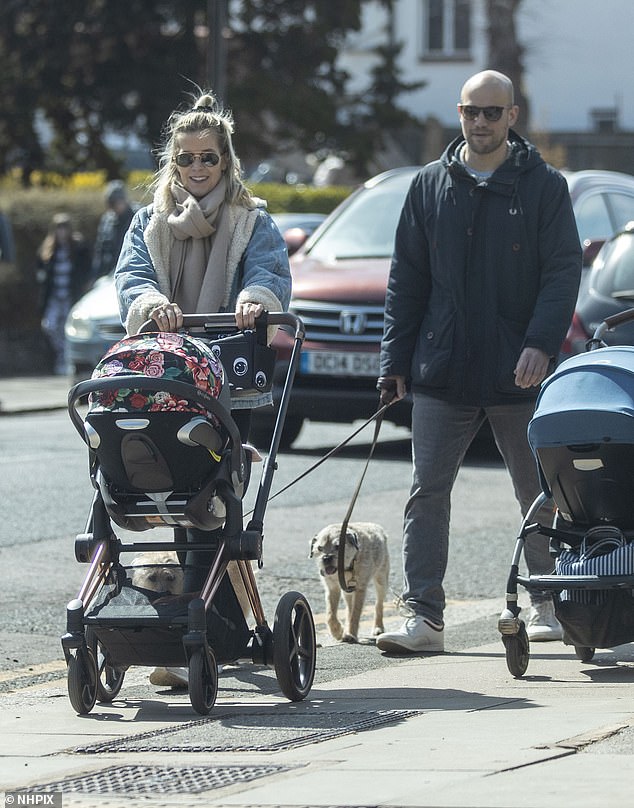 Family fun: Kate Lawler headed out on a lockdown walk in a denim jacket and cashmere scarf with her daughter Noa and husband-to-be Martin on Thursday

The Celebrity Bumps star paired her denim jacket with a pair of black gym leggings and accessorized with some blacked-out aviator sunglasses and a pair of fresh white trainers.

Kate toted a black leather rucksack filled with everything she needed for the outing with her newborn.

The new mum looked stylish as she wore her blonde tresses in a half-up-half-down hairstyle, which she tied with a cute black scrunchie. 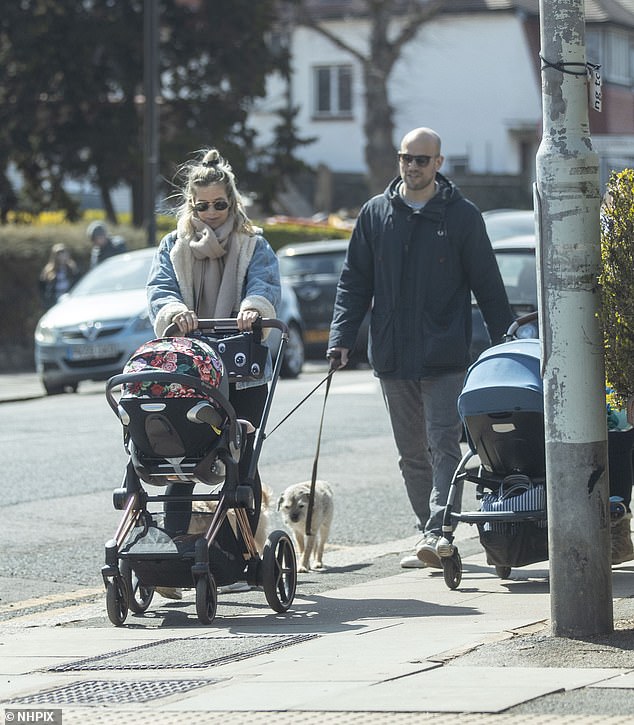 Content: The former Big Brother star smiled in the sunshine as she pushed her daughter around North London in her pram

Kate looked cheerful as she walked along the street with her family and their two dogs, before stopping to chat with a fellow mum.

The former reality star has not had the easiest of times since welcoming her daughter, recently admitting she was ‘at breaking point’ and in ‘the darkest place’. 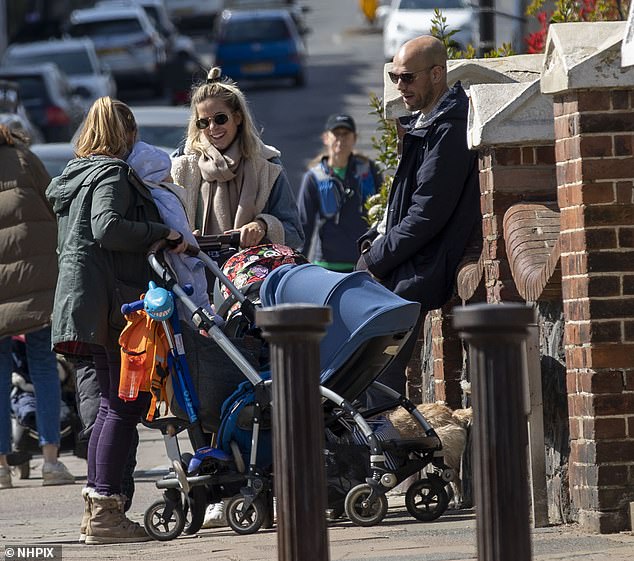 Social stroll: Kate caught up with another new mum as she walked, who had joined the couple’s outing for a chat

Little Noa has been taken into hospital three times in three weeks since she was welcomed into the world, and Kate has documented their journey on social media.

The baby girl was rushed to hospital with a temperature of 38C and underwent a series of blood tests as she fought a bout of Paronychia last month.

‘It’s been the most challenging, emotionally draining and stressful three weeks of my life,’ Kate revealed at the time. 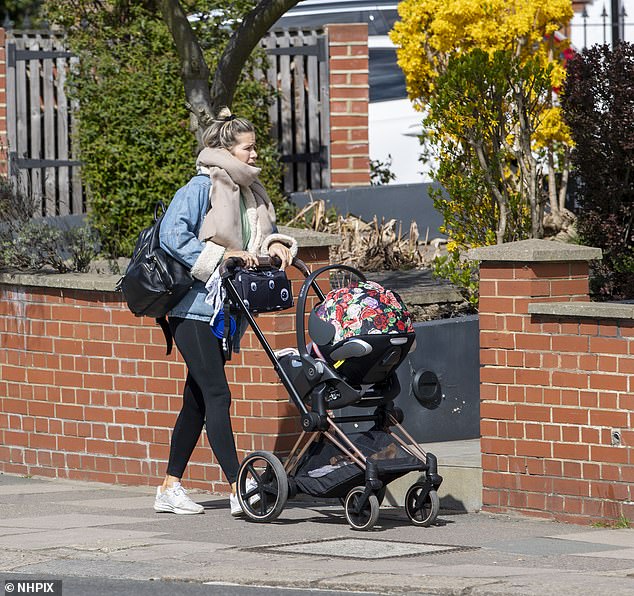 Golden girl: The new mum looked stylish as she wore her blonde tresses in a half-up-half-down hairstyle, which she tied with a cute black scrunchie 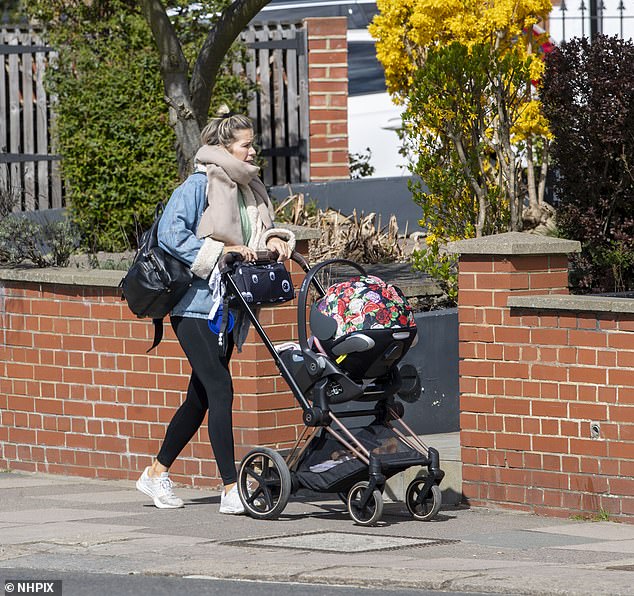 Kate Lawler was positively glowing as she went for a stroll with her newborn daughter, Noa.

The star opted for a casual ensemble, teaming a sweatshirt and leggings with a cool denim coat from Topshop.

The number is perfect for layering thanks to its cosy borg lining and slouchy silhouette. We love the mid-blue and cream colourway too!

Unfortunately, this exact jacket has sold out, but click (right) to find something similar in the current collection.

Alternatively, for more from the denim trend, check out our line-up of lookalikes below.

Earlier this month, Kate admitted she felt guilty about wanting to stop breastfeeding her daughter but said she is considering switching to formula soon, likening breastfeeding to ‘a workout’.

The star told her followers she finds breastfeeding ‘so demanding’ and is often exhausted after.

She penned: ‘I’ve done just over five weeks but considering switching to formula as it’s so demanding and my let-down is so fast I’m basically water boarding Noa every time she latches the poor little potato.’ 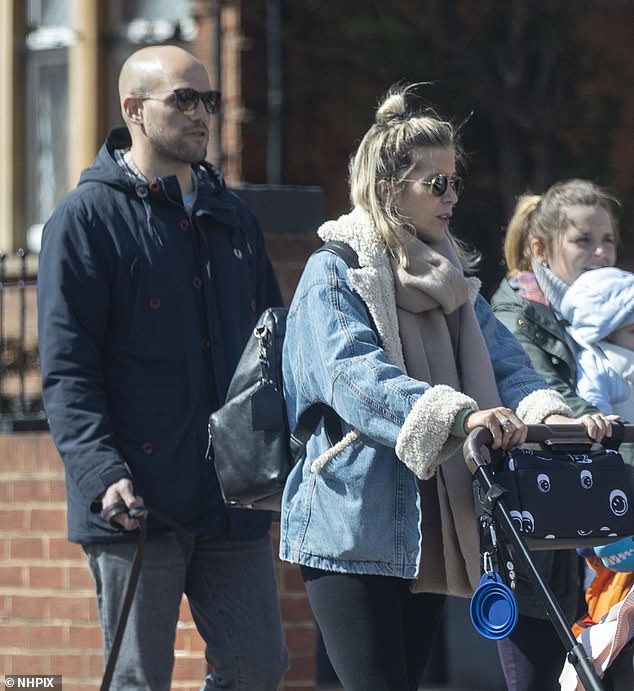 Prepared: Kate toted a black leather rucksack filled with everything she needed for the outing with her newborn

Kate explained it was the ‘pressure from healthcare professionals and others’ that was making her feel guilty.

She said: ‘Expressing for a few minutes beforehand has helped though. I know a happy baby is a fed baby but the pressure from healthcare professionals and others, along with my stubbornness makes me feel guilty about stopping.

‘It’s just so time consuming and does anyone else feel exhausted after feeding? It’s like a bloody workout. No wonder you burn up to 500 calories per feed! Hats off to anyone who does this for longer. Also so many of you have said ‘get Boj (Martin’s nickname) to help’. 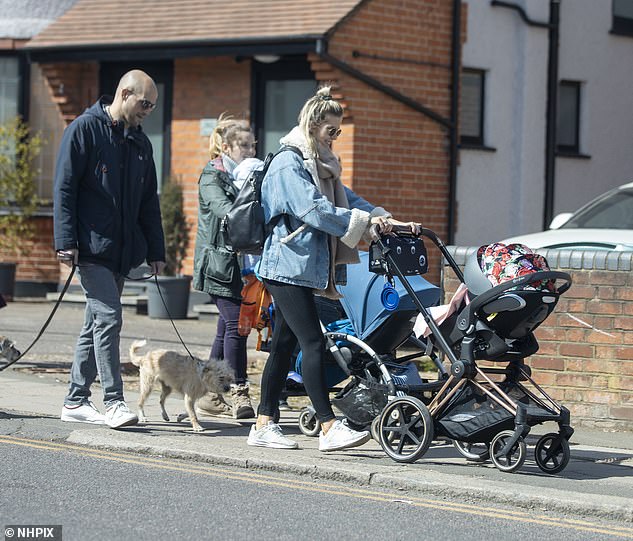 Strong: The former reality star has not had the easiest of times since welcoming her daughter, recently admitting she was ‘at breaking point’ and in ‘the darkest place’

‘Since day one he’s fed Noa a bottle of expressed milk each day and is currently staying up with her until 3am so I can sleep and then take over. I don’t know what I’d do without him.’

Last month, the first-time mum thanked her fans for their ‘love and support’ after she shared an emotional post where she admitted she was at ‘breaking point’

She said she’d been ‘blown away’ by the response to her candid post after she confessed she feels like she’s ‘failing’ while hitting back at trolls who questioned why she shared a picture of her two dogs on Mother’s Day.

Taking to Instagram, Kate revealed other parents had messaged her saying they also felt they ‘couldn’t admit’ how they were feeling. 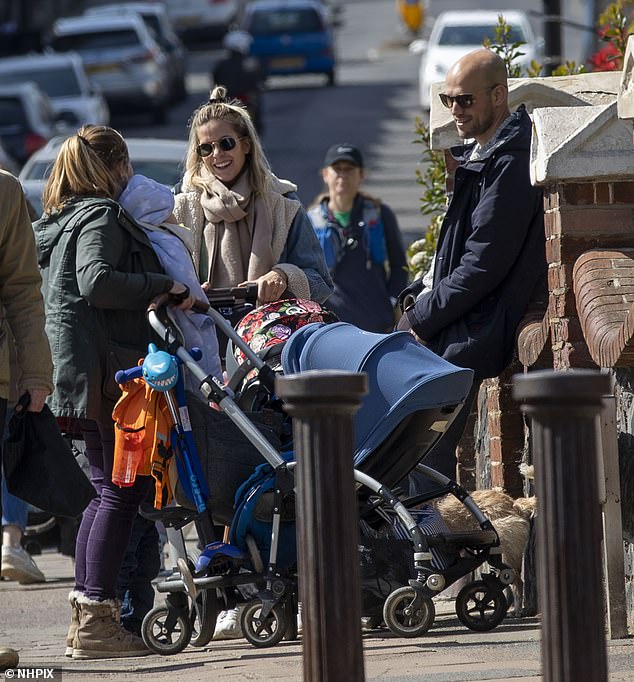 Always smiling: Kate has revealed that little Noa was taken into hospital three times in three weeks since she was welcomed into the world with a series of health scares

Writing a lengthy caption, Kate said: ‘Initially I felt scared about posting it because of a fear I’d be labelled insensitive or ungrateful but THANK YOU, it was the right thing to do.

‘So many people have reached out, sent messages of love, support, advice & understanding. Just because you’ve chosen and been fortunate enough to conceive, carry and birth a little human, it doesn’t mean that it’s all sunshine & rainbows.

‘For some it’s dark, stormy & no parent should have to pretend it’s going well when it isn’t. It’s okay to feel s**t.’ 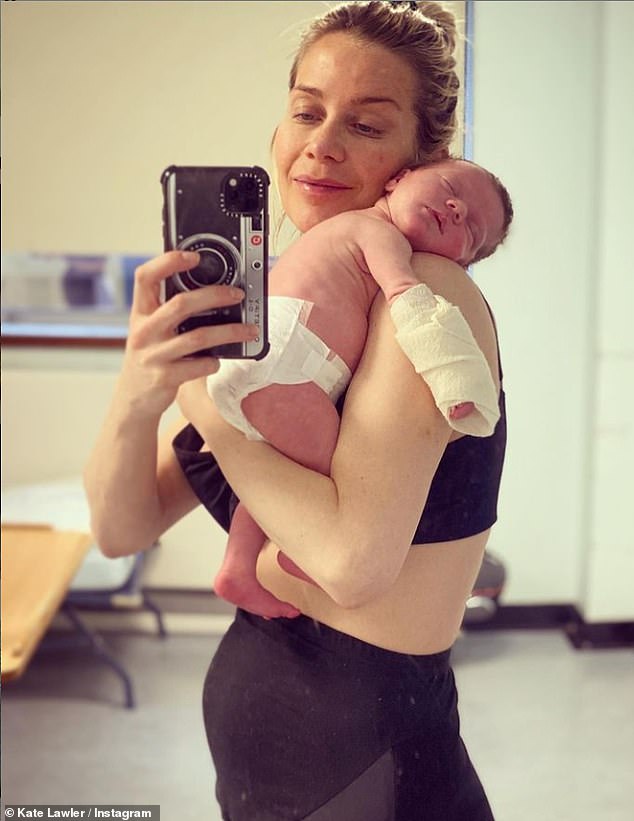 ‘It’s okay to feel s**t’: Kate has spoken candidly to her followers on social media about how stressful and draining she has found motherhood at times