Married At First Sight EXCLUSIVE: The messages that prove Bryce Ruthven was desperate for fame

His wife Pamela Stephenson snapped the comic genius with a plaster over his tattooed left arm after the procedure at a Florida  medical facility.

The Big Yin, 78 – wearing an obligatory mask – was clad in a vest and tartan pants as he took a moment after receiving the vaccine, his sleeve rolled to reveal a tattoo dedicated to his wife. 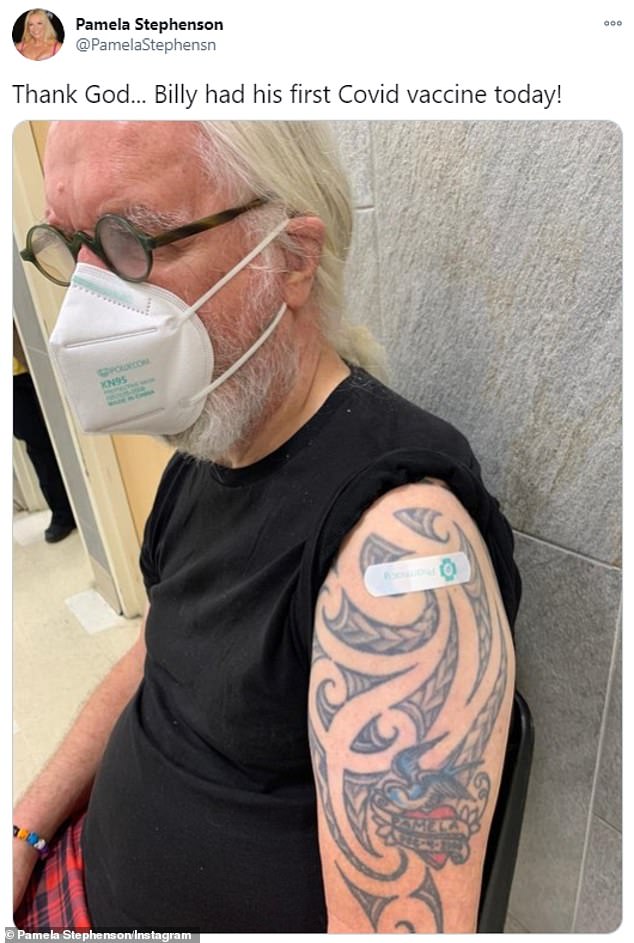 She wrote on Twitter: ‘Thank God… Billy had his first Covid-19 vaccine today!’

Fans were quick to celebrate Billy being given the jab, with one commenting: ‘Right on Billy, and none of your greeting neither. Stay safe brother.’

A second added: ‘Wonderful to know that Billy has gotten the vaccine. He is a real treasure who has to be kept safe. Stay well Mr Connolly.’

While a third wrote: ‘National treasures should always be first in line for saving.’

The couple now live in the Florida Keys as Billy battles Parkinson’s Disease.

He has now retired from stand-up and spends his days fishing, painting and penning his book – which will become an instant best-seller.

Sir Billy – a former shipyard worker – has already written two books – Tall Tales and Wee Stories and Made in Scotland – that touched on his life growing up in Glasgow.

But he’s now writing the complete story of his eventful existence that propelled him from being a welder on the Clyde docks via a stint as a folk singer to become one of the world’s best-loved comics.

He announced his retirement after 50 years in stand-up as he opened up on his battle with Parkinson’s last year.

Billy discussed the disease while at home in Florida in ITV’s Billy Connolly: It’s Been A Pleasure in December.

‘It was obvious from my movement, that I wasn’t who I used to be. And so I had to explain it..just to say that I am not defined by it,” he said. ‘It’s got me, it will get me and it will end me, but that’s OK with me.’

The actor was diagnosed in 2013 with Parkinson’s, a degenerative condition that damages parts of the brain over many years.

Pamela said he was in “great” health and that their move to Florida from New York has been “fantastic” for him.

Pamela, 71 – who has been married to Billy for 30 years – said he is currently writing his autobiography and had found a “new lease of life” through drawing.