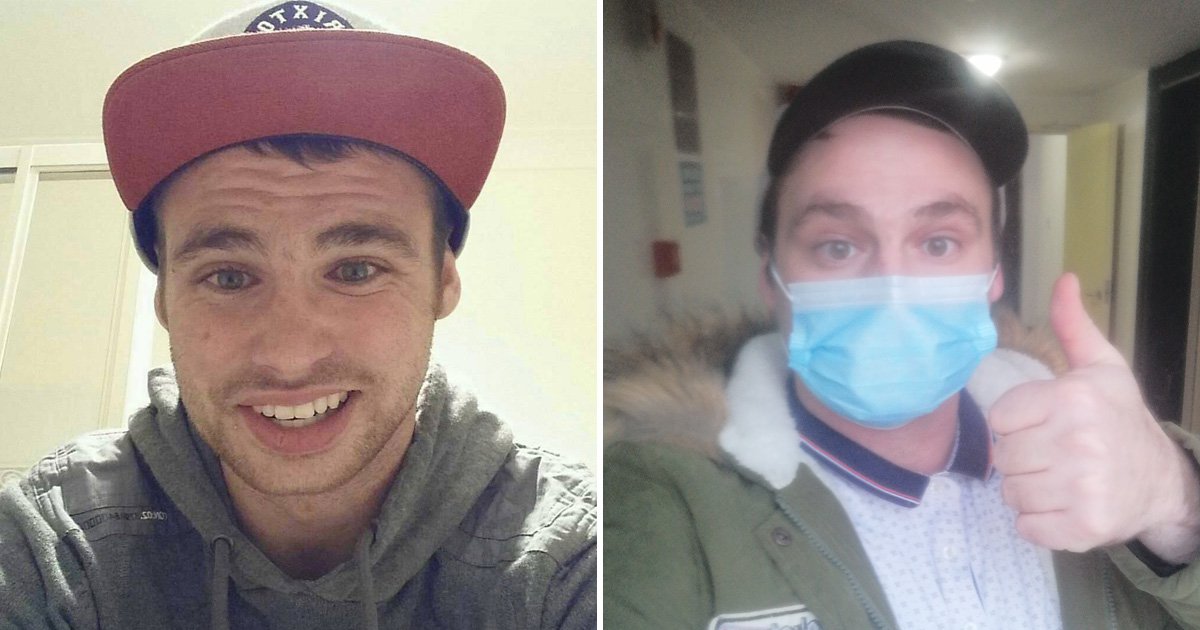 The first Briton known to have caught coronavirus claimed he managed to fight off the deadly illness with a hot toddy.

Wuhan-based teacher, Connor Reed, 25, had been unable to shake off a bad cough and was struggling to breathe when he decided to get checked out at the doctors in December.

But he was stunned to discover that he didn’t have a simple case of the flu, but was suffering with the fatal virus, which has now killed more than 360 people.

Although Connor, originally from Llandudno, North Wales, was terrified he was going to die he refused to take antibiotics and medicine.

The teacher said he’s living ‘proof coronavirus can be beaten’ and has decided to ‘stick it out’ in the epicentre of the outbreak instead of returning to the UK to join others being quarantined on the Wirral.

He told The Sun: ‘I was stunned when the doctors told me I was suffering from the virus. I thought I was going to die but I managed to beat it.

‘I used the inhaler which helped control the cough and drank a hot whisky with honey until that ran out. It’s an old fashioned remedy but it seemed to do the trick’.

Connor, who moved to Wuhan last summer to teach English, said the city has become a ‘ghost town’ with barely any fresh food supplies available in stores.

He added that there is now little opportunity for residents to properly safeguard themselves, as there is no medicine or face masks available in pharmacies.

‘If you go out without a mask the police will arrest you,’ he added. ‘The authorities are really worried about how to contain this and stop it spreading.’

The teacher also claimed the Foreign Office seemed ‘disinterested’ when he informed them he’d been struck with the illness and decided to refuse their offer of a place on an evacuation flight to the UK.

His comments come as a second wave of British evacuees touched down at RAF Brize Norton at 8pm on Sunday.

They will join 83 people already being quarantined at Arrow Park Hospital on the Wirral.

A man in the Philippines became the first person to die this weekend from the virus outside China, where the number of confirmed cases of infection had increased to 14,380.

A University of York student and their relative remain the only two confirmed cases in the UK and the pair are being treated at a specialist unit in Newcastle.

Yesterday the Foreign Office, which has withdrawn some staff from China and closed the British Consulate-General in Wuhan, said it is continuing to work with EU countries to add remaining Britons to any rescue flights they may charter back from Wuhan.

A spokesman for the Foreign Office (FCO) said: ‘The Government is in touch with British nationals who remain in Wuhan, and are doing everything we can to bring them home as safely and quickly as possible.’

In Wuhan, the first patients have arrived at a specially built hospital to treat those stricken with the virus, which that took less than two weeks to build.

Huoshenshan Hospital, and a second hospital with 1,500 beds due to open this week, were built by construction crews who are working around the clock in the city.

Authorities have cut most road, rail and air access to Wuhan and surrounding cities, isolating some 50 million people, in efforts to contain the viral outbreak.

Why is Boris Johnson in hospital and what’s the latest on his condition as he is treated for coronavirus? 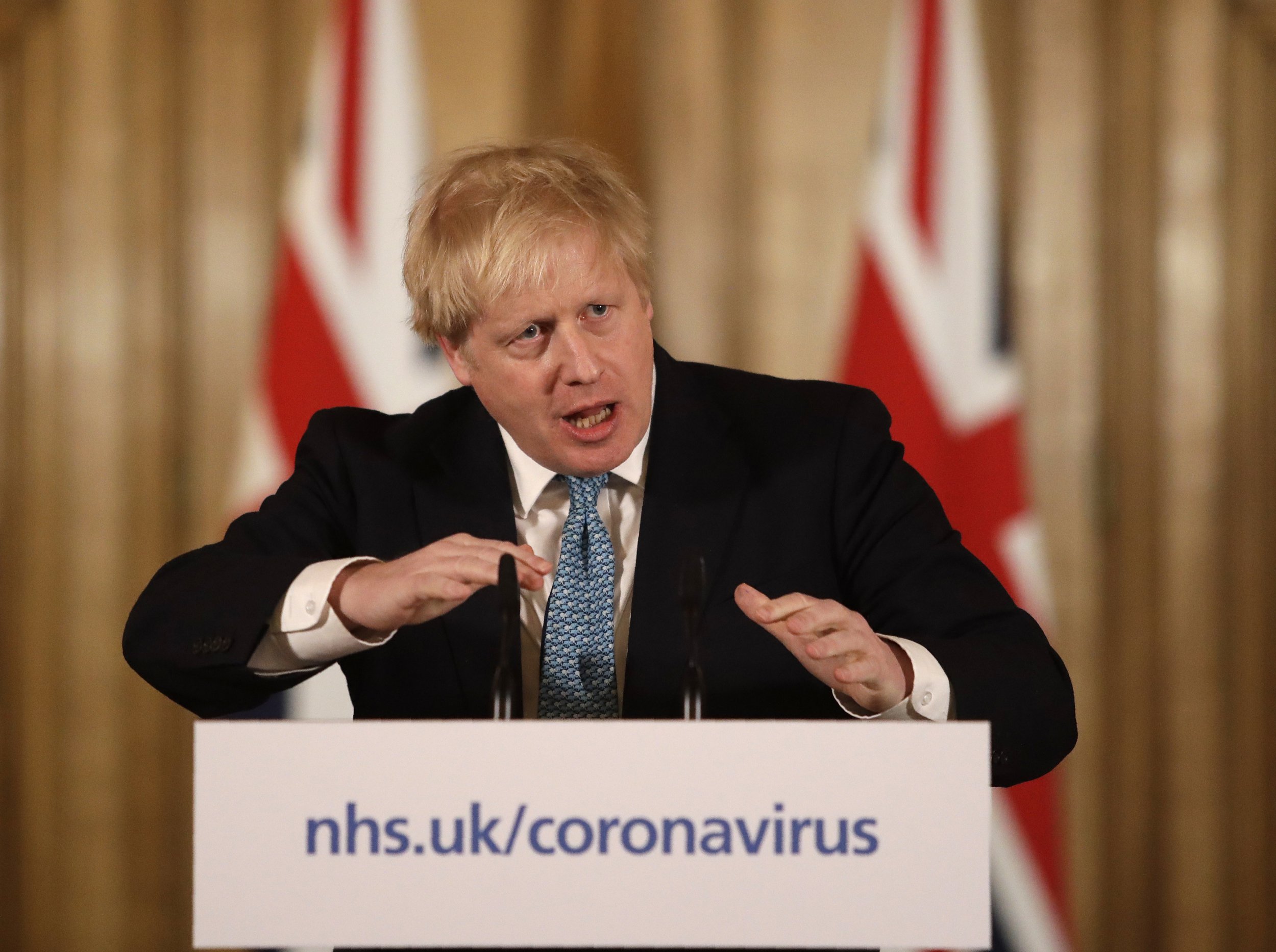 Prime Minister Boris Johnson has spent the night in hospital after being admitted on Sunday 10 days after he tested positive for coronavirus.

A Downing Street spokesperson said that Mr Johnson, who is in an NHS hospital in London, was not admitted on an emergency basis and continues to be in charge of the government.

The Prime Minister first confirmed he had tested positive for Covid-19 on 27 March – saying he had ‘mild symptoms’ of the virus.

So why has he now been admitted to hospital – and what’s the latest on his condition?

Why has Boris Johnson been admitted to hospital?

Boris Johnson was admitted to hospital for tests, after suffering with what Downing Street has referred to as ‘persistent coronavirus symptoms’.

A spokesperson said that it was a ‘precautionary’ measure, explaining: ‘On the advice of his doctor, the Prime Minister has tonight been admitted to hospital for tests.

‘This is a precautionary step, as the Prime Minister continues to have persistent symptoms of coronavirus 10 days after testing positive for the virus.

‘The Prime Minister thanks NHS staff for all their incredible hard work and urges the public to continue to follow the government’s advice to stay at home, protect the NHS and save lives.’

The Prime Minister initially said that his symptoms were ‘mild’ when he confirmed that he had tested positive for Covid-19.

Although he was initially set to self-isolate for seven days, he was still showing symptoms the day before his quarantine period was set to end.

He said in a video on social media: ‘In my own case, although I’m feeling better and I’ve done my seven days of isolation, alas I still have one of the symptoms, a minor symptom, I still have a temperature.

‘And so in accordance with Government advice I must continue my self-isolation until that symptom itself goes.’

Public Health England has advised anyone with a high temperature lasting longer than seven days should call 111 and not immediately return to their normal routine.

However it says a cough can persist for several weeks despite the infection having cleared – and does not mean people have to self-isolate past seven days.

MORE: Huw Edwards urges public to ‘take care’ after being hospitalised with pneumonia

Four arrested after man, in his 20s, stabbed to death ‘with machete’ 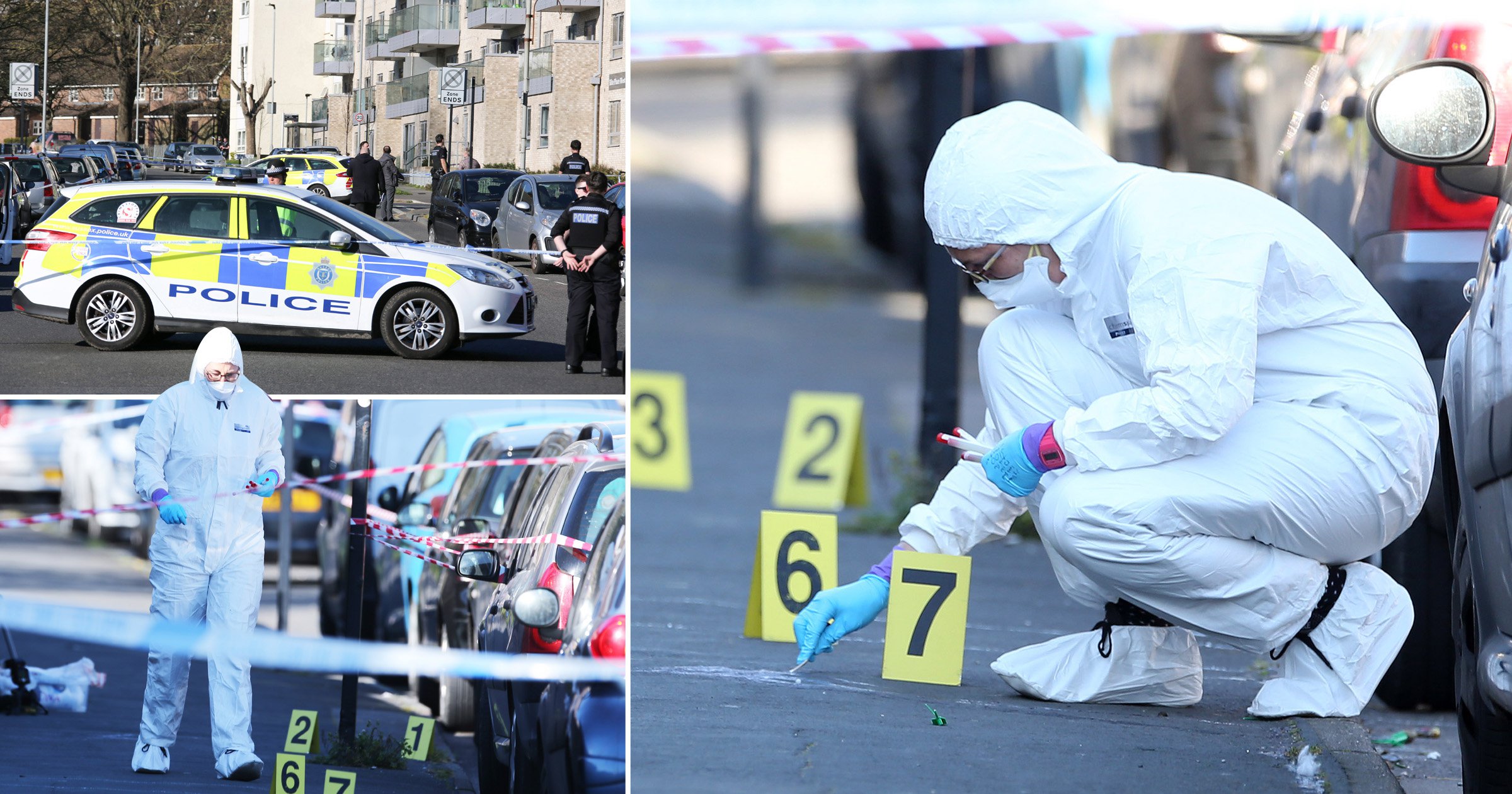 Four men have been arrested on suspicion of murder after a young man was fatally stabbed in Brighton during the coronavirus lockdown.

Police were called at about 2.30pm on Sunday to a suspected machete attack, in the Whitehawk area of the city.

A man, believed to be in his 20s, was taken to Royal Sussex County Hospital. He was pronounced dead just a few hours later.

One witness said: ‘I saw a man come out of a house and it looked like he got whacked over the head.’

The four suspects were taken into police custody for questioning last night.

Brighton and Hove Police posted an update on social media reminding locals to stick to government guidelines despite the warm weather.

The force said ‘the matter is under control’ and urged people in the area to ‘please observe Government guidelines and stay away from the area’.

Detective Chief Inspector Alex Geldart, of the Surrey and Sussex Major Crime Team, said: ‘Our thoughts are with the victim and his family at this very difficult time.

‘This is believed to be an isolated incident and we have four suspects in custody; we are not seeking anyone else.

‘This is a fast-moving investigation and I’d like to urge people to refrain from speculating on social media.

‘If you saw what happened, or if have any information which you think could assist in our investigation, please contact us.

‘Local residents can expect to see a significant police presence in the area as our enquiries continue, and I’d like to thank everyone for their patience and understanding.’

Anyone with any information about the incident is urged to report it online or call 101, quoting operation Heathland. 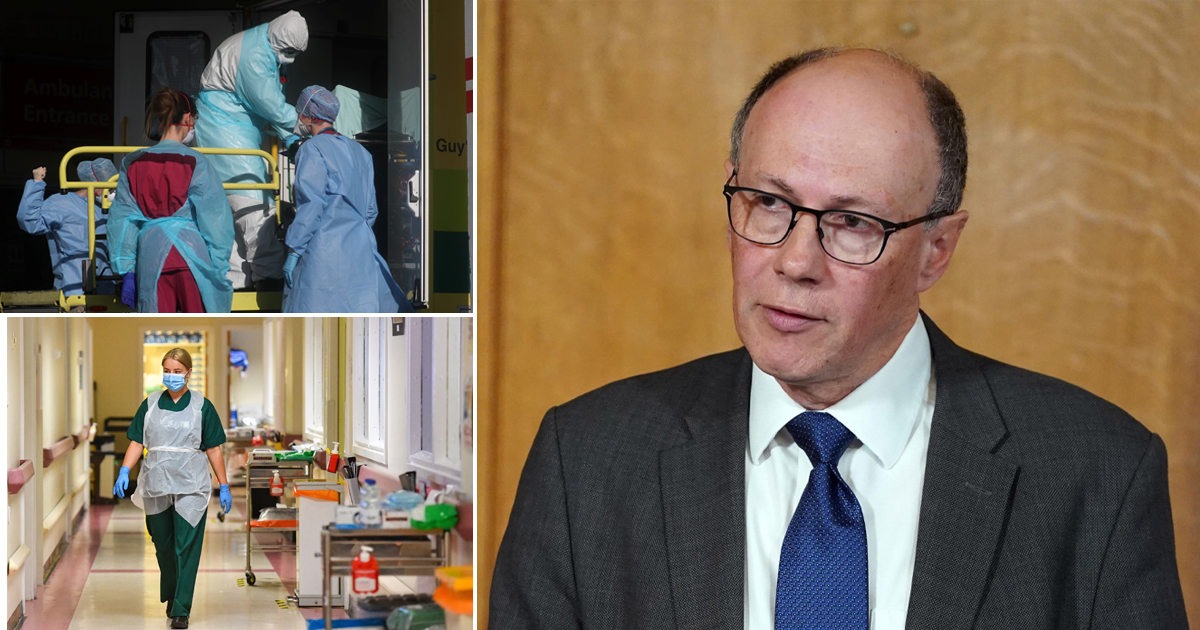 It comes after concerns were raised in an open letter signed by more than 400 disability charities and campaigners claiming treatment ‘should not be influenced by how our lives are valued by society. NHS England director Professor Stephen Powis and chief nursing officer Ruth May issued a joint statement to mind minds at rest.

The pair said the country’s health service ‘will always seek to fully protect the rights of people with disabilities, now and throughout the course of this global pandemic’. The initial letter was organised by disability adviser and head of reform initiative Social Care Future Neil Crowther and sent out to Health Secretary Matt Hancock, NHS England and the British Medical Association

Published on Friday, the letter said pre-existing health conditions or impairment should not play any part in clinical decision-making regarding disabled people’s access to coronavirus treatment. Its signatories said disabled people have the right to be involved in decision-making about how they are treated in hospital and that ‘decisions should never be made without our involvement, or consideration of our best interests.

The letter added: ‘The fact that we might have significant levels of social care and support needs, or that we may do so in future as a result of the pandemic, should not make health staff think that we will not benefit from treatment.’

It called for any guidelines regarding the assessment of provision and care for disabled people during the crisis to be developed in collaboration with advocacy groups.

For all the latest news and updates on Coronavirus, click here.

In their response, Prof Powis and Ms May said: ‘The NHS endorses and fully supports the principles set out in this letter.

‘They mirror the NHS constitution which is clear that we should deliver care and support in a way that achieves dignity and compassion for each and every person we serve.’

They added that decisions about the best course of action, treatment and care pathways are always made between a patient and their doctor.

According to charity Scope there are 13.9 million people living with a disability in the UK.

This week, a GP surgery in Wales sparked outrage after it sent a letter to people with serious health problems to complete a ‘do not resuscitate’ form in case their conditions deteriorated due to coronavirus.

Llynfi Surgery in Maesteg, South Wales, contacted people with illnesses such as incurable cancer and motor neurone disease and said indicating they would not want to be resuscitated had ‘several benefits’.

It said people with life-limiting illnesses were at much higher risk of Covid-19 and were ‘unlikely to be offered hospital admission’ and ‘certainly will not be offered a ventilator bed’.

The surgery later apologised for causing distress and the local health board issued a statement saying that the communication had not been sent out by them.

Chrissy Teigen says she feels like a ‘Real Housewife’ in quarantine