A majority of American adults either believe, or are unsure, about a common piece of misinformation regarding the COVID-19 pandemic, a new survey finds.

The Kaiser Family Foundation (KFF) Vaccine Monitor found 78 percent of American adults had heard of and either believed or were unsure about one of eight false claims about the pandemic.

Claims included the government is exaggerating Covid deaths, the vaccines cause infertility or that the anti-parasite drug ivermectin is effective at treating Covid.

Nearly a third of Americans either believe or are unsure about four or more of the false claims. 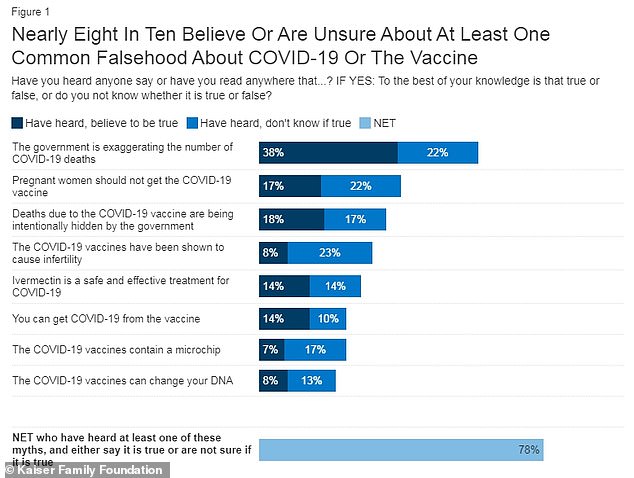 Nearly 80% of Americans believe or are unsure about at least one falsehood about Covid, with the most common being that the government is exaggerating overall death totals 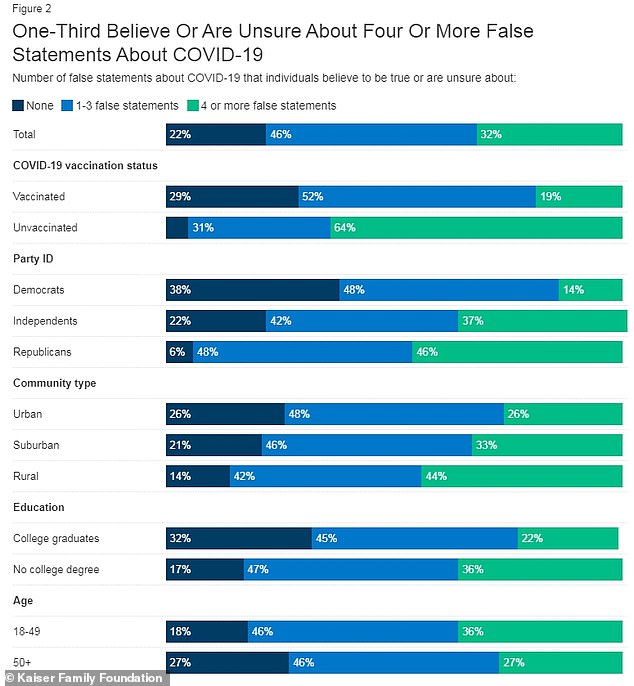 People who believe or are unsure about falsehoods about Covid are most likely to be unvaccinated, Republican, young and non-college educated, the survey finds

The most commonly believed piece of misinformation is that the government is overreporting Covid deaths, with 38 percent believing it, and 22 percent unsure if it is false.

Some also believe the government is covering up deaths from the Covid vaccines, with 18 percent believing it to be true and 17 percent reporting that they were unsure.

Another common piece of misinformation is that pregnant women should not get the COVID-19 vaccines, which 17 percent believe and 22 percent were unsure about.

Pregnant women were not always recommended to get the vaccines like the rest of the population was, though.

Initially, the Centers for Disease Control and Prevention (CDC) recommended women to speak to a doctor before getting their shots, and did not issue a blanket recommendation.

That recommendation came over summer, but pregnant women are still well behind the rest of the nation’s pace.

According to the CDC, 35 percent percent of pregnant women are fully vaccinated, half of the pace set by the general population of adults – at 70 percent fully vaccinated. 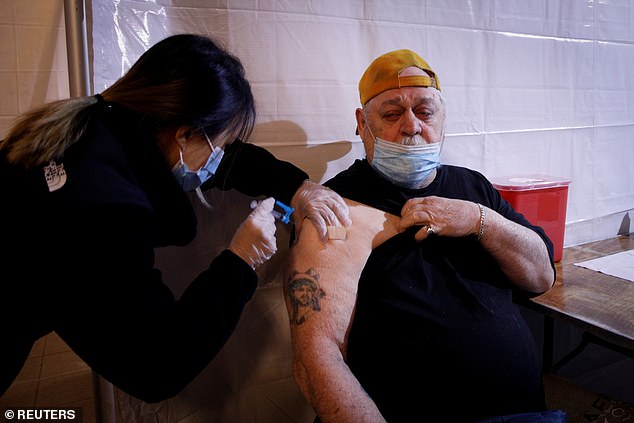 Fighting against misinformation to convince Americans to get vaccinated or to follow Covid protocols has proved to be a challenge for public health officials throughout the pandemic. Pictured: A man in New York City, New York, gets vaccinated for COVID-19 on May 12, 2021

Other falsehoods about the vaccines that people believe include that you can get COVID-19 from the vaccine, that the vaccines contain microchips or that the jabs can change a person’s DNA.

In total, the KFF team found that 78 percent of adults believe at least one of these falsehoods, and 32 percent believed four or more.

An overwhelming number of unvaccinated people have fallen for Covid misinformation, with 95 percent reporting they either believed or were unsure of at least one falsehood.

Many vaccinated people, 78 percent, also were found to believe a falsehood about the jab.

Republicans, 94 percent believing at least one falsehood about the pandemic, were more likely than Democrats, 62 percent, and independents, 79 percent, to have fallen for misinformation.

Those who fall for misinformation are also younger and less educated, on average.

The monitor also asked respondents what news sources they received their information from.

Those who frequented right-leaning news sources like Newsmax, One America News and Fox News were more likely to believe vaccine falsehoods than those who use liberal-leaning sources of news like CNN, MSNBC and NPR. 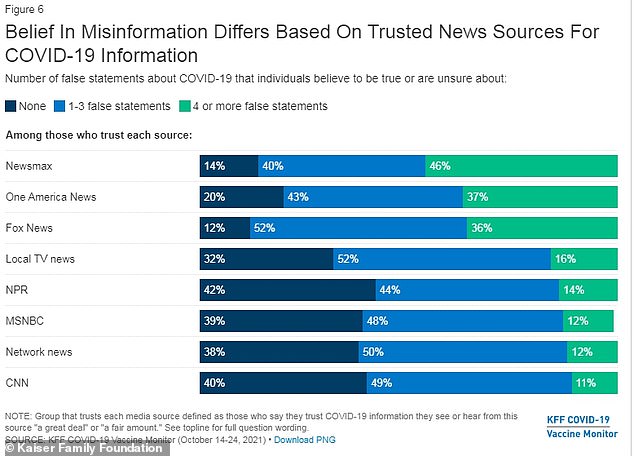 Those who believe or are unsure about falsehoods about COVID-19 are more likely to get their news from sources like Newsmax, One America News or Fox News, the survey finds

Fighting to break American adults of these falsehoods has proved to be a challenge for health officials in getting people to follow Covid protocols and get vaccinated.

While the U.S. has reopened now for the most part, early on there was largescale backlash to pandemic related lockdowns and school closures.

Now, with the vaccines available, many American are still hesitant to receive them despite widespread efforts to get people jabbed.

The KFF Vaccine for October found that 16 percent of Americans will ‘definitely not’ get the jab, the most since the shot became available in December.

As of Monday afternoon, the CDC reports that 80 percent of American adults have received at least one dose of a COVID-19 vaccine, and 70 percent are fully vaccinated.

Will the battery in my heart implant run out? DR MARTIN SCURR answers your health questions