An eight-year-old boy is battling a life-threatening condition that will kill him, unless his family can find a blood donor.

Alfie Pinckney, of Exeter, has been fighting aplastic anaemia ever since he was five.

The condition is getting worse and his father fears he will die because at some point Alfie’s body will start rejecting the treatment.

Doctors say a bone marrow transplant would reboot his immune system, allow him the chance of a normal childhood.

But finding a donor has so far proved unsuccessful, with no-one in his family proving to be a perfect match.

Mr Pinckney, a former real estate investment manager who quit his job to look after Alfie, and the rest of his family have now launched a nationwide appeal in hope of saving his son’s life.

People can get tested by joining a stem cell registry and taking a swab test that is sent to them in the post.

They are hoping for someone of Chinese Western origin to come forward, as Alfie’s mother Lily is from China.

Mr Pinckney, 44, told MailOnline: ‘We’re living with this condition where he can’t do contact sports, he can’t live a normal life and he’s not not getting any better.

‘The time span between transfusions is shortening and he could end up needing them every day. At some point his body will start rejecting them.

‘So we’ve come to the point now where we’re desperately seeking people, especially of Chinese Western origin, to come forward to have a simple test.’

He warned Alfie will die without the bone marrow transplant. 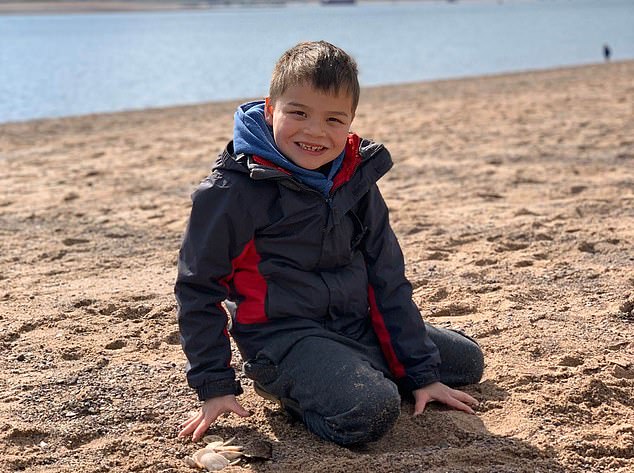 Alfie Pinckney, from Exeter, has been fighting aplastic anaemia since he was five years old 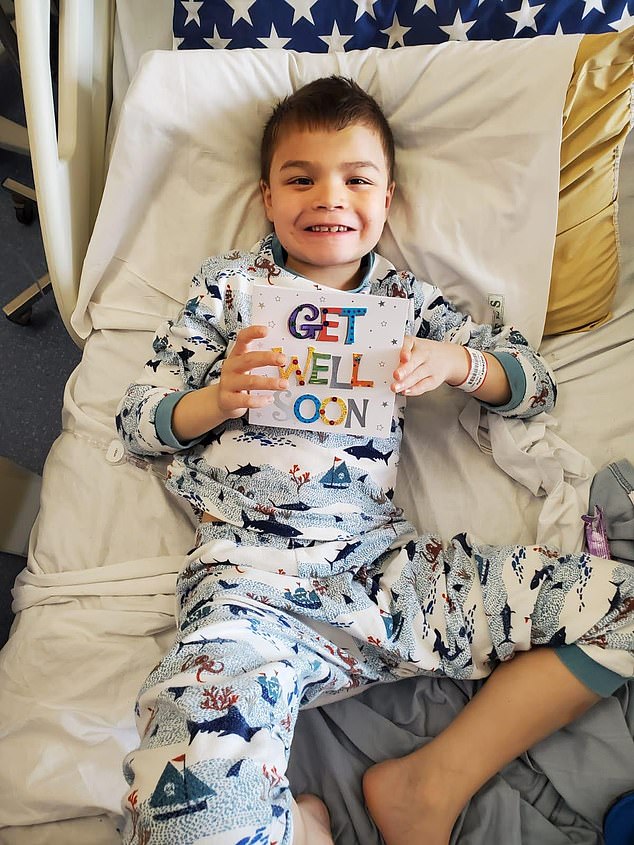 He added: ‘It’s such a cruel thing to watch anyone go through, let alone a child.

‘And that’s why the key message is please get on the database, if you can possibly try. His bone marrow type is so niche that we cannot find a donor.’

Between 100 and 150 people are diagnosed with aplastic anaemia every year in the UK.

The condition, which can be inherited, occurs when the body’s immune system attacks bone marrow cells. Doctor’s don’t know what triggers the response, but believe it could be down to a recent viral infection in some cases.

Alfie first showed symptoms of his illness in 2018, when he began sleeping a lot more and bruised easily. He also suffered frequent nosebleeds.

Doctors in Hong Kong, where the family lived at the time, ran medical tests and gave Alfie drugs and blood transfusions to manage his symptoms.

What is aplastic anaemia?

Aplastic anaemia is a serious, potentially life-threatening condition in which the bone marrow and stem cells do not produce enough blood cells.

The condition causes a drop in levels of red and white blood cells and platelets.

Red blood cells transport oxygen around the body, so a lack of them can starve muscles of oxygen, making people weaker and tired.

White blood cells are crucial for the immune system to function, and platelets are what helps the blood to clot when someone is injured.

Aplastic anaemia usually needs to be treated with a bone marrow transplant to kick-start the body into producing enough blood cells.

The condition can be inherited but can also develop on its own at any time.

In some cases, aplastic anaemia can develop into leukaemia, and it can lead to life-threatening heart failure.

It is a rare disease thought to affect around one in 500,000 people and is more common in children and older people.

But they weren’t sure what was causing them.

The family returned to the UK in January 2020 to try to get to the bottom of his illness and two months later he was rushed to hospital with a severe nosebleed that would not stop.

He was then diagnosed with aplastic anaemia after doctors examined a sample of his bone marrow.

Since then, Alfie has required weekly transfusions, which he gets at the Royal Devon and Exeter Hospital, and takes daily tablets of the steroid hydrocortisone.

Alfie also lives with a Hickman line — a hollow silicone tube that runs through a vein between his heart and skin — so he can receive transfusions easier.

He also has a compromised immune system, which left him hospitalised for over a week earlier this year when he caught a cold.

Additionally, he becomes severely tired and gets little red dots on his skin — which signals internal bleeding because his platelets drop so low — especially in the last two days before he receives a transfusion.

A normal platelet count is between 150 and 400, but Alfie’s has dropped as low as eight which his father said is ‘beyond critical’.

A stem cell transplant involves taking healthy stem cells from the blood or bone marrow of a donor with a similar tissue type and transferring them to another person.

To improve the chances of the treatment being successful, donated stem cells need to carry a special genetic marker – known as a human leukocyte antigen (HLA) – that’s identical or very similar to that of the person receiving the transplant.

The best chance of getting a match is usually from a close family member, but if they are not a match a donor on a bone marrow registry will have to be found.

People aged 16 to 30 can join the Anthony Nolan register, while over-30s can join the DKMS register. They will be sent a testing kit similar to a lateral flow Covid test and involves rubbing a swab against the inside of the cheek.

This is posted back to the registries. Eligible people can donate their bone marrow by being connected to a machine that collects it from their blood.

Alternatively, a needle can be used to take stem cells from the hip bone, which is done under general anaesthetic and may require a hospital stay.

Alfie’s father, mother Lily, 45, twin sisters, 5, are not good matches, but if no one comes forward his mother will donate her bone marrow. 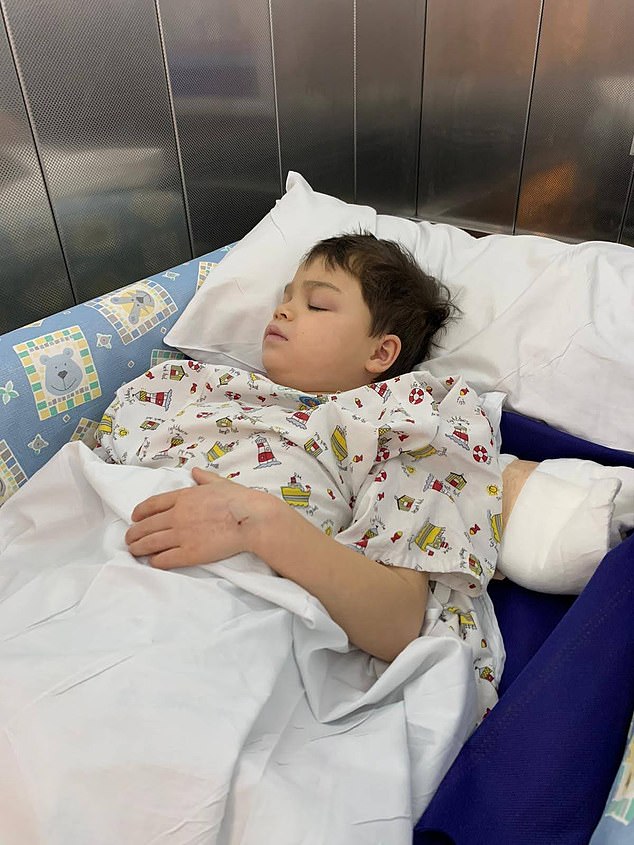 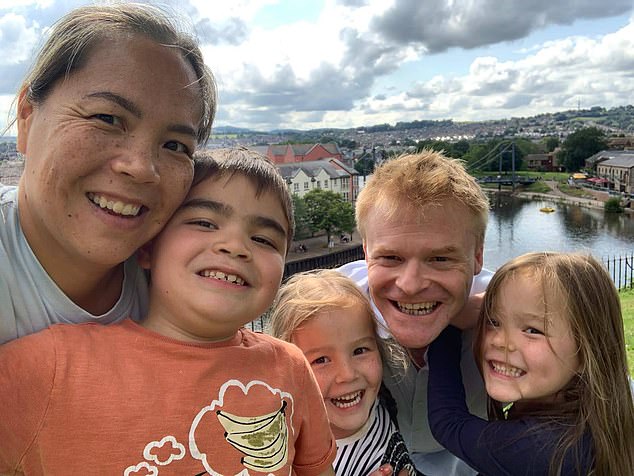 His father Charles, 44, mother Lily, 45, twin sisters, 5, are not good matches for the transplant

Mr Pinckney said his wife is a ‘six out of 10 match’, but ‘anything below 9.5 or 10 out of 10 match will likely not work and risks Alfie’s body rejecting the transplant’.

His father said: ‘That’s why we’re asking people to come forward to be that person. For Alfie or any other child.

‘At the moment his bone marrow is dead. It’s not doing anything. Once he undergoes a successful transplant, the bone marrow will start to grow and become normal, meaning he will produce platelets.

‘He wouldn’t have to go to hospital. He could have his Hickman line out.

‘He could actually become a normal boy if you like and do normal things he could play rugby football. We could take him skiing, do all these things at the moment.

‘All the time basically sits on the sidelines, which is crippling to watch and just to be told that you can’t go swimming. He can’t go climbing.’

At one stage his medication made him sensitive to sunlight, so he could no play outdoors, Mr Pinckney said.

‘After the treatment he would return to normality. He wouldn’t have to take drugs and miss at least a bit of school every week.

Up to 70% of GPs in parts of England qualified OUTSIDE of Britain, NHS figures show