Covid has slashed life expectancy in four-fifths of industrialised nations and erased a decade of progress in extending Britons’ lifespans, according to a major report which lays bare the pandemic’s impact on global health.

The Organization for Economic Cooperation and Development (OECD) said Covid ‘contributed, directly and indirectly’ to a 16 per cent rise in average deaths among its 38 member countries.

Overall life expectancy has taken a hit in 24 out of the 30 nations (80 per cent) for which there was reliable data in the year-and-a-half of the pandemic so far, the report found.

It fell the most in the US, with Americans losing 1.6 years of life per capita, followed by Spain where it fell one-and-a-half years, Lithuania and Poland (both 1.3 years), as well as in Belgium and Italy (1.2).

In the UK, life expectancy dropped by a whole year during the pandemic, with Britons now living to an average age of 80.4 — the lowest figure since 2010.

The findings put the UK and the US in the bottom 10 countries for overall life expectancy, despite being among the richest in the OECD. The only nations which did not take a hit to life expectancy were Norway, Denmark, Finland and Latvia, as well as Japan and Costa Rica.

In terms of confirmed Covid deaths, the US and UK had the 10th and 11th highest tolls, respectively, both recording around 2,000 deaths per million people.

The vast majority of countries have seen their average life expectancy plunge due to the Covid pandemic. The UK falls just below the OECD average to 80.4 years 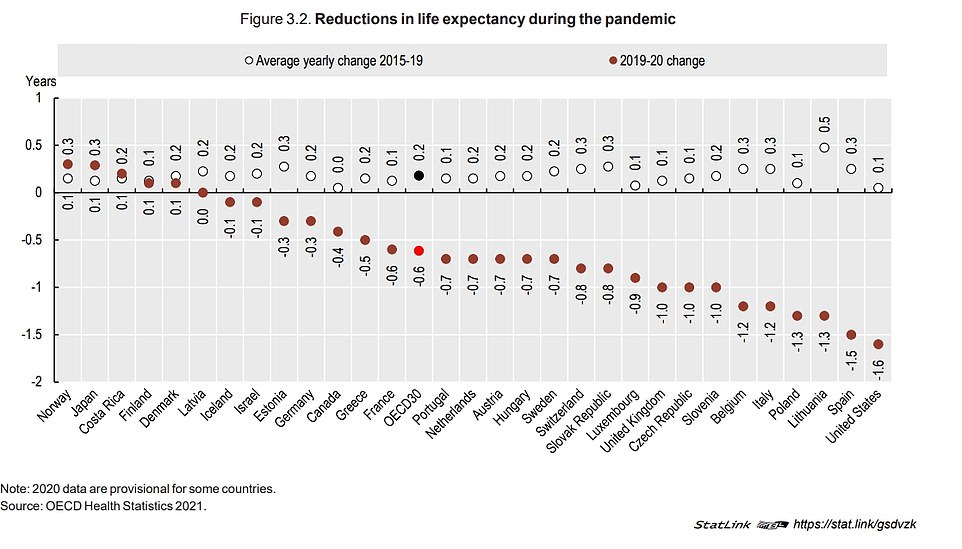 Life expectancy took a hit in 80 per cent of the OECD nations. The US was the biggest loser, shedding 1.6 years of per capita, followed by Spain where it fell one-and-a-half years, Lithuania and Poland (both 1.3years), as well as in Belgium and Italy (1.2) 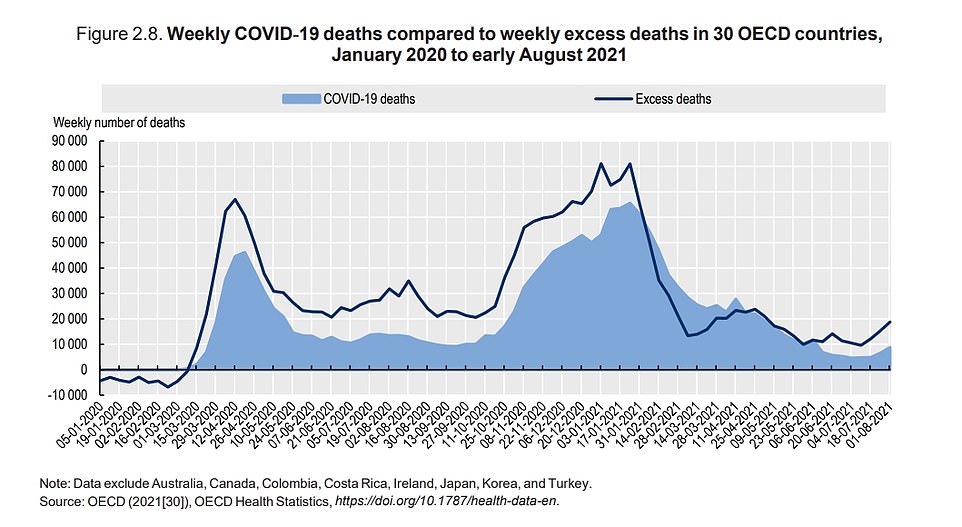 This graph shows the number of confirmed Covid deaths in ,most of the OECD nations and the number of excess deaths recorded at the same time. Due to differences in reporting and availability of diagnostic tools to detect the virus scientists have also used excess deaths as indicator of potential Covid fatalities

But when looking at excess mortality during the pandemic, the UK falls below the OECD average, which the report suggests could be due to the sheer volume of testing done in Britain.

Statisticians say excess mortality is the most accurate way to measure the toll of the pandemic on health because it accounts for testing disparities between countries and includes knock-on fatalities.

Like the UK other OECD nations experienced a drop in face-to-face GP consultations during the pandemic, falling by 66 per cent in Portugal, 40 per cent in Australia, 18 per cent in Austria and 7 per cent in Norway in May 2020, compared with the same month the year prior 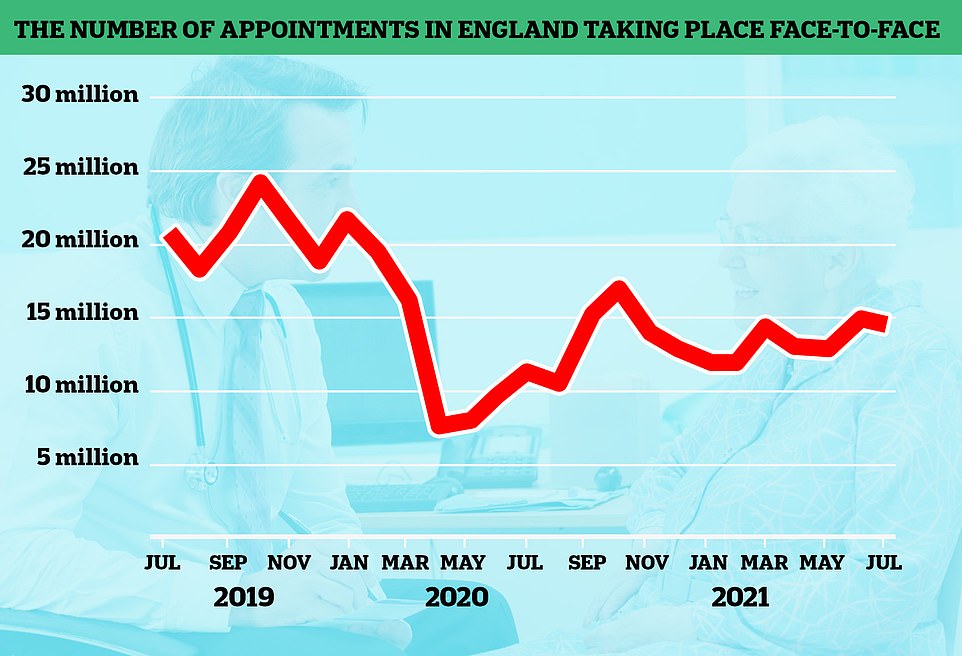 In the UK the number of GP appointments taking place face-to-face dropped dramatically at the beginning of the pandemic, as virtual appointments were encouraged in an attempt to keep social mixing low and hospitals virus-free. In-person appointments began to increase last summer, before dropping again during the second wave. Despite being on the rise, the figures are still much lower than pre-pandemic levels 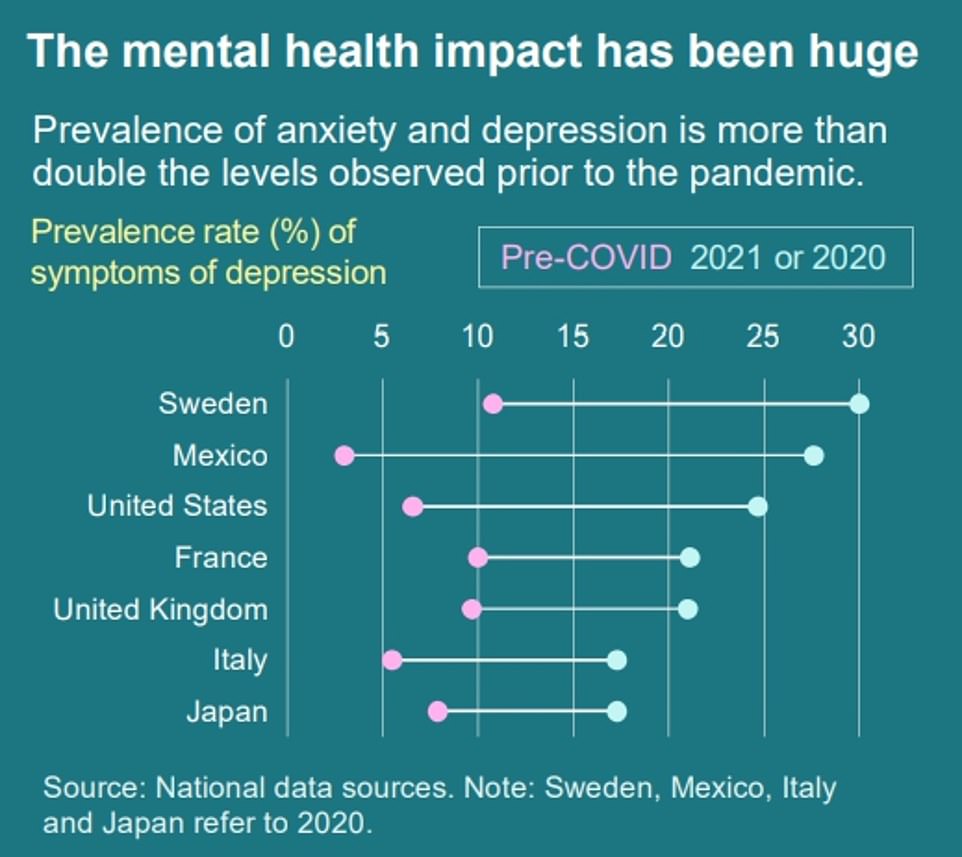 Anxiety and depression has doubled in some countries over the course of the pandemic. Mental health, and the impact of loneliness and isolation, was one of the key concerns during national lockdowns 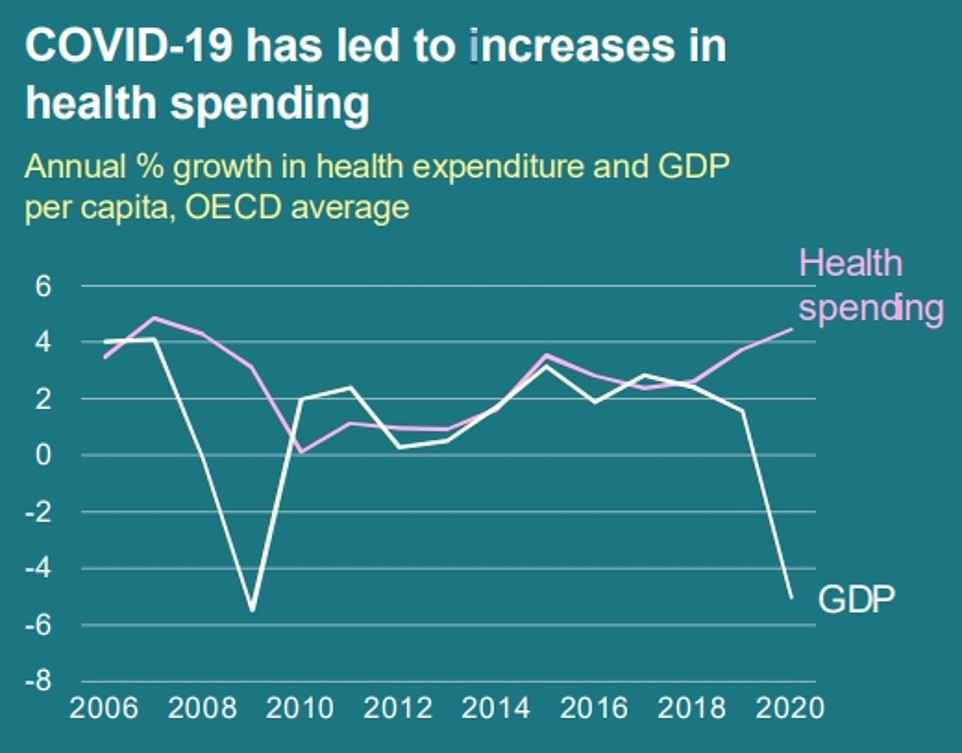 Even when looking at excess mortality, however, the US ranks fifth worst behind only Mexico, Poland, the Czech Republic and Slovakia.

Meanwhile, the report also revealed the knock-on effect of the pandemic on wider healthcare, with people waiting up to 88 days on average across the OECD for elective surgeries compared to pre-Covid.

Face-to-face primary care appointments — including GP consultations — have fallen globally by up to 30 per cent in the worst hit countries Spain and Chile.

Emergency attendances to hospital dropped by a fifth in the UK in 2020 compared to the previous year, the report found, and separate UK data show face-to-face GP appointments are still 20 per cent lower than pre-pandemic.

Mental health has also taken a toll, with depression rates doubling in the UK and US, as well as France and Belgium on the back of numerous lockdowns.

The UK was found to have the second lowest number of doctors and hospital beds in Europe per population size, with just three doctors and two-and-a-half beds per 1,000 people. Only Poland had fewer doctors and Sweden less beds.

Yet health spending in Britain as a share of national income was the highest on the continent, rising from 10.2 per cent to 12.8 per cent during the pandemic.

How Sweden’s lockdown gamble paid off

Sweden has suffered fewer Covid deaths than most of Europe and is still recording lower infection rates, according to figures that suggest its lockdown gamble has paid off.

The Scandinavian nation became an international outlier last year when it defied scientific advice and refused to follow the rest of the world in shutting down society to curb the virus’ spread.

Not only has Sweden’s economy bounced back faster than any other country in the EU, latest data shows that it has also fared better than most in terms of lives lost during the pandemic.

Sweden has suffered almost 1,500 confirmed Covid deaths per million people, according to Oxford University-based research platform Our World in Data, which is lower than the European average (1,800).

The UK — which has endured three national lockdowns and several regional fire-breakers — has recorded 2,100 per million, for comparison, while Belgium and Italy both have rates above 2,000.

When looking at excess mortality during the pandemic, Sweden ranks just 21st out of 31 European countries with 5 per cent more deaths since March last year than would be expected. Britain, Italy and Spain, on the other hand, have each suffered around 10 per cent more deaths than average during Covid.

Statisticians say excess mortality is the most accurate way to measure the toll of the pandemic on health because it accounts for testing disparities between countries and includes knock-on fatalities.

The plaster that can spot if you’re a snorer