Fears about climate change are behind the drop off in British fertility rates, experts believe.

Researchers tracking births in Western nations say adults are no longer as willing to bring babies into the world because of the apocalyptic global warming warnings.

Dr Britt Wray, a human and planetary health fellow at Stanford University, described it as a ‘fear of a degraded future due to climate change’.

She told MailOnline she thought it was ‘playing a roll in declining birth rates in many countries around the world’.

Data from the Office for National Statistics (ONS) yesterday showed the total fertility rate fell to just 1.58 children per woman in 2020 — the lowest since records began in 1938.

Meanwhile, the ONS claimed the fertility rate has been decreasing for a number of other reasons, including improved access to contraception, women delaying motherhood and women having fewer babies.

But Dr Wray and other academics believe climate change is also to blame.

She was one of the authors behind a study which revealed four in ten young people fear bringing children into the world because of climate concerns.

Nearly six in 10 people were very or extremely worried about climate change. More than eight in ten said they were at least moderately worried.

Data from the Office for National Statistics (ONS) shows the total fertility rate fell to 1.58 children per woman in 2020 – the lowest since records began in 1938 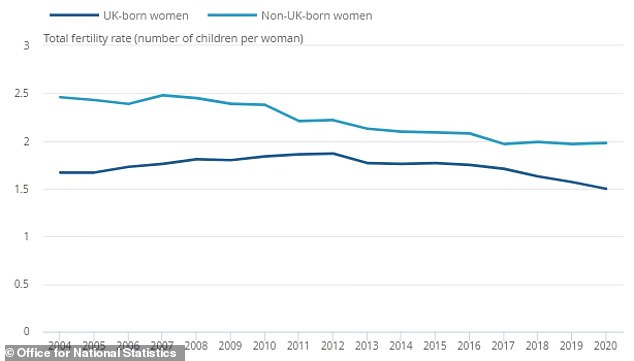 The graph shows the estimated total fertility rate – how many babies each women has on average – from 2004 to 2020. The gap between babies born to to UK (dark blue line) and non-UK born women (light blue line) widened for the third year in a row. The fertility rate among women born in the UK dropped to 1.58, while it increased to 1.98 among those born elsewhere

She said: ‘Recent research on the psychological impacts of climate change suggests that people’s anxieties about global warming may be part of the story.

‘Last year a survey of 2,000 Americans found 78 per cent of Gen Zers aren’t planning — or don’t want — to have kids due to climate change. 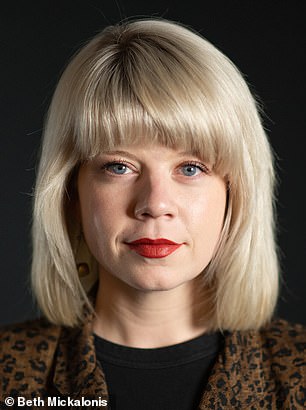 Dr Britt Wray (pictured), a human and planetary health fellow at Stanford University, said Britain’s fall in fertility is likely to be caused by worries over the future that will be left for children

‘A more in-depth social scientific survey, also from last year, sought to understand the “eco-reproductive concerns” of 607 Americans who care about the climate.

‘They found that 96.5 per cent of respondents were “very” or “extremely concerned” about the well-being of their children or hypothetical children, feelings that contributed to decisions to limit the number of children they have, or not reproduce at all.

‘Considering the trajectory science tells us we are on, people’s climate concerns and their connection to reproductive decisions are understandable.’

The research was agreed with by analysts at investment bank Morgan Stanley, who in July told investors climate change was the main driver behind declining birth rates, affecting fertility ‘quicker than any preceding trend’.

They said: ‘Movement to not have children owing to fears over climate change is growing and impacting fertility rates quicker than any preceding trend in the field of fertility decline.’

It is the fifth year in a row that the number of babies born has fallen and is the lowest since 2002.

Last year saw 29.3 per cent of live births were among women who were born outside the UK.

This is the highest since records began in 1969 and is part of a general long-term increase, the ONS said.

The total fertility rate among foreign-born mothers increased slightly to 1.98, at a time when the rate for UK-born women decreased to 1.50.

There were 2,371 stillbirths in England and Wales last year, which amounts to 3.8 per 1,000 births, the figures show.

– It is ‘unequivocal’ that human activity has warmed the atmosphere, ocean and land – with widespread and rapid changes across the world.

– Many of the changes are unprecedented over many centuries to many thousands of years, with the world warming at a rate unprecedented in at least 2,000 years.

– Global average temperatures were nearly 1.1C higher in the last decade than in pre-industrial times, or the period 1850-1900, driven by emissions caused by human activities such as burning fossil fuels and deforestation.

– Human-caused climate change is already affecting many weather and climate extremes in every region around the world, with stronger evidence of more frequent or intense heatwaves, heavy rain, droughts and tropical cyclones and the role humans play in driving the changes.

– Humans are very likely the main driver of the global retreat of glaciers, decline in sea ice, warming oceans and rising sea levels. The rate of sea level rise is speeding up.

– Global surface temperatures will continue to increase until at least mid-century, and the world will reach or exceed 1.5C of warming over the next 20 years.

– Global warming of 1.5C and 2C – limits countries have committed to in order to avoid the most dangerous impacts of climate change – will be exceeded in the 21st century unless deep reductions in carbon dioxide and other greenhouse gas emissions occur in the coming decades.

– Continued warming will drive increases in the frequency and intensity of hot extremes, marine heatwaves, heavy rain, droughts in some regions, the proportion of intense tropical cyclones, and reductions in Arctic sea ice, snow cover and permafrost.

– Every additional increment of warming causes larger changes in extremes, with every extra 0.5C temperature rises leading to clear increases in the intensity of heatwaves, heavy rain that can cause flooding, and droughts.

– Under scenarios for the future with increasing carbon dioxide emissions, the ocean and land carbon sinks such as forests are projected to be less effective at slowing the accumulation of the greenhouse gas in the atmosphere.

– Changes to oceans, sea levels and melting permafrost and glaciers are irreversible for decades, centuries or even millennia as a result of past and future warming.

– Strong, rapid and sustained reductions in emissions of methane would help curb warming, and would also improve air quality

Which microwave meal has the most health appeal?