Many of us reach for a bar of chocolate when we’re feeling down, but according to a new study, a few squares of dark chocolate really can lift our mood.

Thirty grams is about a third of a 100g rectangle of posh dark chocolate that you may find in supermarkets.

It’s thought improvements in mood were linked with microbial changes in the gut from eating the chocolate, fecal samples suggested.

However, the benefits were found only from eating chocolate containing 85 per cent cocoa – not popular milk chocolate treats from the likes of Cadbury and Nestlé, which should be eaten in moderation.

Chocolate products with a high cocoa percentage tend to be better for you because they contain less sugar, fat and other additives such as colourings and palm oil. 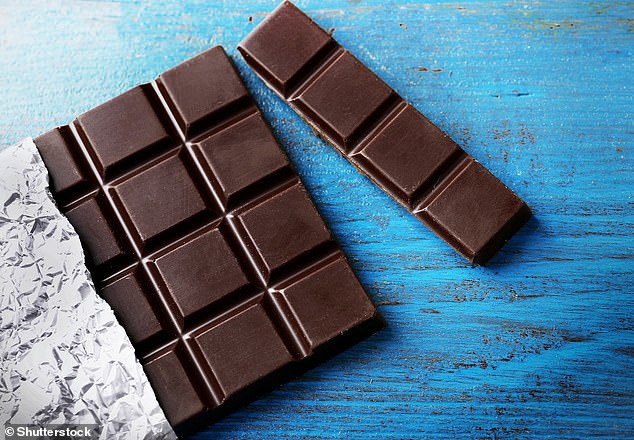 Researchers in Korea investigated the effects of dark chocolate intake on mood in everyday life. They found 85 per cent

WHAT IS 85 PER CENT DARK CHOCOLATE?

85 per cent dark chocolate means 85 per cent of the product is made up of matter from the cocoa plant.

The remaining 15 per cent tends to consist of sugar, vanilla and other extracts.

It tends to have a strong aroma and full-bodied cocoa taste.

Milk chocolate is made up of cocoa beans, cocoa butter, sugar and milk powder.

By law in the US, a milk chocolate bar only needs to contain 10 per cent cocoa; in the EU this number is 20 per cent.

Cocoa, used in the production of chocolate, is rich in fibre, iron and ‘phytochemicals’ – powerful chemical compounds found in plants that are known to support the immune system and reduce risk of diseases like cancer, dementia, arthritis, heart disease and stroke.

The new study was conducted by researchers at the Department of Food and Nutrition, College of Human Ecology, Seoul National University.

Until now, little has been known about the emotional effects of daily dark chocolate intake, they claim.

‘Dark chocolate has long been recognised for its mood-altering properties,’ they say in their research paper.

‘However, the evidence regarding the emotional effects of daily dark chocolate intake is limited.

‘To the best of our knowledge, this is the first study that provides evidence that dark chocolate consumption in everyday life influences physiological and psychological states.’ 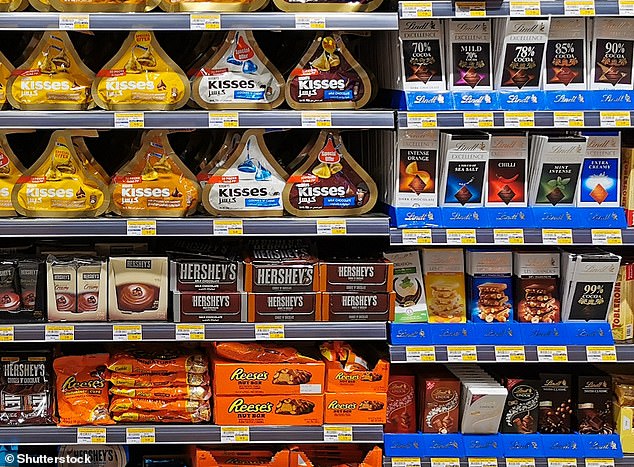 In the study, mood benefits were found from only eating chocolate containing 85 per cent cocoa – not popular milk chocolate treats. Note the distinction between chocolate products made up of a high percentage of cocoa (as seen here towards the top right) and those made up of sugar, fat and additives such as palm oil, cornstarch and colourings

Participants were asked to rate their feelings on a scale of one (very slightly or not at all) to five (extremely) for each adjective.

To assess the association between the mood-altering effects of dark chocolate and the gut microbiota, participants’ faeces were analysed too.

The study found that consumption of dark chocolate significantly reduced negative mood states in the 85 per cent cocoa group, but not in the 70 per cent group.

Fecal samples showed gut microbial diversity was significantly higher in the 85 per cent cocoa group than the control group. 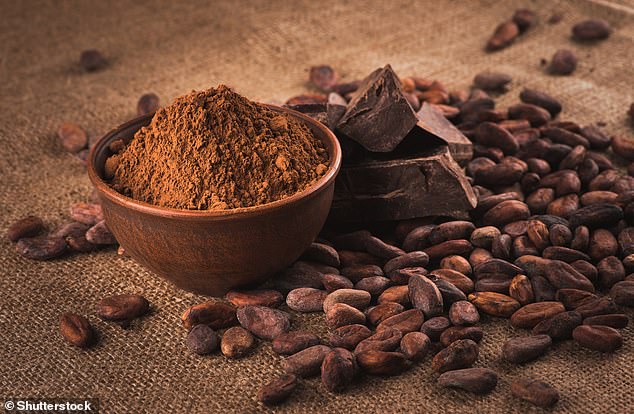 Cocoa, used in the production of chocolate, is rich in fibre, iron and ‘phytochemicals’. Milk chocolate products tend to contain less cocoa

The 85 per cent group had higher levels of Blautia, a type of gut bacteria, which was significantly associated with positive changes in mood scores.

It’s possible that the mood-altering effect of 85 per cent dark chocolate consumption may be ‘mediated by changes in the diversity and abundance of intestinal bacteria’, the researchers point out.

Previous research has shown that the microbiota of healthy controls have more Blautia compared to patients with psychiatric disorders such as schizophrenia.

The study has been published in Journal of Nutritional Biochemistry.

A SWEET DEAL! MILK CHOCOLATE COULD BE MADE WITH THE HEALTH BENEFITS OF DARK CHOCOLATE 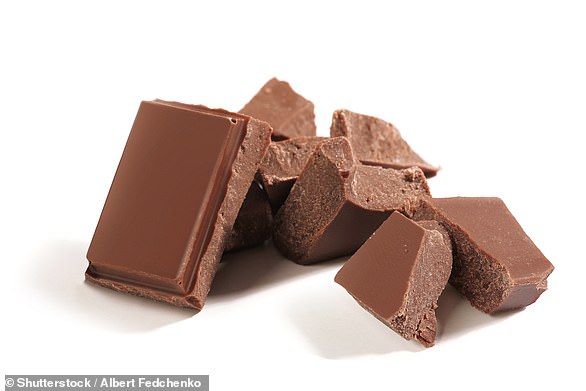 For years we’ve been told dark chocolate is better for us. But scientists have good news – they’ve found a way of making milk chocolate healthier (File photo)

For years we’ve been told dark chocolate is better for us. But scientists have found a way of making milk chocolate healthier.

Dark chocolate, which usually has a more bitter taste, contains phenolic compounds which can act as an antioxidant.

It has anti-inflammatory properties and can lower the risk of cardiovascular disease.

In 2020, researchers working for the US government have found how to incorporate these benefits in milk chocolate by adding peanut skin extract – usually leftover when peanut butter and sweets are made.

This raises the antioxidant levels while maintaining the chocolate’s sweet flavour and creamy texture.

The team from the US Agricultural Research Service ground up the skins into powder, extracted the phenolic compounds and then combined it with a food additive.

Adding the peanut skins to milk chocolate could give the same wellbeing boost at a fraction of the cost of dark chocolate, which is more expensive than milk varieties due to its higher cocoa content.

Lisa Dean, the project’s lead investigator, said: ‘Dark chocolate is thought to be healthier as it contains high levels of compounds called polyphenols.

‘These compounds are also responsible for the bitter flavor.

‘Dark chocolate is also lower in cocoa fat and sugar than milk chocolate.

‘Most people prefer milk chocolate because it is sweeter, not bitter. It also melts in the mouth easier and has more pleasing ‘mouthfeel’.

‘Dark chocolate has a hard texture and melts at a higher temperature.

‘This product has the potential of providing consumers with the same level of polyphenols as dark chocolate but without the less desirable characteristics.

‘Peanuts skins are very inexpensive as there are usually just pelleted for animal feed or dumped in landfills.

‘There are some patents already in place for using nuts skins, including peanut skins as a food ingredient which are owned by Mars, Inc.

‘If some processor wanted to scale up the process and use the ingredient it could one day appear in retail stores.’

In fact, many of the taste testers preferred the milk chocolate with the peanut extract added.