House prices have risen across the country for the first time in 18 months amid a surge in confidence among buyers and sellers following the Tory election triumph.

There has been ‘a noticeable pick-up’ in the housing market since Boris Johnson defeated Labour’s Jeremy Corbyn in December, the Royal Institution of Chartered Surveyors said.

But estate agents have said the bounce is driven by buyers chasing a shortage of homes for sale and urged those who want to move home to get their properties on the market at realistic prices now, to capitalise on renewed optimism while it lasts. 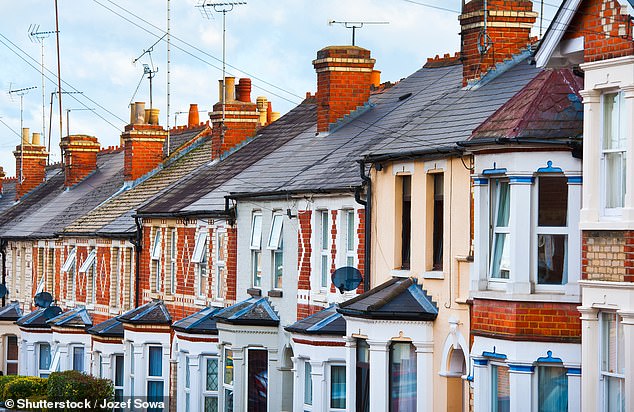 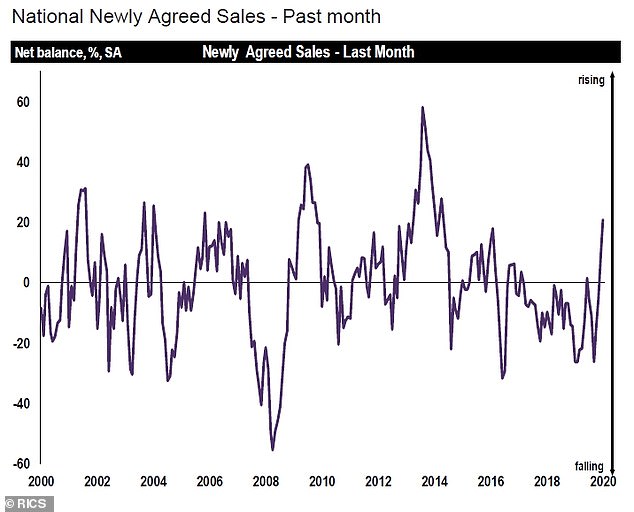 Newly-agreed sales have risen – above the 0% balance line – having been in the doldrums for some time, Rics chart shows. Agents put this down to buyers acting after the election, but say the bounce is being driven by a low level of homes for sale

Jeremy Leaf, north London estate agent and a former Rics residential chairman, said: ’There is more activity but we are not yet seeing enough realistically-priced instructions to satisfy demand in most price ranges as stock levels overall remain low.

‘We probably won’t know until the end of February/beginning of March whether this renewed interest can translate into robust sales giving us more confidence that this housing market recovery is robust and sustainable.’

Inquiries from buyers, agreed sales and new instructions from sellers all picked up over January, according to Rics, although this is coming from low levels at the end of last year.

The industry insiders said they were seeing house prices climb across the UK for the first time since July 2018.

However, expectations for house price rises this year remain modest and agents are urging sellers not to be overambitious if they want to move.

It remains to be seen how long this newfound market momentum is sustained for
Simon Rubinsohn, Rics

Simon Rubinsohn, chief economist at Rics, said: ‘The latest survey results point to a continued improvement in market sentiment over the month, building on a noticeable pick-up in the immediate aftermath of the General Election.

‘The rise in new sales instructions coming onto the market is a noteworthy and much needed development, given the lack of fresh listings over the past few years had pushed stock levels to record lows.

‘It remains to be seen how long this newfound market momentum is sustained for, and political uncertainty may resurface towards the end of the year.’ 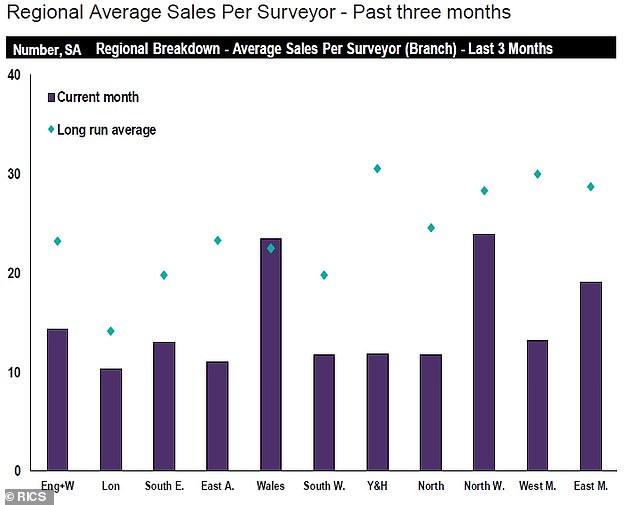 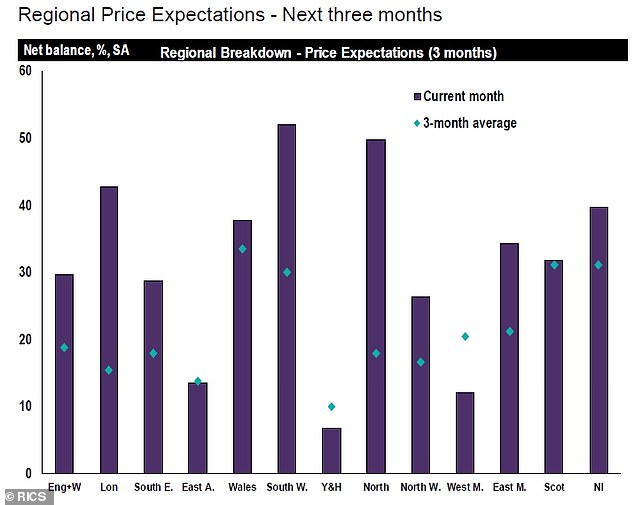 Rics estate agents broadly expect prices to rise over the next three months but some are more confident than others, with expectations lower in East Anglia, Yorkshire & Humber and the West Midlands

Rics estate agents said they expect house prices to rise over the next three months and the year ahead.

Across Britain 19 per cent more surveyors were seeing a rise rather than a fall in the number of homes being listed for sale in January – up 8 per cent on December.

The number of people looking to buy also climbed and agreed sales edged up for the second month in a row. 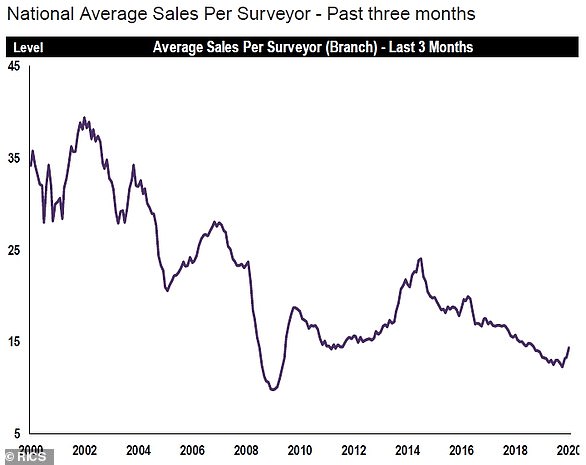 Property market has picked up after sinking to levels not seen since the financial crisis, this chart of average sales per estate agent shows

Estate agents’ reports on local markets in the survey were mixed, with the overriding message being that there was a shortage of homes for sale compared to the number of prospective buyers.

However, agents have also cautioned as evidence of a bounce has emerged that sellers need to be realistic and not expect much big gains, as sentiment remains fragile and buyers are constrained by already high prices.

David Knights, of David Brown & Co, in Ipswich said: ‘Early New Year bounce, on the back of increased optimism, faded in the last two weeks. Not as many new instructions as expected. Good level of interest in the lower price ranges.’

Early New Year bounce, on the back of increased optimism, faded in the last two weeks

Meanwhile, John Andrews of Doolittle and Dalley, in Stourport, said: ‘Generally more interest across all price ranges, although shortage of properties coming onto the market is frustrating and it is hoped it will improve as spring approaches.’

Ben Hudson, of Hudson Moody, in York, said: ‘Increase in buyer confidence as Brexit and election are behind us, but a lack of instructions.’

Lucy Pendleton, of London estate agent James Pendleton, said: ‘Sellers are coming to market in much greater numbers because they are reassured that a stronger stream of buyers will ensure they get the right price.

‘Buyers are ploughing into negotiations with a degree of confidence that’s been sorely lacking over the past few years. If this continues it will be the residential market’s busiest first quarter this century.’ 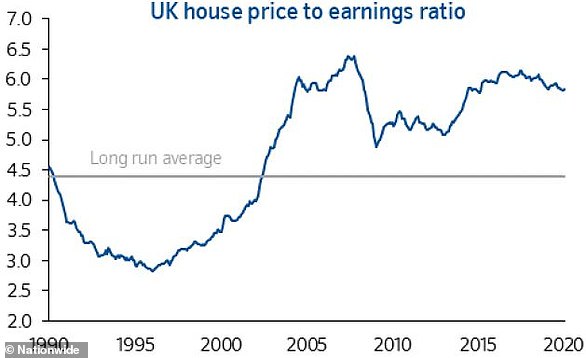 The most recent major house price index reports have shown a modest pick-up in the property market that pre-dated the election. 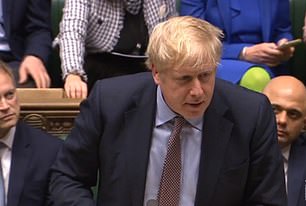 Nationwide said house prices climbed 0.5 per cent in January – adding £615 to the cost of the average home.

In the year to January, average property prices rose by 1.9 per cent, marking a 14-month high for house price inflation.

Buyers can now expect to fork out around £215,897 for a home, but Nationwide poured cold water on talk of a sizeable Boris bounce for the housing market and forecast a ‘broadly flat’ year ahead for property values.

Average house price inflationacross the UK has tailed off in recent years. This chart shows the price of the average home on Nationwide’s index

Halifax reported house price inflation of 4 per cent in the year to January, but its figures have consistently outstripped rivals and be questioned by analysts over the past year.

The ONS / Land Registry report, which uses sold prices data and lags rival reports, said that house prices were up 2.2 per cent in the year to November.

Separate data from the Office for National Statistics showed that the number of new houses which builders started to construct last year hit its highest level since before the financial crisis in 2007-2008. A total of 202,440 new homes were started – up from 196,890 in the previous 12 months. 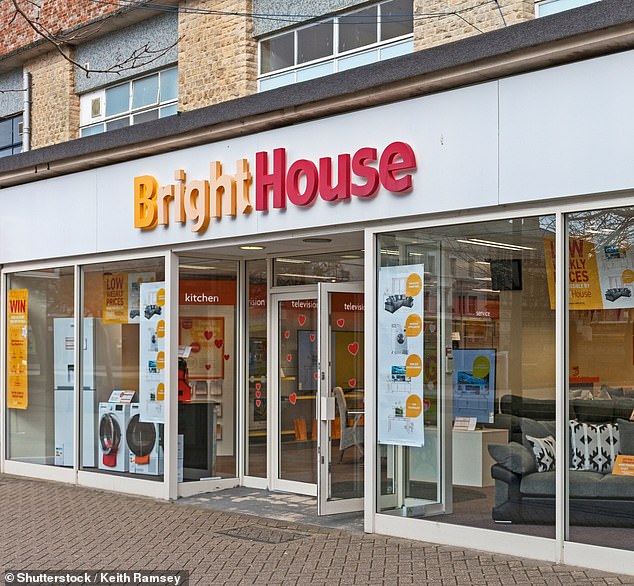 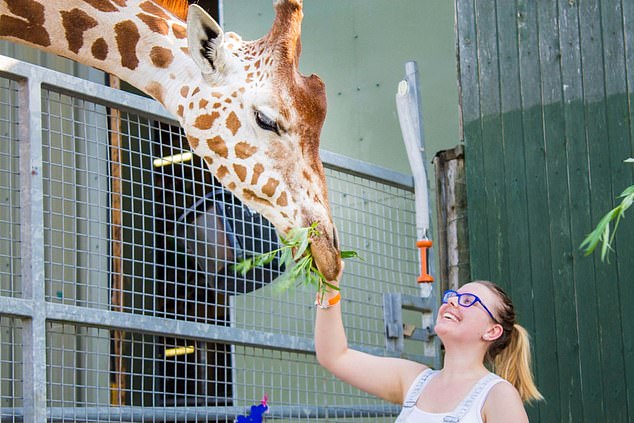 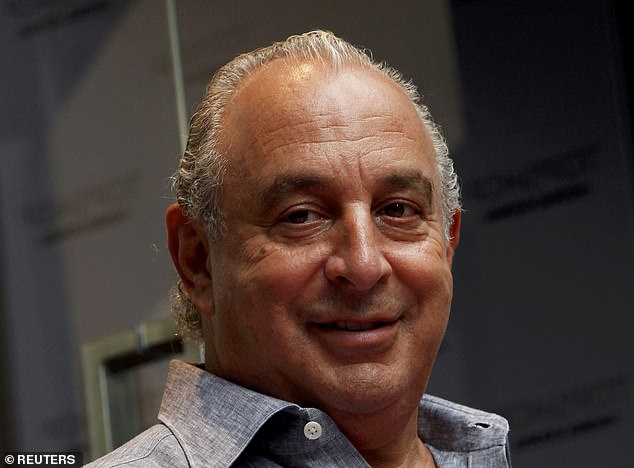