WHO says vaccine passports should NOT be used for foreign travel

Covid Germany: Merkel warns of third wave of infections that could trigger ANOTHER lockdown

CRAIG BROWN: When it comes to mice, Beatrix knows best!

What will replace GCSEs and A-levels and will the system be fair?

Thousands across the country are braced for more flooding in the wake of Storm Christoph as the Met Office warned of ice danger and said the UK is set ‘to get more wintry’ with -10C over the weekend.

Care home residents were among those evacuated after floods in several areas across the North West and Wales following days of heavy rain.

A Met Office forecaster has said, however, that it is going to be ‘more wintry now’ as the storm moves away to the east.

Meteorologist Craig Snell added: ‘We’re losing the rain but gaining some colder and possibly some wintry weather too.’ A yellow weather warning for ice is in place along a large part of western coasts until 10am on Friday.

The alert – which stretches from the Scottish Highlands, down to the north west of England and into Wales, as well as covering Northern Ireland – says there is the possibility of injuries from icy conditions on ground which is already wet.

An additional yellow warning for snow and ice is in place across northern parts of Scotland until Friday lunchtime. 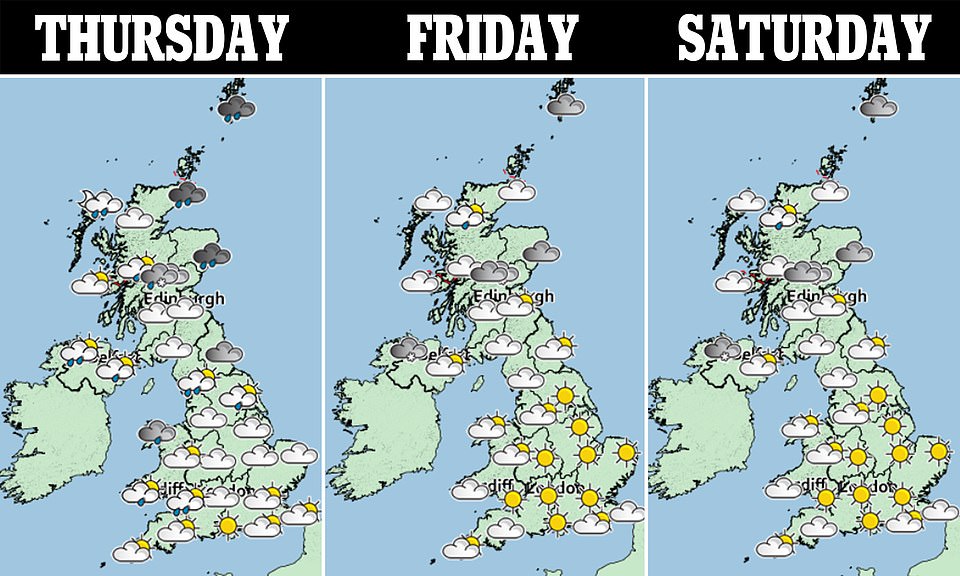 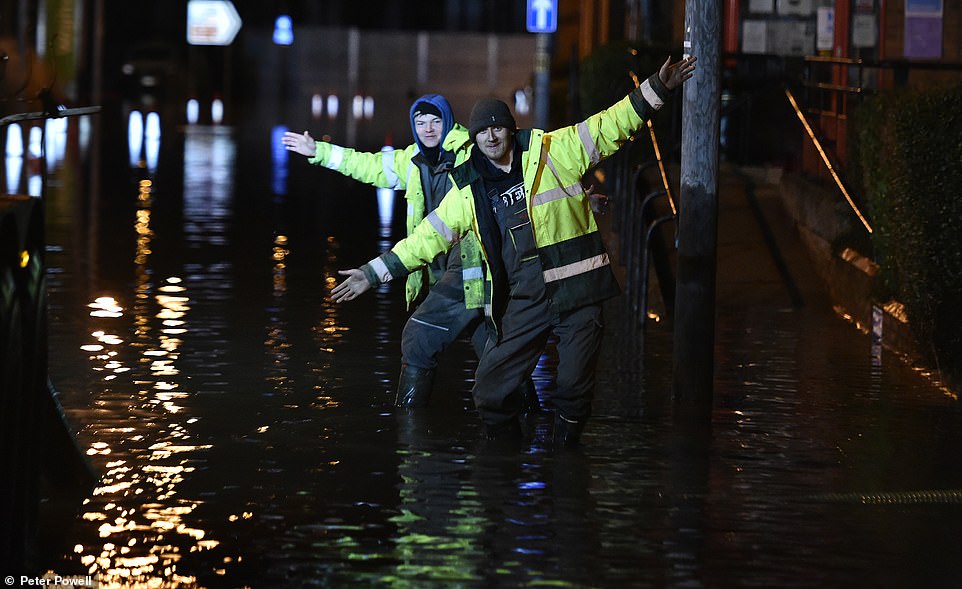 Two council workers smile for a photograph as they stand in flood water before working to clear it in Northwich, Cheshire 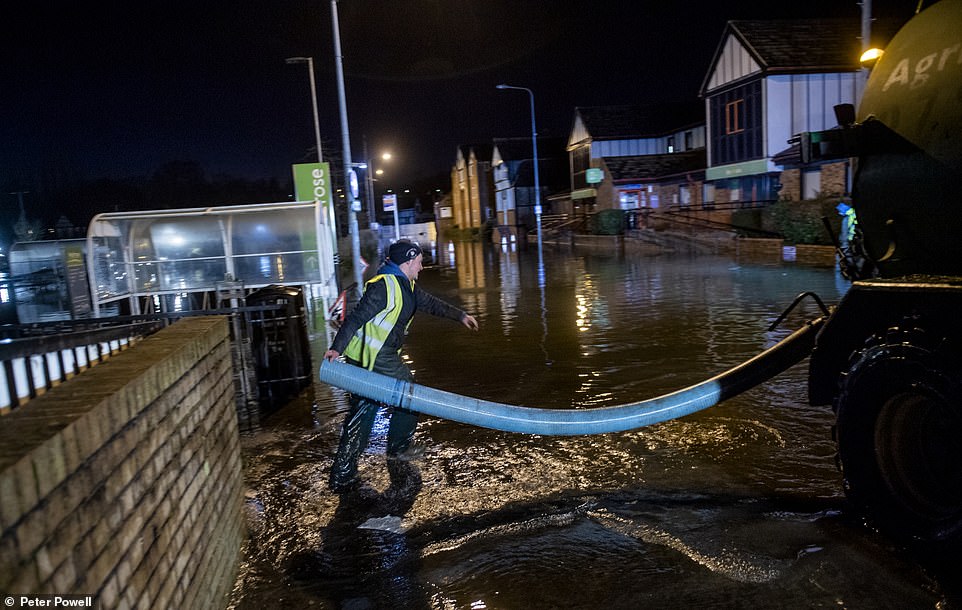 The chilly weather will continue into the weekend, when temperatures could drop to minus 10C overnight in localised parts of Scotland, and could dip as low as minus seven in parts of England, Mr Snell said.

He went on: ‘It will be feeling cold, I think that certainly that will be something that we will all be noticing it will be colder than it was to start the week.’

‘I think the main thing for most of us will be that we will see some frosty nights and with the ground wet from the rain we’ve had we may well see some icy patches,’ he later added.

Dozens of care home residents were among those escorted from their homes as floodwaters rose in Cheshire on Thursday.

Around 40 residents were assisted out of the Weaver Court care home in Northwich, Cheshire, by fire crews with dinghies on Thursday afternoon, as most of the town centre laid under water. 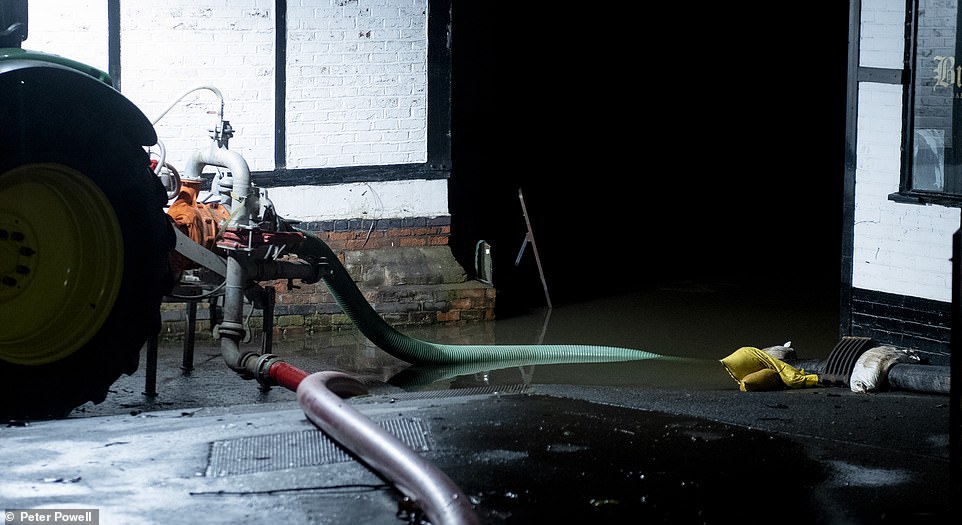 The chilly weather will continue into the weekend, when temperatures could drop to minus 10C overnight in localised parts of Scotland, and could dip as low as minus seven in parts of England, Mr Snell said. Pictured: Northwich today 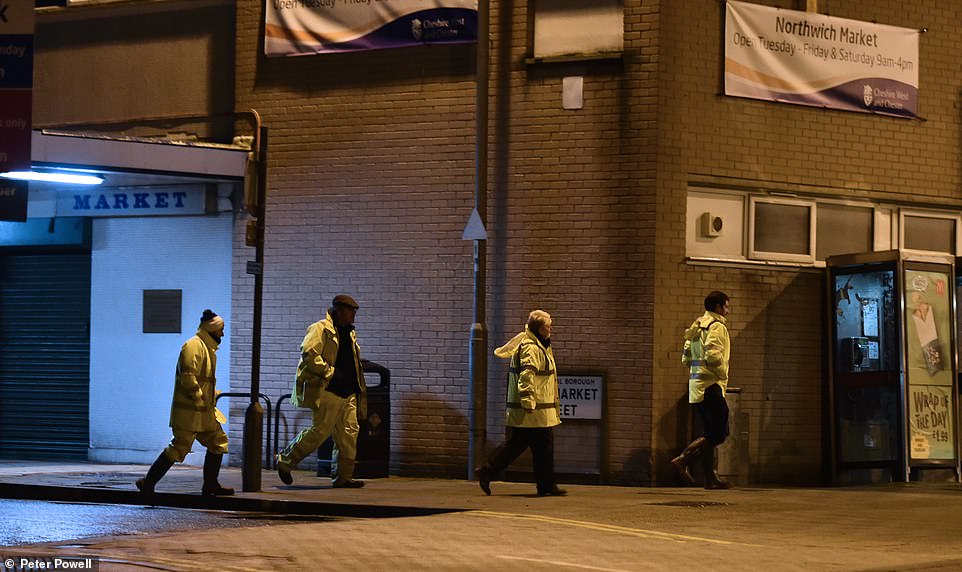 Around 40 residents were assisted out of the Weaver Court care home in Northwich, Cheshire, by fire crews with dinghies on Thursday afternoon, as most of the town centre laid under water. Pictured: The clean up operation there today 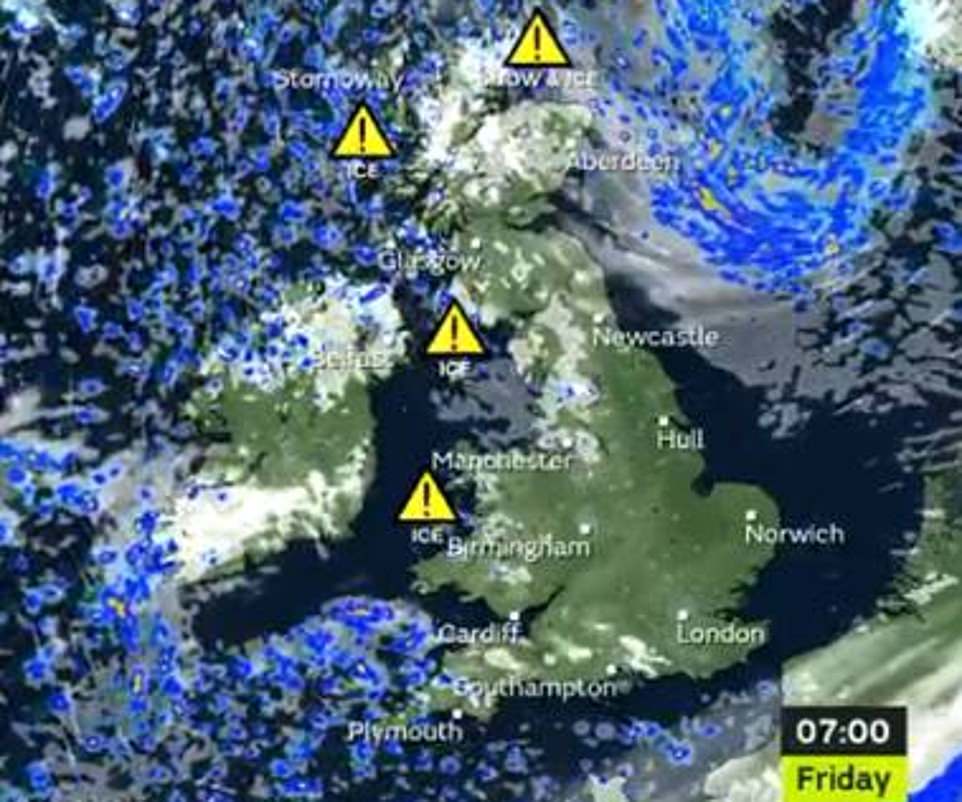 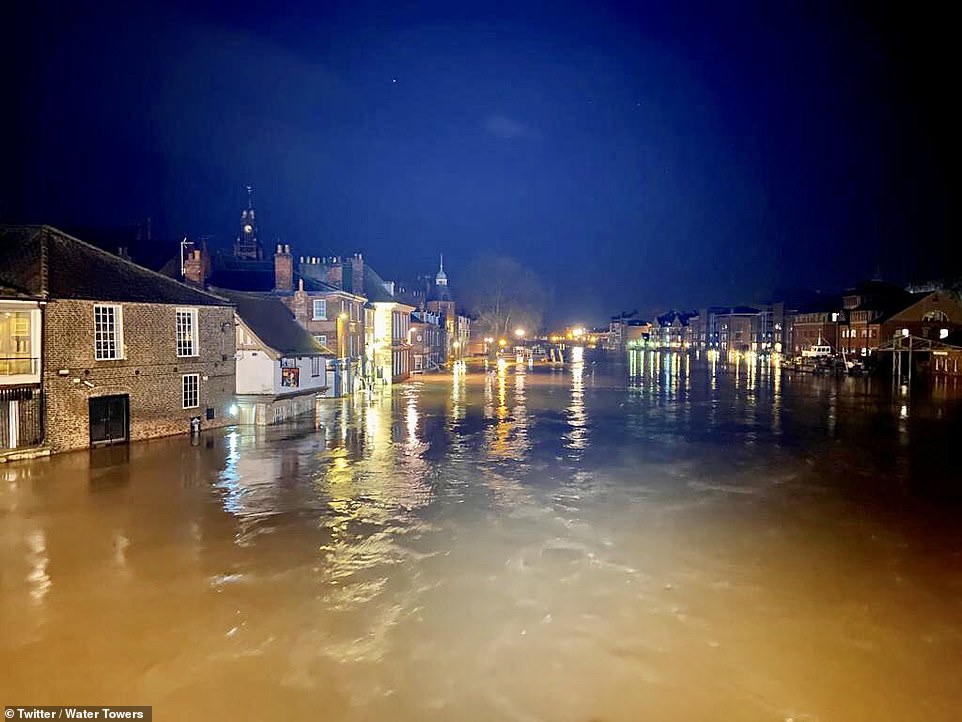 The historic city of York is picture under flood water this morning, with some homes having lights on despite the deluge reaching their doorsteps

Earlier in the day, Cheshire Fire and Rescue had said it was in the process of rescuing 21 people by boat from Lea Court nursing home in the town of Warrington.

Elsewhere, people were also told to leave their homes in the Didsbury and Northenden areas of Greater Manchester, Bangor-on-Dee in North Wales and in the Skewen area of Neath, North Wales.

Meanwhile, South Wales Police said on Twitter that the body of a man had been recovered from the River Taff near Blackweir in Cardiff on Thursday, with the death being treated as unexplained.

Elsewhere in Wales, emergency teams were called out to protect supplies of the Oxford University and AstraZeneca coronavirus vaccine following flooding at Wrexham Industrial Estate.

Three severe flood warnings – signifying a threat to life – remain in place on Friday morning on the River Dee at Farndon, Bangor-on-Dee and the Lower Dee Valley near Llangollen. 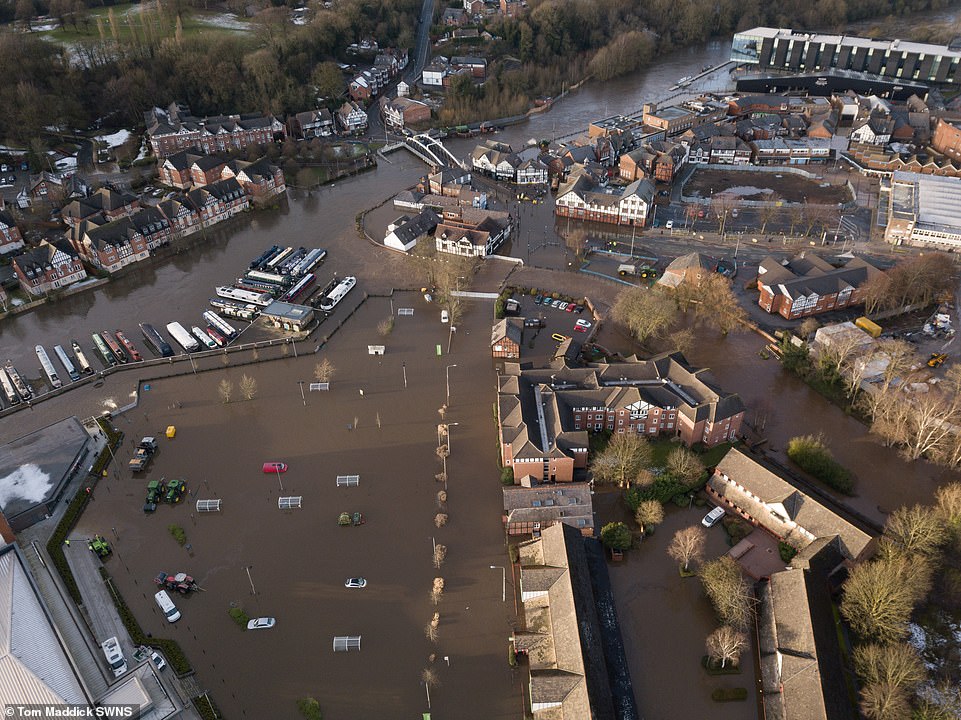 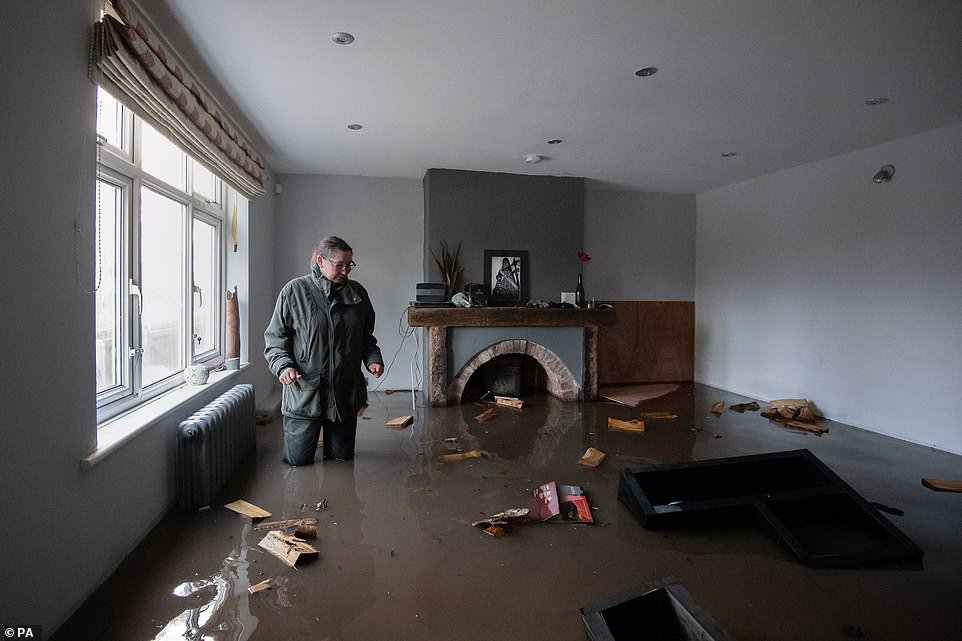 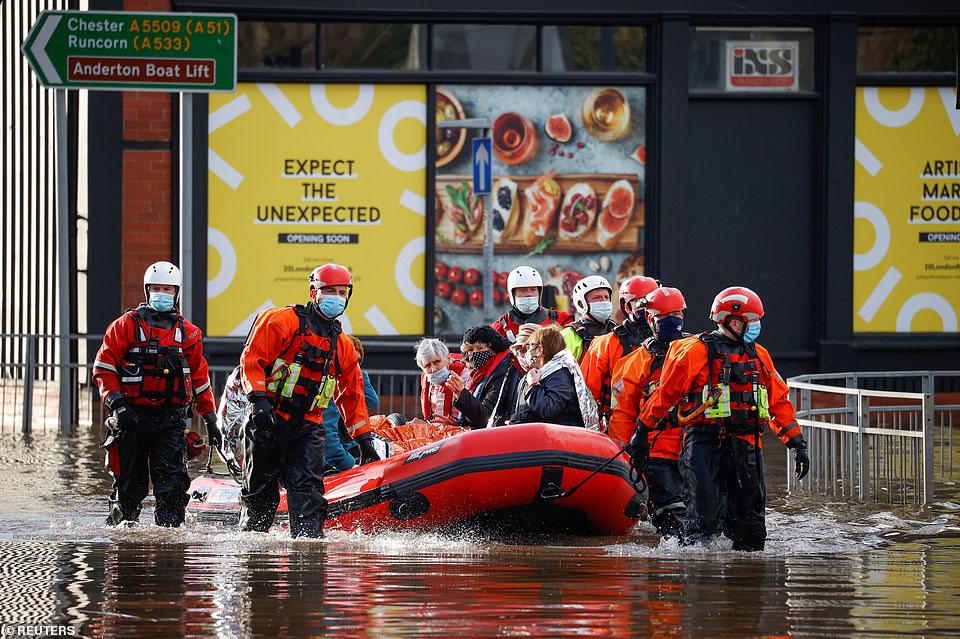 Firefighters evacuate the residents of a care home in Northwich, Cheshire, yesterday after the River Weaver burst its banks 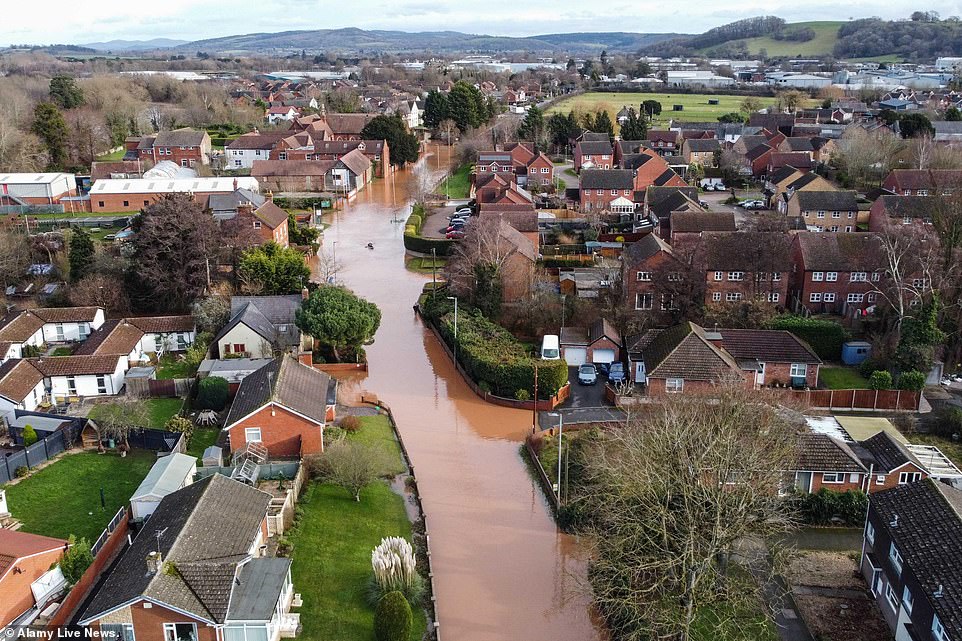 Areas which were hit the hardest by Storm Christoph experienced less rainfall on Thursday, with the highest daily total instead being recorded in Oxfordshire.

Overall, 31mm fell in Bicester between midnight and 8pm, and the second highest total was in Aberdeenshire, where 29mm fell over the same period.

‘Thankfully the areas that saw a lot of the rain on Tuesday and Wednesday have certainly been a bit drier today,’ Mr Snell said.

Environment Secretary George Eustice chaired a Cobra meeting in response to the ongoing flooding on Thursday afternoon, but reiterated ‘the danger has not passed’.

In a statement following the meeting, Mr Eustice said: ‘The water levels remain high and there is the risk of possible further flooding next week so everyone needs to remain vigilant, follow the advice and sign up for flood alerts.’