A former World War Two light airfield hangar has gone on the market for a staggering £1.4million after being transformed into a luxury, five-bedroom home.

The property, set in the Essex countryside near Dunmow, was one of hundreds of thousands of ‘Nissen huts’ erected in Britain during war-time using pre-fabricated sections and with distinctive curved roofs clad with corrugated sheets.

Many were abandoned or used as storage by farmers, with very few examples of the structures surviving across the UK, the Middle East, Asia and the Pacific.

But one hangar, surrounded by 2.3 acres of garden, has become one of the few structures to be converted into a private home boasting spectacular views of the sprawling countryside.

The 4,780 sq ft building, which is one of three surviving Nissen huts situated on the grounds of an old Georgian house near Dunmow, was once used house service personnel, from RAF to American forces. 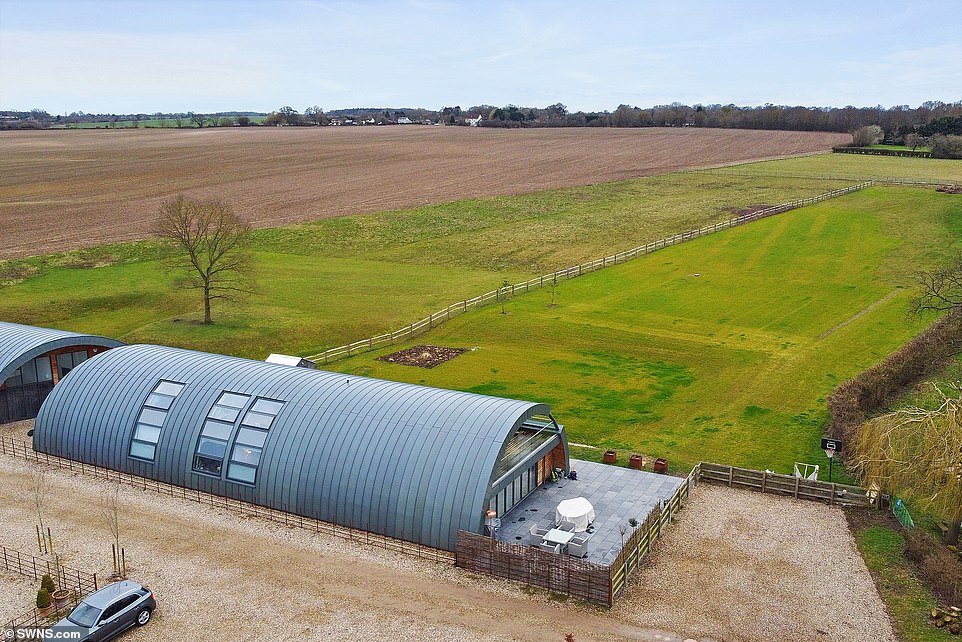 The property, set in the Essex countryside near Dunmow, was one of thousands of ‘Nissen huts’ erected in Britain during war-time – it is now a five-bed luxury home 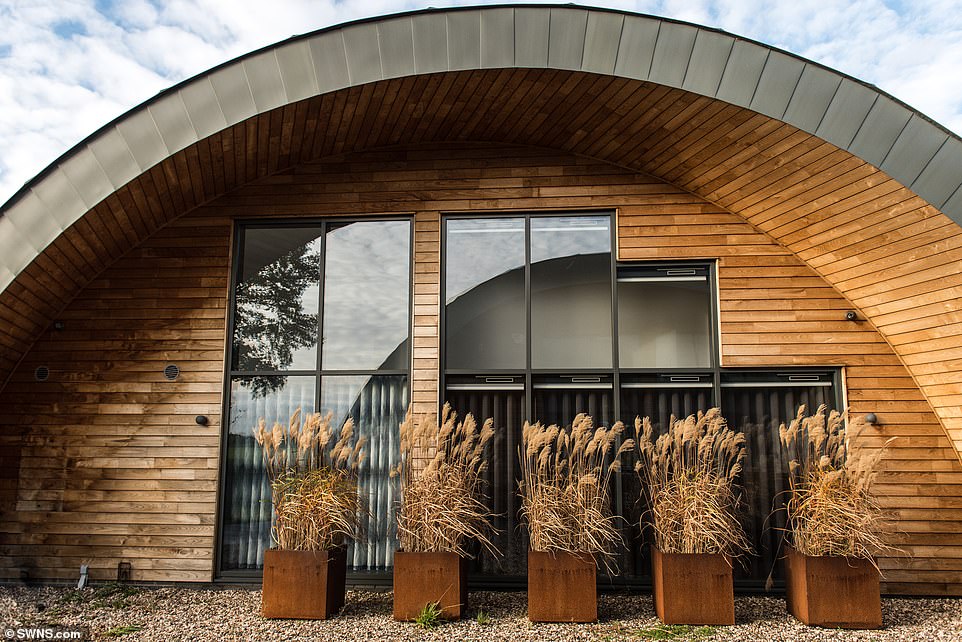 The building, which once housed RAF and American service men near the former RAF station Great Dunmow, is now the perfect family home for those looking to live a rural life within commuting distance of London

But now, in keeping with its original shape and structure, it has been converted into a two-storey, five-bedroom property, with a lift to the upper floor and two bedrooms.

Bi-folding doors extending onto a terrace with views across the countryside. 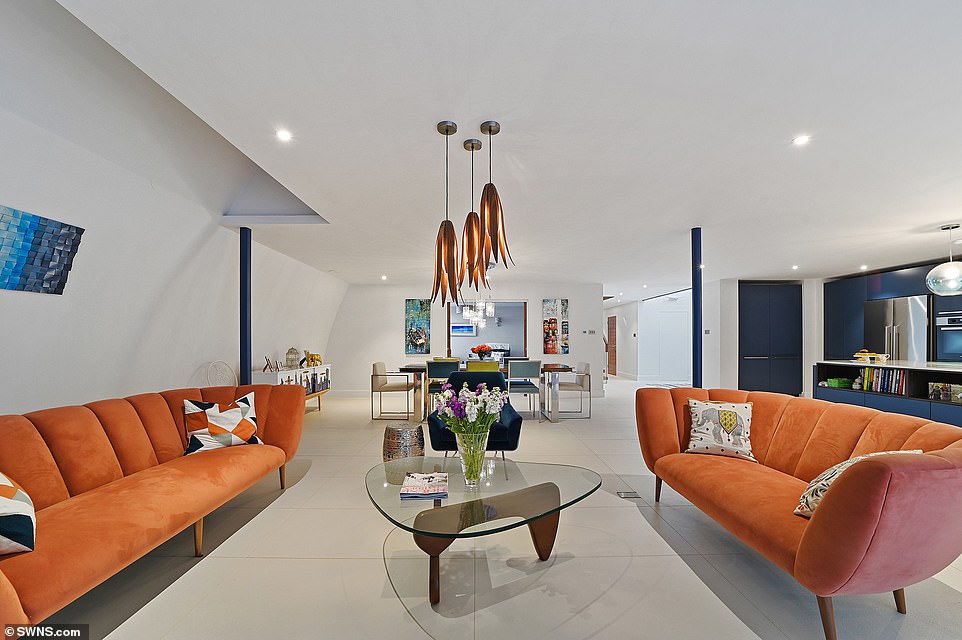 Modern interiors give no hint of the unusual cylindrical shape, with the slightly curved walls giving the space a quirky feel 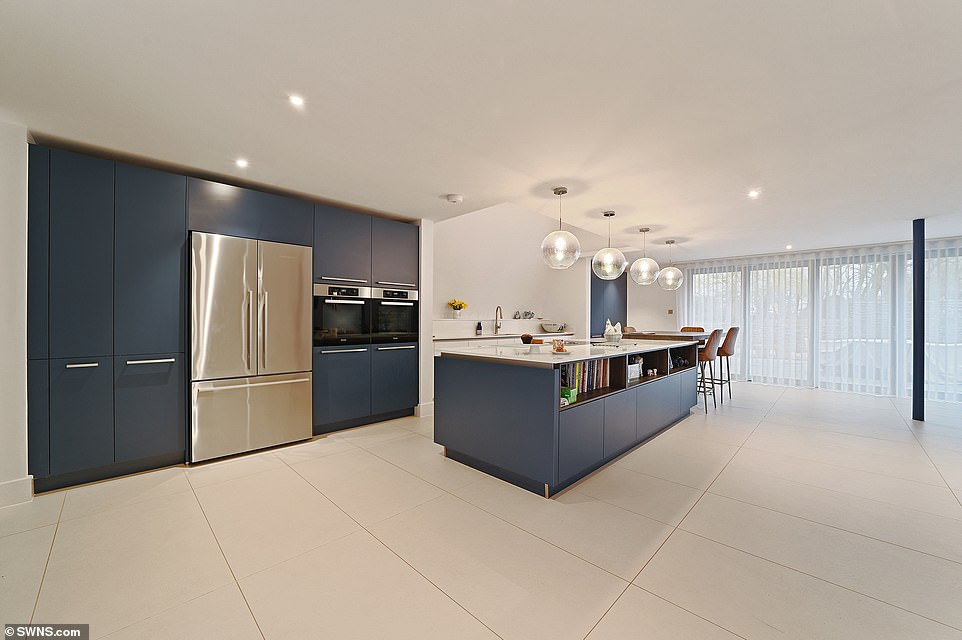 ‘You look at the outside of it and you feel like it just shouldn’t really work as a home.

‘But when you go inside, the curved back wall, which has been converted in the style of how it would have looked originally, is really quite impressive.

‘It’s kept its original shape, structure and footprint, too.’

Karl said that the former hangar, along with its two other counterparts beside it, were converted around two or three years ago.

The three huts sit just seven miles from the former RAF site, RAF Great Dunmow, which was in use from 1943-1948. 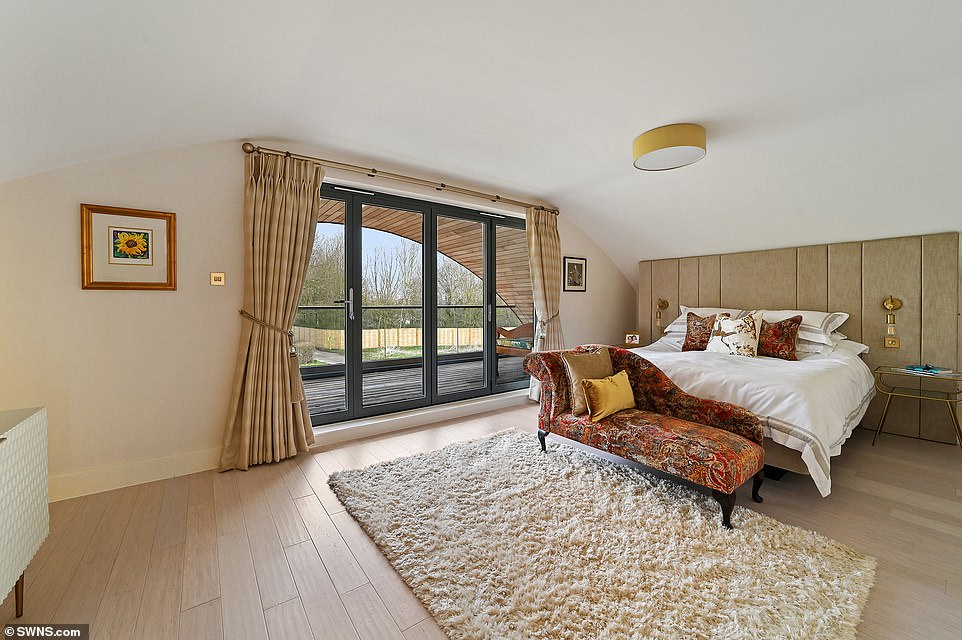 An incredible balcony in the master bedroom allows for light to flood into the room, providing scene views of the sprawling countryside towards Braintree, Essex 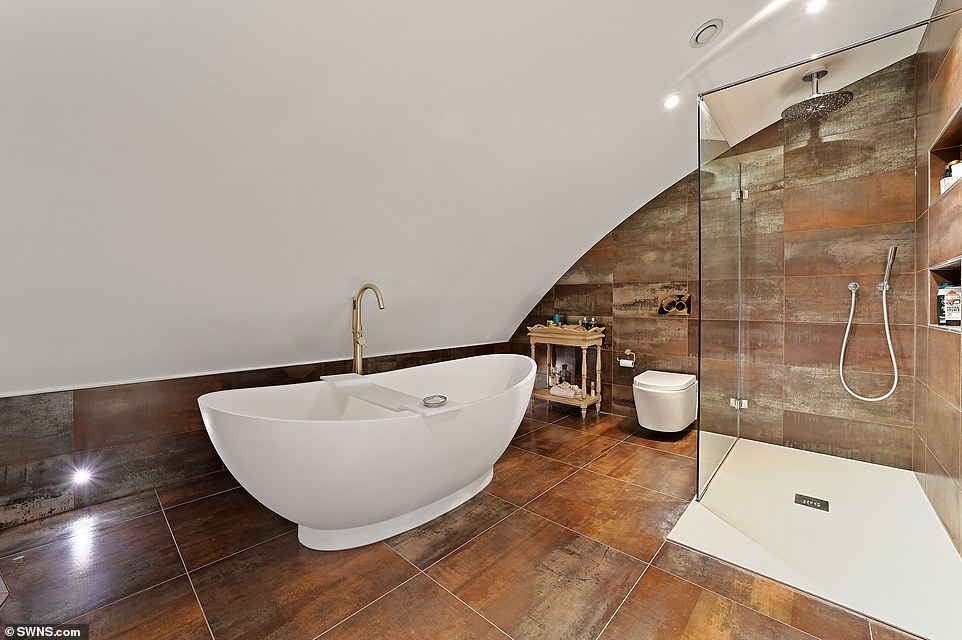 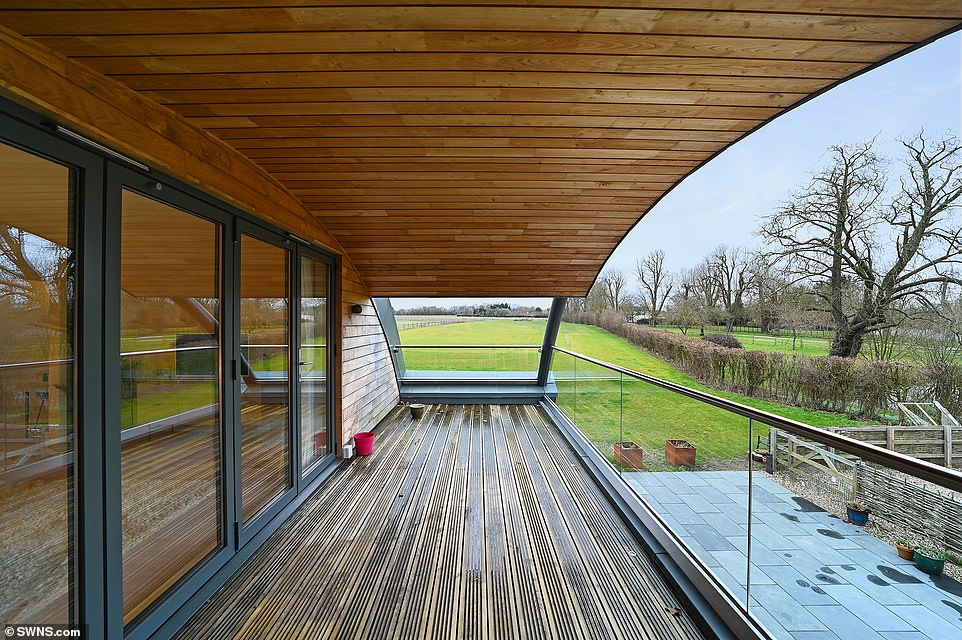 A balcony overlooks the property’s slate patio and the surrounding 2.3 acres, a great space for a large family 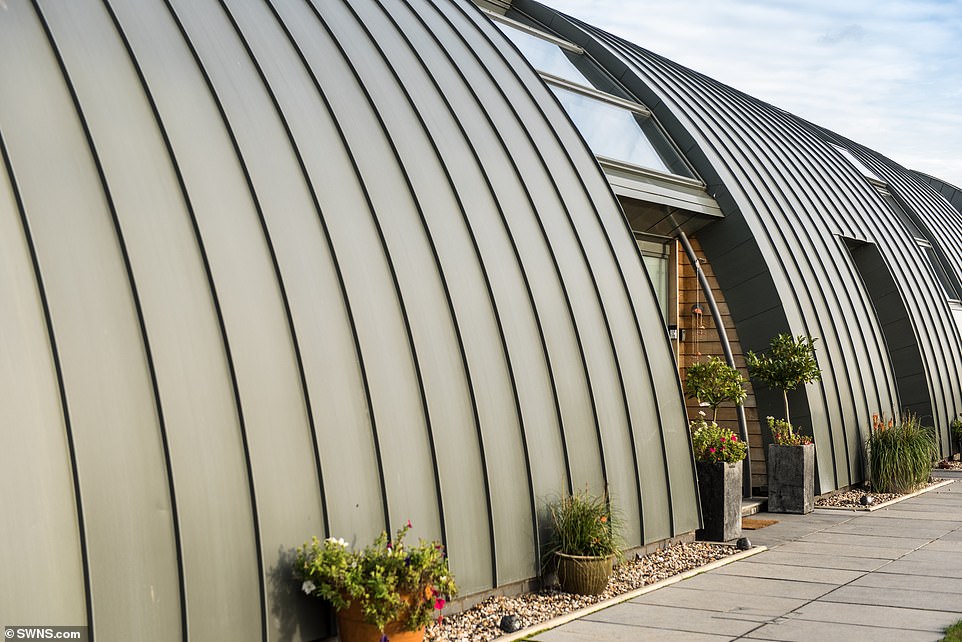 Karl added: ‘These huts were formerly used as lodgings for service personnel, and then after the war a lot of them became used for storage.

‘But because of the size of these three huts, they were converted about two or three years ago.

‘The other two huts are also currently lived in.’

Karl said this particular property has been on the market for around three weeks – and there has already been significant interest in it.

The Savills website reads: ‘The property is approached over a substantial shingle drive opening to a natural stone terrace. 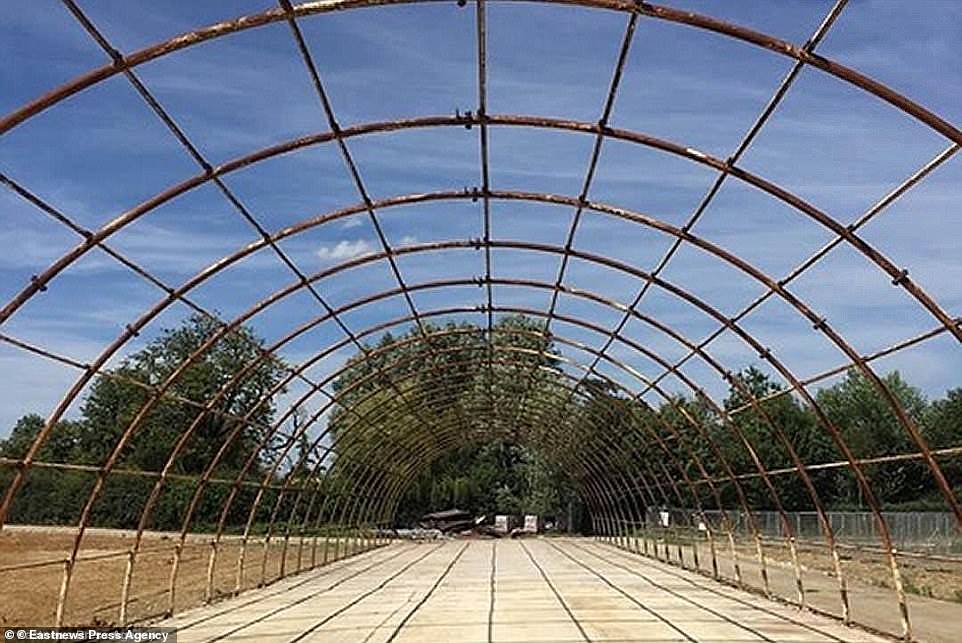 One of the three Nissan huts before being converted into a family home three years ago, only the metal structure stands 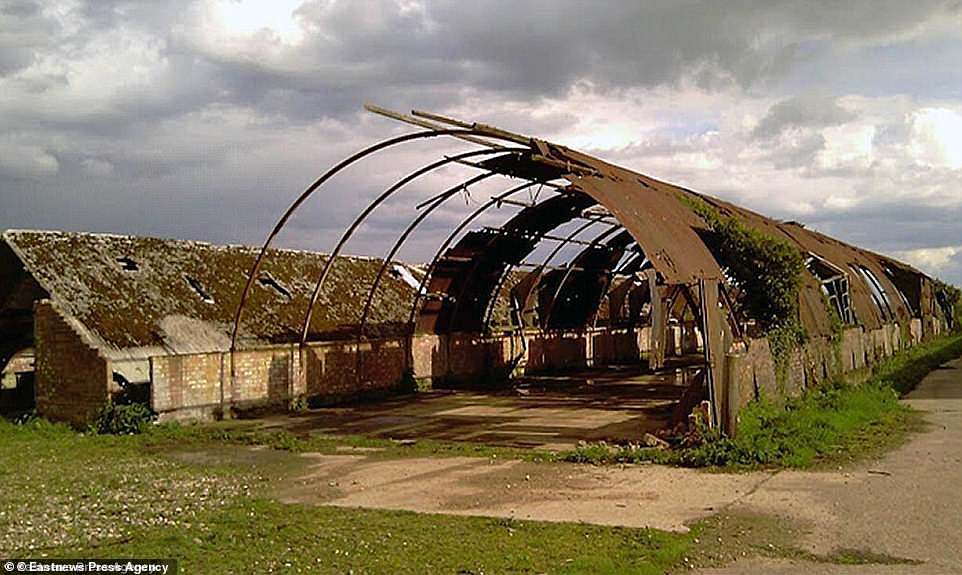 ‘A path continues along the side of the building leading to the principal entrance.

‘The gardens and paddocks are predominantly located to the west of the property, laid to lawn, providing a blank canvas and offering an ideal situation for equestrian or other outdoor interests. ‘

RAF Great Dunmow was designed as bomber airfield and was used by the United States Army Air Forces Eighth and Ninth Air Forces.

It’s B-24 and B-17 bombers were used in strategic bombing raids across France and Germany from 1943.

Nissen Huts: The wood and corrugated metal structures created in 1916 by British Army and used during both world wars

The famous Nissen Hut was created in 1916 by Major Peter Nissen of the 29th Company Royal Engineers of the British Army, whose prefabricated semi-circular structures were widely used in both world wars.

Before the end of the First World War 100,000 huts, made from wood and corrugated metal, were produced. They were turned into churches and bomb stores, as well as being used for accommodation.

The Nissen hut could be packed in a standard Army wagon and could be erected by a small team of men. The record for putting one together was one hour and 27 minutes. 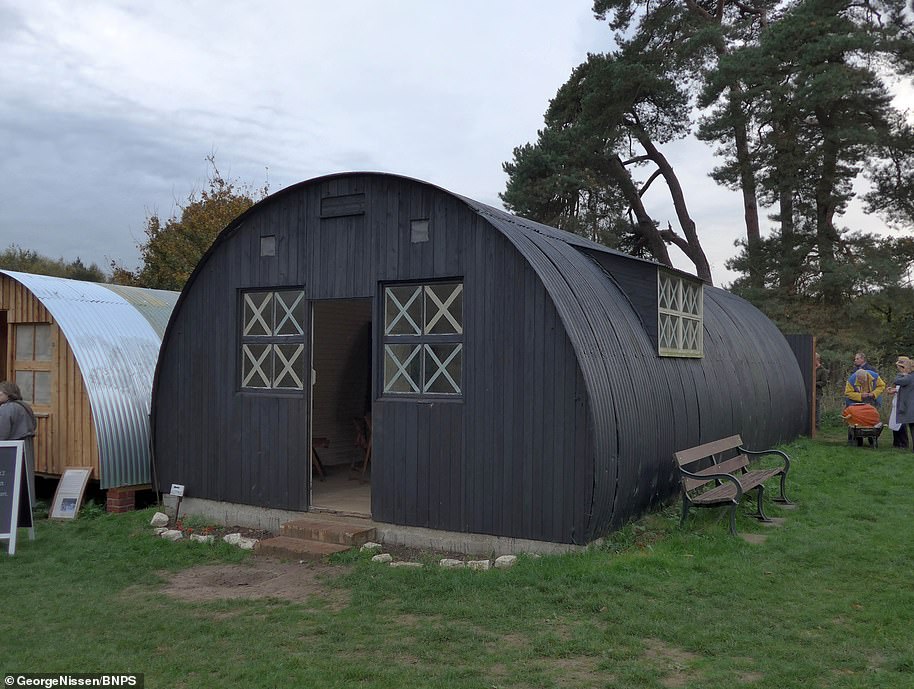 Nissen patented his prefabricated steel structure in the UK in 1916 and patents were taken out later in the United States, Canada, South Africa and Australia.

After production dropped off between the wars, they again began to be mass-produced in 1939 and came into their own across the globe in World War Two.

But while they were quick to erect, they were not always loved by those who stayed in them.  In Britain people complained they were cold and draughty – in the Middle East they were felt to be hot and stuffy.

After the war the huts were sold and the Government paid Nissen £13,000 –the equivalent of around one million pounds now.

The Major was awarded the DSO (Distinguished Service Order). 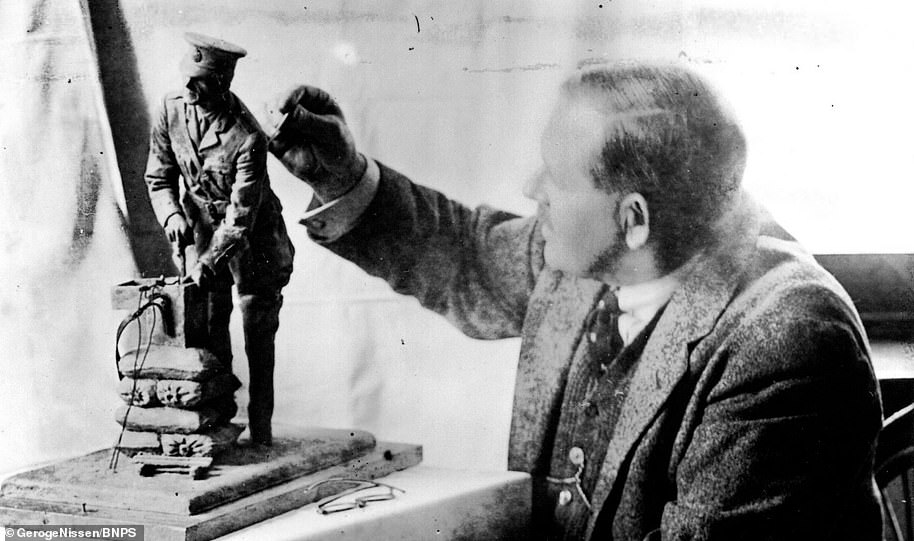 Major Peter Nissen was awarded the equivalent of £1million

Dropping by for a drink! Skydiver swoops down at 60mph and snatches a can of Red Bull off the ground

Dopey driver mows down cyclist at junction before asking ‘where did you come from?’