His spectacular fall from grace has seen all manner of treasures slip from his grasp — among them, a £30 million collection of Old Masters, a £6 million townhouse in Kensington and what’s described as the most beautiful house in Ireland.

But, in a dramatic development in the High Court yesterday, former Tory Party treasurer Lord Magan — declared bankrupt last November, as I disclosed — fought to have his bankruptcy annulled.

Magan, whose fortune was once estimated at £200 million, was represented in court by his son, Ed Magan, 46. 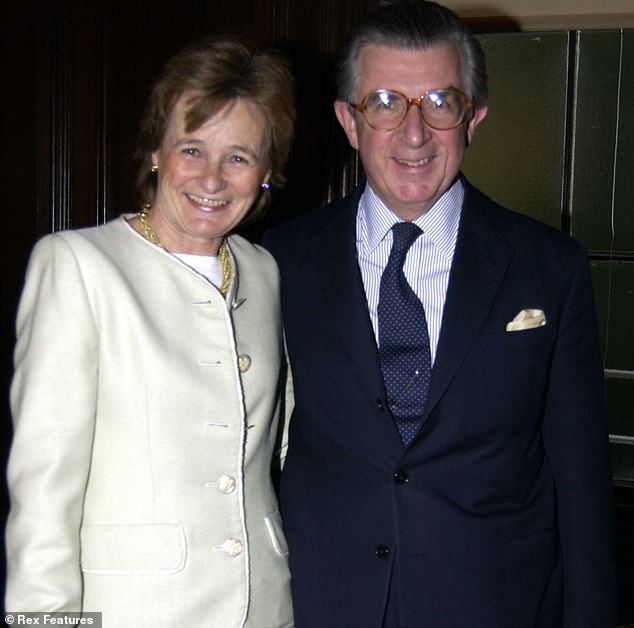 In a spirited defence, Magan junior made a startling allegation against the trustees in bankruptcy now handling his father’s affairs, drawing particular attention to the fate of his father’s private pension, which, he told the High Court, pays out a staggering £354,606-a-year.

‘We believe that the trustees in bankruptcy are trying to get this pension scheme for themselves to cover their costs,’ he said.

He explained that his father and mother, Wendy, are currently dependent on the state pension. ‘[My father] made over £100 million but he committed everything to trust. He has no assets.’

Such penury was unthinkable in Magan’s glory days.

He made £20 million following the sale in 1995 of private equity firm Hambro Magan.

Magan subsequently acquired a £25 million estate in Shropshire, and then, in 1999, Castletown Cox in Ireland, which boasted its own ballroom and formal gardens designed by Mollie, Dowager Marchioness of Salisbury. 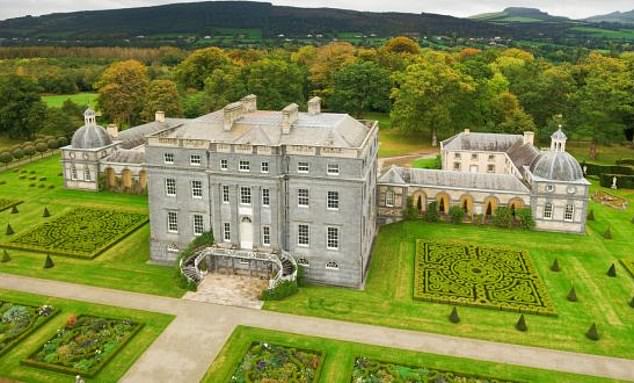 Lord Magan, whose fortune was once estimated at £200 million, acquired Castletown Cox in Kilkenny, Ireland in 1999

Aside from becoming Tory treasurer — and donating £1.49 million to the party — he also became a director of the Bank of Ireland, and a trustee of the Royal Opera House and London Philharmonic.

According to his son, Magan was too ill to attend yesterday’s hearing — even remotely. ‘He is on his back, unable to move,’ said Ed Magan.

Stuart Cottingham of Libertas Associates Ltd, the trustees in bankruptcy, says that the firm cannot comment on Lord Magan’s health, but tells me: ‘Mr Magan has been extremely selective and self-serving in his representation of facts and correspondence surrounding a purported pension held within a corporate entity.’

Judge Barber adjourned the hearing and ordered a medical report to be produced.

Despite her model genes, actress Poppy Delevingne — elder sister of Cara — claims her physical flaws once crushed her self-esteem.

‘I got acne when I was 29. Literally one morning I woke up and there it was. I had it for almost a year, unexplained, and it shattered my confidence,’ says the 34-year-old daughter of property developer Charles.

‘I used to feel embarrassed by it, but not any more. No one’s perfect.’

She adds: ‘I’ve had chronic eye bags since I was little, which I used to get teased about at school.

‘Now I try to embrace my panda-like eyes.’ 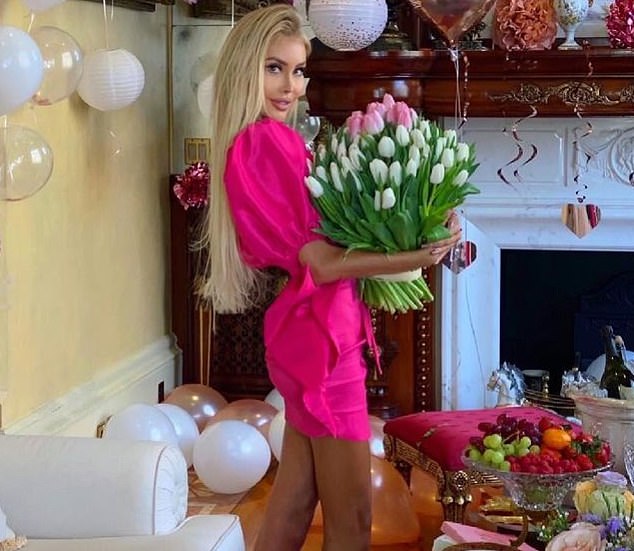 Who says money can’t buy you taste? Property tycoon Robert Tchenguiz’s live-in lover, Julia Dybowska, played up to her Barbie doll image this week when she celebrated her 30th birthday at his £20 million house in Kensington.

The Polish model, who lives with Tchenguiz, 60, on the fourth floor of his mansion while his estranged wife Heather Bird, 51, sleeps three floors below, showed off her tan from her recent trip to Mexico in a bright pink mini-dress and matching stilettos.

Declaring herself the ‘Birthday Girl,’ she posed with a bouquet of tulips.

Tchenguiz once hosted a party where he transformed the house, which overlooks the Royal Albert Hall, into a miniature Palace of Versailles, complete with acrobats from the Cirque du Soleil. 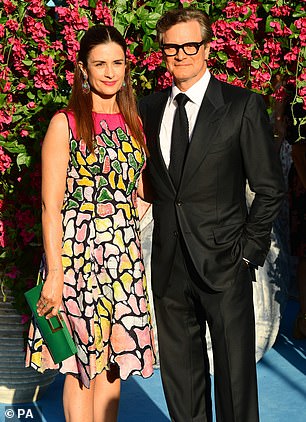 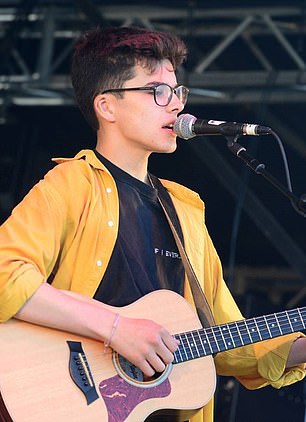 Colin Firth and his estranged wife Livia (left) have reunited in support of their son Luca, 20,(right at the Isle of Wight festival)

Oscar winner Colin Firth and his estranged wife Livia have reunited in support of their son Luca who released his debut solo single, Wings, this week.

‘Written, sung and produced by him without his parents’ input,’ gushes his mother, Livia, who describes herself and Colin as ‘incredibly proud’.

Exeter student Luca, 20, recorded the song while isolating at his student halls during the pandemic.

‘It’s a sort of autobiographical statement of where I was at that point,’ Luca explains. ‘I was confused and struggling to picture what I was going to do with my life — as so many people were at the time.’

Luc kicked off his musical career with a bang when he played at the Isle of Wight festival in 2018.

Judging by his lyrics it seems he has inherited his Italian-born mother’s natural exuberance: ‘I felt loved by the ones I need. I felt free. I could breathe. And when I grow wings, I’ll set you free.’

But the 32-year-old admits she’s struggling to adjust to these virtual ceremonies, which she ‘attends’ from her cosy bedroom in South London.

‘You do these Zooms of the ceremonies — they’re usually at 4am here because it’s LA time,’ she says.

‘I drag my sister out and we sit there and giggle, and they come to you and you clap. Then the computer closes, and we eat a bar of chocolate at 5am, watching some random TV, laughing, in our pyjamas.’ 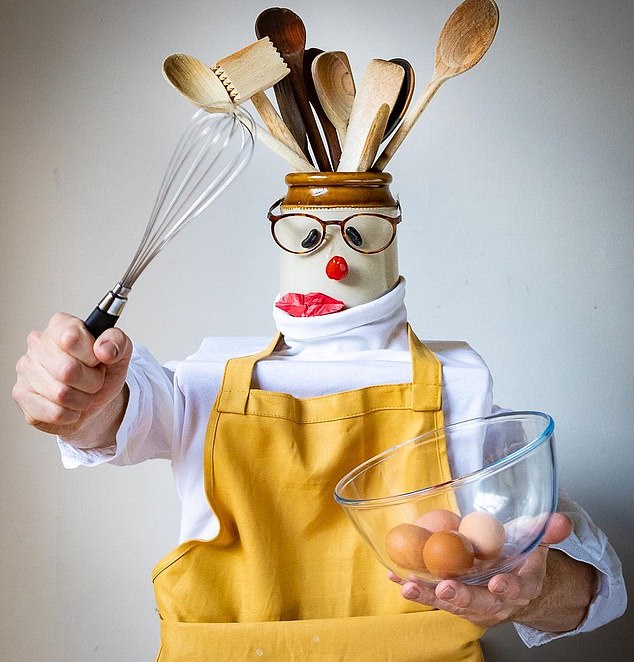 He’s a photographer by royal appointment, but Hugo Burnand has turned the camera on himself — with surreal results.

‘I hadn’t photographed anyone for ages, so I thought I’d create people,’ he tells me.

‘The hands are mine. I grabbed pots and clothing from around the house and these characters emerged.’

One of them is modelled on Heston Blumenthal, whom he has playfully named ‘Heston Bloomin’tools’.

The ‘Make New Friends’ series comprises 12 pictures, signed and embossed with the Royal Warrant, at £50 each with profits going towards Age UK and The Silver Line, of which the Duchess of Cornwall is patron.

‘Thank God I didn’t have to run a marathon to raise money for charity,’ jokes Prince William’s wedding photographer. ‘I’m a terrible runner.’

Former Made In Chelsea lothario Spencer Matthews, who is married to Irish model Vogue Williams, claims infidelity in their marriage would not be a deal-breaker.

‘I’d probably forgive her and take her back. I can’t be bothered with the whole divorce thing. We’ve got kids,’ says the Old Etonian brother-in-law of Pippa Middleton.