A teenager stabbed to death in front of a group of school children in south west London has today been named.

Hazrat Wali, 18, a student at Richmond Upon Thames College, was fatally wounded in a knife attack in Craneford Way, Twickenham.

After being stabbed, Mr Wali, an Afghan refugee who is reported to have come to the UK two years ago, is said to have staggered onto a playing field where local school children were playing rugby.

Witnesses say a teacher from the school ran over to give the teenager CPR in a desperate attempt to try to save his life. But Mr Wali died in hospital soon after.

Police meanwhile say witnesses filmed the shocking incident using mobile phones. It is believed the video has been circulating on social media.

Today a relative of Mr Wali described the teenager as a ‘very good boy’. 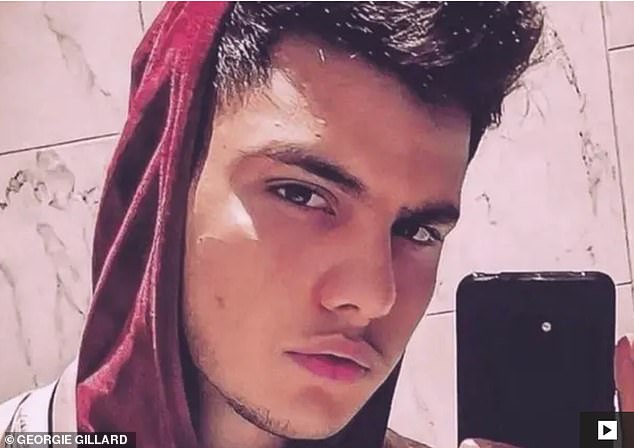 Hazrat Wali, 18, a student at Richmond Upon Thames College, was fatally wounded in a knife attack in Craneford Way, Twickenham, south west London 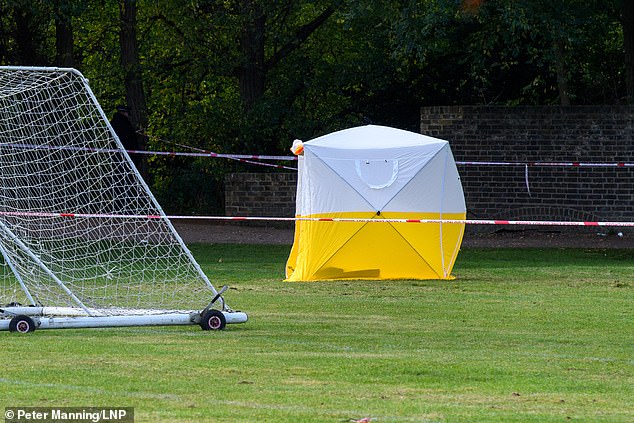 After being stabbed, Mr Wali, an Afghan refugee who is reported to have come to the UK two years ago, is said to have staggered onto a playing field where local school children were playing rugby. Pictured: A police forensic tent at the scene today

The unnamed relative told the Evening Standard: ‘He came here to study, he was living all on his own in London. His immediate family are all back in Afghanistan.

‘I saw him in hospital. He had a fight is all that I had heard.’

His close friend Sahil Kochay said: ‘He was a very good person. Very caring and loved everyone.’

Lessons today were called off at the College Mr Wali attended as a mark of respect.

Dr Jason Jones, Principal of Richmond upon Thames College told MailOnline: ‘Our thoughts and prayers are with the student’s family and friends at this difficult time.

‘This loss is sure to raise many emotions, concerns, and questions for our students, parents, staff and local community.’

He said the school had implemented an emergency response plan and had increased security around the school in response to the fatal stabbing.

Dr Jones added: ‘We have enhanced security and surveillance at our entrances following yesterday’s incident and are continuing to work in full co-operation with the Metropolitan police, who are handling the matter’.

It comes as police continue to hunt for Mr Wali’s killer following the incident on Tuesday.

The teenager was rushed to an outer London hospital by ambulance following the stabbing, which took place around 4.45pm. Mr Wali was pronounced dead at 5.54pm.

Police are today appealing for information and believe witnesses may have filmed the shocking incident. They are urging people not to share the footage online.

Detective Chief Inspector Vicky Tunstall said: ‘The incident occurred in a playing field area and was witnessed by a number of people.

‘Some of those people are believed to have filmed events as they unfolded; I ask that any videos are not shared via social media to avoid causing the young man’s family any more distress at this already incredibly difficult time for them. 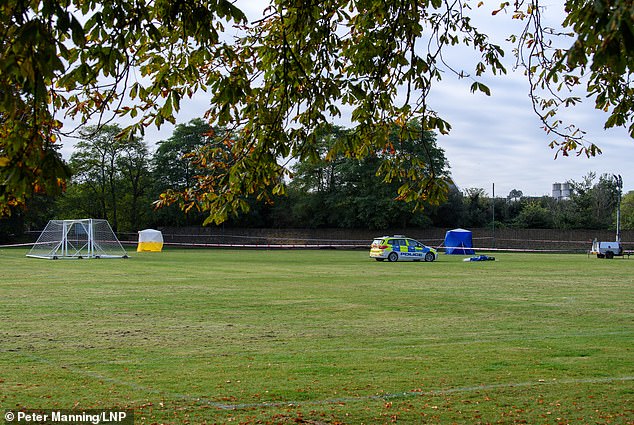 The 18-year-old victim was fatally wounded after a row broke out during a kick-around in south-west London, local residents say. Pictured: Police at the scene today

Metropolitan Police are investigating the death of a teenager after he was fatally stabbed on playing fields in southwest London. Pictured: Police at the scene last night

‘Instead, please go to the police immediately. A number of people have spoken to us, but we need to hear from anyone who has information that could help.

‘We’re working to establish the motive behind this tragic incident and following a number of leads. If you believe you can help us, then please make contact.’

One local student, 17, said the video was being shared on social media site Snapchat.

The student, who asked not to be named, said: ‘Things like this are not normal and should just not be happening.

‘I saw people posting about it on Snapchat saying ‘someone has been stabbed outside Richmond College’ and posting laughing emojis.

‘Imagine if that was your child, they are a human being.

‘I didn’t know him well but he seemed like a nice chilled guy, we would say hello to each other.

‘I am a rugby coach nearby, I could have been coaching round here and it could have happened to me.

‘I said goodbye to my nan, gave her a hug and returned home. He never got the chance to come home.’

The scene of the incident – near to the Harlequins Rugby Club – was sealed off today while forensic officers carry out an investigation.

Detectives are working to inform the victim’s next of kin. No arrests have yet been made, the force said.

Officers were called to an incident on Craneford Way in Twickenham yesterday afternoon. They found a man, believed to be aged in his late teens, who was suffering from knife wounds

The scene of the incident – near to the Harlequins Rugby Club – has been sealed off while forensic officers carry out an investigation.

In a statement, the Met Police said: ‘Police were called at 16:45hrs on Tuesday, 12 October to reports of a stabbing in Craneford Way, Twickenham.

‘At the scene a male, believed to be in his late teens, had sustained knife wounds.

‘He was taken by LAS to an outer London hospital where he was pronounced dead at 17:54hrs.

‘Enquiries are underway to notify his next of kin.

‘A crime scene and cordons remain in place and at this early stage there have been no arrests.

‘Anyone who witnessed this incident or has footage is asked to call police on 101 or Tweet @MetCC quoting 5697/12OCT.’

Information can also be provided to Crimestoppers, anonymously, by calling 0800 555 111.

The incident is believed to be the  25th teenager to be murdered in London this year.

It is also believed to be the 102 investigation launched by the Met Police homicide team in 2021.

The victim was rushed to an outer London hospital by ambulance but was pronounced dead at 5.54pm

It comes after officers investigating the death of Nicole Hurley, 37, in Primrose Hill, west London, on Sunday.

Ms Hurley’s boyfriend Jason Bell, 40, was arrested later that day and was last night charged with her murder. He appeared in court yesterday.

Meanwhile, police are also investigating the death of a 51-year-old man found dead after police were called to a home in Chelsfield Lane, Orpington, at around 11.46pm on October 9.

A woman in her 40s, who was known to the victim, was arrested on suspicion of murder and later released on police bail.