Afghanistan's collapse continues: Taliban capture two more cities taking total to nine as US intel warns Kabul could fall in a MONTH - handing control of the country back to the Islamists
Advertisement

The Taliban has captured two more cities in Afghanistan bringing the total captured to nine, as US intelligence warns the capital Kabul could fall within a month.

Pul-e-Khumri, capital of Baghlan province, and Faizabad, capital of Badakhshan, fell to the Islamists overnight while a unit of commandos holding out at the airport in the city of Kunduz – captured by the Taliban several days ago – also surrendered as the fanatics cemented their control on the north of the country.

Mazar-i-Sharif, the north’s largest city and a traditional stronghold of anti-Taliban warlords, is now preparing for an all-out assault with President Ghani flying there along with reinforcements today in a desperate attempt to shore up the defences and prevent a rout.

But assessments of the security situation are increasingly grim, with US intelligence sources warning the heavily-defended capital of Kabul – one of the few cities not currently under attack by the Taliban – could fall in as little as a month, handing control of the country back to the Islamists. 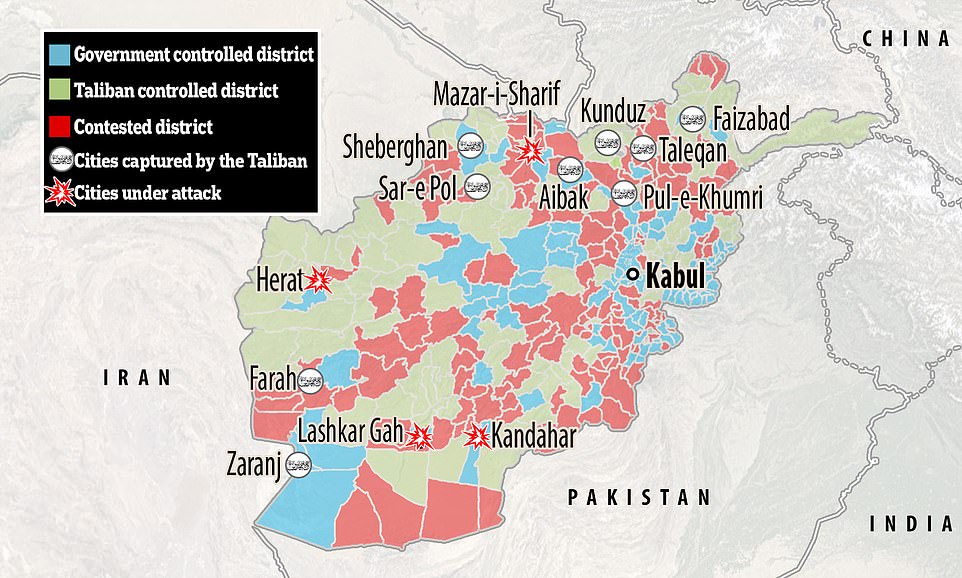 The Taliban has captured nine of Afghanistan’s 35 regional capitals in less than a week, with the cities of Pul-e Khumri and Faizabad in the country’s north falling into the Islamist’s hands overnight 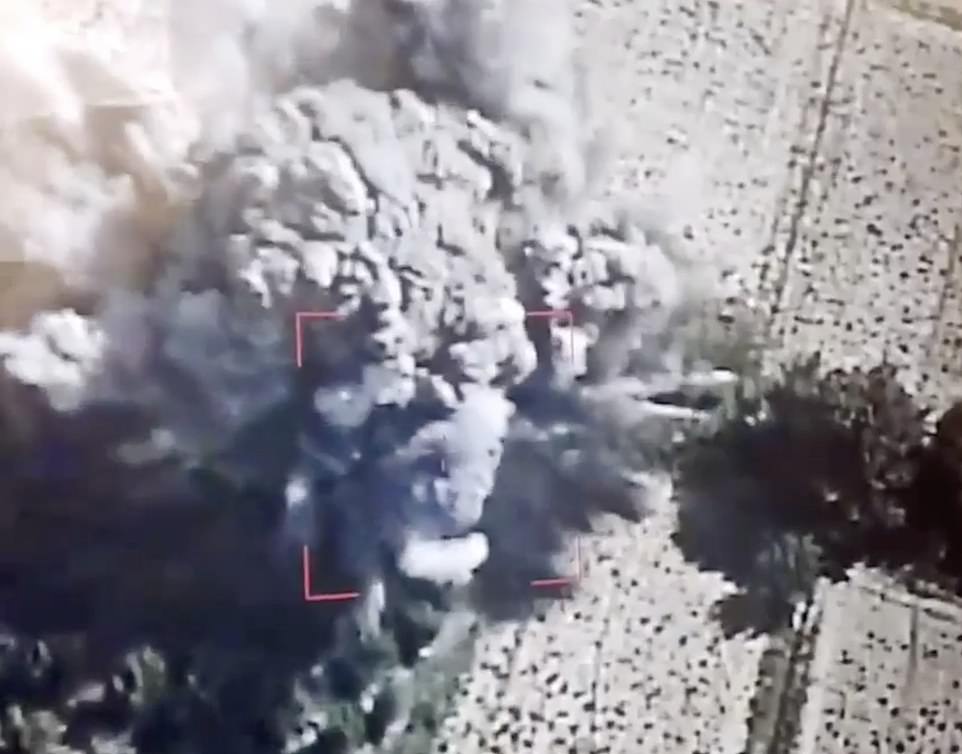 The Afghan air force has been uploading videos showing attacks on Taliban fighters in an attempt to bolster morale and turn the tide of the war, with few battlefield victories to report 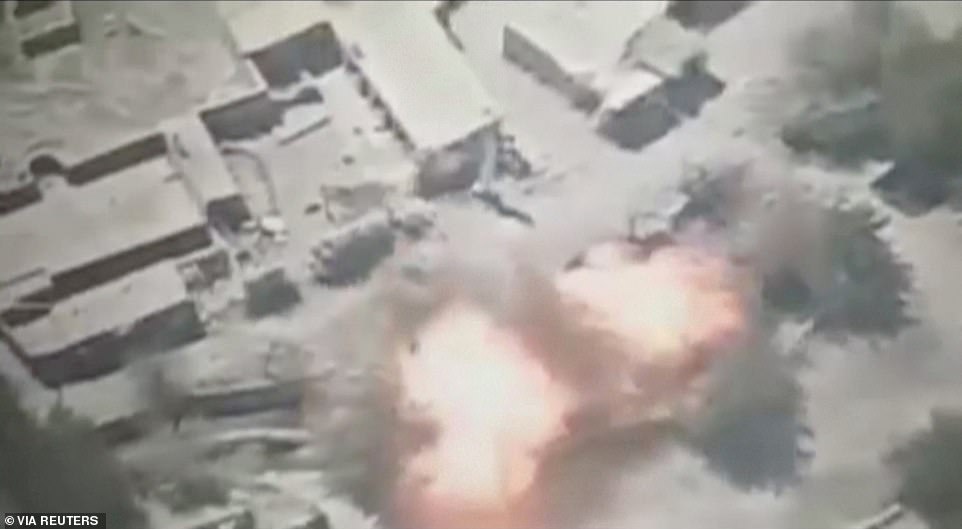 Footage taken by the beleaguered Afghan air force has been posted online, showing Taliban fighters being blown to bits in an attempt to boost morale among government troops 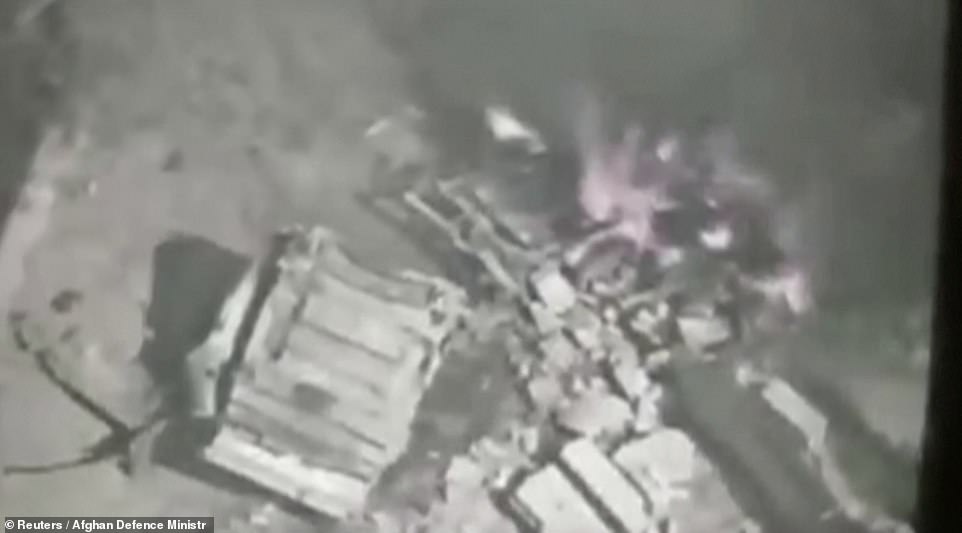 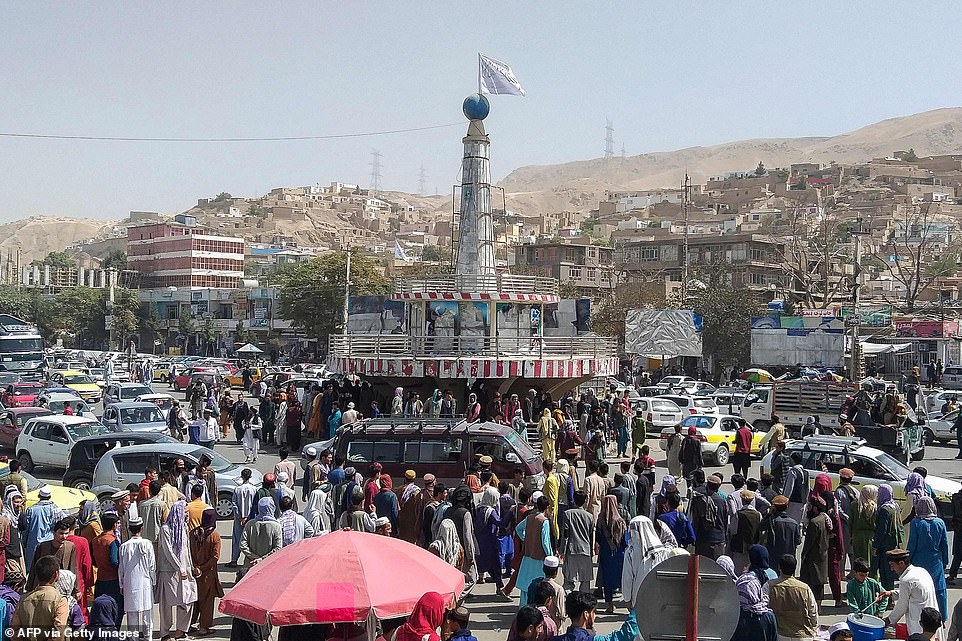 The Taliban flag is raised over the main square in Pul-e-Khumri, capital of Baghlan province, after the Islamists seized it from government forces late on Tuesday 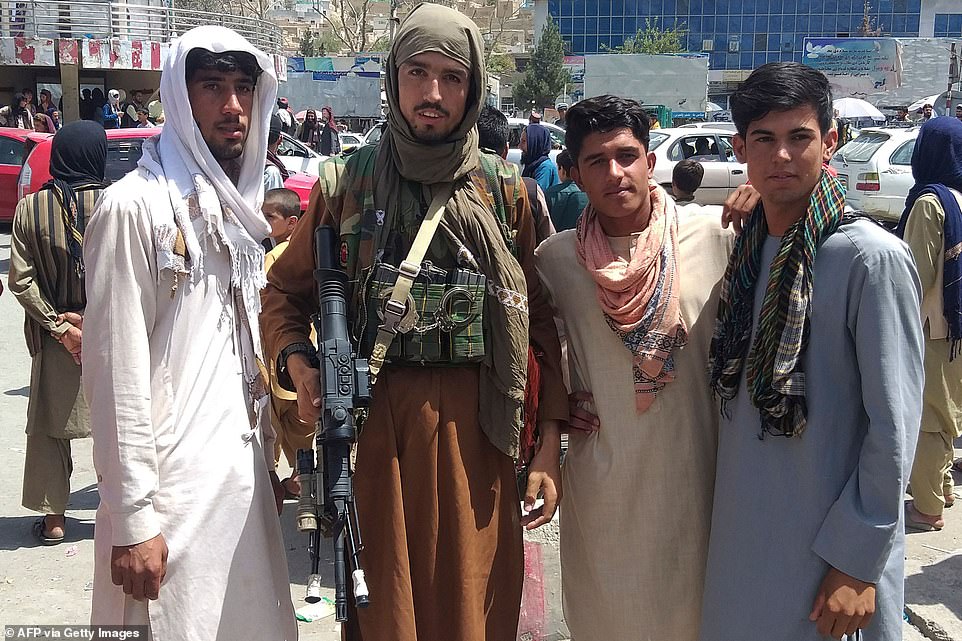 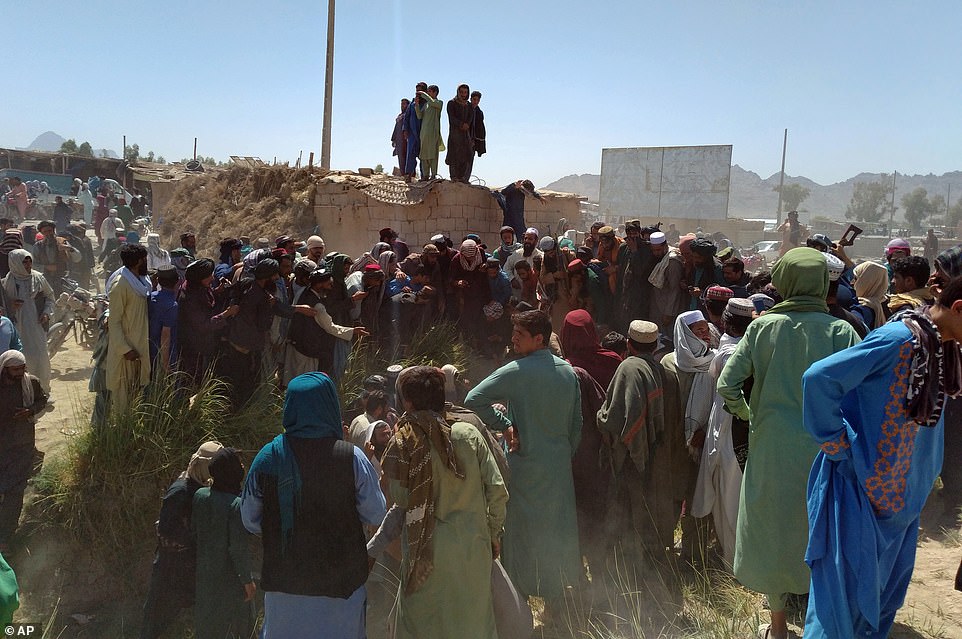 Taliban fighters and Afghans gather around the body of a member of the security forces who was killed, in the city of Farah

The Taliban is sweeping across Afghanistan, seizing territory and cities from the government – some of which have been given up with barely a fight.

Hundreds of thousands of people have fled as the militants closed in, with the UN estimating that 400,000 were displaced in the first few months of this year including 244,000 who have fled their homes since May when fighting began ramping up.

Most have remained within the country, heading into government-controlled areas in the hopes of finding safety there, with many ending up in the capital Kabul.

Some 200 crossed the border into Iran at the weekend, the UN says, joining millions of other Afghan refugees who have fled to the country starting four decades ago with the Soviet invasion.

Others have headed south towards the border with Pakistan, but with the Taliban in control of the main crossing and Pakistan saying it will not accept more refugees, it is unclear how many have crossed.

Pakistan is already home to at least 2.5million displaced Afghans, though the true toll is thought to be much higher once undocumented refugees are included.

American officials had previously said Kabul could hold out for between six months to a year after US forces withdrew, but have now dramatically downgraded that assessment after a series of victories for the Taliban.

Those involved in providing security for American diplomats in Kabul told the Washington Post that they are now contingency planning for how to get their staff out in the event that security collapses within 90 days.

Others put the time-frame even shorter, saying a collapse is possible within just 30 days.

India has already withdrawn its diplomatic staff from Mazar-i-Sharif, flying them out on Tuesday after fighting broke out on the city’s outskirts.

In an attempt to halt the Taliban advance, Ghani flew to the city Wednesday and met with Atta Mohammad Noor, Mazar’s strongman leader, and Abdul Rashid Dostum, a notorious anti-Taliban warlord who served in Soviet ranks.

Earlier in the day, Dostum had been pictured loading on to an aircraft in capital Kabul along with hundreds of his loyal commandos before flying into Mazar where he will join the fighting.

The warlord returned to Afghanistan from his base in Turkey last week to help appraise the security situation, and his flight to Mazar comes just two days after Taliban fighters captured one of his sprawling mansions in Jawzjan province – uploading videos of themselves walking around inside.

Even as the government’s focus shifted to the north, battles continued to rage in the west and south of Afghanistan – with clashes underway in the major cities of Herat, Lashkar Gah and Kandahar.

In Kandahar, fierce clashes erupted between Taliban insurgents and security forces, with heavy fighting being reported near the city’s prison, which the militants have been trying to reach for weeks. 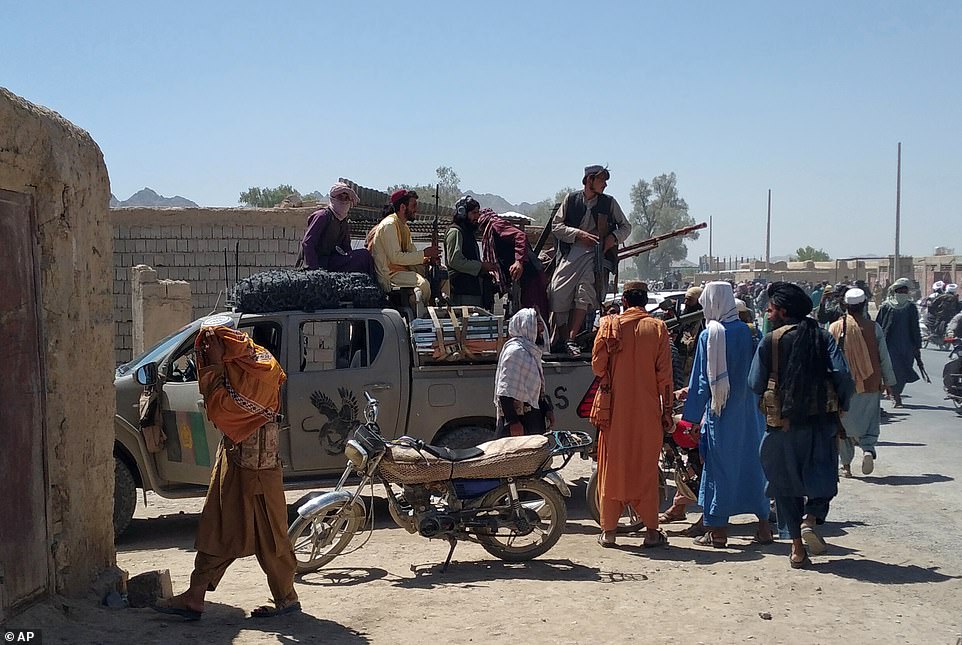 Taliban fighters patrol inside the city of Farah, capital of Farah province, after capturing the city earlier this week 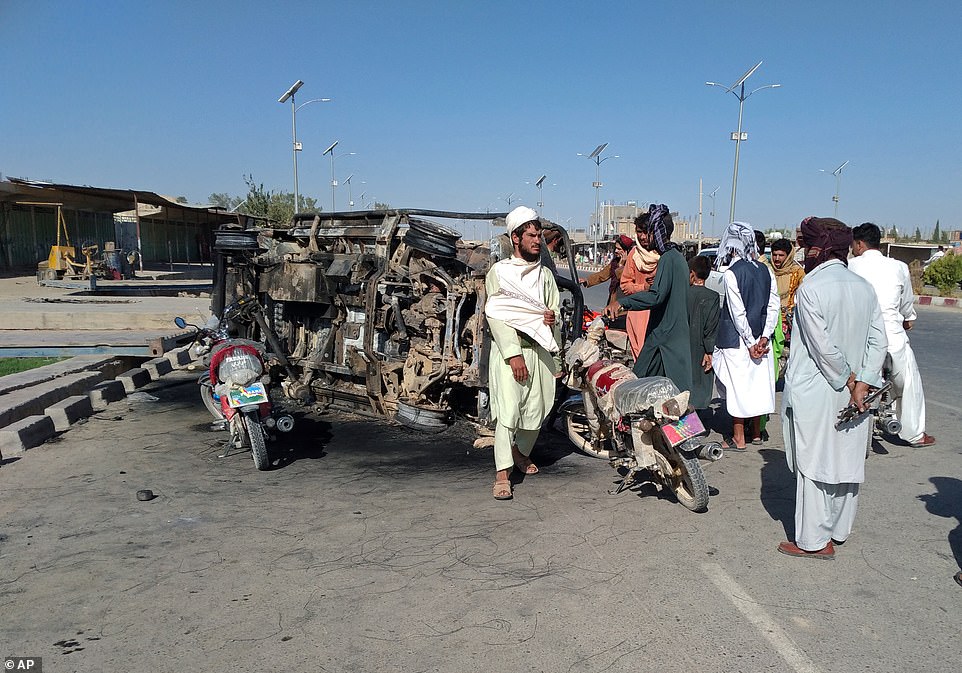 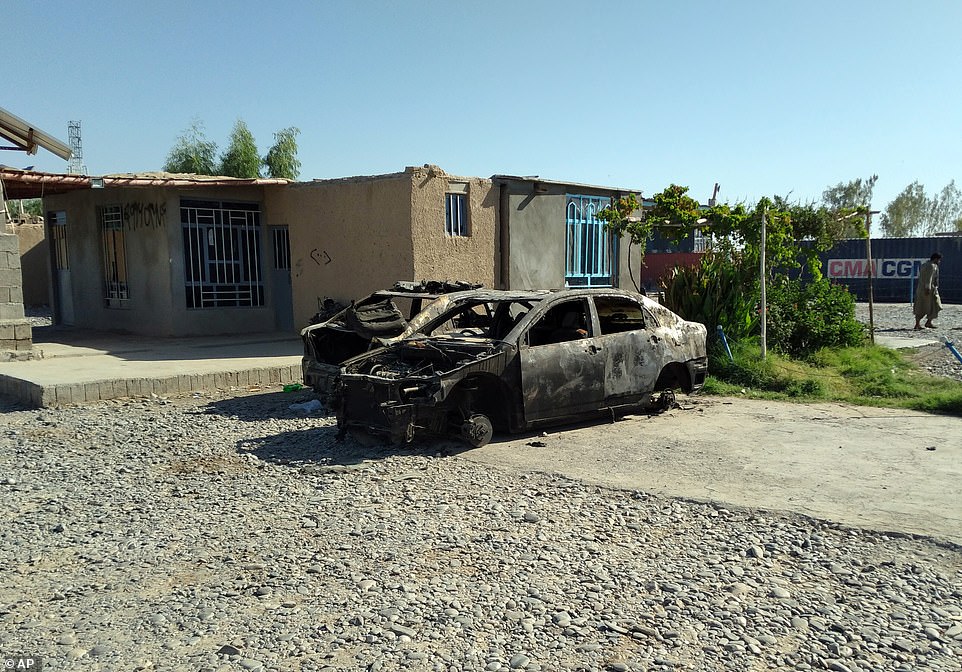 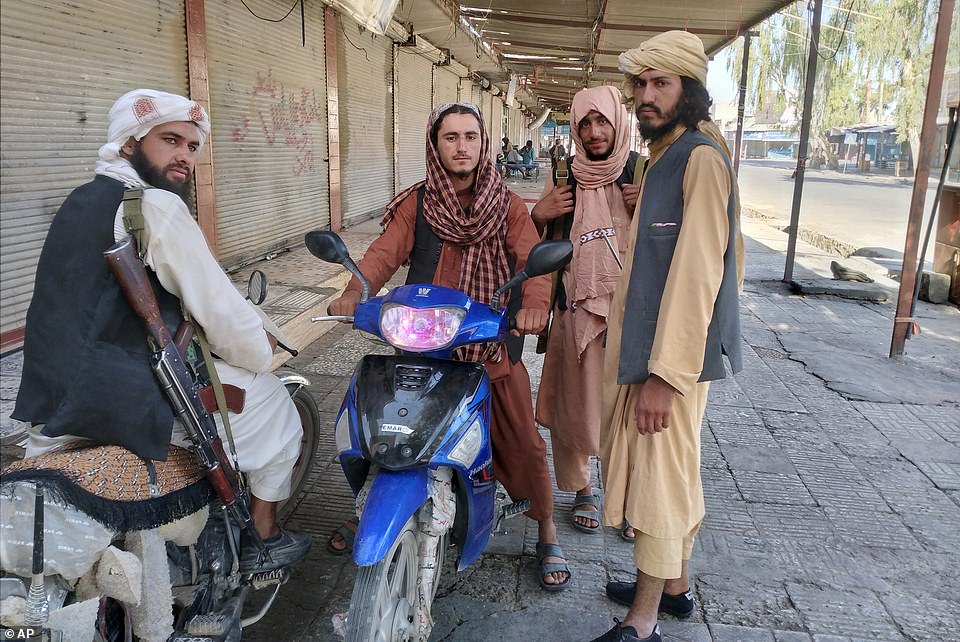 Taliban fighters calmly patrolled the streets of Farah on Wednesday, but those who have fled fighting in these cities have reported reprisal attacks and beheadings carried out by the militants 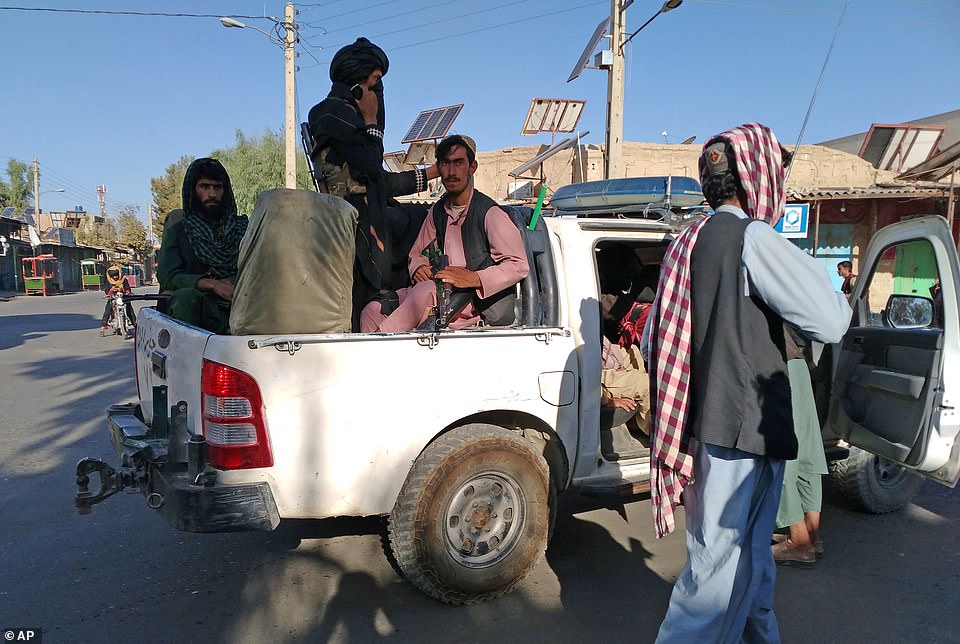 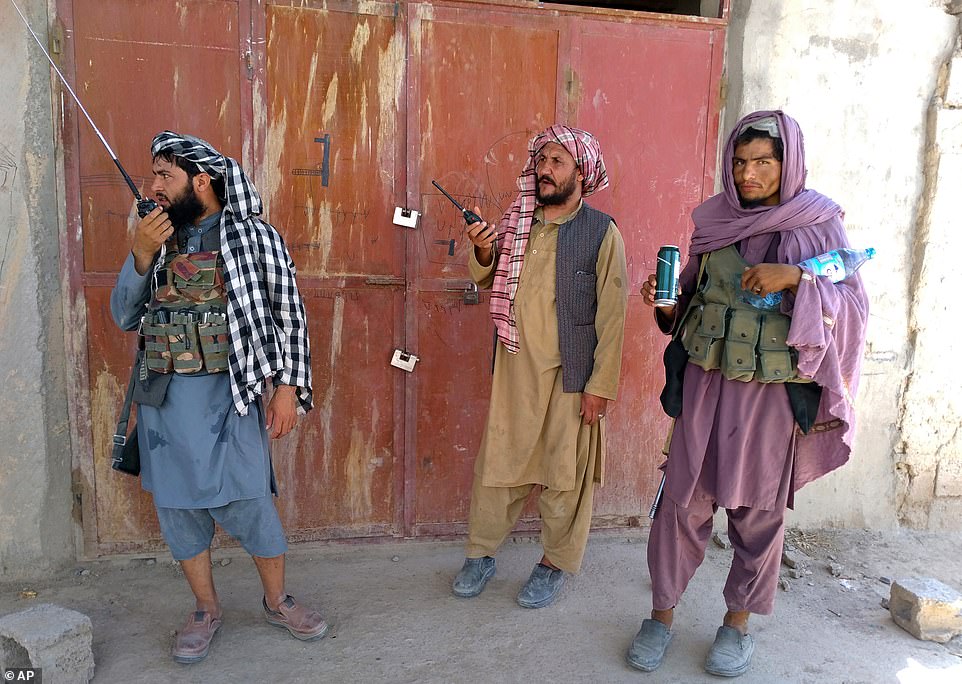 While the Taliban have portrayed themselves on the international stage as reformed moderates, those on the ground say fighters (pictured) are brutal extremists 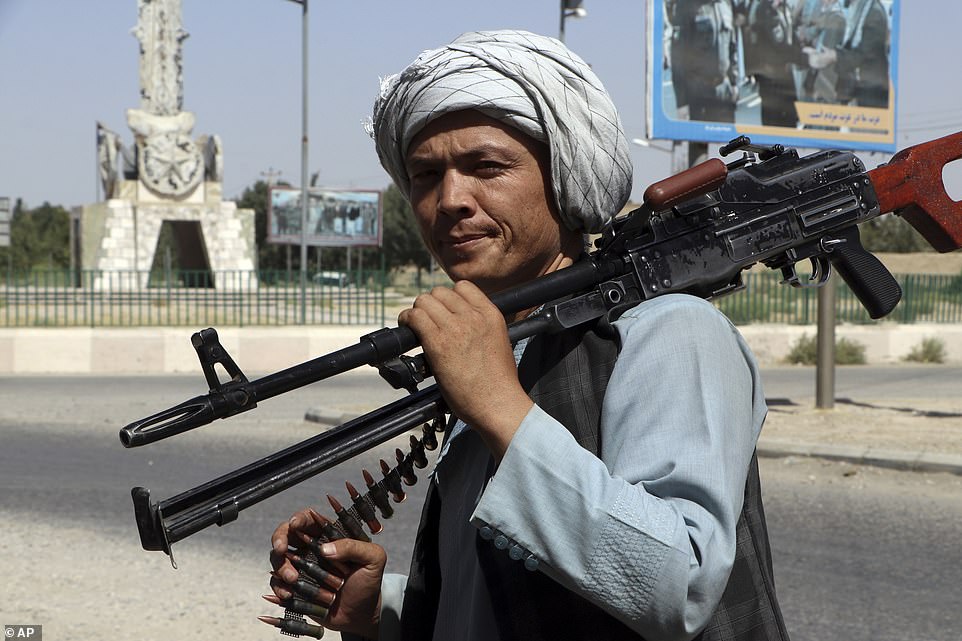 A fighter loyal to warlord Ata Mohammad Noor, the strongman leader of Mazar, poses with a heavy machine gun ahead of an expected Taliban assault on the city 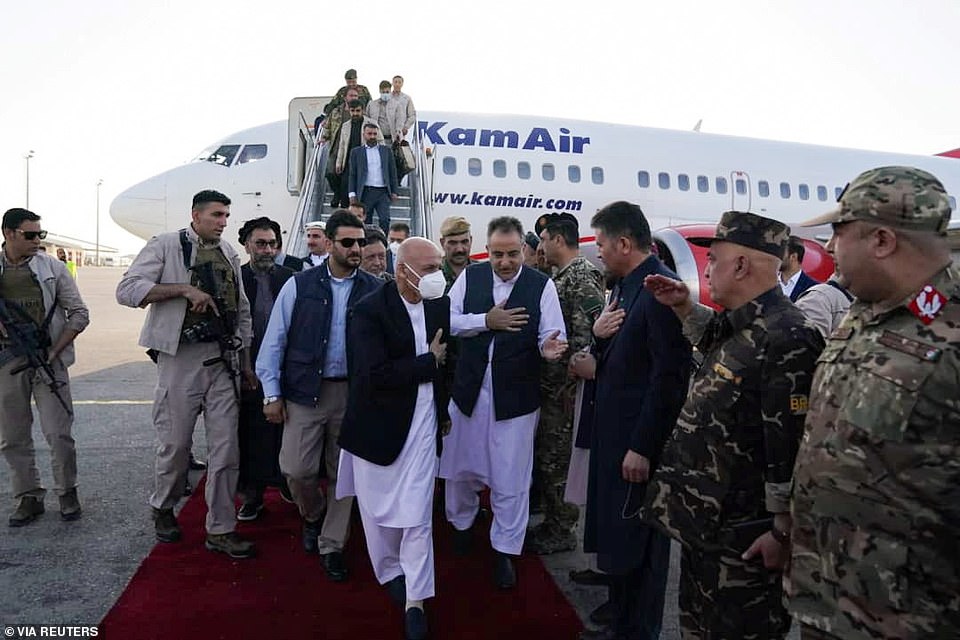 President Ashraf Ghani flew into the city of Mazar-i-Sharif, the largest in Afghanistan’s north, to help rally his troops ahead of what is expected to be a major assault on the city after opening skirmishes on the outskirts on Tuesday 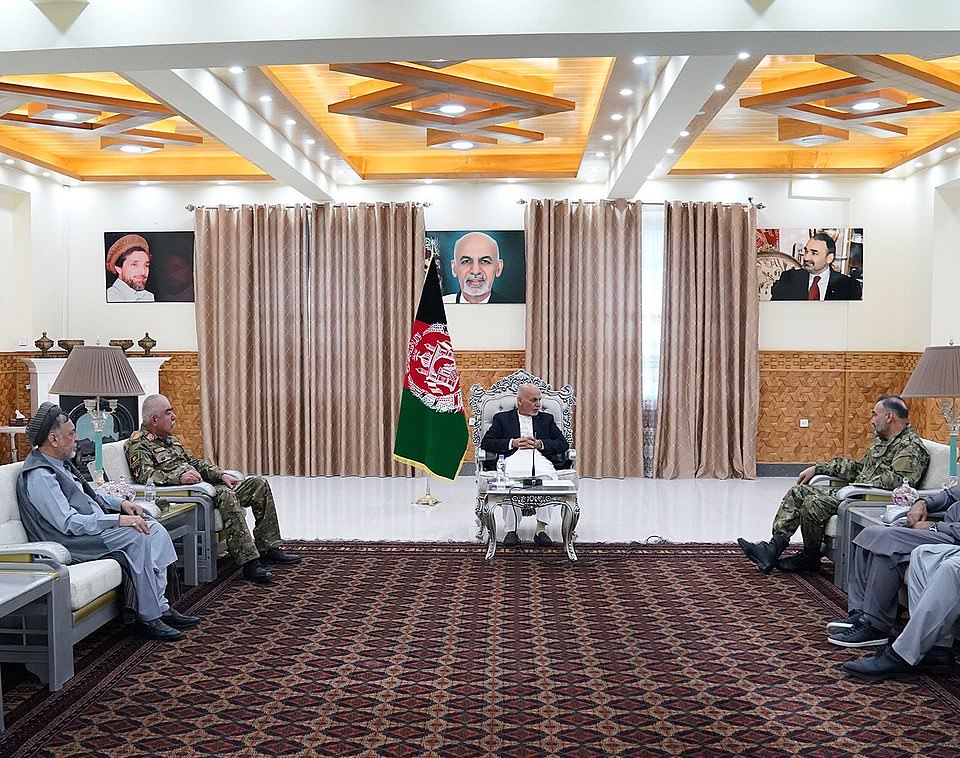 The Taliban frequently target prisons to release incarcerated fighters and replenish their ranks.

Fighting in Afghanistan’s long-running conflict has escalated dramatically since May, when the US-led military coalition began the final stage of a withdrawal set to be completed before the end of the month.

But even as the Taliban routed government forces, US President Joe Biden gave no hint of delaying his deadline to withdraw all American troops by August 31, instead urging Afghan leaders to ‘fight for themselves’ on Tuesday.

‘I do not regret my decision’ to withdraw US troops after two decades of war, he told reporters in Washington.

And as fighting raged, US diplomats were desperately trying to breathe life back into all but dead talks between the Afghan government and Taliban in Doha, where Washington’s special envoy Zalmay Khalilzad was pushing the hardline Islamists to accept a ceasefire.

Biden has stressed that Washington would continue to support the Afghan security forces with air strikes, food, equipment and money for salaries.

‘They have got to want to fight. They have outnumbered the Taliban,’ he said.

The Taliban have appeared largely indifferent to peace overtures, and seem intent on a military victory to crown a return to power after their ouster 20 years ago in the wake of the September 11 attacks.

The insurgents appeared to be consolidating their hold over captured cities in the north, with rifle-toting militants patrolling the streets of Kunduz on foot and in armored humvees as smoke rose from smoldering shops destroyed during the fight for the city.

After conquering most of the north, the Taliban have now set their sights on region’s biggest city, Mazar-i-Sharif – long a linchpin for the government’s control of the area – after capturing Sheberghan to its west, and Kunduz and Taloqan to its east.

Mazar saw some of the bloodiest fighting during the Taliban’s scorched earth rampage through the country in the 1990s, with rights groups accusing the jihadists of massacring up to 2,000 civilians – mostly Shiite Hazaras – after capturing the city in 1998. 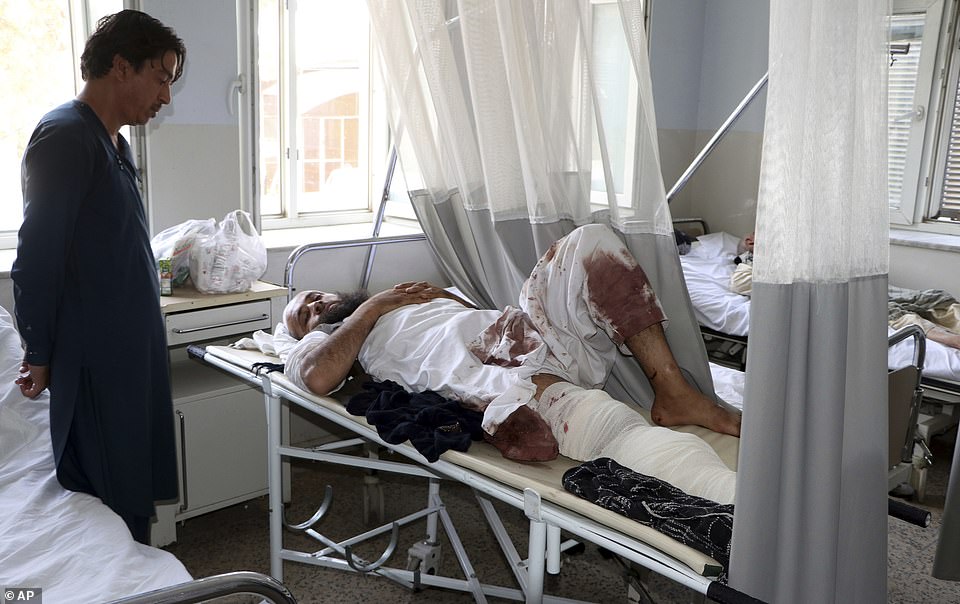 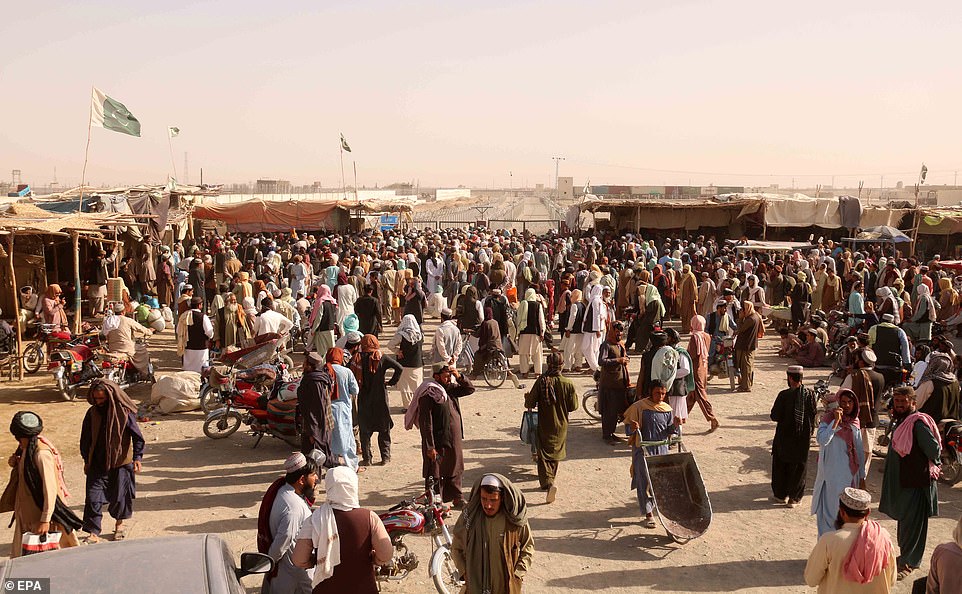 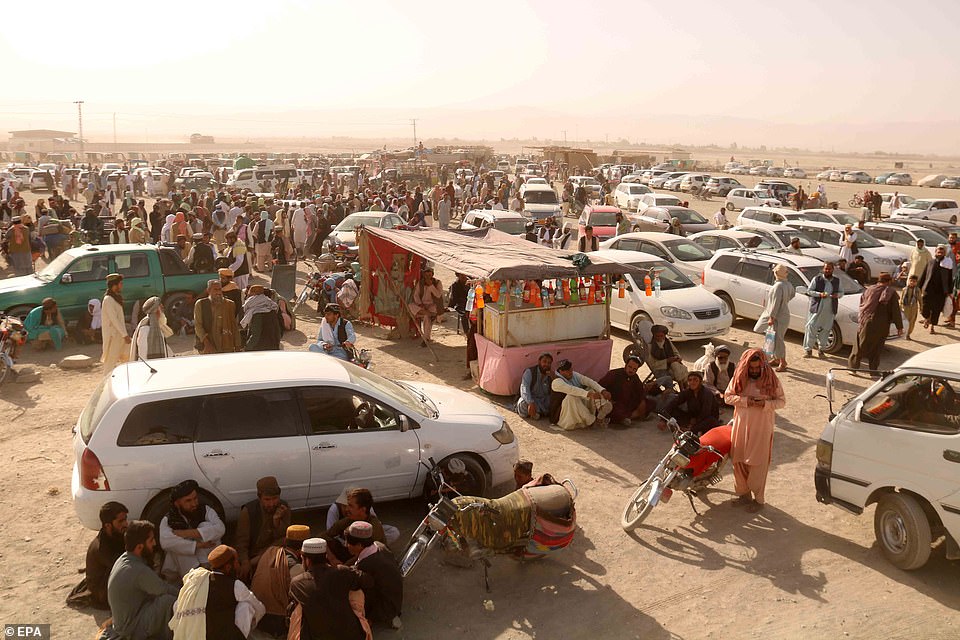 Both the Taliban and Pakistan have said the border crossing will reopen on August 12, but until then thousands of people looking to cross have been forced to sit and wait 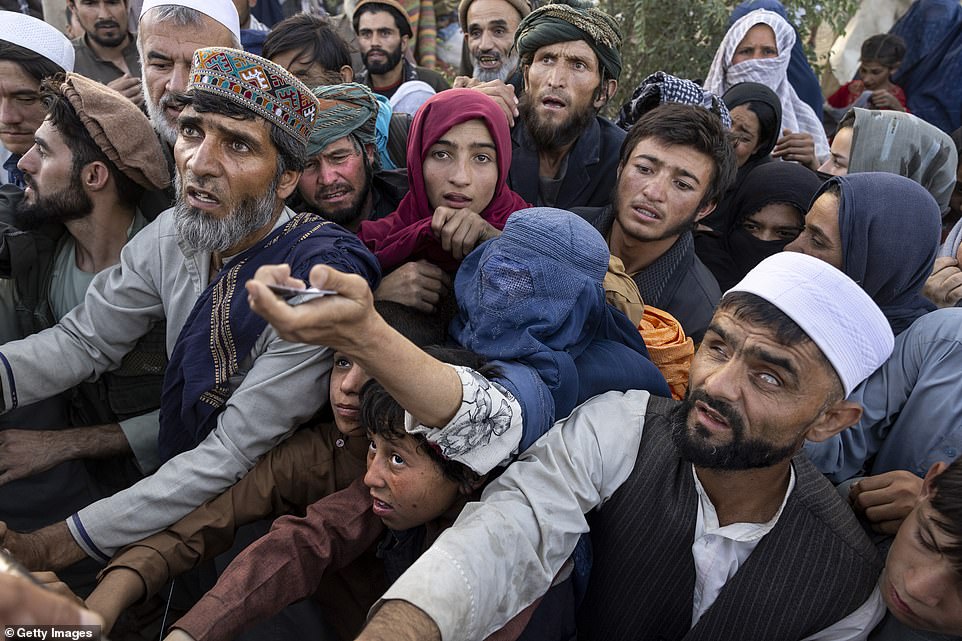 The fighting has sparked an internal refugee crisis, with many civilians fleeing Afghanistan’s regions to the capital Kabul (pictured) in the hopes of being protected from the Taliban 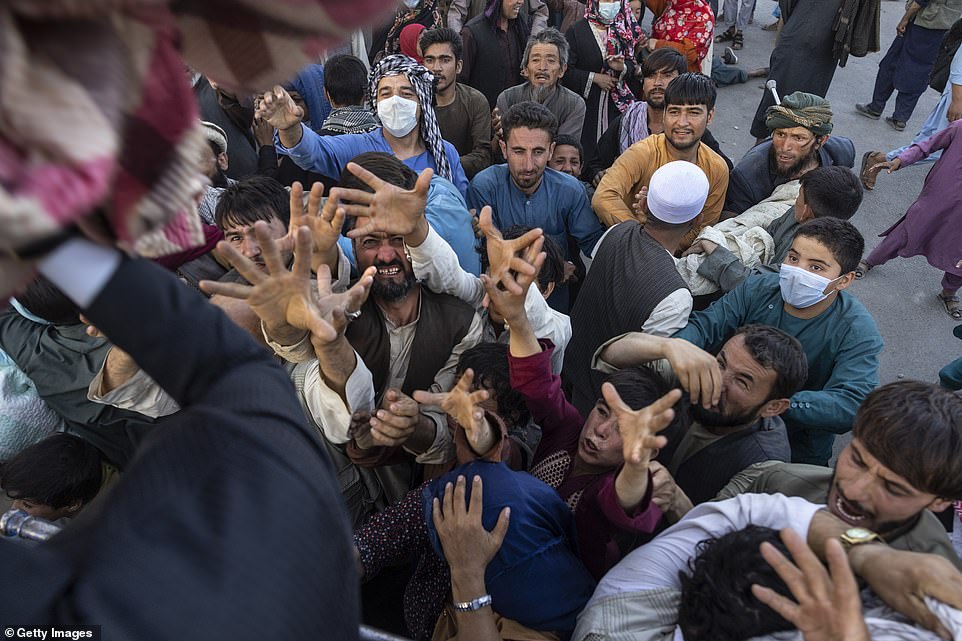 Displaced Afghans reach out for aid from a local Muslim organization at a makeshift IDP camp in Kabul, 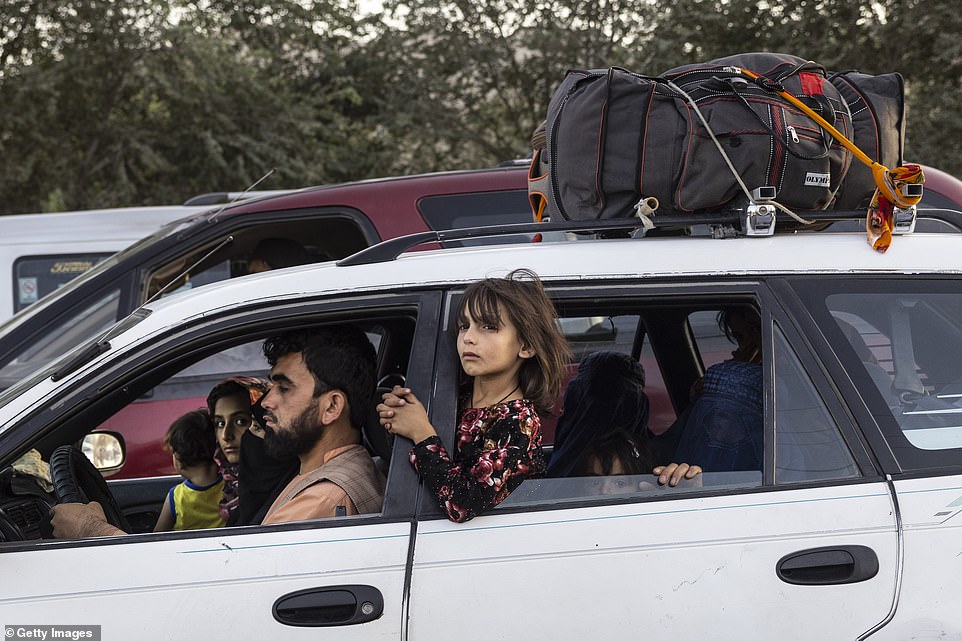 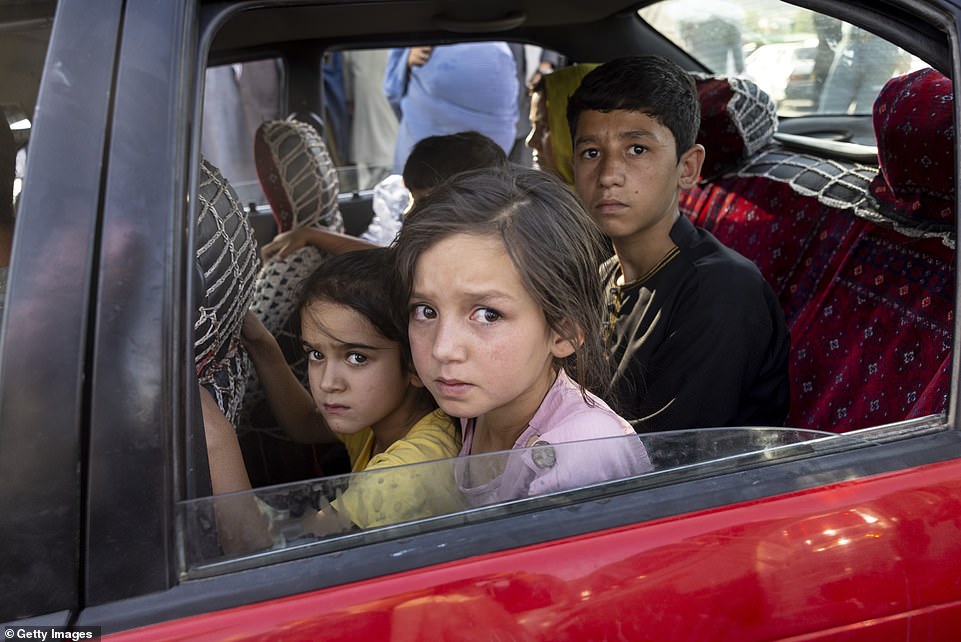 Hundreds of thousands of Afghanis have been displaced from their homes in recent weeks by fighting, with fears that could swell to millions if entire country falls (pictured) 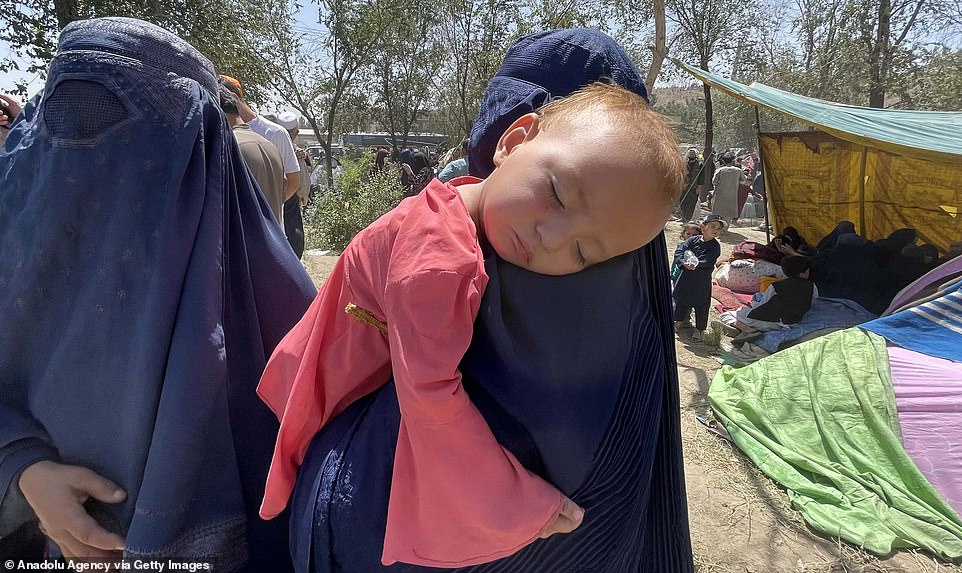 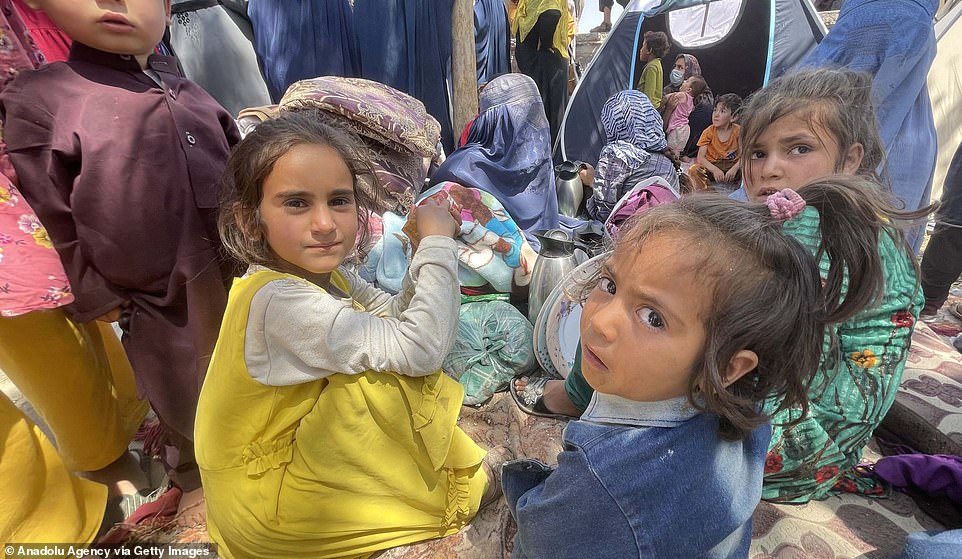 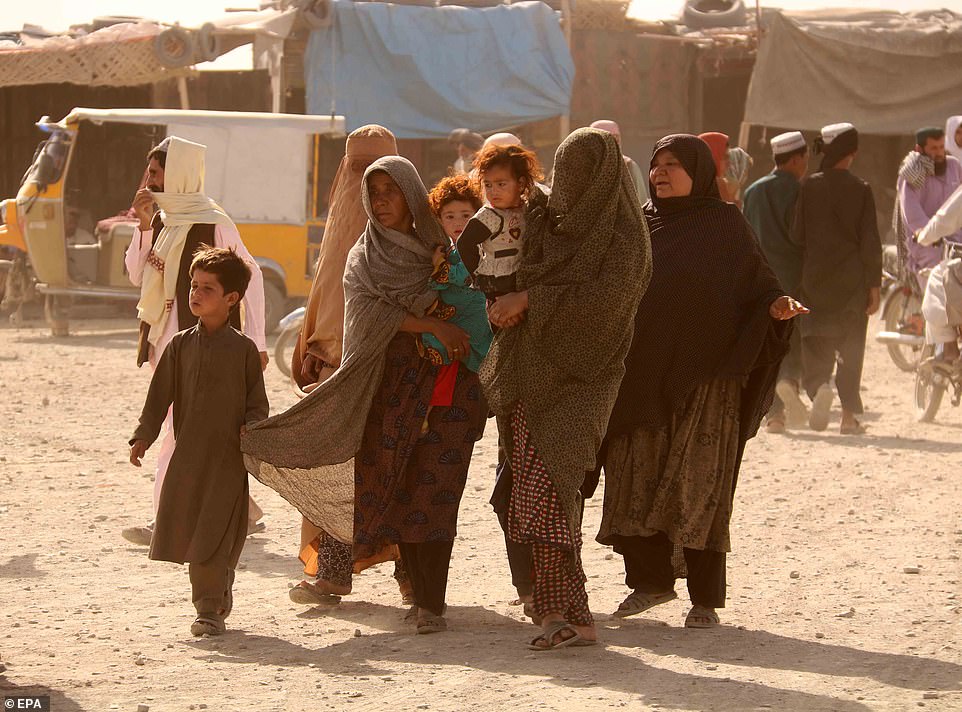 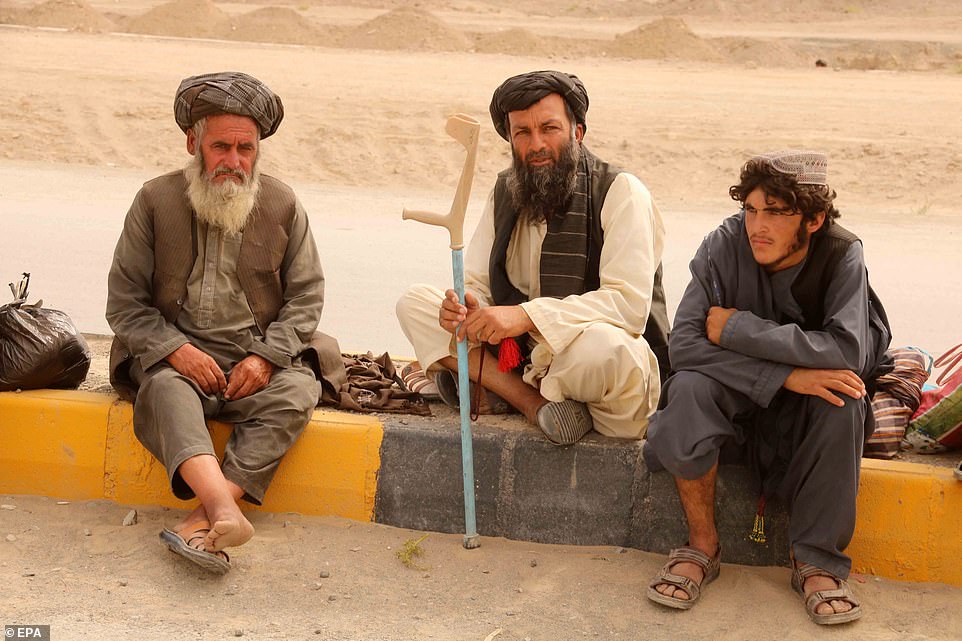 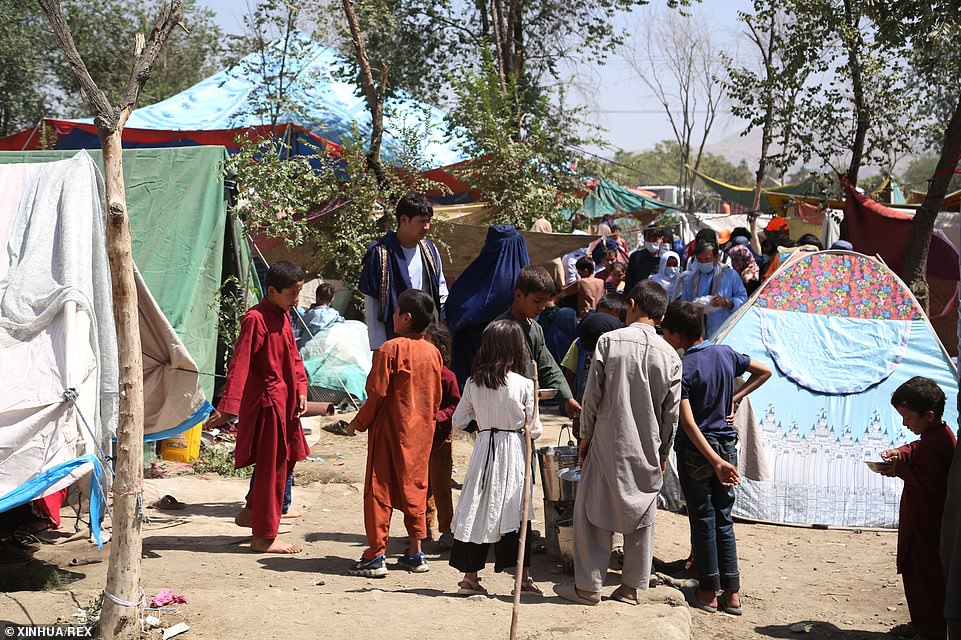 Some 400,000 Afghans have fled their homes since the start of the year, with thousands sheltering in Kabul 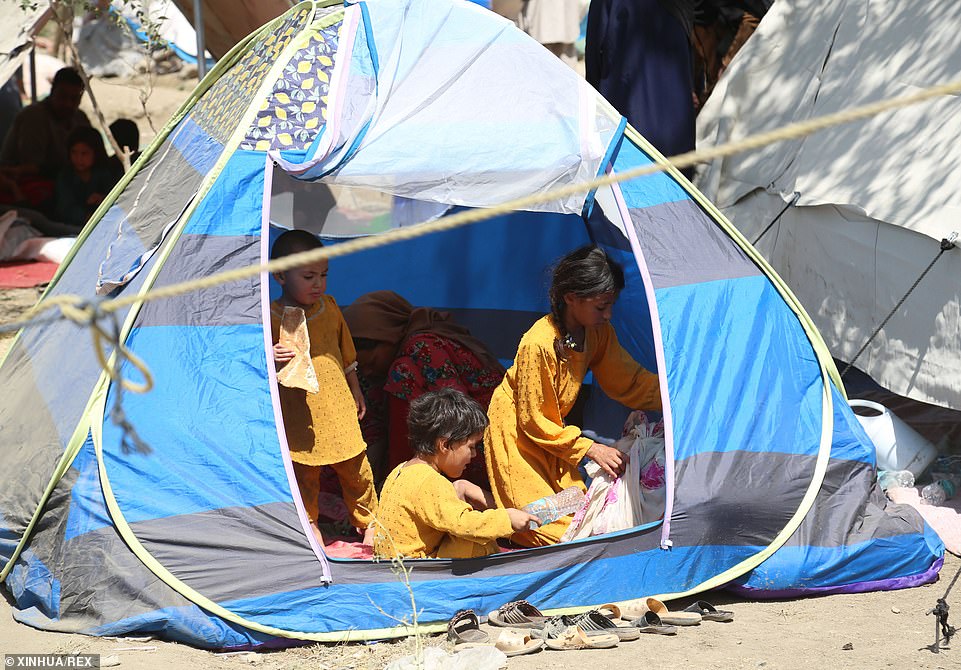 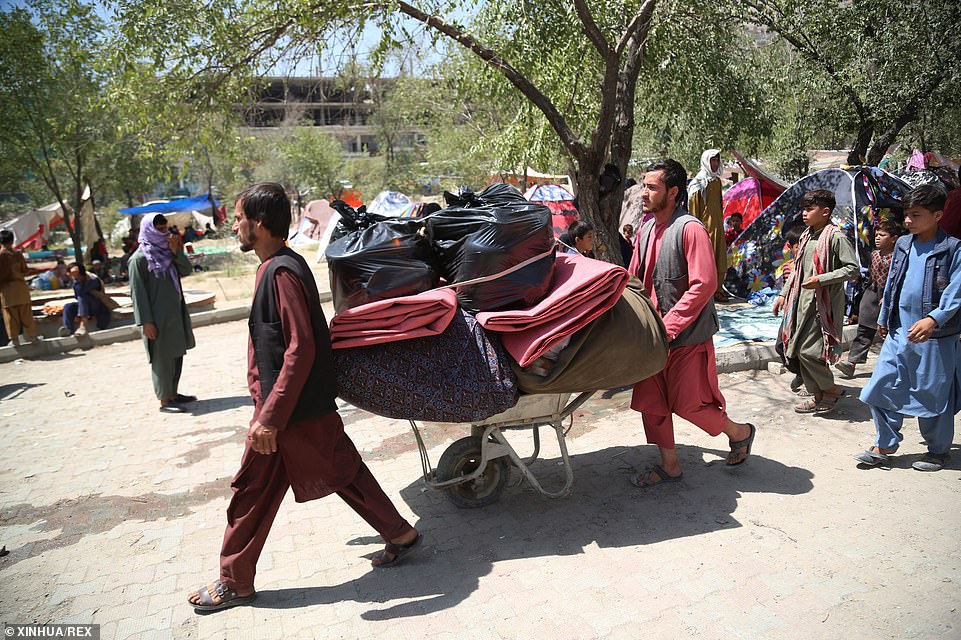 Afghan displaced people who fled from their homes during the fighting carry their belongings in a public park in Kabul
Related Topics:News
Up Next

Six hundred UK paratroopers will be sent to Afghanistan to get Brits out alongside 3,000 US soldiers evacuating Americans as rampant Taliban take both Lashkar Gar and Kandahar