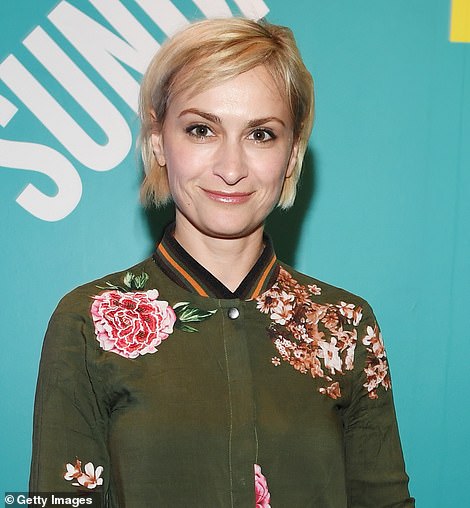 Alec Baldwin has shot and killed a cinematographer on the set of the upcoming Western movie Rust, after a prop firearm he was using in a scene discharged in a tragic accident.

Director of Photography Halyna Hutchins, 42, was fatally struck in the incident on Thursday at the Bonanza Creek Ranch movie set in Santa Fe, New Mexico, where writer-director Joel Souza, 48, was also injured.

Baldwin, 68, was confirmed as the individual who fired the prop gun, which somehow unintentionally launched a projectile or projectiles at the crew members, in a statement from the Santa Fe Sheriff’s Office.

No criminal charges have been filed and the incident remains under investigation, police said.

It was not immediately clear whether the prop gun was somehow loaded with real bullets, or if the gunpowder used in theatrical blanks may have launched debris of some kind from the barrel.

Representatives for Baldwin, Souza, and Rust’s executive producer did not immediately respond to inquiries from DailyMail.com late on Thursday.

Hutchins’ devastated friends were too distraught to talk, but Ariel Vida, a production designer who worked with the director of photography on 2020 film Archenemy confirmed her death to DailyMail.com, tearfully adding: ‘I’m sorry, I can’t talk about this right now.’ 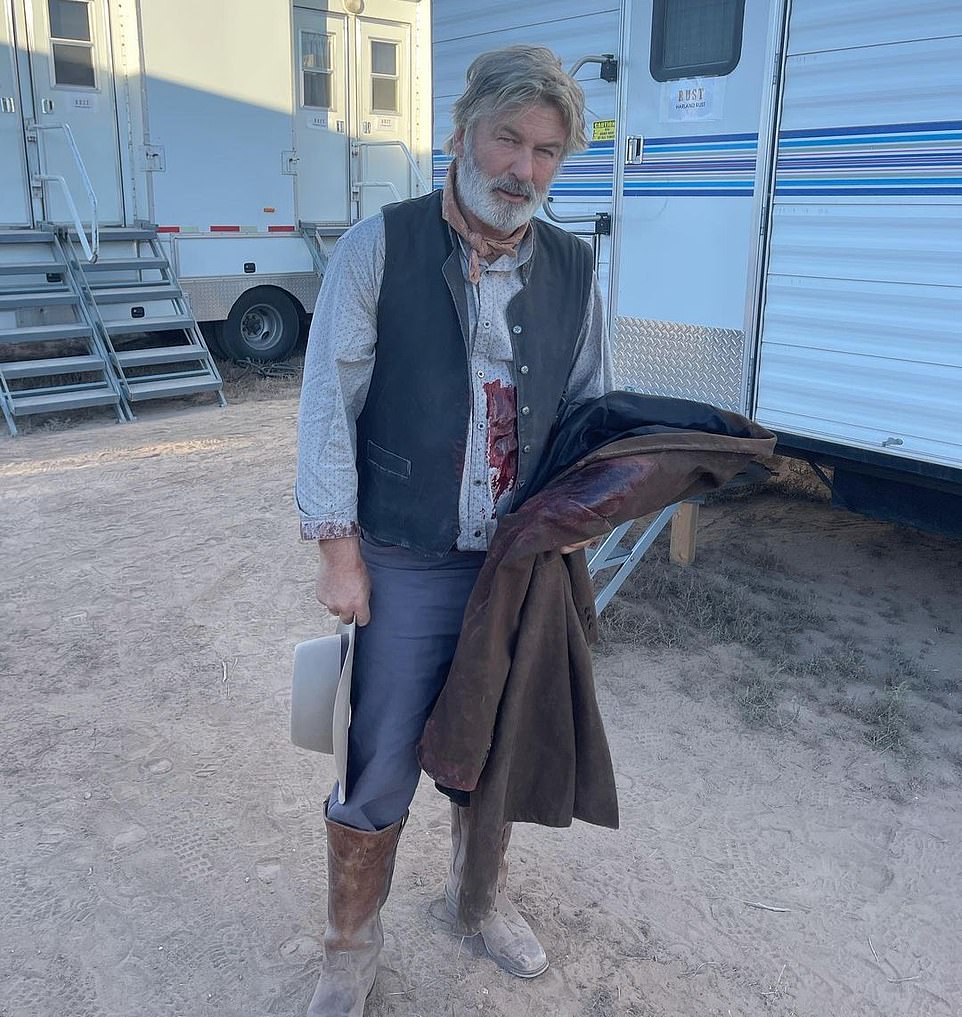 Alec Baldwin is seen on the set of Rust with fake blood earlier Thursday, hours before he shot someone. Filming was halted hours later following the fatal incident at the Bonanza Creek Ranch movie set in Santa Fe 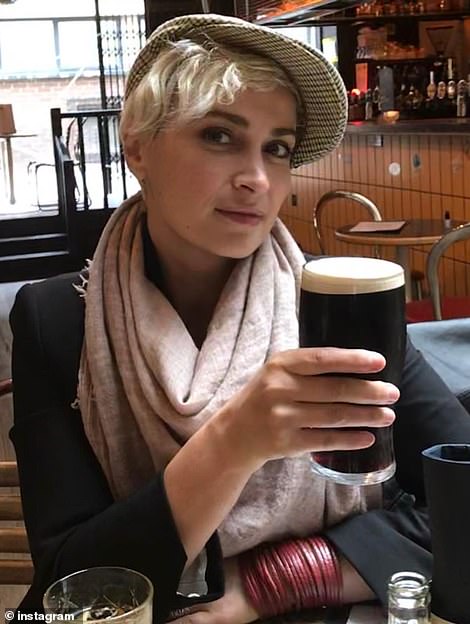 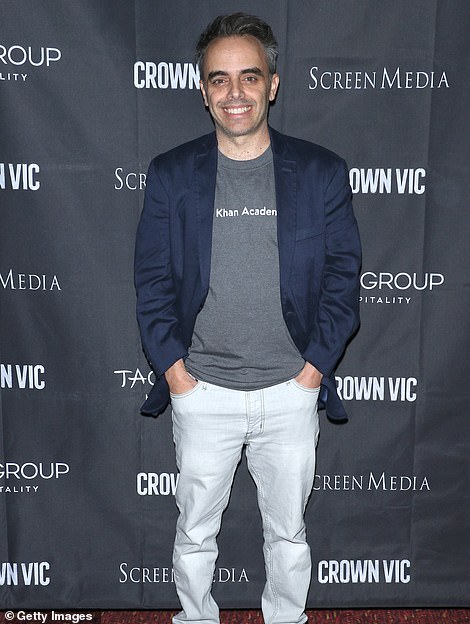 Hutchins, 42, (left) was fatally struck in the incident on Thursday at the Bonanza Creek Ranch movie set in Santa Fe, New Mexico, where writer-director Joel Souza, 48, (right) was also injured 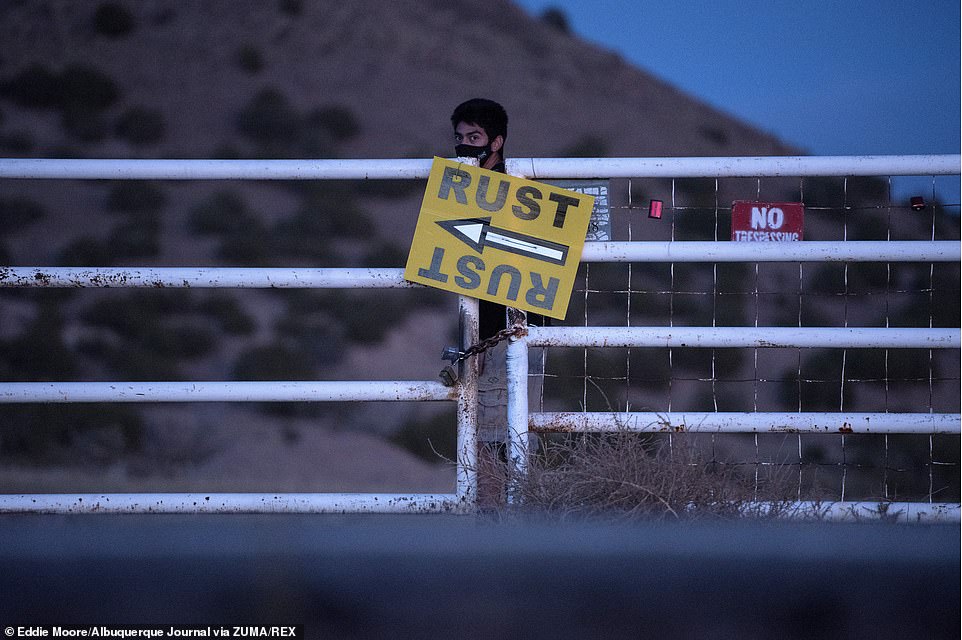 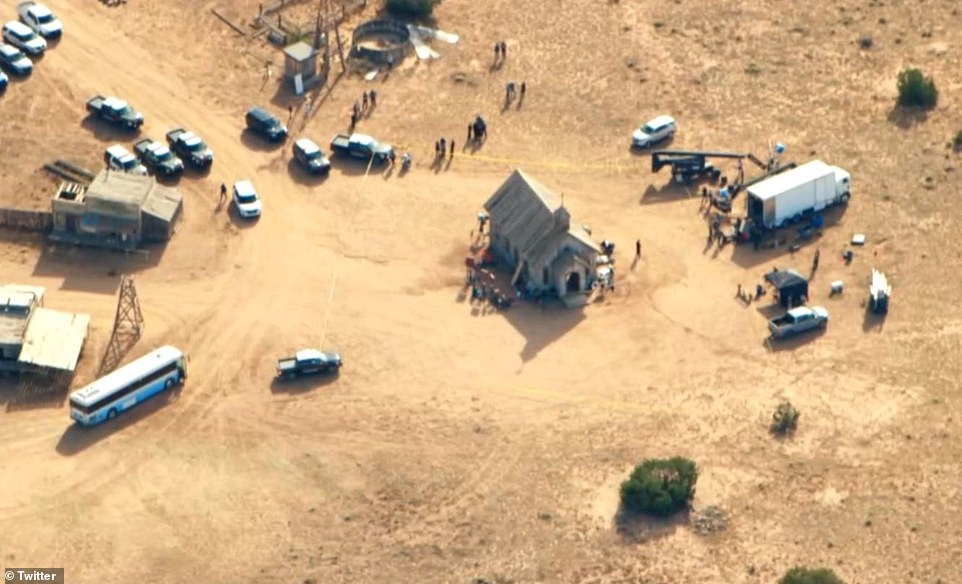 A crewmember has been killed on the set (above) of the upcoming Western movie Rust, starring Alec Baldwin, after a prop firearm discharged in a tragic accident

Friends took to Hutchins’ Instagram page to leave tributes underneath a video filmed two days ago that showed her riding a horse on her day off.

James Cullen wrote: ‘I will miss you my friend. This is devastating.’

Another friend Jack Caswell added: ‘I feel like I’ve had the wind knocked out of me. You will be so missed’ while Tina Presley Borek said: ‘Heartbroken.’

Hutchins, who lived in Venice Beach, California, was considered one of Hollywood’s rising stars – named in a list of cinematographers to watch in 2019 by American Cinematographer.

The daughter of a soldier, Hutchins grew up on a Soviet military base in the Arctic Circle before going to college in Ukrainian capital Kiev.

She later moved first to the U.K. to work on documentary filmmaking before traveling to LA to study for a master’s degree in cinematography and switching to movies.

Her credits include horror film Darlin and, shortly before starting work on Rust, she had completed filming on Blindfire – a crime drama starring Brian Geraghty and Sharon Leal. 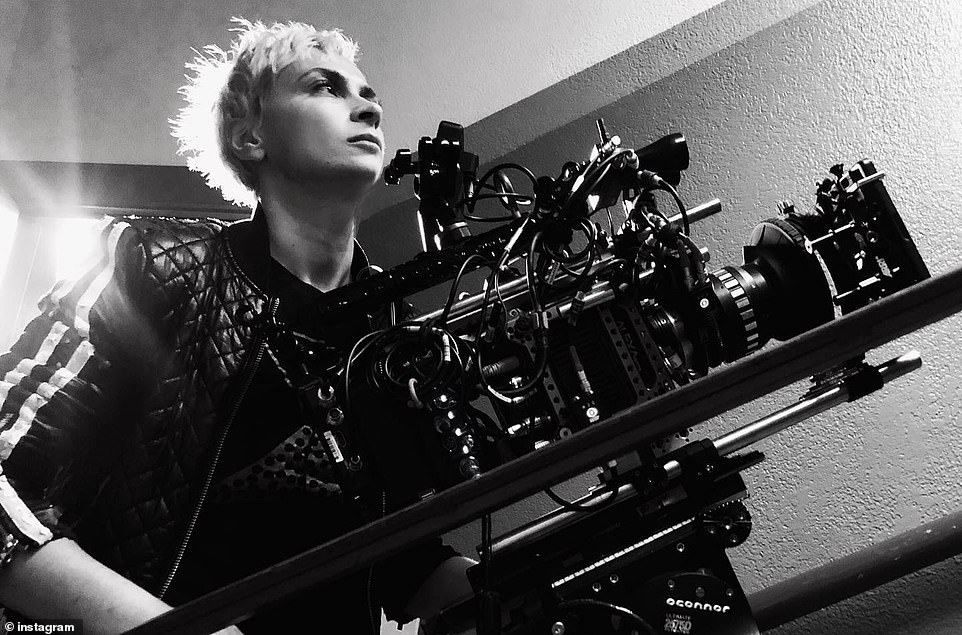 Hutchins, who lived in Venice Beach, California, was considered one of Hollywood’s rising stars – named in a list of cinematographers to watch in 2019 by American Cinematographer 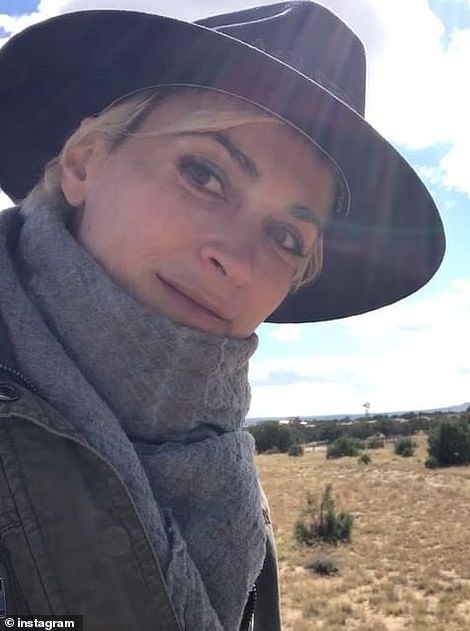 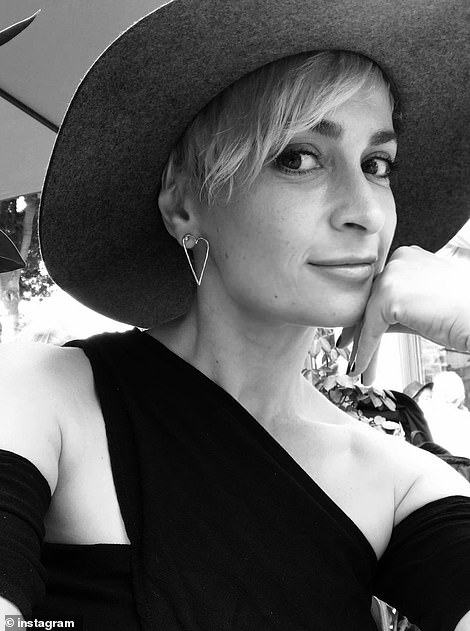 She later moved first to the U.K. to work on documentary filmmaking before traveling to LA to study for a master’s degree in cinematography and switching to movies

The Santa Fe Sheriff’s Office says it responded to the movie set at around 1.50pm after a 911 caller indicated someone had been shot in the arm.

‘According to investigators, it appears that the scene being filmed involved the use of a prop firearm when it was discharged,’ the sheriff’s office said in a statement.

‘Detectives are investigating how and what type of projectile was discharged,’ the statement added.

Police said that a 42-year-old female was airlifted to University of New Mexico Hospital, where she was pronounced dead.

A 42-year-old man was rushed by ambulance to Cristus St. Vincent’s Hospital where he is being treated for injuries, and is expected to survive.

‘There was an accident today on the New Mexico set of Rust involving the misfire of a prop gun with blanks,’ read a statement from Rust Movie Productions LLC.

‘Two crew members have been taken to the hospital and are receiving care. Production has been halted for the time being. The safety of our cast and crew remains our top priority,’ the statement concluded.

The Santa Fe Sheriff’s Department confirmed to Deadline that the incident was being investigated, with criminal investigators on the scene.

There is no indication that there was any criminal activity involving the incident, given the production company’s statement. 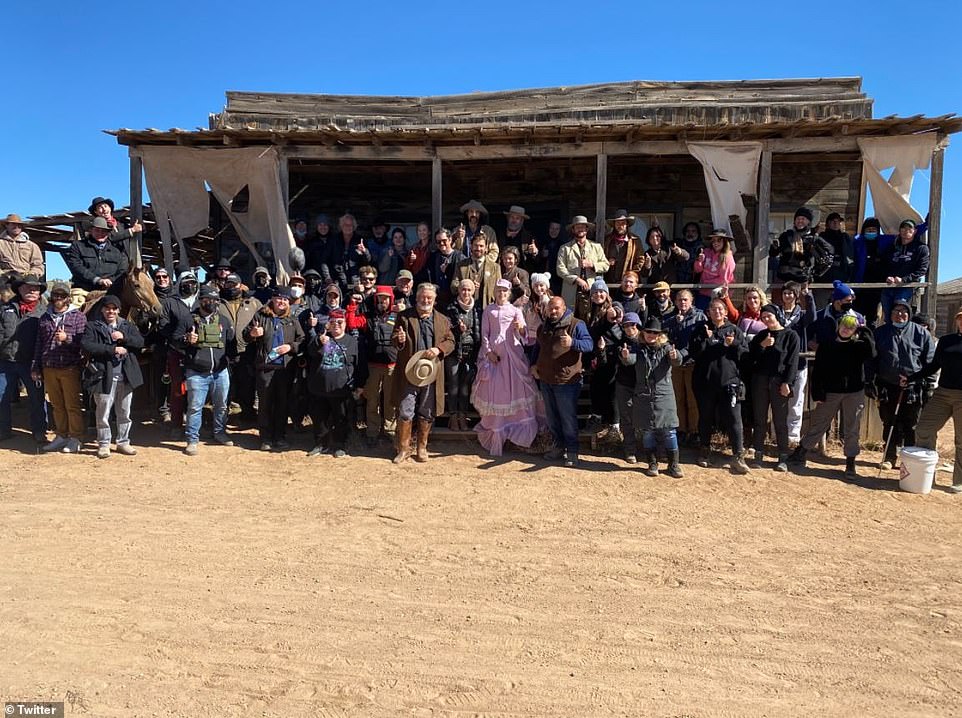 Cast members are seen on set during the filming of Rust. Alec Baldwin was filming a scene that involved a prop gun being fired, and a misfire from the gun has killed a crew member 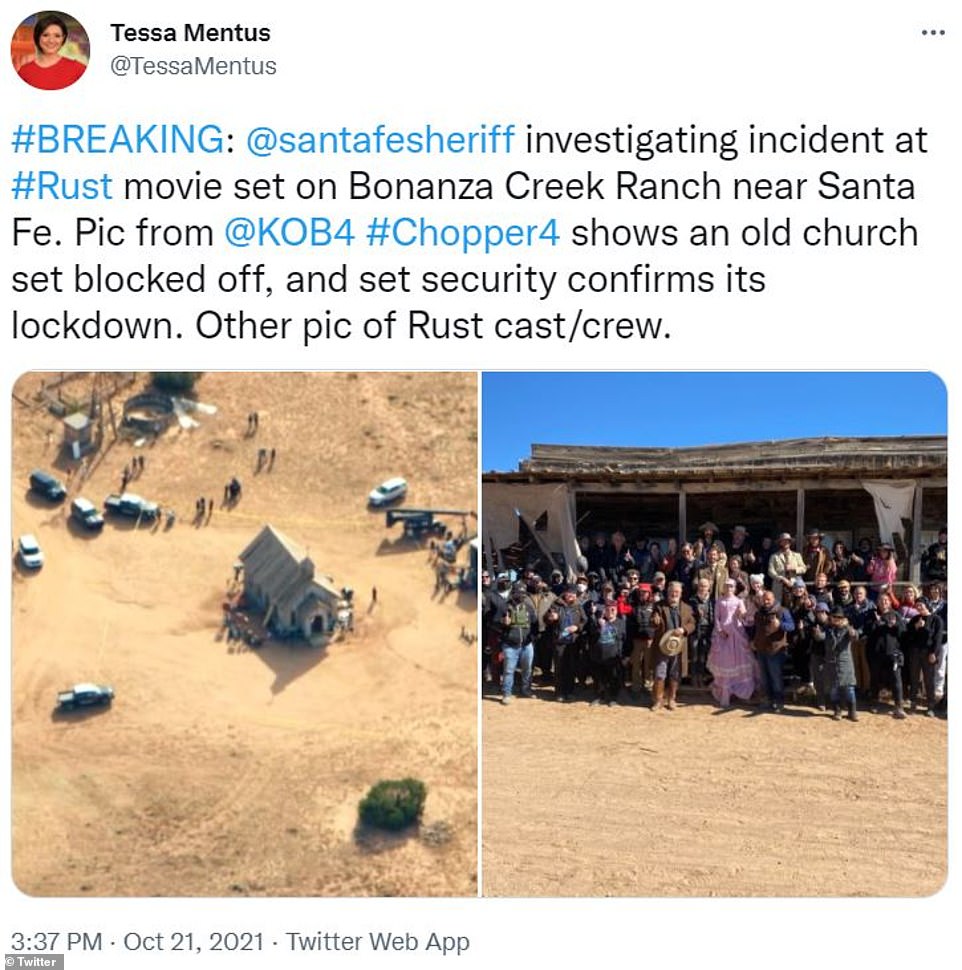 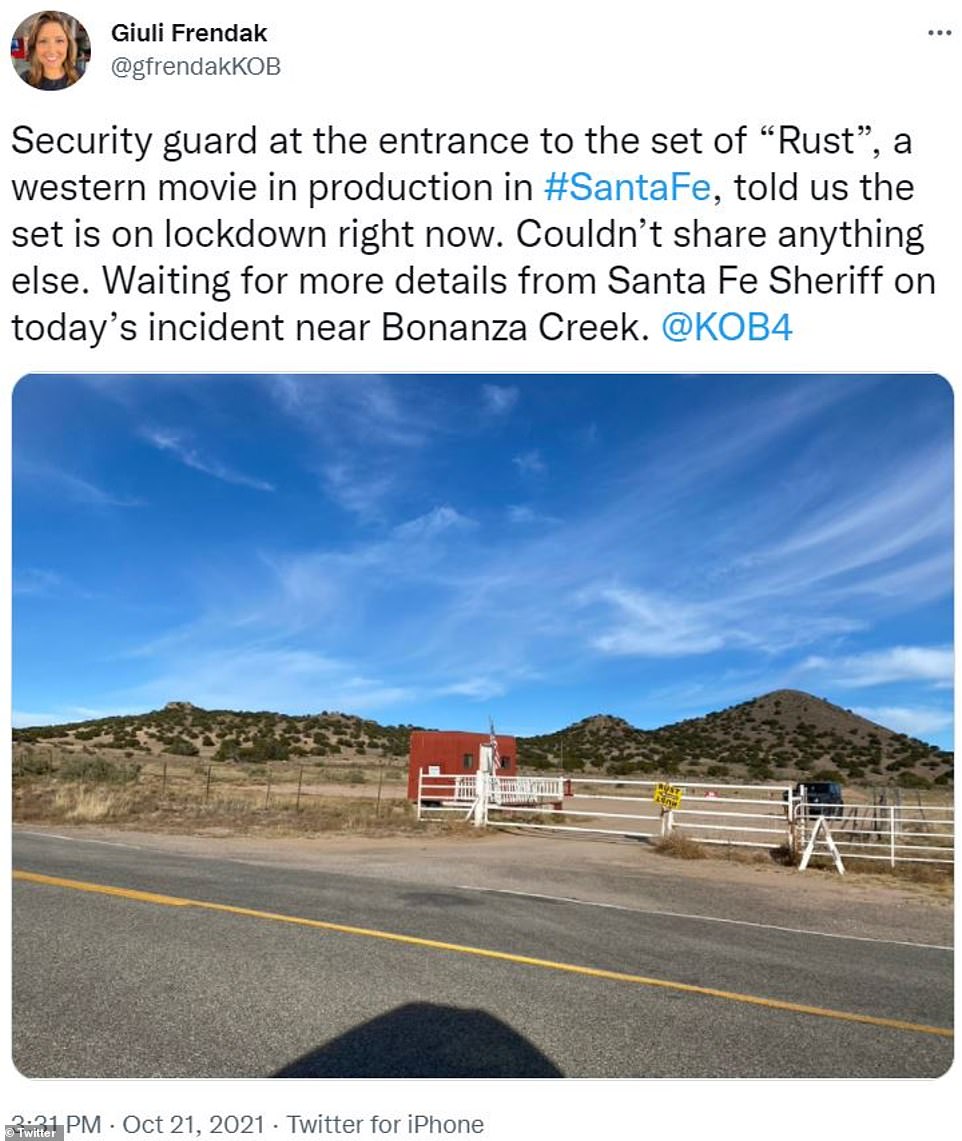 Another KOB 4 reporter, Giuli Frendak, shared a photo of a security gate, adding, ‘Security guard at the entrance to the set of Rust”, a western movie in production in #SantaFe, told us the set is on lockdown right now. Couldn’t share anything else. Waiting for more details from Santa Fe Sheriff on today’s incident near Bonanza Creek.’

A new report from TMZ reveals details about the incident, which revealed Alec Baldwin was filming a scene that involved a gun being fired.

The gun was supposed to be loaded with blanks, but when the gun fired, ‘either shrapnel or a bullet hit two people on the set,’ one of whom needed to be airlifted to the hospital.

While it’s unclear what was loaded into the gun, the two people who were hit were writer-director Joel Souza, who was reportedly hit in the clavicle, and the director of photography, Halyna Hutchins, who was rushed to the hospital via helicopter, according to TMZ.

Baldwin was not injured in the incident, with production shut down for the day after the incident.

Rust, which Souza also wrote the screenplay for, is set in 1880s Kansas, following a young boy who goes on the run with his grandfather after the accidental killing of a local rancher. 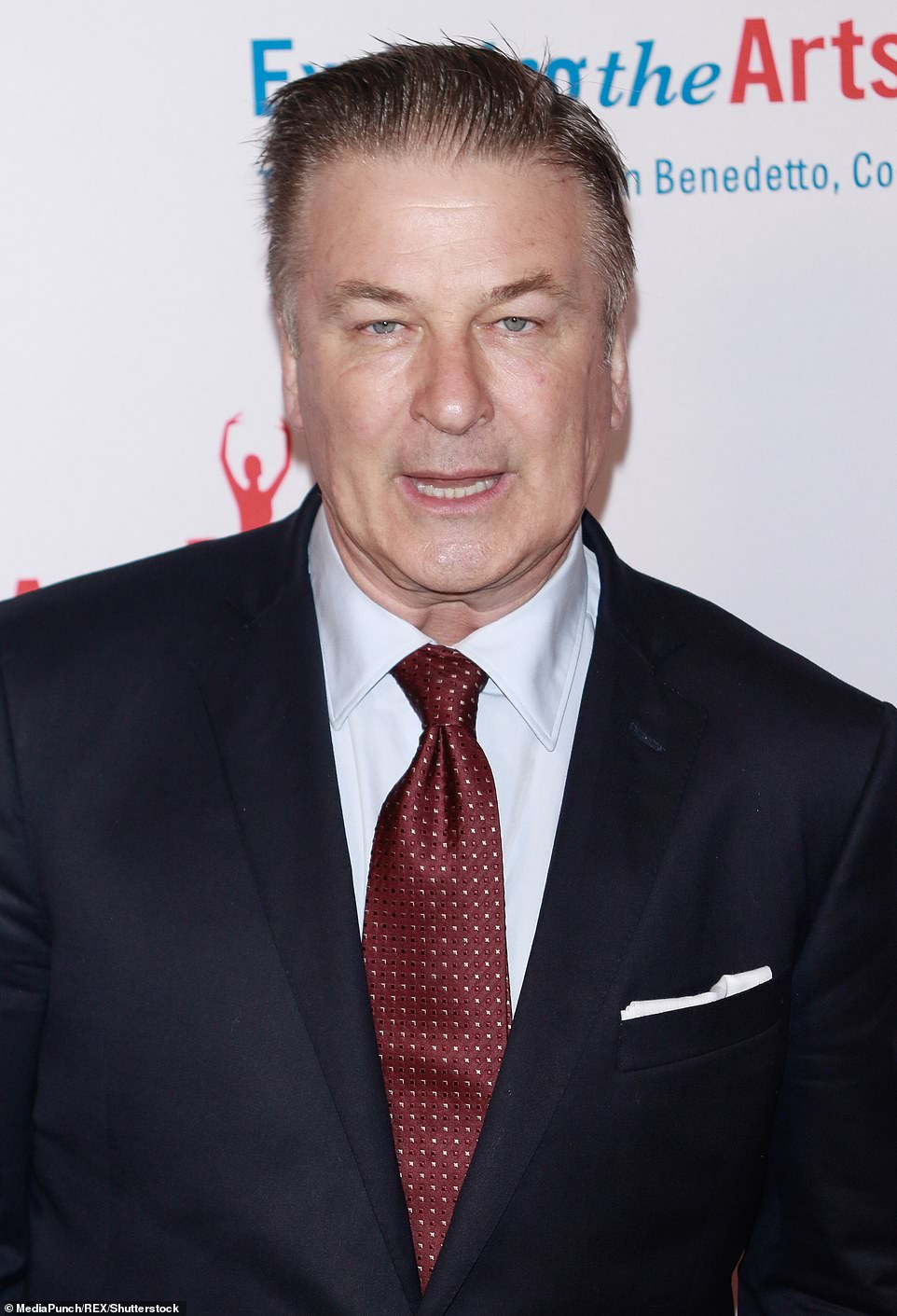 Alec: Baldwin was not injured in the incident, with production shut down for the day after the incident

ULEZ extension: Three in five drivers in and around London are unaware of changes