Colin Powell, the Harlem-born son of Jamaican immigrants who was awarded military honors for saving fellow soldiers from a burning helicopter crash in Vietnam and went on to become the first black Secretary of State, has died at age 84.

The former Secretary of State and Chairman of the Joint Chiefs was fully vaccinated but died of COVID-19 complications, his family announced on Facebook.

He had previously been diagnosed with multiple myeloma, a type of blood cancer that impacts the body’s ability to fight infections. Powell also suffered from Parkinson’s and underwent surgery for prostate cancer in 2003.

He was born in New York on April 5, 1937 to Luther and Maude Powell, who arrived in Philadelphia on a ‘banana boat’ steamer from Jamaica in the 1920s.

Powell spent his youth being educated in the New York City public school system through college, when a military career first attracted his attention.

A larger-than-life figure across global community, Powell rose from modest means to oversee some of the most significant foreign policy shifts across the late 20th and early 21st centuries.

The retired four-star general’s decades-long legacy was marred by a 2003 speech to the United Nations Security Council in which he claimed Iraq possessed weapons of mass destruction.

Using information that was later proven false, the then-Secretary of State used the purported evidence to justify the US invasion of Iraq. He stepped down from his position at the end of Bush’s first term.

Powell told ABC in 2005 he regarded the speech as a ‘blot’ that will ‘always be a part of my record,’ adding ‘It was painful. It’s painful now.’

But the former chief diplomat was highly regarded across multiple administrations beginning as a White House Fellow under Richard Nixon. 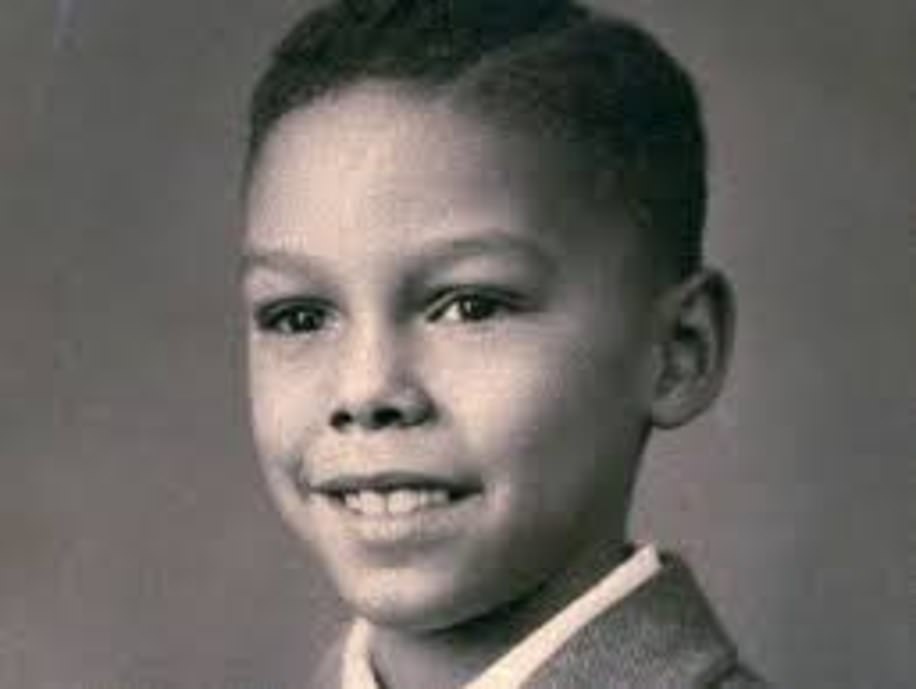 Powell was born in Harlem, New York to Jamaican immigrant parents in 1937. His mother and father arrived in Philadelphia on a ‘banana boat’ from the Caribbean island in the 1920s 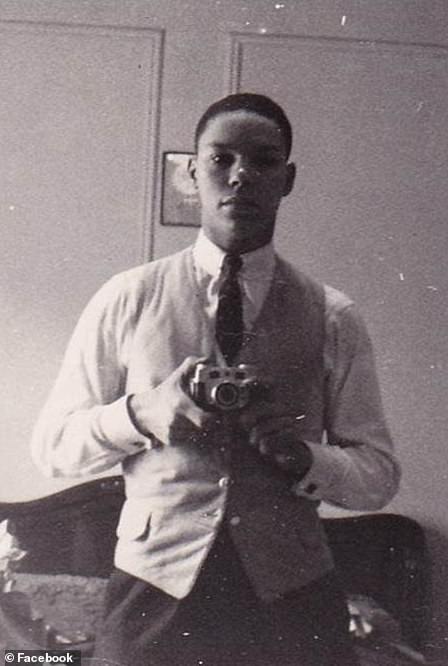 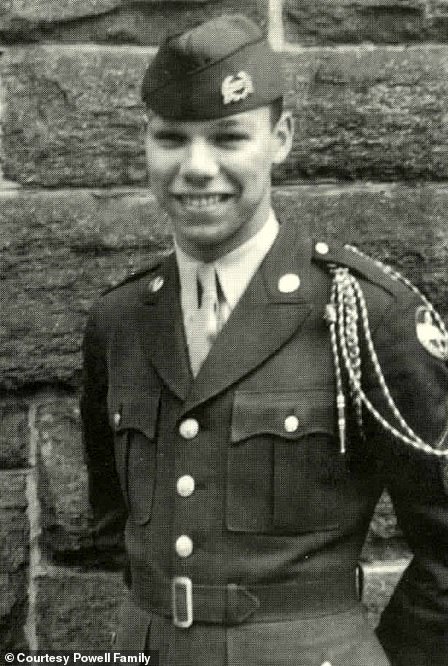 Powell posted this photo of himself from the 1950s on Facebook. He spent much of his early years in the South Bronx

Along with his many military honors he also earned the Presidential Medal of Freedom twice, the Congressional Gold Medal and an award from the NAACP.

‘Many Presidents relied on General Powell’s counsel and experience,’ George W. Bush wrote in a statement on Powell’s death. ‘He was highly respected at home and abroad. And most important, Colin was a family man and a friend. Laura and I send Alma and their children our sincere condolences as they remember the life of a great man.’

Powell grew up in the South Bronx and graduated from Morris High School in 1954.

His parents referred to him as ‘Chal-in’, the British pronunciation Jamaicans used, when he was growing up. But kids on the street started calling him ‘Coh-lin’ in honor of the hero Second World War fighter pilot Colin Kelly Jr, who died fighting the Japanese navy in the days after Pearl Harbor. 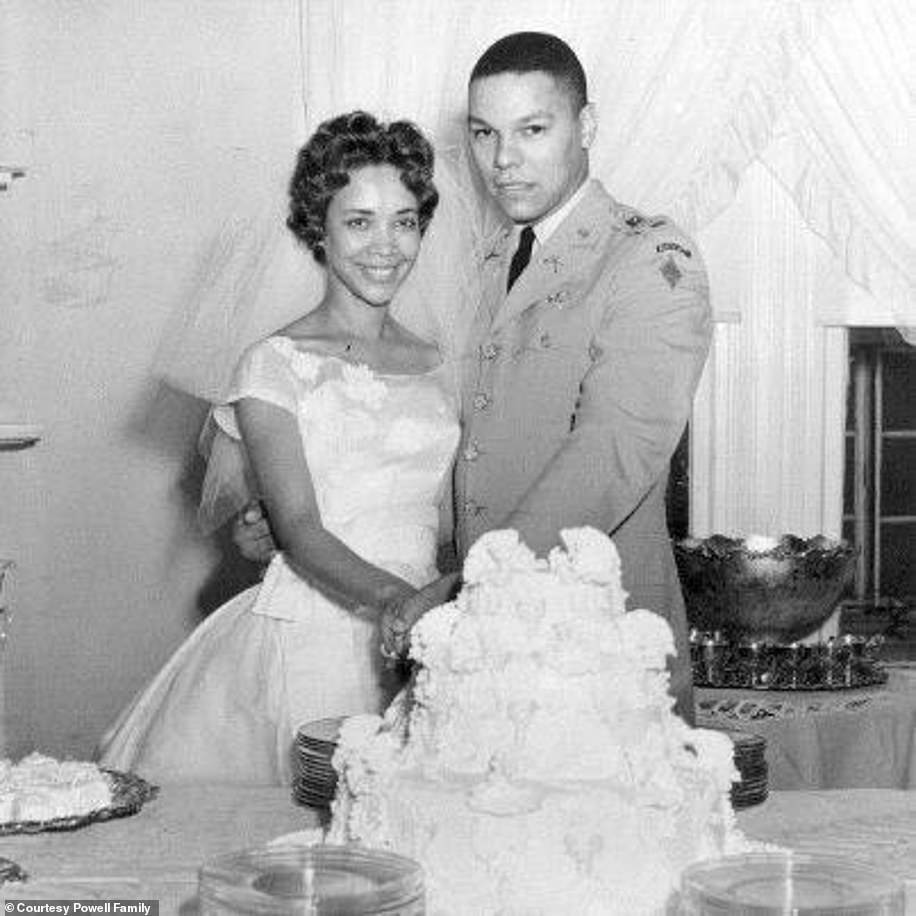 Powell met his wife, Alma Johnson, while stationed in Massachusetts and married her in 1962 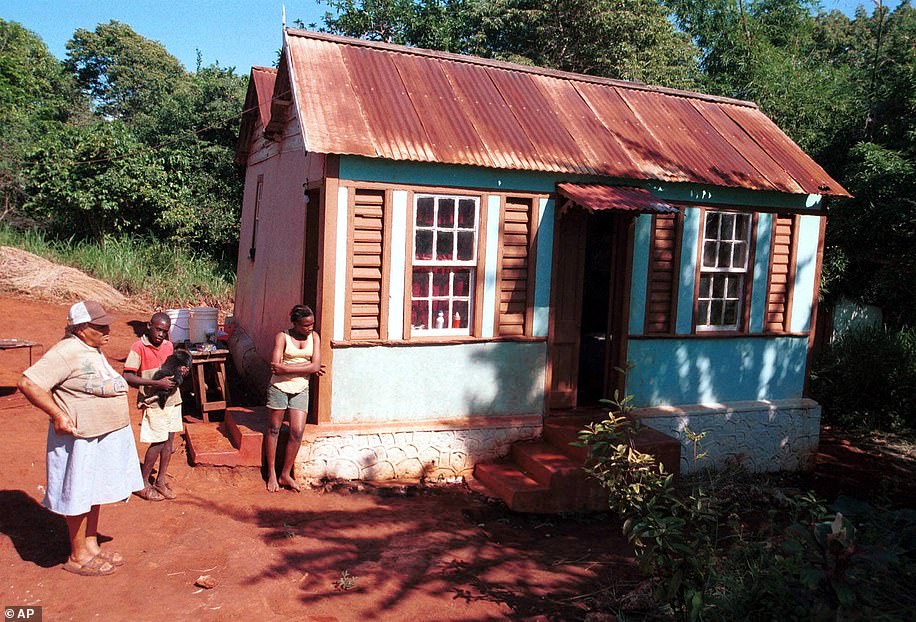 Cousin of U.S. Secretary of State Colin Powell, Muriel Meggie, foreground, talks about the house that was a home of Powell’s father in Top Hill, Jamaica in this Dec. 17, 2000 file photo

He joined the Reserve Officers’ Training Corps (ROTC) while at the City College of New York, where he was studying to earn a Bachelor of Science in Geology.

Along with earning his degree Powell graduated college in 1958 as a second lieutenant in the US Army.

That led to a 35-year career in the Army, including leading the Joint Chiefs of Staff under George H.W. Bush and Bill Clinton.

While stationed at Fort Devens, Massachusetts, Powell met his wife Alma Johnson. They married in 1962 and went on to have two daughters and a son.

Powell’s overseas service began in Vietnam that same year, where he was sent by John F. Kennedy to train South Vietnamese forces.

He was injured soon after in 1963 when he stepped on a booby trapped stake while on patrol, earning a Purple Heart award.

Powell went back to Vietnam in 1968 for a second tour, where he famously escaped a helicopter crash and returned to the burning wreckage multiple times to rescue his fellow soldiers. 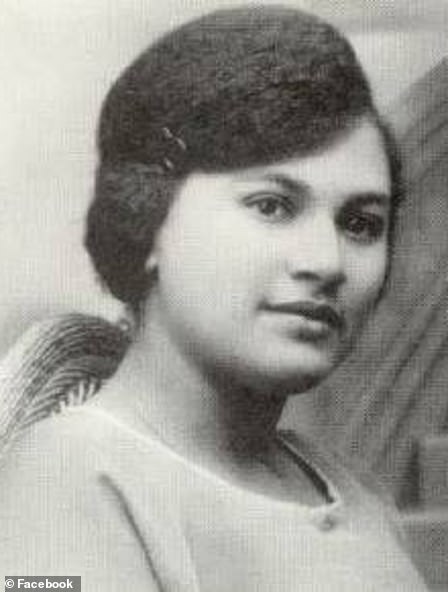 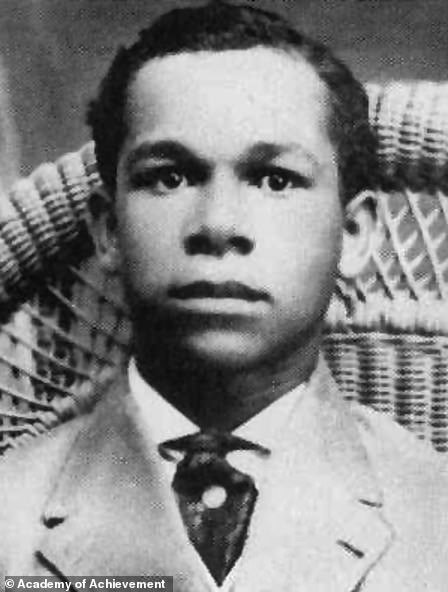 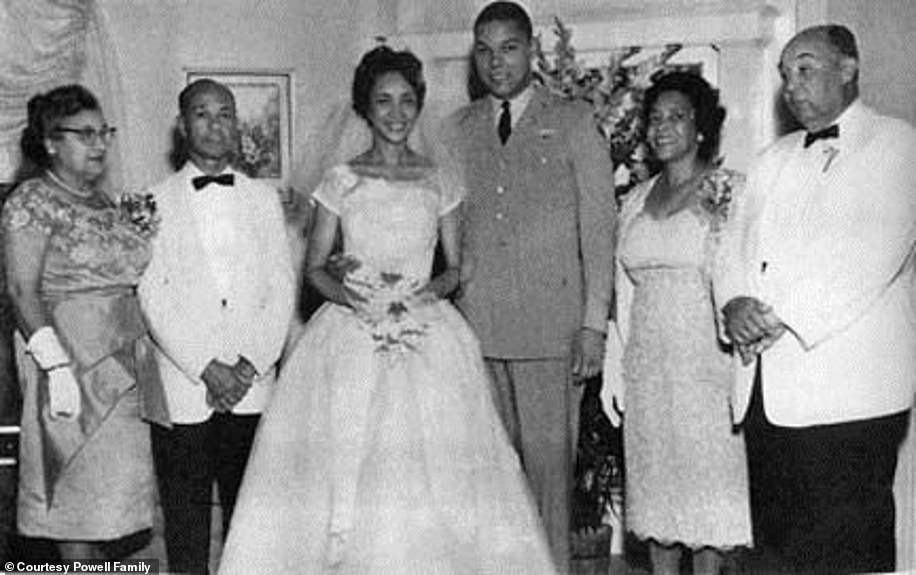 Pictured are the bride’s parents, Alma and Colin Powell, and Powell’s parents Luther and Maude

‘Get mad, then get over it’: Colin Powell’s ’13 Rules’ that he used to guide his personal and professional life

1. It ain’t as bad as you think. It will look better in the morning.

5. Be careful what you choose.

6. Don’t let adverse facts stand in the way of a good decision.

7. You can’t make someone else’s choices.

12. Don’t take counsel of your fears or naysayers.

13. Perpetual optimism is a force multiplier.

‘With complete disregard for his own safety and while injured himself, Major Powell returned several times to the smoldering aircraft which was in danger of bursting into flames,’ his subsequent Soldier’s Medal commendation read.

But his years in the military were also marked by a controversial probe into the devastating My Lai massacre. In 1968 US troops slaughtered as many as 500 Vietnamese civilians, which the military kept under wraps until 1970 to widespread condemnation.

In Vietnam Powell was assigned to investigate a letter from a soldier that allegedly backed reports of the massacre.

But upon looking into it Powell declared, ‘in direct refutation of this portrayal, relations between American soldiers and the Vietnamese people are excellent.’

He was later accused of covering for the military at a time when the extent of atrocities committed against civilians by US troops wasn’t well known.

Upon his return from Vietnam, Powell worked toward a Masters of Business Administration at George Washington University.

From there Powell embarked on a career in government service when he earned a prestigious White House Fellowship under the Nixon administration in 1972.

After that he returned to active duty from 1973 to 1974  where he commanded a battalion in South Korea.

From 1975 to 1976, Powell attended the National War College. In 1976, Powell was promoted to temporary colonel.

He served in the Democratic Carter administration as an executive assistant in the Energy and Defense Departments. 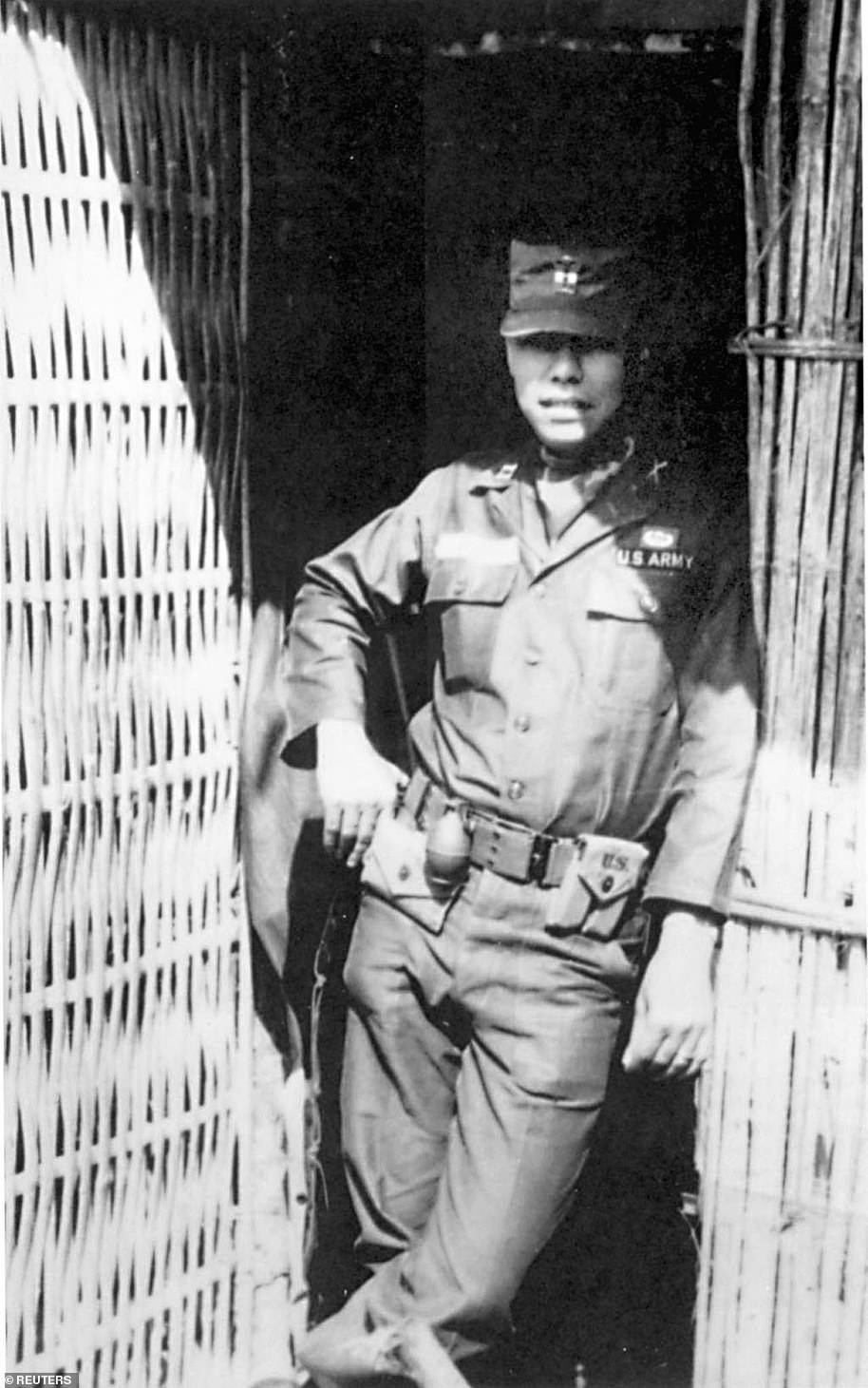 Powell is shown in Vietnam in this 1963 file photo. That same year he was injured by a booby trap for which he earned a Purple Heart 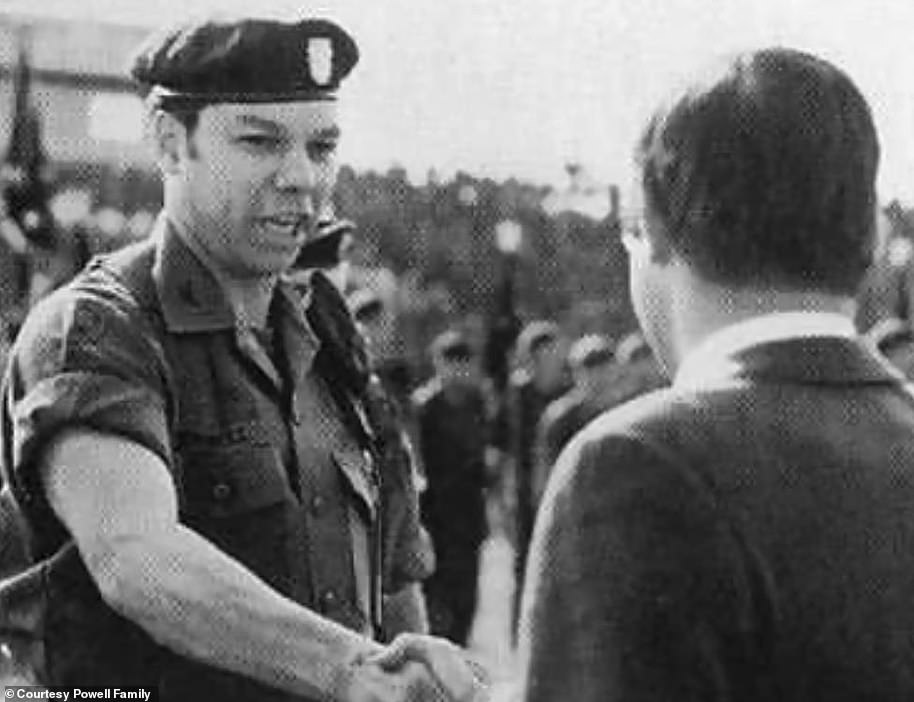 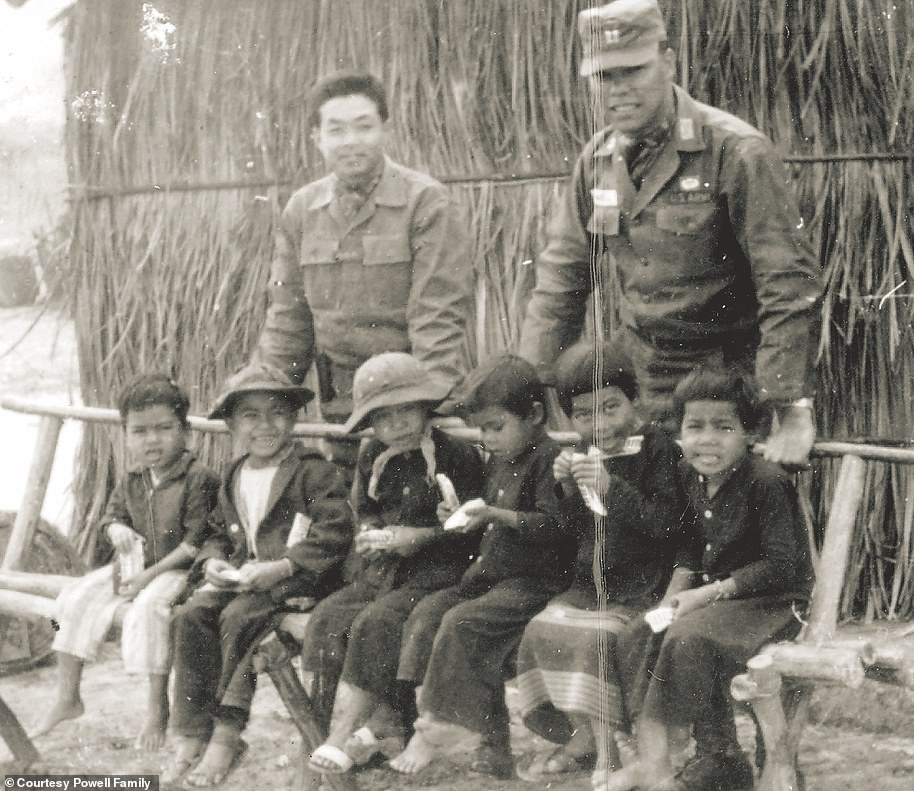 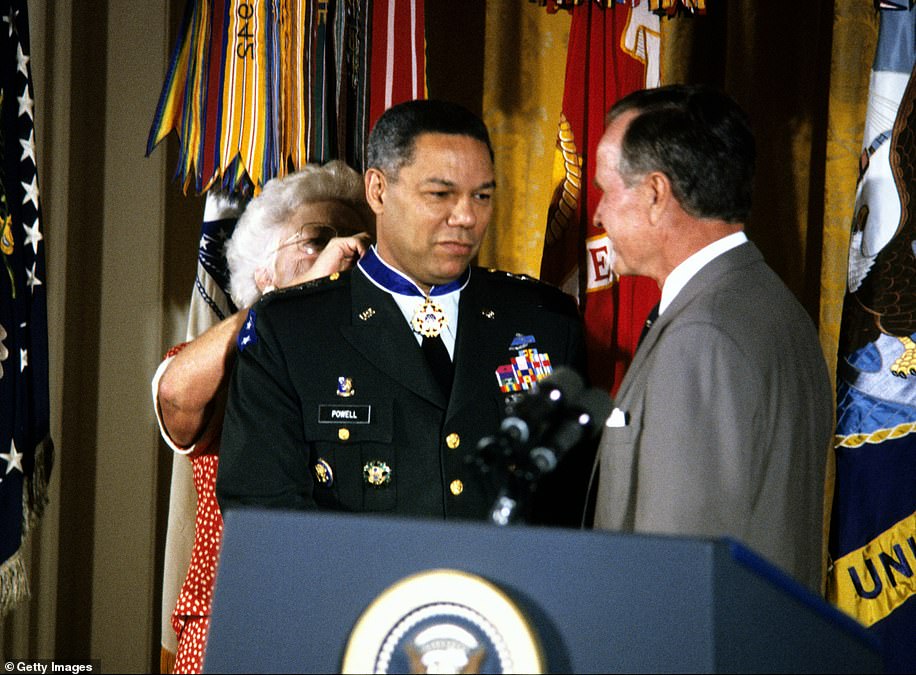 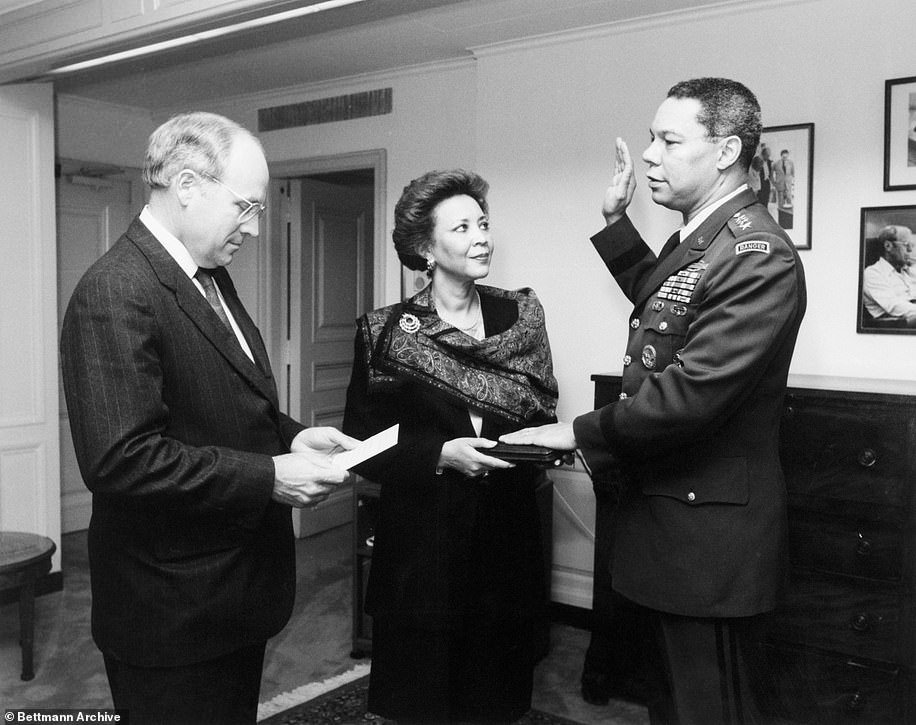 The Powell Doctrine: Eight questions a president must ask themselves before taking military action

Powell worked his way up the military chain of command for years until Reagan appointed him his national security adviser in 1987.

His Army service culminated in George H.W. Bush naming Powell as the first black person to serve as Chairman of the Joint Chiefs of Staff in 1989, where he was confirmed unanimously.

Powell’s first big test came soon after he took office when the Gulf War began in 1990. As the nation’s highest-ranking military adviser he guided US forces through Operation Desert Storm.

The US’s successful Middle East campaign had then received rare public praise for the government’s handling of a conflict and earned Powell a parade in his hometown of New York.

The military code he guided by was dubbed the ‘Powell Doctrine’ in the media.

Powell himself outlined it as a series of eight questions on the national security risks, objectives and public support of any proposed military action.

He stayed on Joint Chiefs job for most of Bill Clinton’s first year in office but clashed with Clinton officials on a number of social and strategic military fronts.