‘This is the world’s moment of truth’: Boris Johnson warns that civilisation could go backwards if Cop26 fails to agree action as he makes plea to ‘keep alive’ dream of combating global warming

By Brendan Carlin and Georgia Edkins For The Mail On Sunday

Boris Johnson yesterday made an impassioned plea to ‘keep alive’ the dream of combating global warming – declaring this week’s climate change summit to be ‘the world’s moment of truth’.

As world leaders gathered in Glasgow, the Prime Minister raised fears of civilisation ‘going backwards’ unless they came together to agree decisive action.

But Mr Johnson also played down hopes of success at the COP26 UN climate change summit, which gets under way today.

Speaking at the G20 meeting in Rome, the PM – who last month rated the chances of an agreement in Glasgow at just ‘six out of ten’ – confessed that the odds were ‘about the same’. 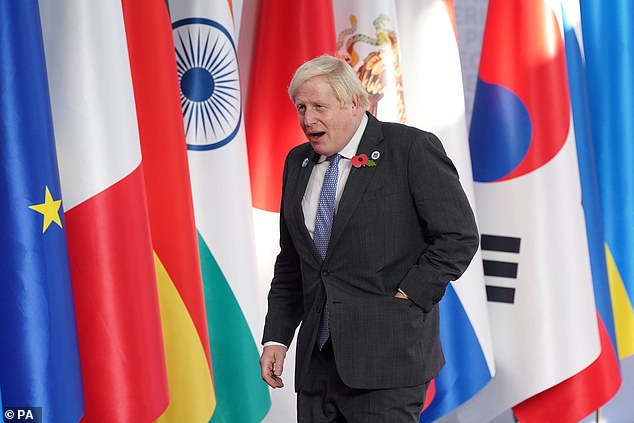 Mr Johnson hailed the importance of the Glasgow event, saying: ‘COP26 will be the world’s moment of truth.

‘The question everyone is asking is whether we seize this moment or let it slip away.’ The PM, who is due to fly from Rome to Scotland this evening, added: ‘Together, we can mark the beginning of the end of climate change – and end the uncertainty once and for all.’

The COP26 gathering, which immediately follows the G20 meeting, has been billed as one of the biggest such events the UK has ever hosted with 25,000 delegates from 196 countries expected to attend.

A vast security operation will protect a host of world leaders amid fears that thousands of eco-activists will descend on the Scottish city, though Insulate Britain protesters said yesterday they were not going.

Mr Johnson’s hopes of a major agreement over the next fortnight have been dented by the decision of Chinese President Xi Jinping and Russian leader Vladimir Putin – key players in any deal to combat global warming – not to attend in person.

COP26 President and Cabinet Minister Alok Sharma appeared to rule out letting the Chinese leader address the summit via video link, telling The Mail on Sunday: ‘Anyone who is not coming is able to provide messages that we will put on the appropriate websites so that people can see those. But the world leaders’ summit is very clearly an event with physical representation and it is for world leaders.’ 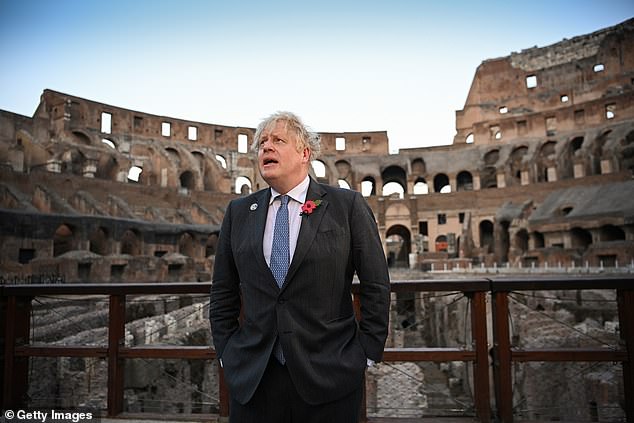 As world leaders gathered in Glasgow, the Prime Minister raised fears of civilisation ‘going backwards’ unless they came together to agree decisive action

In Rome yesterday, a draft communique said G20 countries will step up their efforts to limit global warming to 1.5 degrees Celsius, the level scientists have said is necessary to avoid disaster.

However, critics said there was little in the way of radical new commitments on how to curb harmful emissions. The PM openly admitted yesterday that there was ‘no chance’ of getting a firm agreement this week, telling ITV News: ‘What we could conceivably do – if everyone gets their act together – is we could get an agreement that means that COP26 in Glasgow is a weigh station that allows us to end climate change and allows us to keep alive that dream of restricting the growth to 1.5 degrees.

‘That would make a huge difference to the prospects of humanity.’

The Prince of Wales will make a rare political intervention today to tell world leaders they have an ‘overwhelming responsibility to generations yet unborn’.

Prince Charles will address the G20 meeting in Rome and issue his starkest warning yet on climate change ahead of the COP26 summit in Glasgow.

The heir to the throne is expected to hint at his sympathy for environmental activist Greta Thunberg when he says: ‘It is impossible not to hear the despairing voices of young people who see you as the stewards of the planet, holding the viability of their future in your hands.’

The Archbishop of Canterbury said the outcome of the climate summit would be ‘life or death for millions of people’.

Sir David Attenborough marked the start of the summit by highlighting how re-wilding landscapes could save humanity.

In a short film made by The Wildlife Trusts for COP26, the veteran broadcaster said nature could lock in carbon dioxide and help protect us from extreme weather and flooding.

PETER HITCHENS: Even the Kremlin had more of a conscience than Welby the hypocrite