The fourth husband of Ivana Trump, Italian actor and model, Rossano Rubicondi has died after suffering from ‘an illness’.

News of the 49-year-olds death was announced on Twitter by Italian television presenter, Simona Ventura on Friday evening.

‘Rossano… Thanks for the journey we made together, for the good times and the bad, and also the tears and laughter, so many, and everything that we did together. Farewell. RiP,’ she tweeted.

Although the cause of his death has not been revealed, one Italian publication suggested Rubicondi had been ill for the past year.

The fourth husband of Ivana Trump, Italian actor and model, Rossano Rubicondi has died at 49

In August, Ivana was pictured enjoying a walk with her on-again-off-again partner Rossano Rubicondi, 49 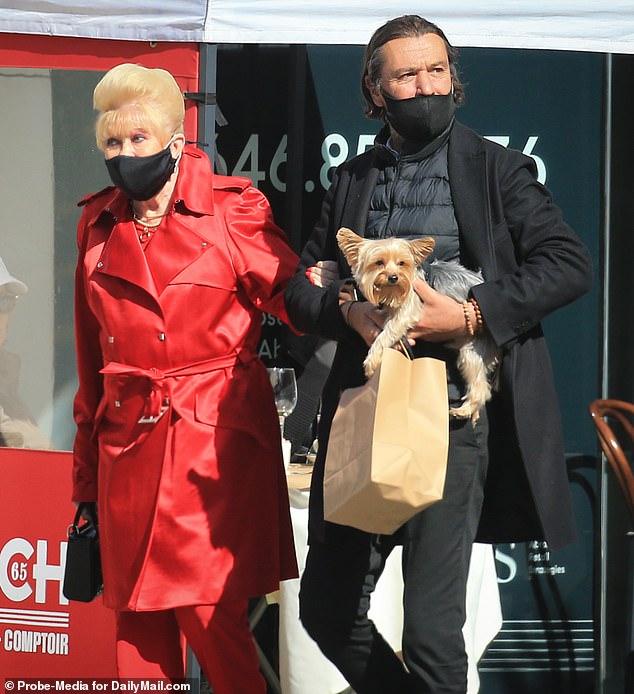 The pair always insisted that they were just close friends, however they were regularly photographed out and about together in New York, including back in March of this year 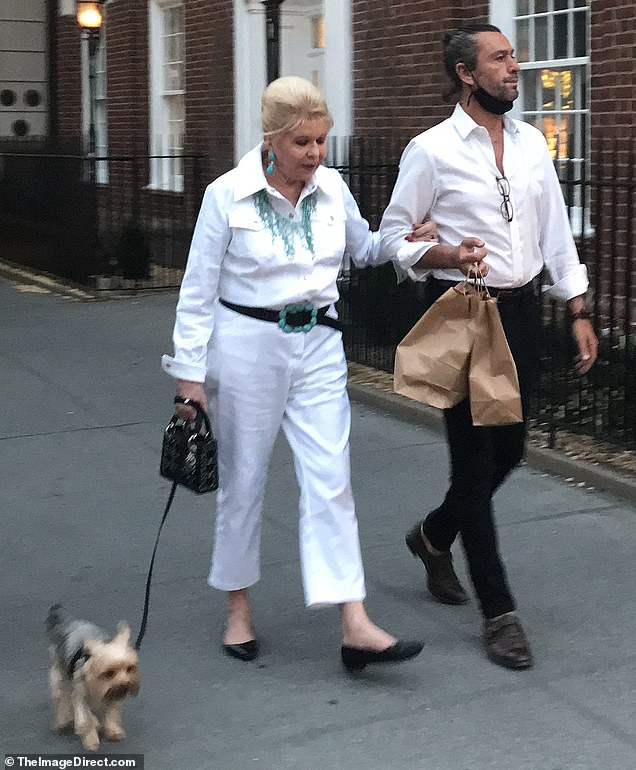 The duo are pictured getting ready to enjoy a Fourth of July dinner together. The two have maintained that they are close friends, though Rossano previously said a romantic reunion is always possible.

News of the 49-year-olds death was announced on Twitter by Italian television presenter, Simona Ventura on Friday evening 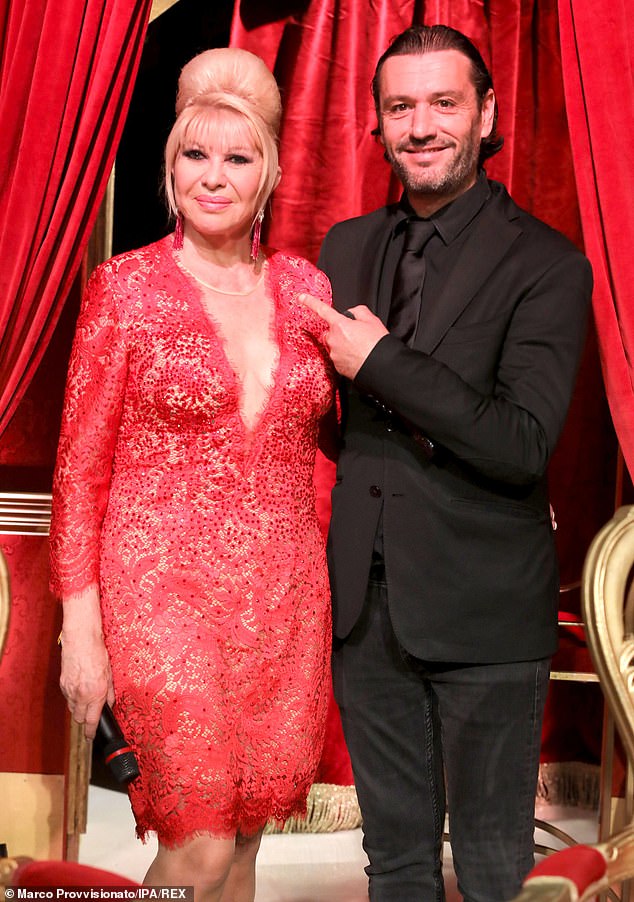 Even after their divorce, the couple had an on-again, off-again relationship which continued until 2019, when Ivana announced they had ‘called it quits’. They are pictured in 2018 during the Italian version of Dancing With The Stars

Ivana Trump dated Rubicondi for six years before they married in April 2008 when he was 36 and she was 59.

The couple’s $3 million wedding for 400 guests was hosted by her ex-husband Donald Trump and set to the theme of Shakespeares Midsummer Nights Dream, with daughter Ivanka as her maid of honor.

Although Ivana and Rubicondi divorced less than a year later, their on-again, off-again relationship continued officially until 2019 when Ivana announced they had once again ‘called it quits’.

But the couple were often seen together out and about in New York City and were last seen together in August just months before his death.

In fact, throughout 2021, the pair were seen enjoying one another’s company on at least five occasions.

The official causes of the 49-year-old’s death are still unknown.

Born in Rome on March 14, 1972, Rubicondi moved to London at a young age where he began working as a model.

After discovering his passion for the world of cinema, he managed to secure small roles in films.

In recent years had some small parts in films including the Golden Bowl starring alongside Uma Thurman and Kate Beckinsale as well as some Italian reality TV including Dancing with the Stars and I’m a Celebrity.

Rubicondi had been Ivana’s love interest since 2002 when they began dating but even after their divorce in 2009, the pair were never truly apart. 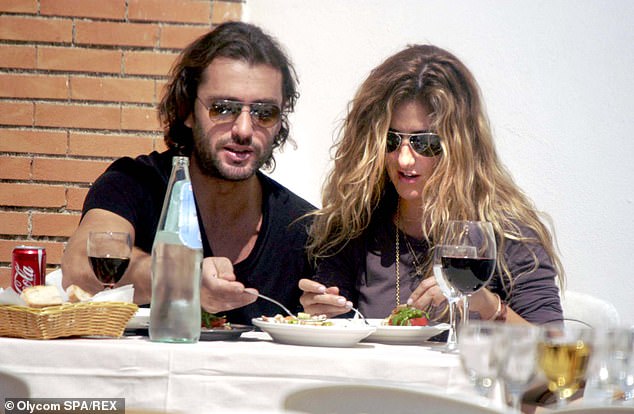 This past summer appears to have been relatively low-key for Ivana – who would usually travel to Europe during the warmer months, but she appeared to have opted out of any far-flung trips, perhaps because of the COVID pandemic.

Instead, the businesswoman was spotted out and about in New York on a handful of occasions – including enjoying a several fun-filled dinner with Rubicondi as recently as August.

The pair had always maintained that they are just very close friends, though Rubicondi had even said previously said that a romantic reunion is always possible.

Ivana announced their ‘official’ split back in June 2019 before escaping to Saint-Tropez for the summer, admitting that the time she spends on the French Riviera was part of the reason why she and her longtime beau couldn’t make their relationship work.

‘The relationship just ran its course,’ she told Page Six at the time. ‘Rossano spends a lot of time in Italy and I spent a lot of time in New York, Miami, and Saint-Tropez, and he has to work.’ 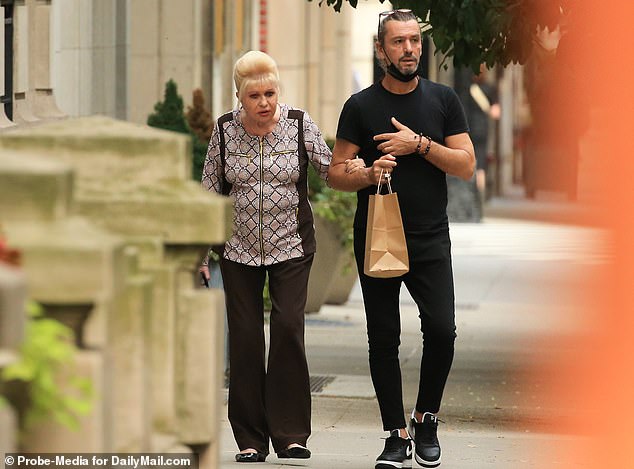 In August,  she was then seen strolling around the city with her on-again-off-again partner Rossano Rubicondi, 49, just months before his death 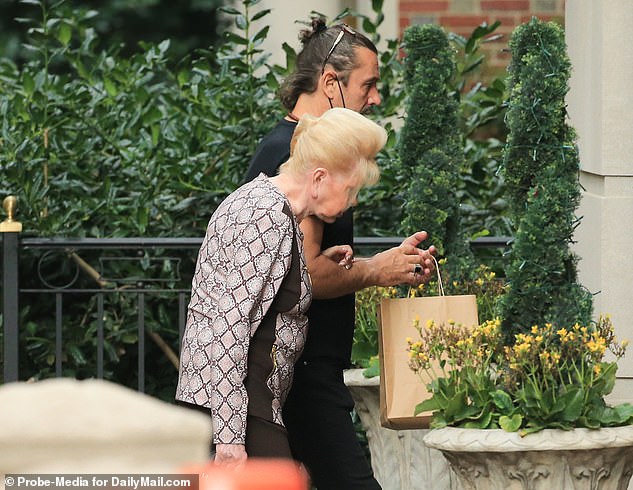 ‘The long-distance relationship really doesn’t work,’ she added. ‘We had a good time and are friends. The split was amicable.’

Rubicondi, meanwhile, asserted that he has ‘good respect’ for the businesswoman following their breakup, but he later made it clear that her children were a source of ire in their romance.

He emphasized that he wasn’t after the matriarch’s fortune and suggested that money was often something he quarreled with her children about.

The former couple dated for six years before they tied the knot in 2008 during a lavish $3 million ceremony at Mar-A-Lago, the Palm Beach estate owned by none other than Ivana’s second ex-husband, Donald Trump.

Ivana said she had actually filed for separation three months prior and blamed the split on her and Rubicondi’s different preferences for their cities of residence.

The couple had faced rumors that Rubicondi had been unfaithful to her while filming the TV show Survivor in Honduras, which Ivana denied it in her Page Six column. 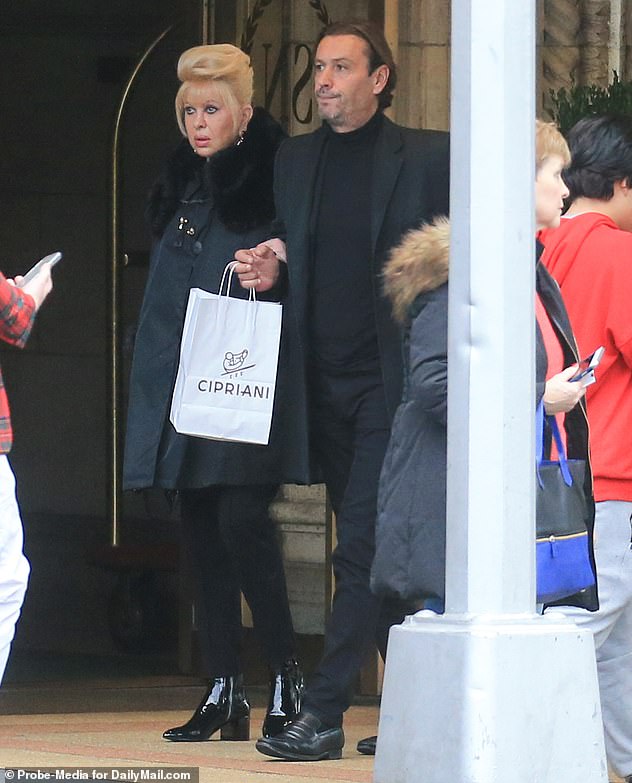 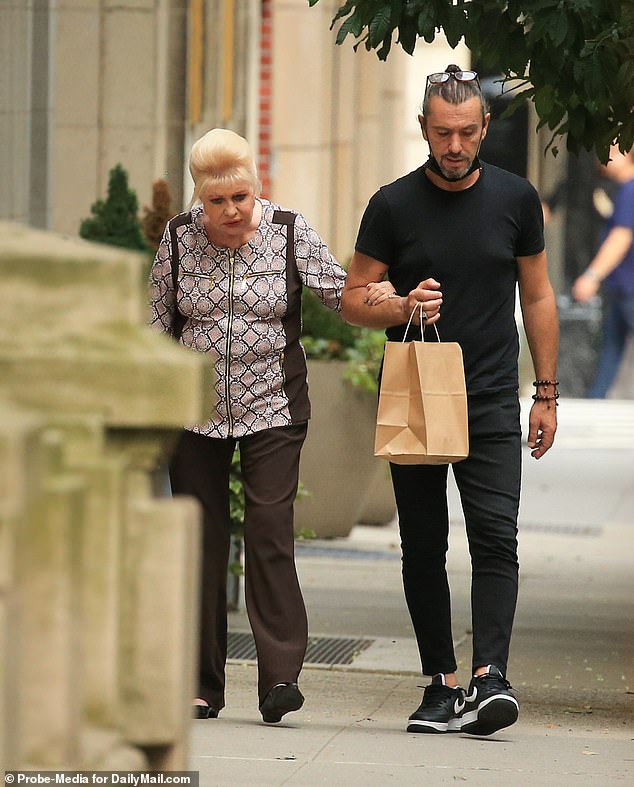 The couple officially split in 2019, however Rubicondi hinted at the time that there was a possibility they would reunite romantically again. They are pictured together this past July 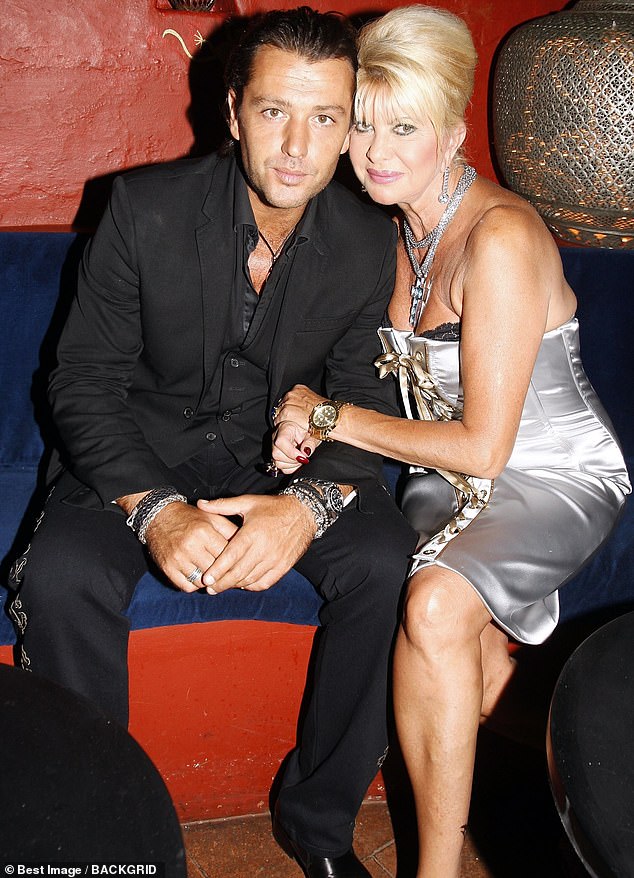 The former couple, pictured in 2007, dated for six years before they tied the knot in 2008. They divorced just months later in 2009, only to reunite shortly after 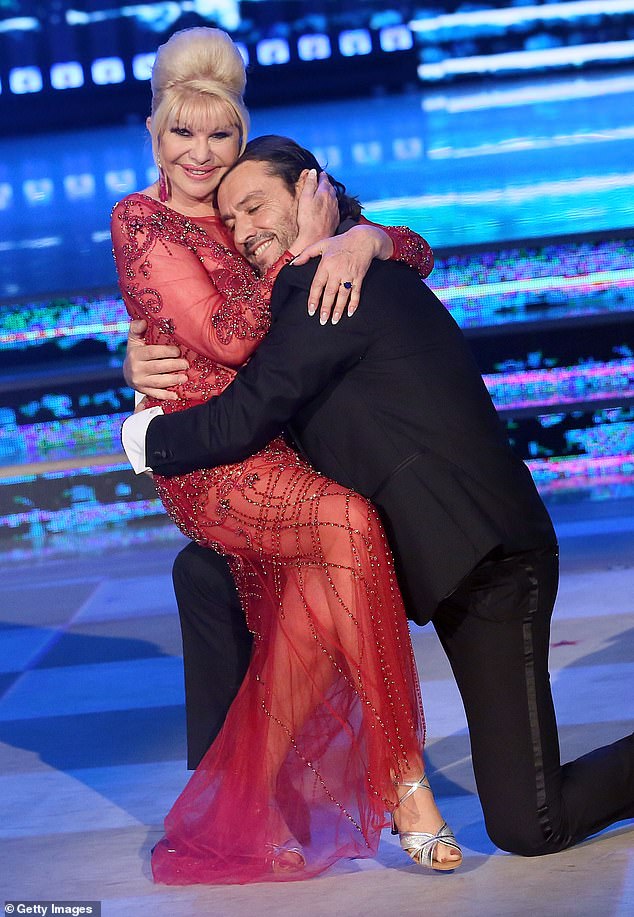 Ivana has been living in New York City since the mid-1970s, after relocating to the US from Canada, following her move from her home in Czechoslovakia, and she has spent much of that time residing on the Upper East Side, where she currently lives in a sprawling apartment.

It was in Manhattan where the former model met Trump, with whom she tied the knot in 1977. The couple were married for 13 years before divorcing in 1990 after Trump had an affair with Marla Maples, who went on to become his second wife.

However relations between Trump and Ivana – who have three children together, Don Jr, Eric, and Ivanka – have remained cordial over the years, and she recently revealed that she had spoken to her ex-husband to wish him a happy birthday last June.

‘Donald hates his birthdays,’ Ivana said at the time. ‘So I did speak to him and wished him happy birthday and told him, “Don’t worry about your age. Age is just a number…”‘

Many of Ivana’s children have chosen to move away from New York in the past year however, with both Ivanka and Don Jr opting to follow in their father’s footsteps by relocating to Florida after Trump’s presidency ended in January.

Eric is currently the only one of Ivana and Donald’s children still living in the city, where he is based with his wife Lara and their kids. 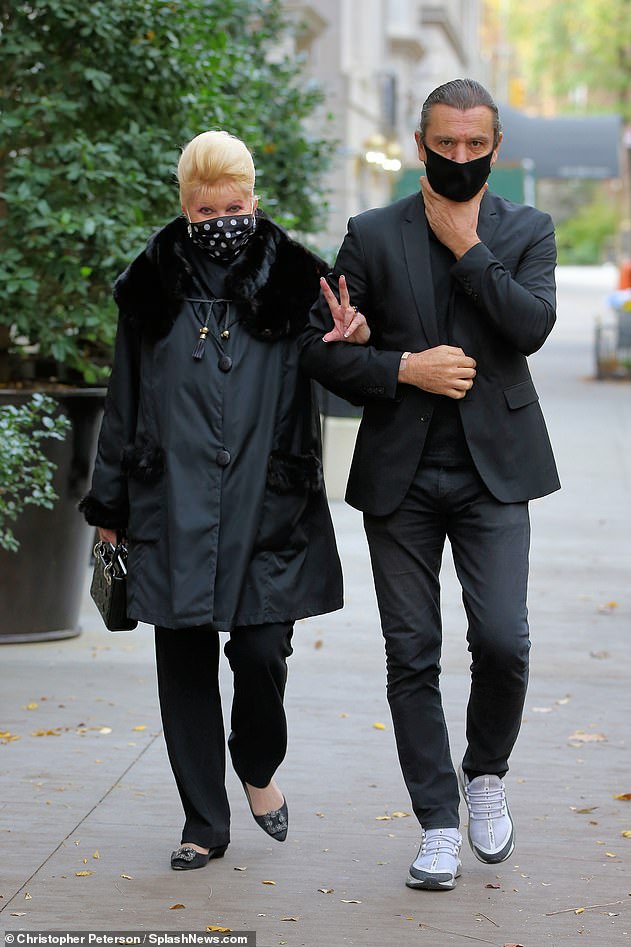 Ivana Trump flashed a peace sign as she and her on-again, off-again boyfriend Rossano Rubicondi enjoyed a walk on the Upper East Side of Manhattan last November 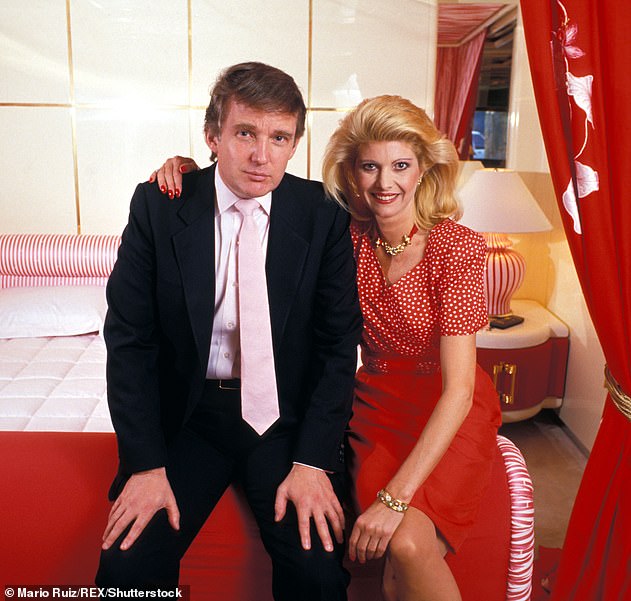 Ivana, a businesswoman and former model, was married to Donald for 15 years from 1977 to 1992. The couple are pictured together in July 1988