A campaigner who lost her husband in a smart motorway horror crash has called for the return of hard shoulders before more lives are lost, warning today: ‘A coach of schoolchildren will be next.’

MPs have urged officials to pause the construction of ‘all-lane’ smart motorways and accused them of pressing ahead despite ‘major concerns’ about the use of the hard shoulder as a live traffic lane, which critics claim has contributed to dozens of deaths in recent years.

In a damning report, the Commons Transport Select Committee warned technology designed to save lives is still not in use despite a promise given in 2016 to MPs. It also raises serious doubts about stopped vehicle detection systems and calls for a review by watchdogs at the Office of Rail and Road (ORR).

Speaking to ITV’s Good Morning Britain this morning, widow Clare Mercer – whose husband Jason died in June 2019 aged 46 on a stretch of the M1 with no hard shoulder – urged for the return of hard shoulders before a ‘coach full of schoolchildren on a daytrip’ breaks down.

Mrs Mercer, who is campaigning against smart motorways and protested in Westminster yesterday, told hosts Richard Madeley and Susanna Reid: ‘We need to stop them now. We need to turn the first lane off and have the hard shoulder back. That was the placard I was carrying yesterday. Will you listen when it’s a coach full of schoolchildren on a daytrip. It is a recurring nightmare of mine, because it will happen.

‘They are trying to turn the entire country’s network into these things.’

She continued: ‘This is why we’re have to bring disability discrimination claims. Disabled people are sitting ducks. You’re not legally able to discriminate against disabled people. Two weeks ago they opened a section of the M4 in Berkshire with absolutely no technology in it at all.

‘We’re having to campaign because all they’re doing is talking. There’s been ten reviews into smart motorways this year alone. That’s why we had to carry coffins to Westminster yesterday.’

In an interview with BBC Radio 4’s Today programme, Huw Merriman, Tory chairman of the Transport Select Committee, added: ‘Our recommendation is to pause it, and give ORR powers to determine performance. Our call is for a measured approach over time. 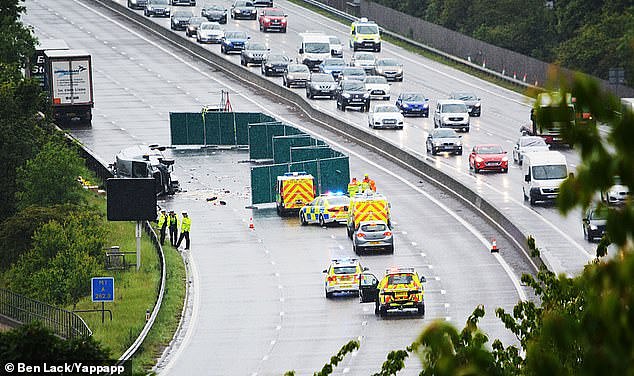 Deadly safety flaws mean the construction of smart motorways must be halted, MPs say today. In a damning report, they accuse transport chiefs and civil servants of pressing ahead with the roads despite ‘major concerns’ (pictured: deadly crash on smart motorway near Sheffield in 2019) 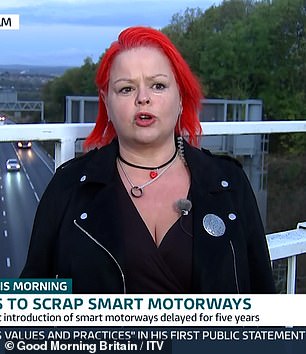 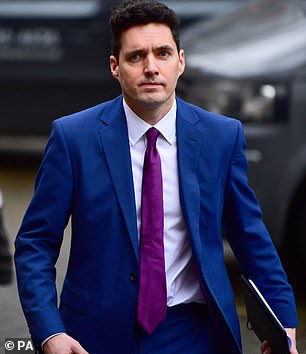 Clare Mercer, left, and Conservative MP Huw Merriman, right, are urging a pause to the construction of smart motorways

Families of smart motorway victims carried coffins through Westminster yesterday to demand the immediate reinstatement of the hard shoulder.

Around 50 protesters marched to the Department for Transport to pile pressure on the Government to put an end to the controversial roads.

The cardboard coffins symbolised the 53 people killed on smart motorways between 2014 and 2019.

Some of the protesters’ loved ones died after breaking down on all-lane running motorways.

‘I want to see smart motorways abolished,’ said the 33-year-old ex-model. ‘The Government needs to be held accountable for introducing these murderous roads.’

Mr Gallowtree was driving along a smart motorway section of the M6 near junction 18 in April when his motorbike suddenly began losing power and he was unable to reach safety without a hard shoulder.

He required emergency surgery and remained in hospital for five weeks for a shattered knee cap and major wounds.

‘There’s 15,000 miles of conventional motorway. It’s all raw and new. We need to allow a process of evidence to take place. To take knee jerk reactions would be wrong. National Highways, focus on retrofitting them.’

In their report, the MPs wrote: ‘Lives would almost certainly have been saved had the technology been in place sooner. The promised safety improvements were delivered neither efficiently nor effectively.’

Stopped vehicle detection (SVD) technology is supposed to detect vehicles when they break down, alerting CCTV controllers and traffic officers so they can reach cars marooned in live traffic.

The report says MPs on the committee raised concerns five years ago about ‘all-lane running’ (ALR) motorways, where the hard shoulder is permanently removed.

Safety measures in an action plan ordered by Transport Secretary Grant Shapps last year did ‘not fully address the risks associated with the removal of the hard shoulder’, the report says.

This is partly because he demanded only that National Highways, the agency responsible for the motorways, ensured emergency laybys were closer together in future schemes.

For use by drivers who break down in live traffic, current laybys are up to 1.5 miles apart. But the committee calls for a ‘retrofit’ programme on existing schemes so they are a ‘maximum’ of a mile apart, or 0.75 miles ‘where physically possible’.

The report adds: ‘In conclusion, we are not convinced that the benefits of all-lane running motorways are sufficient to justify the risks to safety associated with permanently removing the hard shoulder.’

It stops short of calling for the hard shoulder to be reinstated, saying the reduction in road capacity this would cause could push more vehicles on to ‘less safe’ local roads, resulting in more deaths and pollution.

Instead, the committee says the rollout of ALR should be paused until more data is available to prove they are as safe as National Highways claims.

Five years of safety data is available for only 29 miles of ALR routes, making assessments for decision-making ‘limited’ and ‘volatile’.

The committee says the analysis should be extended to the remaining 112 miles of ALR installed prior to last year – and in the meantime the rollout should be halted.

The Government decided last year that this format should become the default smart motorway in England, but this was ‘premature’, the report says.

It notes that other types of smart motorways, where the hard shoulder is not permanently removed, have lower casualty rates.

‘Controlled’ smart motorways, which retain the hard shoulder but have technology installed, are the safest M-roads and ministers should revisit the case for them, the report says. 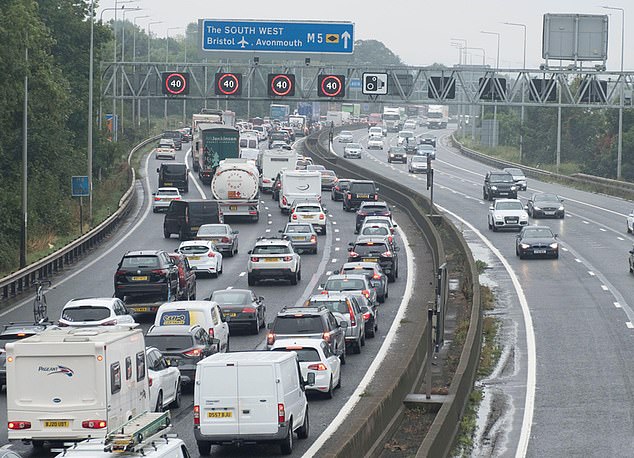 Fifty-three people died on smart motorways in four years to 2019, with at least 18 of the deaths attributed to the smart motorway safety system 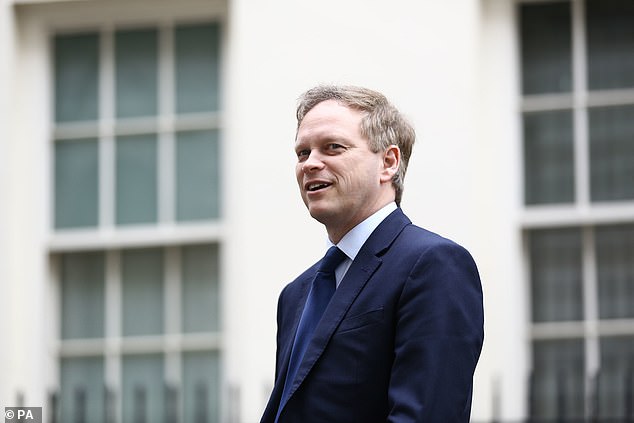 Safety measures in an action plan ordered by Transport Secretary Grant Shapps (pictured outside Downing Street) last year did ‘not fully address the risks associated with the removal of the hard shoulder’, the report says 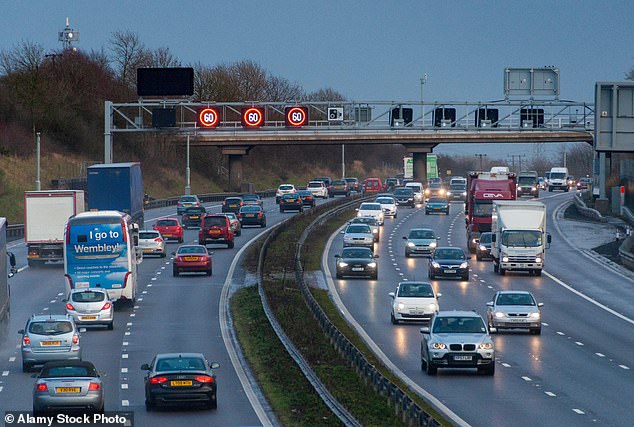 Technology designed to save lives is still not in use despite a promise given in 2016 to the Commons transport committee, which wrote today’s report (pictured: Heavy traffic on the M1 ‘smart motorway’ in Bedfordshire)

One of the most damaging passages of the report states: ‘Successive administrations, together with the Department [for Transport] and National Highways’ predecessor, Highways England, underestimated the scale of safety measures needed effectively and reliably to mitigate the risks associated with the permanent removal of the hard shoulder.

‘The Department and Highways England failed to deliver safety improvements to all-lane running motorways in a timely fashion, despite having promised previous transport committees that such improvements would be prioritised. Moreover, the communication of this radical change in the design of our motorways has been woeful.’

The MPs praise the Daily Mail’s devastating undercover investigation into the safety of smart motorways. A reporter working at the South Mimms regional control centre in Hertfordshire for six weeks discovered more than one in ten safety cameras were broken, misted up or facing the wrong way.

Fifty-three people have died on the roads in the four years to 2019, with at least 18 of the deaths attributed to the system.

Tory MP Greg Smith, who sits on the transport committee, said: ‘The evidence in this report, along with excellent investigations by newspapers like the Daily Mail, highlight just how far we still need to go to ensure the safety of the great British motorist.’

Fellow Tory MP Karl McCartney, another member of the committee, went a step further, suggesting a full-blown public inquiry might be necessary. 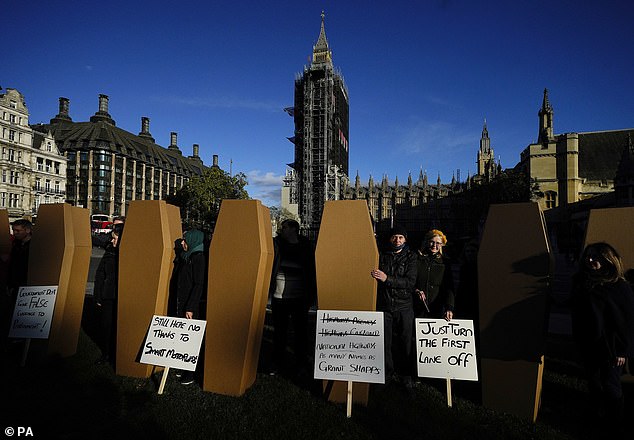 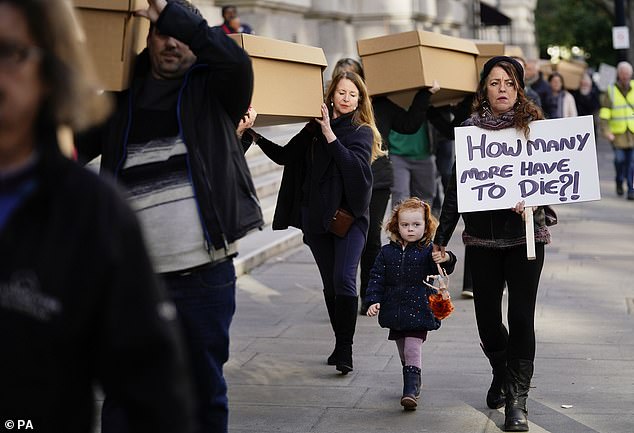 He added: ‘Smart motorways are, and always have been, a lazy, bean-counting and dangerously-held view of a means of trying to expand motorway capacity without spending any more of the huge amount of money raised by vehicle and fuel taxes.’

The inquiry finds that emergency services are struggling to reach the front of incidents on ALR motorways when all four lanes are gridlocked. It recommends that the Office of Rail and Road signs off major changes to England’s roads, becoming a de facto regulator.

Forty per cent of breakdowns on ALR motorways take place in a live lane because motorists cannot reach an emergency layby.

And a poll by the RAC found 60 per cent of drivers want ministers to go one step further than the committee’s report and scrap smart motorways, reinstating the hard shoulder.

Jim McMahon, Labour transport spokesman, said: ‘The Government must finally listen to what it is being told by countless victims’ families, or we face more tragedy on our roads.’

A DfT spokesman said: ‘We’re pleased that the transport committee recognises that reinstating the hard shoulder on all all-lane running motorways could put more drivers and passengers at risk of death and serious injury and that we’re right to focus on upgrading their safety.’