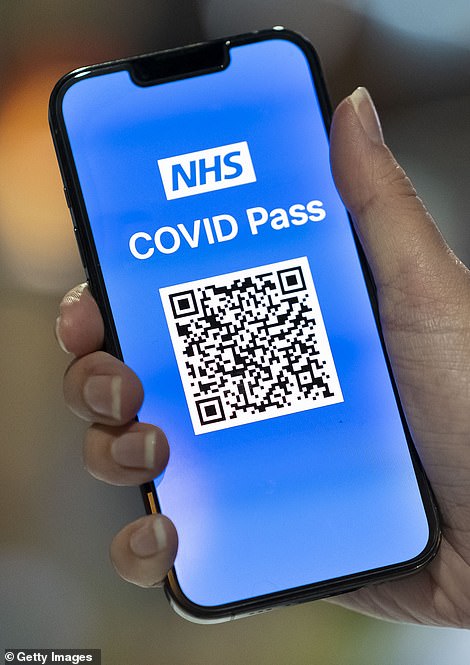 MPs in Wales have voted to extend controversial Covid passports to cinemas, theatres and concert halls

MPs in Wales have voted to extend controversial Covid passports to cinemas, theatres and concert halls.

People have been required to show they are fully vaccinated or have tested negative for the virus to enter nightclubs and similar venues since last month.

But from November 15, entry to cinemas, theatres and concert halls will be regulated by the scheme after members of the Welsh Parliament dramatically approved the extension to mixed reaction.

The new law brought by the Labour government passed with 39 Members of the Senedd voting for and 15 against, with the Welsh Conservatives and Liberal Democrat Jane Dodds opposed.

Officials insisted that the Covid passport was popular, with Health Minister Eluned Morgan saying the extension was designed to keep cinemas and theatres open over the winter months.

However, the vote came in stark contrast to October, when Welsh ministers won the first Covid passport decision by just a single vote after one Tory MS was unable to log on to Zoom to vote remotely.

At the time, the Welsh government – which holds exactly half of the 60 seats in the Senedd – had faced defeat with the whole opposition united against the controversial scheme.

Protesters gathered on the steps of the Welsh Parliament in Cardiff Bay yesterday amid concerns over the implications of the passports on civil liberties. The extension has divided opinion among those working in hospitality, which has been hard hit by Covid restrictions.

Their pre-action letter sent to the Welsh government claims no evidence has been provided that the mandatory use of Covid passes will benefit the public health and that the ‘disproportionate’ scheme breaches the right to privacy under the Human Rights Act.

It comes as official figures show that Covid rates across the whole UK have continued to plummet, with cases, deaths and hospital admissions all falling week on week. 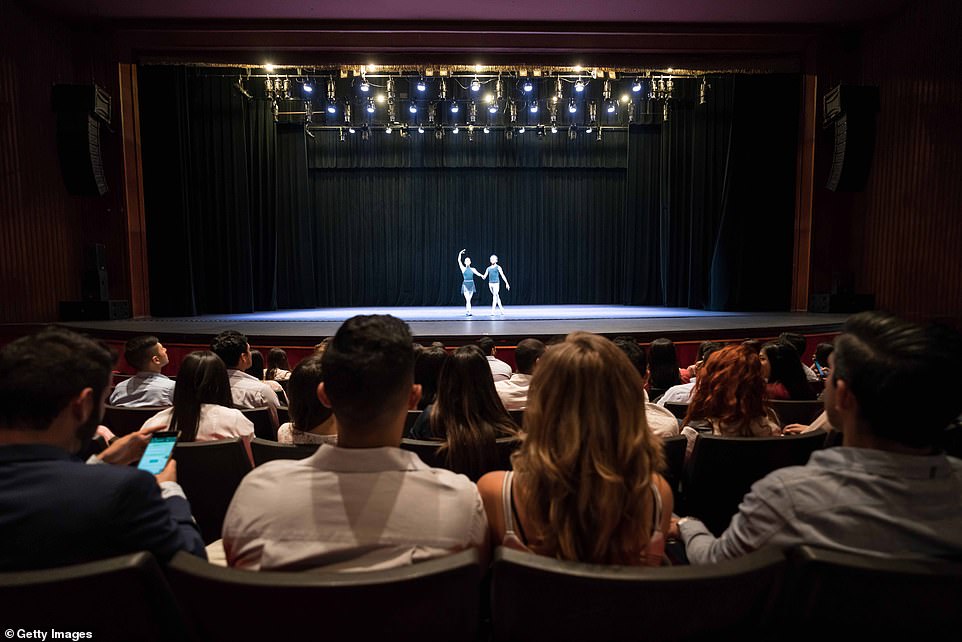 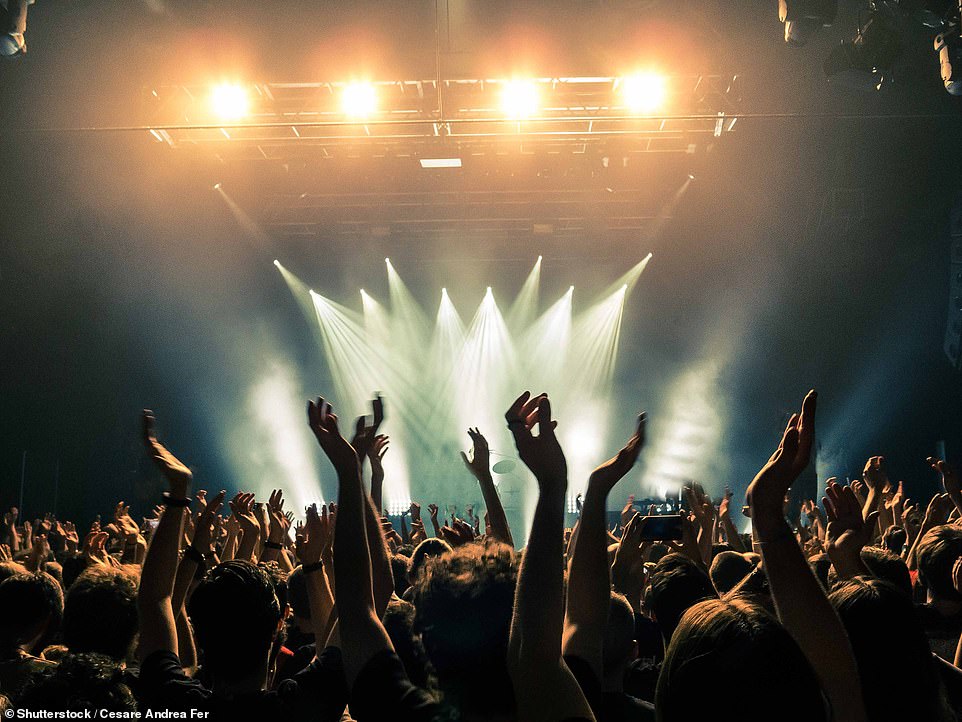 From November 15, they will also need to show they are fully vaccinated or tested negative for Covid to enter concert venues (stock image) 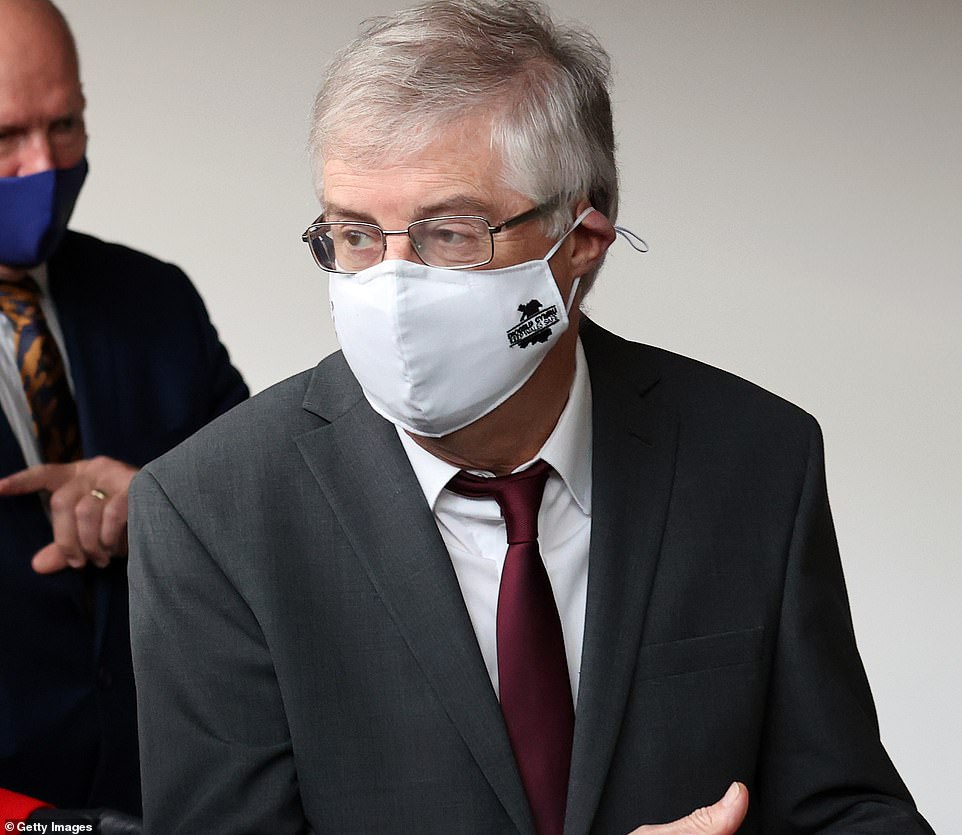 Mark Drakeford, First Minister of Wales, at the Welsh Parliament on October 14, 2021

What are the rules in Wales on showing an NHS Covid Pass?

From November 15, people in Wales must use the NHS Covid Pass to show that they are fully vaccinated or have tested negative to attend cinemas, theatres and concert halls as well as large events and nightclubs.

To get into these venues you will need to prove one of the following two:

You can use the NHS Covid Pass, or test results emailed or sent by text message are also considered proof of a negative test.

Cardiff Bay’s Wales Millennium Centre said it welcomed any moves that would ensure the safety of its audiences and allow it to remain open, particularly before Christmas.

However, Steve Reynolds, director of Picturedrome Cinemas, which runs Maxime cinema in Blackwood, told the BBC that he believed cinemas and theatres were being ‘singled out’ and worried about the impact it could have on trade.

Its chief executive Michael Kill added: ‘There is a huge concern throughout the hospitality and night time economy sectors that Welsh government will take this even further to encompass more businesses, which without a doubt will cripple the industries involved.’

‘Covid IDs don’t tell you that a person doesn’t have Covid or can’t spread Covid, but do make society less free and less accessible for people.

‘Within weeks, this mandatory health ID scheme has already been significantly expanded in absence of an evidence base. This is safety theatre that does nothing for public health but unfairly burdens businesses and excludes citizens.

‘There are far more proportionate, effective and inclusive measures to keep people safe and get the country back to normal than excluding healthy people without the right health papers from society. But we can never get back to anything like normal with health ID checks that will inevitably continue to expand.

‘We urge the Welsh government to scrap these divisive and discriminatory Covid passes. If they don’t, we will seek to make our case in court.’

Conservative constitutional spokesman Darren Millar said there were ‘many ethical and equality issues with Covid passes’, repeating concerns that results from lateral flow devices are self-declared.

‘You can swab your dog and put its result in that system and still get your vaccine passport to be able to attend any event, nightclub, cinema theatre or anywhere else, it is ridiculous,’ he added.

Welsh Liberal Democrat leader Ms Dodds said her opposition was ‘foremost’ about ‘the lack of evidence’. She told the Senedd she had still not received any evidence that the passes ‘work to reduce transmission or to improve the uptake of the vaccine’.

Ms Morgan said: ‘I am pleased the extension has been agreed today following the vote. Covid has not gone away and cases remain high and we need to continue to take steps to keep Wales safe. The NHS Covid pass is one measure among many to help to keep businesses open while also helping to control the spread of the virus. The decision to introduce them has not been taken lightly and the venues that will be covered are indoors and see large numbers of people being closely together for prolonged periods of time.

‘Since 11 October, people have been required to show an NHS Covid pass or recent negative lateral flow test result to enter nightclubs, similar venues and events and the service is working well.

‘We have received positive feedback from a range of businesses and organisers of major events, including following the recent rugby internationals. We will continue to work with the sectors who are implementing the scheme to best support them.’ 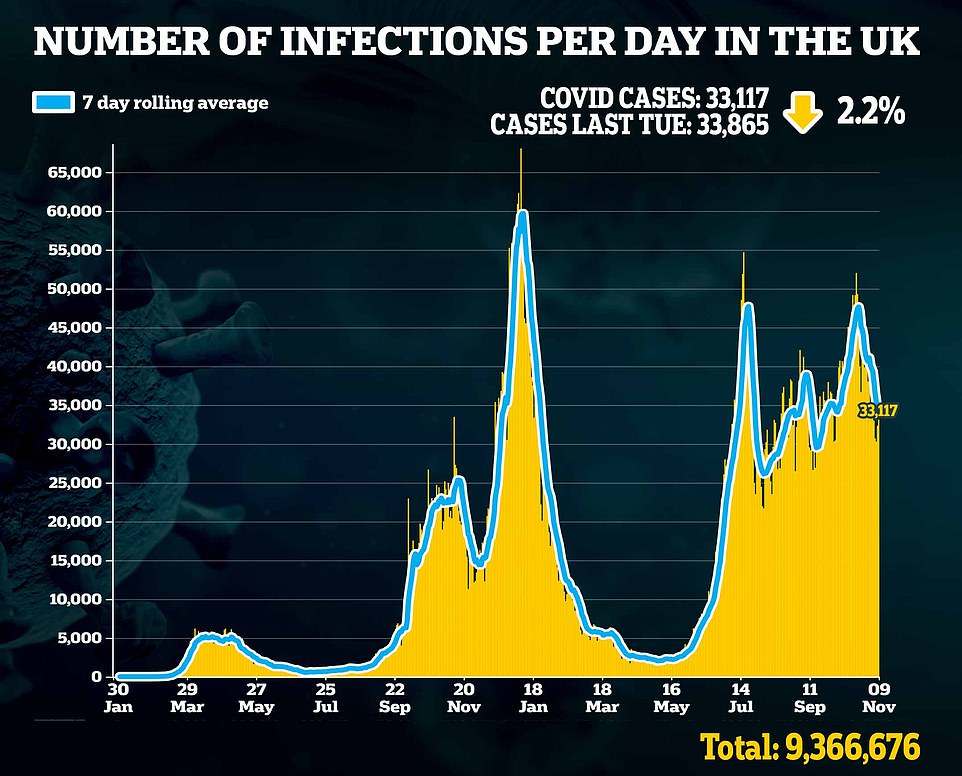 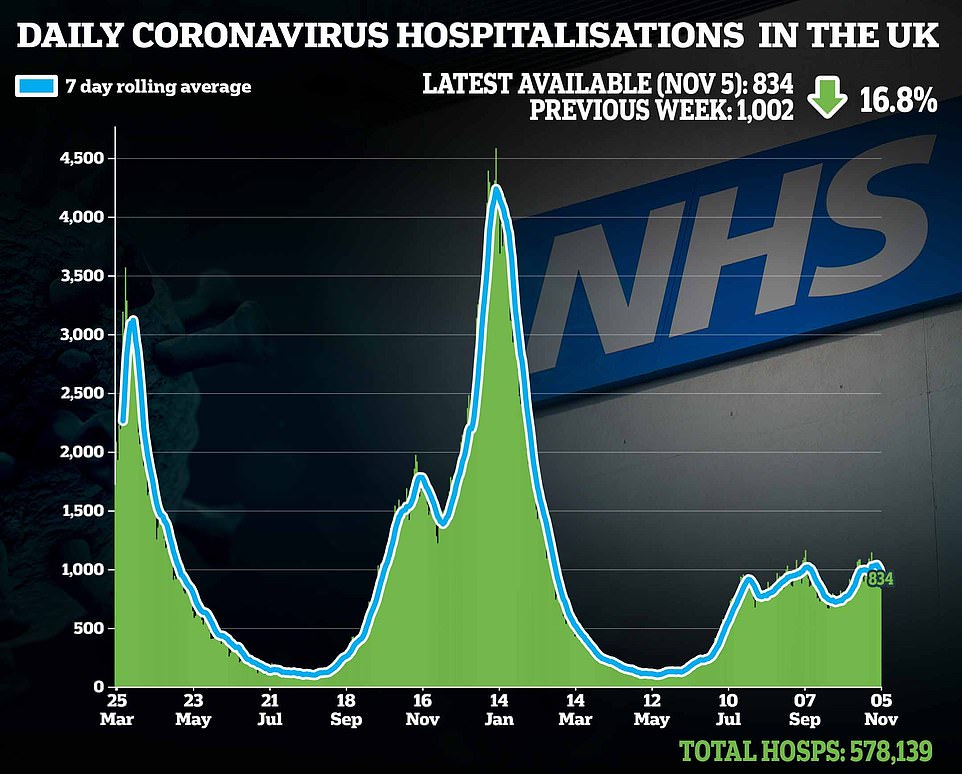 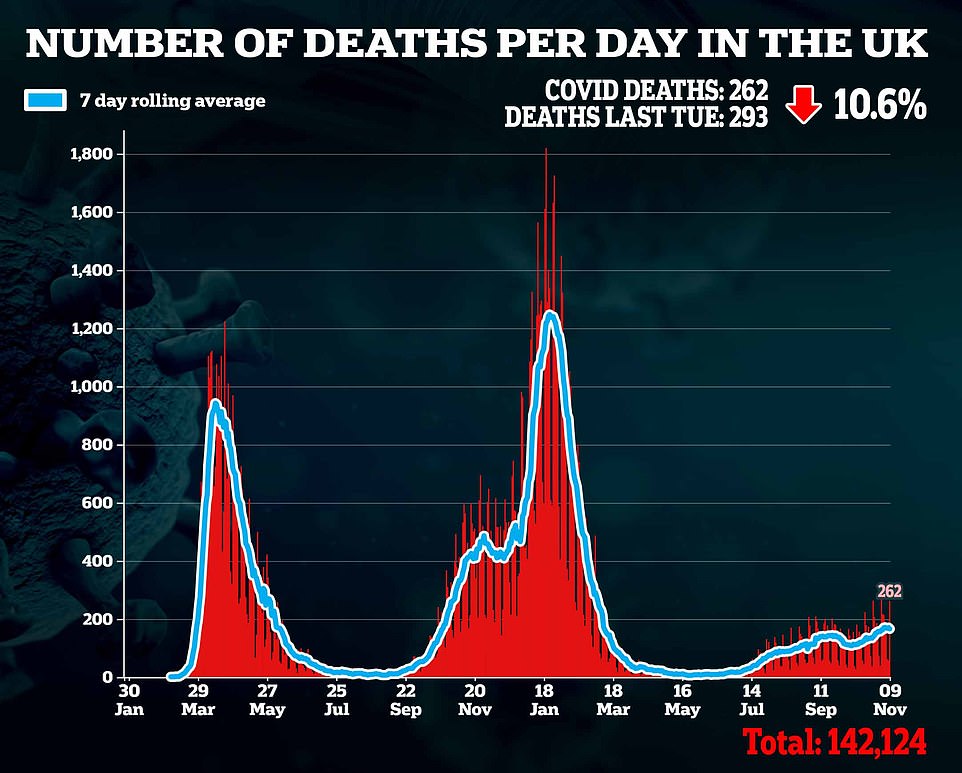 It comes amid concerns that the new ‘no jab, no job’ rule in NHS England might only spur on around 20,000 workers to get vaccinated against Covid.

A white paper into the impact of the policy was published by the Department of Health last night after the Health Secretary, Sajid Javid, announced that all frontline NHS workers in England need to be double-jabbed against Covid by April 1 or they will be sacked.

The document estimates that just 22,000 of the 125,000 currently unvaccinated staff – including medics, cleaners, porters and receptionists – will get their jabs by that deadline. 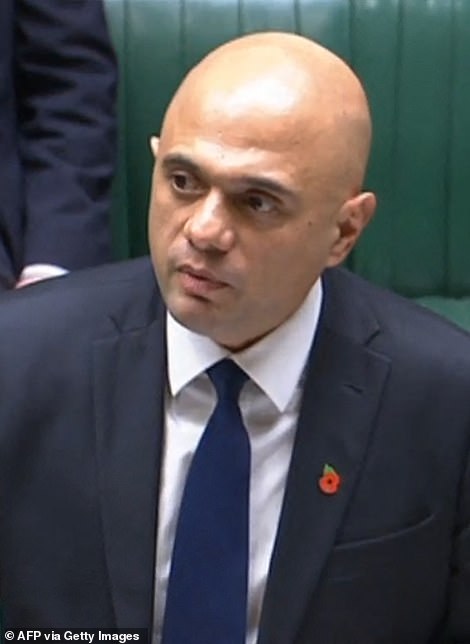 Health Secretary Sajid Javid making a statement on vaccinations in the Commons on November 9, 2021

It also shows that ministers expect 73,000 not to come forward for the vaccines and by default lose their job. The remaining 30,000 are medically exempt.

Mr Javid said the ‘scales clearly tipped to one side’ in favour of compulsory jabs, but critics say they are unnecessary given that 90 per cent of staff are already fully jabbed and 93 per cent have had their first dose.

Trade union GMB warned the ‘bulldozing’ policy will only worsen the ‘crushing’ staffing crisis. The health service already had around 100,000 vacancies before Covid struck, including a shortfall of 10,000 doctors and 35,000 nurses.

Unvaccinated staff have already threatened to quit on the back of the announcemnet, with one trainee nurse telling MailOnline it was a ‘kick in the teeth’ after working tirelessly on wards through the pandemic. Ryan Balment, 38, was set to graduate as a nurse in two years, but says he will now become a dog trainer.

But advocates of the move, including former Tory health secretaries Matt Hancock and Jeremy Hunt, argue health workers have a duty of care to their patients.

Figures showed that more than 11,000 patients died from Covid after catching the virus in NHS hospitals while being treated for other illnesses.

Speaking to Sky News this morning, Mr Javid said ‘it’s our duty’ to make sure patients are safe.

Asked about compulsory jabs for NHS staff, he said: ‘We know that the vaccines work, we also know that patients in hospital, in care, these are some of the most vulnerable people in our society and if they are exposed to Covid it could be fatal, and I think it’s our duty to make sure that they are as safe as they can be.

‘That’s why I announced this yesterday, so that from April next year, that if you work in the NHS or care, you will be required to be vaccinated and I want this to be a positive decision for everyone and to work with them.

‘There will be absolutely no scapegoating, no singling out, no shaming, but working with colleagues to support them in every way that we can to help them make this positive decision so they can protect themselves, their colleagues and, most of all, their patients.’