A Republican truck driver who spent just $153 on his campaign may manage a stunning upset victory against the longest-serving legislative leader in New Jersey history in the state’s elections on Tuesday.

The defeat could be another embarrassing upset for the Democrats following a night where they lost the Virginia gubernatorial election, struggled in the race for New Jersey governor and performed dismally in votes across the country.

Sweeney, an Ironworks union official and one of the most powerful politicians in the state, has been a state senator for nearly two decades. He became Senate President in 2010.

Durr, 58, is employed as a truck driver for furniture store Raymour & Flanigan. He grew up in South Jersey and has three children and six grandchildren.

Sweeney was also floated as a possible 2024 gubernatorial candidate, before facing a possible loss now.

But it appears now that Sweeney – who spent millions in 2017 on one of the most expensive state legislative races in US history – was bested by a trucker who only spent about $153 to try and unseat him.

Sweeney’s likely defeat is shaping up to be part of a wider rebellion of suburban and working-class Americans against Democrats. The incumbent Democratic Governor Phil Murphy is just barely ahead of his Republican challenger in a race that polls had indicated would be a blue landslide. 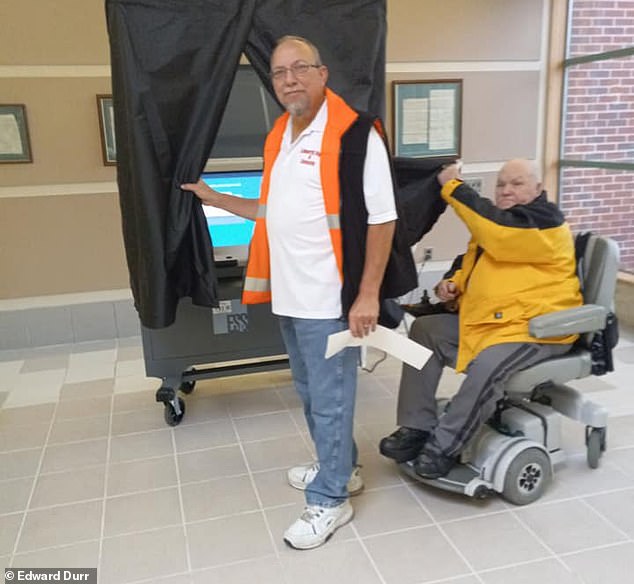 Durr posted a photo of himself to social media going to vote on Tuesday, hours before his potential victory 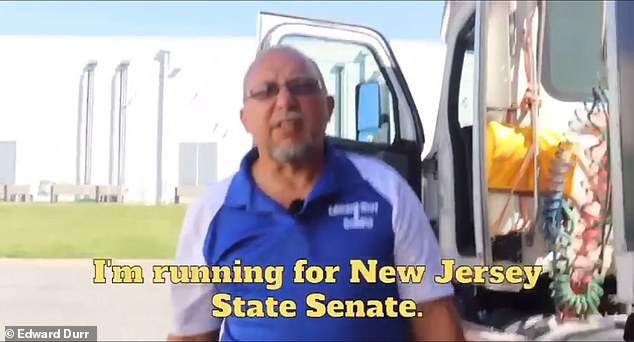 And unexpected outcomes across local and state races  have forced the state’s Senate Democrats to postpone a leadership conference – until after they can figure out who survived the competition.

‘Due to the closeness of several State Senate elections, the leadership caucus scheduled for tomorrow will be delayed,’ Sweeney had announced in a statement. ‘The caucus will be rescheduled once the result of every Senate election is determined. 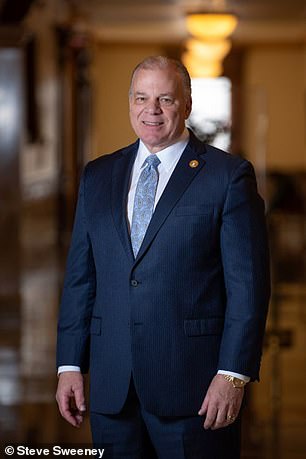 It can even be seen in Virginia, where Republican first-time candidate Glenn Youngkin won the gubernatorial race against a former governor, Democratic powerhouse Terry McAuliffe.

He’s never held elected office but said in a past interview that he was spurred to run in his blue collar and predominantly white area by being unable to get a concealed carry permit.

The trucker launched a failed bid for New Jersey’s lower house in 2019.

But now for the first time since 2002, his legislative district will be represented by a pro-Second Amendment conservative Republican, rather than a Democrat who once reportedly called New Jersey’s former GOP Governor Chris Christie a ‘rotten bastard.’

Durr’s campaign video, which he appears to have shot himself, paints Sweeney as complacent to Governor Murphy’s actions leading the state through the COVID-19 pandemic and its high property taxes.

‘In 2020, my opponent sat by and watched as Governor Murphy forced nursing homes to take in COVID-19 patients, resulting in the death of over 8,000 of our seniors,’ Durr says while walking through a cemetery in broad daylight.

‘He remained silent as Governor Murphy, with his lockdown and mandates, forced the closing of over one third of our small businesses costing New Jersey families thousands of jobs. 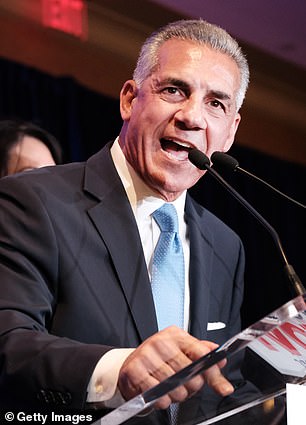 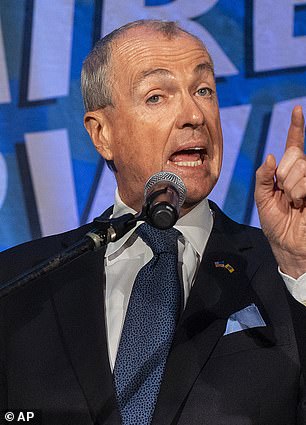 ‘He has done nothing, as seven out of every ten moves are leaving the state, placing a heavier burden on those of us who remain. The Senate president has spent 20 years in Trenton – higher taxes, increasing debt and a rising cost of living. We deserve better. New Jersey, it’s time for a change.’

Durr described himself to Politico as a ‘constitutional conservative’ who has backed cutting an array of different taxes for ‘businesses to grow’ and supports federal legislation to ban abortion.

He’s also advocated for lowering the state’s property taxes – the highest in the nation – which is also a frequent issue brought into the race by Murphy’s challenger for governor, former state lawmaker Jack Ciattarelli.

Murphy has never sought to defend himself against the accusation, instead choosing to point out the quality of education, healthcare and other civil services those taxes can afford.

It may be why he and other Democrats were in tight spots on Tuesday.

Durr told Politico he picked up on feelings of discontent and distrust among South Jersians with the way Democrats were running the state.

‘Just the constant nepotism, corruption, “if you take care of me, I’ll take care of you” deals,’ Durr said. ‘You don’t have evidence, you can’t get anyone arrested or prove anything, but there’s always “when there’s smoke there’s fire” kind of statements.’