DOMINIC LAWSON: It's no cause for Schadenfreude... but anti-vax Germany is paying a deadly price
Advertisement

When it comes to Covid, the last thing we in the UK should be is smug. Too many lives have been lost for that.

On the other hand, it is hard to suppress feelings of relative contentment in our own circumstances when we look at what is happening in Germany and Austria.

In Austria, yet another lockdown has just been imposed. And it looks as though one might soon be in force across Germany, which is also considering the introduction of mandatory vaccination. 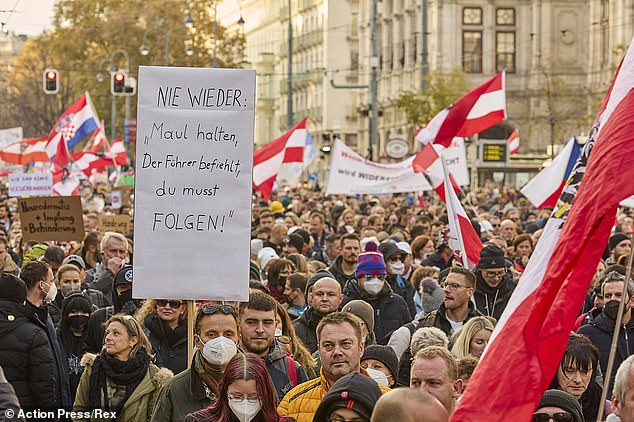 The reason — apart from the virulence of the Delta Variant — was pointed out by the German health minister, Jens Spahn: ‘We are currently experiencing a pandemic of the unvaccinated, which is massive.’

This was also the message of the country’s disease control agency chief, Lothar Wieler: ‘The fourth wave [of Covid] is developing in exactly the way we feared, because too few people have received the vaccine.’

The same is true of their fellow German-speaking cousins in Austria. This explains why a week ago, the government in Vienna imposed a lockdown on those who have refused to take the Covid vaccine.

Following this, British anti-vaxxers staged a demonstration outside the country’s Embassy in London — although now the Austrians have extended the enforced social distancing measures to the entire population.

Within Western Europe, the three outliers at the top of the ‘vaccine refusal index’ are Austria, Switzerland and Germany, with between 22 and 25 per cent unvaccinated among the population above the age of 12.

That is roughly twice as high as the percentage for the UK.

Here, thanks to the speedy and high take-up of the vaccination, the link between Covid infection and death has been, if not broken, then massively reduced. 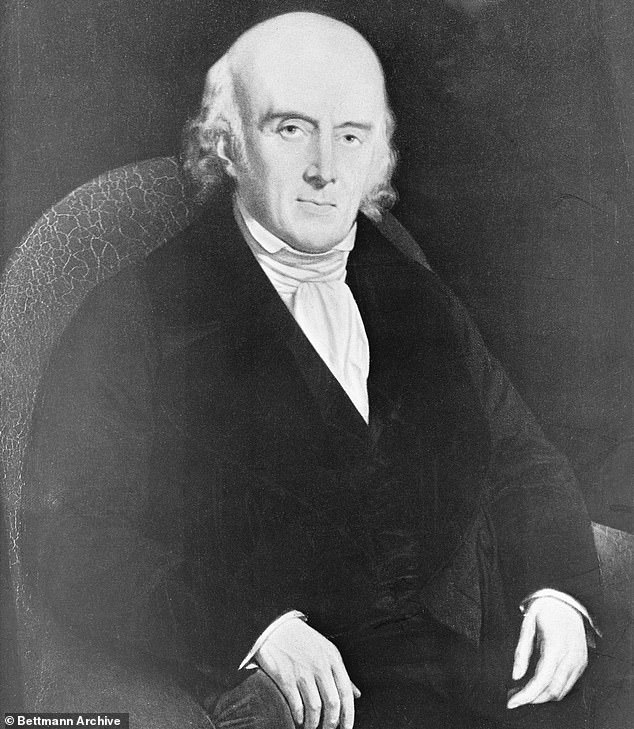 The doctrine of homeopathy — based on the idea that the more diluted the so-called active ingredient in a natural remedy is, the more effective it becomes — was invented by a German, Samuel Hahnemann (pictured)

The jabs, while they have waned in their impact on people’s susceptibility to infection, remain highly effective against serious illness.

A startlingly clear demonstration was revealed in figures released by the Office for National Statistics covering the period from January to September 2021: they showed that, adjusted for age, the mortality rate for the unvaccinated with Covid-19 was 849.7 per 100,000, compared with 26.2 per 100,000 for those who were ‘fully vaccinated’.

Above anything, this explains why the governments in Berlin and Vienna are now taking measures which our own sees no need to emulate, even though actual infections have been for most of the past few months much higher in the UK than elsewhere in Europe.

Because the vaccines have so much reduced the severity of the infection, only about 6 per cent of NHS hospital beds are currently occupied by Covid patients.

By contrast, in Austria and Germany there is now great fear that their hospitals will be overrun with unvaccinated Covid sufferers.

There are reports of corpses being stored in corridors in some hospitals in Austria, where the mortuaries are full: an ICU nurse in one such hospital told the local Press ‘you put dead corona patients in an airtight plastic bag, zip it up, and that’s it’. 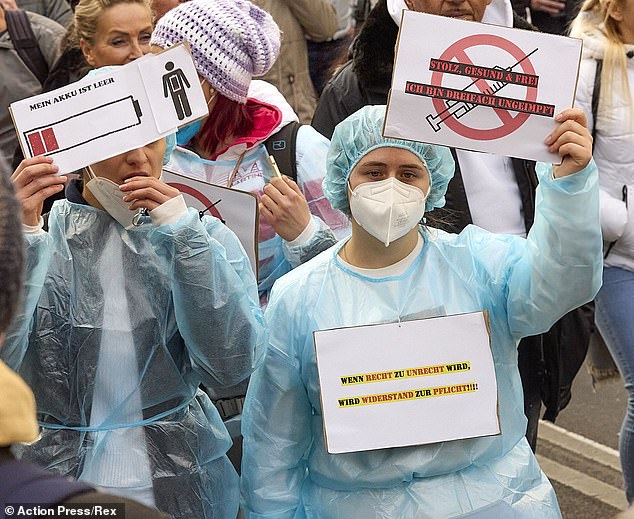 Most distressing. But the question is: why have the German-speaking nations behaved so (relatively) irresponsibly?

According to stereotype, Germans are seen as clear-thinking, commonsensical and profoundly practical.

But, at least when it comes to health matters, this is just not true. Or, to put it more precisely, a remarkably high proportion have for well over a century been ideologically charged fanatics for so-called natural medicine.

There has been an equally long tradition of hostility to vaccines (even though globally these have saved, in terms of escape from deadly disease, countless more millions of lives than all other forms of medicine combined).

According to the German medical historian Malte Thiessen, in his country: ‘Inoculation has always been about more than just the prick. It’s also always about a worldview.’

He traces it back to the Lebensreform movement of the 19th century, which preached ‘natural paths’ to health.

According to Thiessen: ‘For them, vaccines were the ‘Devil’s tool’, something artificial, chemical, getting injected into the body.

‘That helps explain the huge opposition to vaccines in Germany’s alternative circles, even today.’

A similar approach was — and is — taken by the adherents of ‘Anthroposophy’, invented (if that is the word) by the Austrian-born self-proclaimed clairvoyant Rudolf Steiner.

He died in 1925 but there are still ‘Steiner hospitals’ in Germany, and the country’s most successful drugstore chain is run by a Steiner devotee.

In a fascinating examination of the movement’s influence today, the German writer Philip Oltermann listed some of the ‘natural’ remedies offered to Covid patients in the Steiner hospitals: ‘They include moist chest compresses with powdered ginger root, mustard flower or yarrow tea.’ 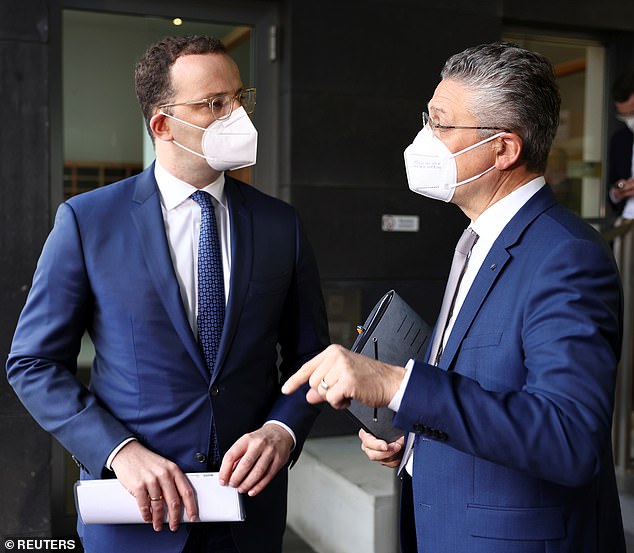 And he reported that Wala, a manufacturer of anthroposophic ‘remedies’, sells ‘homeopathic pellets from potentised meteoritic iron’ (allegedly ground-down remnants of meteorites that haven’t fully burnt up after entering the Earth’s atmosphere) as a ‘preventative against Covid-19 at Steiner care homes for disabled people’.

He quoted a spokesman from one of Germany’s Steiner hospitals in Berlin that, although there were no scientific studies of these remedies and there had ‘not been enough time’ to carry out trials, ‘we noticed that they do the people good’.

Not surprisingly, a range of the remedies offered in these hospitals are described as ‘homeopathic’.

The doctrine of homeopathy — based on the idea that the more diluted the so-called active ingredient in a natural remedy is, the more effective it becomes — was invented by a German, Samuel Hahnemann.

And Germany is the last remaining European country in which homeopathy is officially endorsed: it is covered by 70 per cent of state-backed medical insurance plans.

A German friend told me that the enormous financial power of these purveyors of quack medicine (literally so in the case of Oscillococcinum, a homeopathic ‘cure’ for colds, consisting of one part duck offal to 10-to-the-power-of-400 parts water) can be seen clearly in the content of television advertising.

At peak hours on German commercial stations, the ads for such ‘remedies’ are about as overwhelmingly prevalent as those for gambling on our own sports channels.

The peculiarly Germanic nature of this obsession is evident in the fact that vaccine uptake in Switzerland is, according to a report in the Financial Times, ‘often far lower in German-speaking cantons than in the country’s French-speaking west and Italian-speaking south’.

Similarly, the affluent 70 per cent German-speaking province of Bolzano in the Tyrol has among the lowest vaccination rates in all of Italy.

This was put into sharp perspective when the Italian government introduced mandatory vaccination for those teaching in schools.

This suggests that the Germanic resistance goes much deeper than just an aversion to directives from the state: Italians are hardly the most obedient of people when being told what to do by authority.

As for the British, outside the care sector, we have not needed to be threatened with any form of vaccine ‘compulsion’.

Moreover, since we were the fastest in Europe to implement Covid vaccines, we are now also the quickest in implementing booster jabs.

More than 21 per cent of the population has had a third dose, compared with just 6 per cent across the EU.

Given that the third dose, according to the latest research, lifts the recipients’ protection against Covid infection from 60 per cent to more than 90 per cent, this, more than anything, explains why the UK will have no need for any sort of pre-Christmas lockdown.

As I say, that is no reason for smugness. And not even for Schadenfreude (a German term for experiencing joy in the misfortune of others).

Let’s just say it’s good that health cranks are much less influential here. Because what in normal times might be harmless eccentricity is a menace during a pandemic.