A member of the Queen‘s Household Cavalry appeared to faint ahead of today’s Remembrance Sunday ceremony.

The female guard appeared to have fainted from the pavement onto the tarmac in front of shocked crowds at the Cenotaph on Whitehall in London, on November 14.

As the troops, who were dressed in full uniform, including the red plume Albert helmet, stood professionally in position ahead of the barriers, the unnamed guard was pictured on the floor. 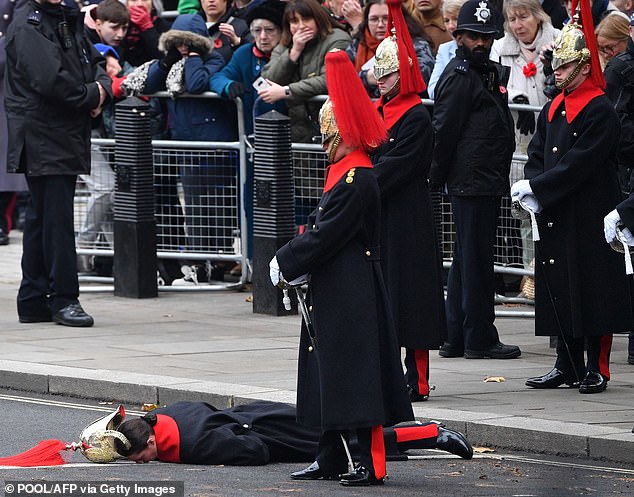 A member of the Household Cavalry appears to faint ahead of the Remembrance Sunday ceremony at the Cenotaph on Whitehall in central London, on November 14 in front of shocked crowds 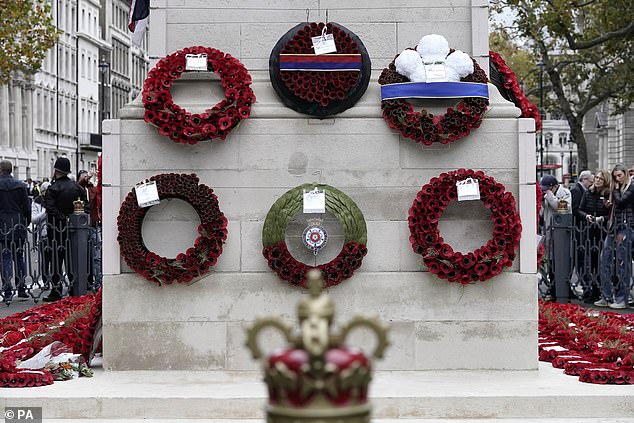 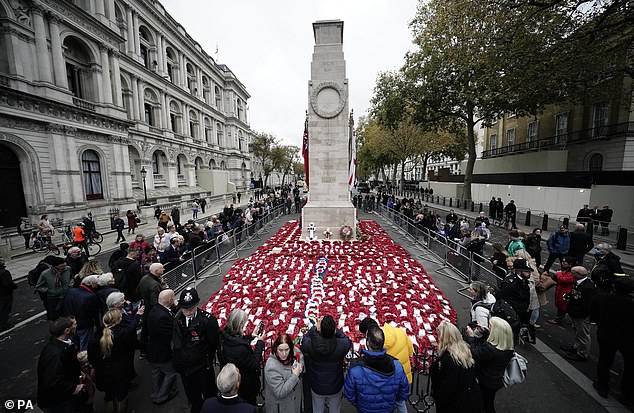 As the troops, who were dressed in full uniform, including the red plume Albert helmet, stood professionally in position ahead of the barriers, the unnamed guard was pictured on the floor

The soldier fainted before the two-minute silence at 11am but it is not yet known what caused the fall.

One other member of the Household Calvary looked down at his fellow guard, whilst the other’s looked on.

A member of the crowd helplessly looked at the collapsed soldier with her hand covering her mouth in shock.

This year saw Remembrance Sunday crowds return to pre-pandemic numbers, however the nation noticed the absence Queen, who was forced to miss the ceremony for the first time in 22 years due to a back injury, Buckingham Palace said.

The palace said the 95-year-old monarch made the decision on Sunday morning ‘with great regret’ and is ‘disappointed’ to miss the event.

Queen Elizabeth had planned on attending the Remembrance Day service at the Cenotaph in London on Sunday and it would have marked her first in-person public engagement since she was advised to rest following a night in hospital last month.

It is understood the Queen’s back sprain is unrelated to her doctor’s recent advice to rest.

Buckingham Palace said: ‘The Queen, having sprained her back, has decided this morning with great regret that she will not be able to attend today’s Remembrance Sunday Service at the Cenotaph. 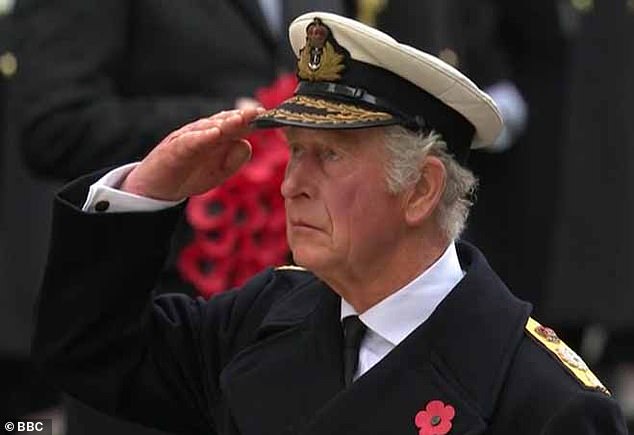 Pictured: Prince Charles lead the royal family at this year’s Remembrance Sunday ceremony at the Cenotaph in Whitehall, central London and laid a wreath on behalf of his mother the Queen after she was forced to miss the event due to a back injury 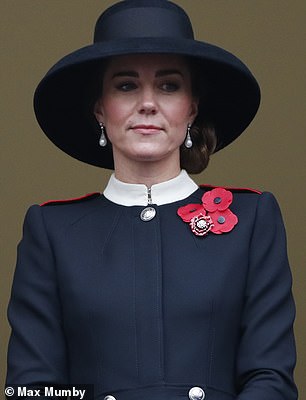 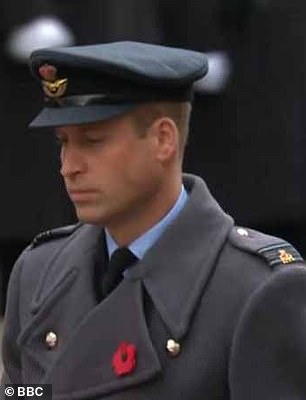 ‘Her Majesty is disappointed that she will miss the service.

‘As in previous years, a wreath will be laid on Her Majesty’s behalf by the Prince of Wales.

The event on Whitehall was given added poignancy by a return to pre-pandemic numbers of participating veterans and military, as well as onlookers.

The Prince of Wales and Prime Minister were among those laying a wreath at the war memorial for the National Service of Remembrance.

Boris Johnson, who appeared sombre as he laid a wreath, said it was a moment to ‘come together to remember those who sacrificed everything in service of our country’. 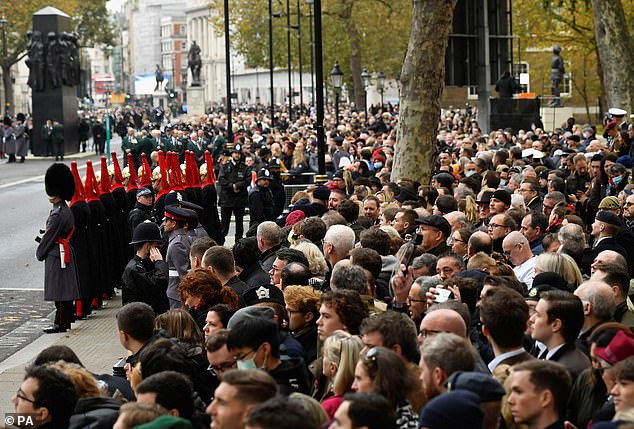 Pictured: Crowds gather ahead of the Remembrance Sunday service at the Cenotaph, in Whitehall, London, this morning 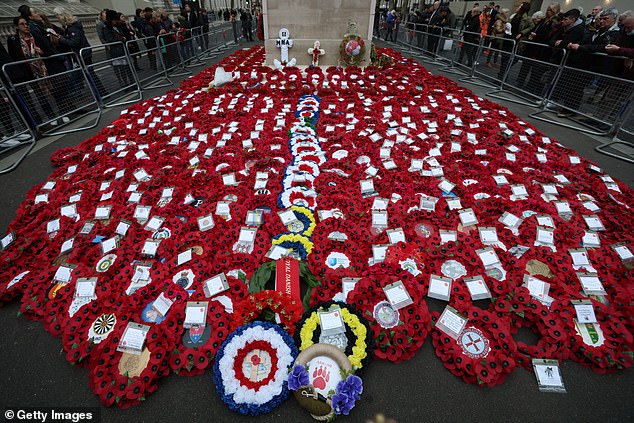 Only the rustling of leaves and the chirping of birds could be heard as thousands of people held the two-minute silence at 11am in honour of all those who have lost their lives in conflict.

The Duke of Cambridge, Earl of Wessex and Princess Royal also laid wreaths at the memorial.

Looking on from a balcony of the Foreign, Commonwealth and Development Office building were the Duchess of Cornwall, Duchess of Cambridge and Countess of Wessex. 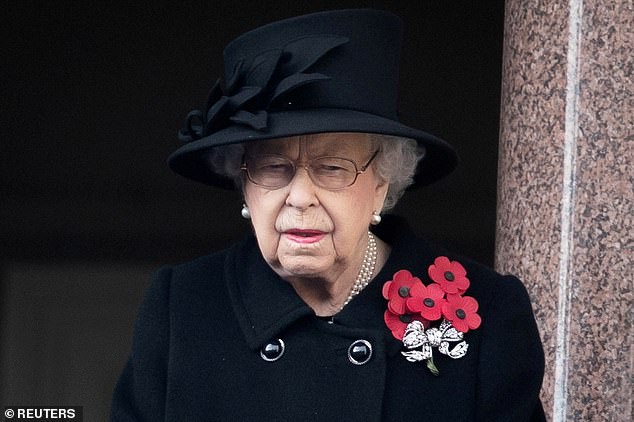 Buckingham Palace said the Queen was forced to miss the Remembrance service due to a back injury. Pictured last year

The Queen is said to be deeply disappointed to miss the service – which she regards as one of the most significant engagements of the year – and she hopes to continue as planned with her schedule of light official duties next week.

The monarch, who served in World War II as a army driver and mechanic, was due to watch the service at the war memorial in central London from the balcony of the Foreign, Commonwealth and Development Office building.

Her attendance at the service was confirmed by the palace on Thursday after she was ordered to rest by royal doctors just over three weeks ago and spent a night in hospital on October 20 undergoing preliminary tests.

The palace had previously said it was the Queen’s ‘firm intention’ to attend the annual wreath-laying service in Whitehall.

The monarch, who lived through the Second World War as a teenager, is head of the armed forces and attaches great importance to the poignant service and to commemorating the sacrifices made by fallen servicemen and women.

She started the Second World War as a schoolgirl but ended it in uniform as a junior commander with the Auxiliary Territorial Service.