The former world’s fattest man has revealed how he took an overdose as a ‘cry for help’ after putting on 20 stone in lockdown.

Paul Mason, 61, from Ipswich, tipped the scales at 80 stone at his heaviest, before dropping down to 19 stone after finding love and having a gastric bypass operation in 2010.

But when his relationship with American Rebecca Mountain – 13 years his junior – broke down, he returned from the US to the UK and started piling on the pounds.

And after his weight ballooned back up to 39 stone six months ago, Paul tried to tried to take his own life after getting to his ‘wits’ end’ and becoming ‘desperate’. 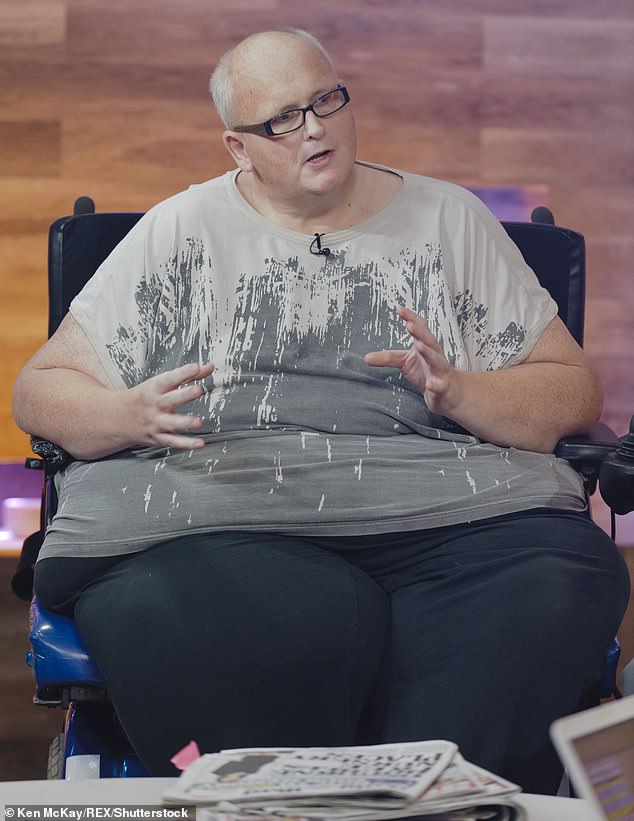 Paul Mason, 61, (seen in 2011) from Ipswich,  has revealed how he took an overdose as a ‘cry for help’ after putting on 20 stone in lockdown

Speaking to The Mirror, Paul said: ‘Nobody was listening, nothing was happening, I could see myself slipping back into the bad old days so it was a cry for help.

‘When you are at your wits’ end in pain all day, all night, you become desperate’.

Paul revealed that he took a cockail of his own prescription drugs, before instantly regretting it and phoning an ambulance.

However the lift in his building was broken, and due to his size two fire engines needed to be called before eight men proceeded to carry him out in a sling.

Paul was forced to spend two weeks in hospital before making a full recovery.

He concluded: ‘It was all very nasty. I just really needed some help and it was the only way I could think to get some help’.

Paul is now focused on recovering through therapy and vows to ‘get through it’. 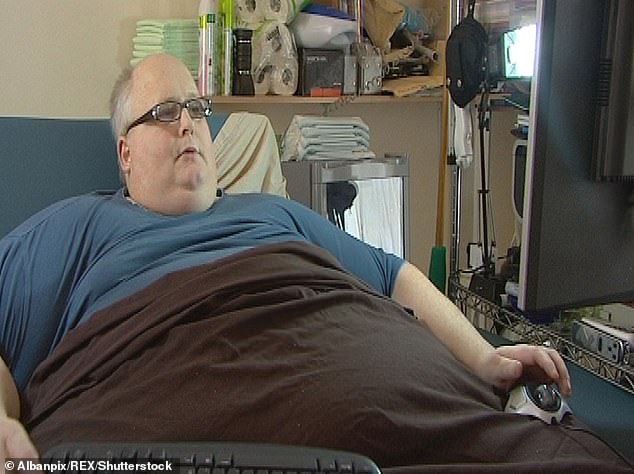 Paul, who found fame on TLC’s World’s Fattest Man, said at his heaviest he would take out his own teeth as they crumbled from his diet of 40 chocolate bars a day. Pictured: Paul in 2009 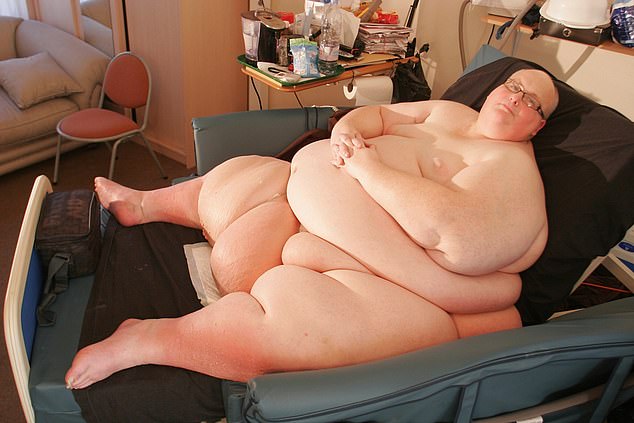 Paul previously hit headlines when he revealed a hospital had planned to cremate him in an abattoir designed for animals if he died because they would’ve been unable to handle his size themselves.

Paul said he was ‘disgusted’ by the plans drawn up during his three years living on a hospital ward, which included giving him an animal cremation if he died.

The former postman told ITV in new documentary The World’s Fattest Man: 10 Years On, that he experienced inhumane treatment while battling his escalating weight.

‘I thought it was disgusting. I couldn’t believe they were doing that,’ he added.

Paul explained that at his heaviest it became increasingly difficult to leave the house and as his diet of 40 chocolate bars a day made his teeth crumble, he would pull the cracked ones out himself, according to the Sun.

He claimed that he was able to kill a nerve by heating needles up and sterilising his mouth before inserting the needle straight into his gum. 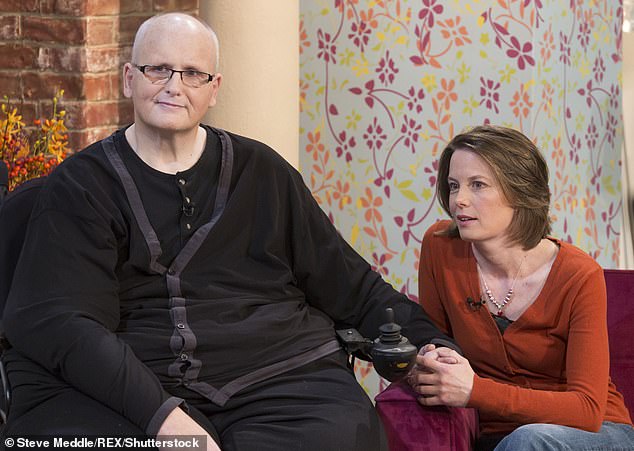 The 60-year-old estimates that he removed at least a dozen of his own teeth using this method.

Since finding fame on TLC’s World’s Fattest Man, Paul has seen his weight yo-yo while struggling to bring his eating under control.

He was able to shrink down to 19 stone after a successful gastric bypass surgery in 2010 and soon moved to the United States to be with Rebecca Mountain – 13 years his junior.

While living in the States, Paul underwent operations to have his excess skin removed.

However, he soon ballooned again to over 30 stone after gorging on pizza when his relationship with Rebecca came to an end.

The basic health insurance he could afford in the US was inadequate for his state of health, Paul previously told the Mirror

Before moving to join Ms Mountain, an eight stone vegetarian, in Massachusetts in 2014, Paul’s care was costing UK taxpayers £100,000-a-year and an estimated £1.5million in total. 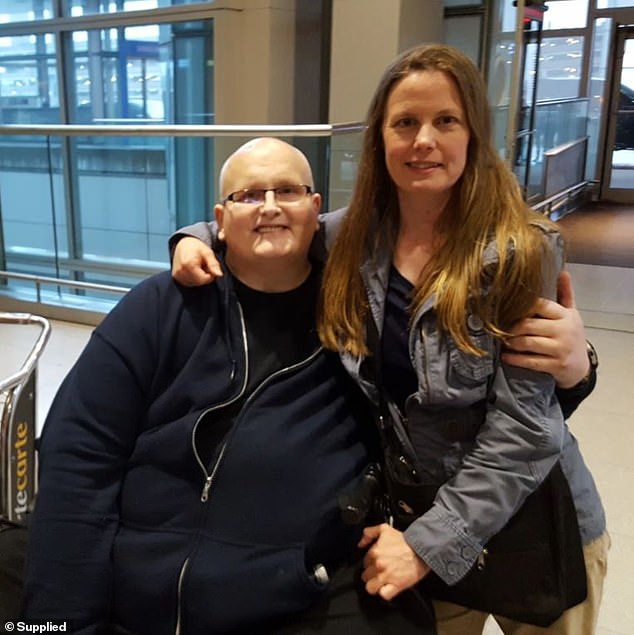 In a 2002 medical emergency, fire crews had to take out a window and brickwork so a forklift could take him out of the house and to hospital in a five-ton ambulance specially built for obese people.

By 2009 he needed a life-saving operation after putting away 20,000 calories a day, including three family-sized takeaway meals an evening.

Then in 2010 he had gastric bypass surgery that shrunk his stomach to the size of an egg.

In 2013 Ms Mountain contacted Mr Mason after seeing a documentary about him.

The pair got engaged and in May 2015 he had four stone of excess skin cut from his body in a nine-hour procedure in New York.

The NHS had refused to do the £30,000 operation until his weight had been stable for two years.

Despite him getting down to 19 stone, the couple called off their engagement in September 2015.

Paul turned to stealing from supermarkets to fund his consumption and was fined $50 during a US court appearance in November 2018.

He returned to the UK ‘for the assistance I need to get my life back on track’ in 2019.

At the time Paul claimed that he needed multiple operations, including new knees, a hip and numerous hernia operations, costing the NHS over £100,000. 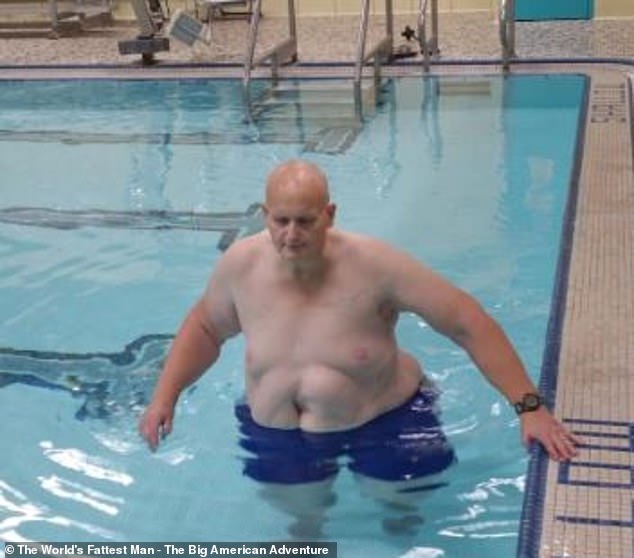 Paul returned to the UK in 2019 after almost five years of living in the United States, claiming that he needed to get his life back on track