A French trawler that went down off the coast of Cornwall, killing five crew, sank after snagging on the seabed, an inquest has found.

The fate of the Bugaled Breizh has been shrouded in mystery since it sank off the Lizard Peninsula in 2004 in relatively favourable conditions and with no apparent defects to the vessel.

The bodies of skipper Yves Marie Gloaguen, 45, and Pascal Lucien Le Floch, 49, were found in the initial search and rescue operation and brought back to the UK.

The body of a third man, Patrick Gloaguen, 35, was recovered during a salvage operation to raise the Bugaled Breizh but was taken to France, and his death was not subject of the inquest.

The bodies of the two remaining crew members, Georges Lemetayer, 60, and Eric Guillamet, 42, were never found.

It has long been suggested that a submarine may have become entangled in the Bugaled Breizh’s trawling gear, causing it to capsize. 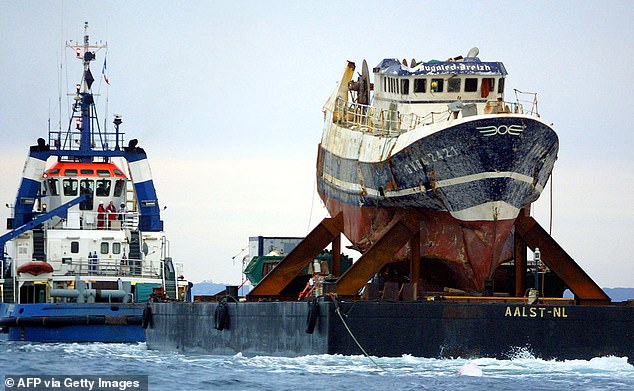 The Bugaled Breizh, pictured right, sank off the coast of The Lizard in 2004 in relatively calm conditions amid claims it had been sunk by a submarine 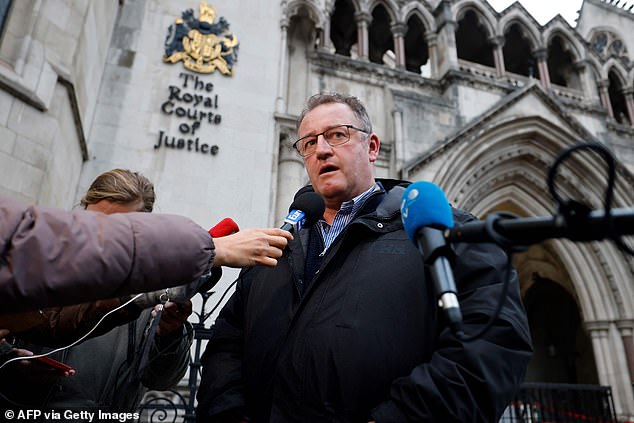 Relatives of the crew including Thierry Lemetayor, son of Georges Lemetayer, who died on board the Bugaled Breizh were in the High Court in London today where the inquest heard the relatively light damage to the vessel’s trawling gear was inconsistent with entanglement with a powerful military submarine

But in 2016, France’s top judicial court confirmed the closure of its investigation after finding no evidence to support the theory.

But the inquest heard the relatively light damage to the vessel’s trawling gear was inconsistent with entanglement with a powerful military submarine.

Judge Nigel Lickley QC, who acted as coroner for the inquest at the High Court in London, said it was ‘wholly fanciful’ that an unknown submarine had caused the sinking.

‘The Bugaled Breizh had disappeared in a few minutes leaving very little behind. I can understand how thoughts can develop afterwards,’ Judge Lickley said.

‘I have no doubt that the fact a submarine was seen at the scene – doing nothing other than assisting in the search – caused speculation to run as to a submarine being involved in the sinking.’

He said Dutch, German and British submarines were operating in the English Channel, but were ‘many miles away’ at the time of the sinking.

‘For the avoidance of doubt, I am satisfied that no other identified Allied submarine of any type or class was in the area at the time and that includes submarines from the US,’ he said.

‘So far as the idea still persists today, I reject it as wholly fanciful and unfounded.’

He added: ‘I am satisfied that no non-Allied submarine was in the vicinity of or anywhere near the Bugaled Breizh when she sank.’

Judge Lickley also ruled out a collision with another vessel, a hard snag or mechanical failure.

‘I am satisfied the cause of the sinking was a soft snag of the trawl rig on the seabed, that in combination with other factors, caused the Bugaled Breizh to heal to port, take on water, move to starboard causing the crew quarters to flood and she sank rapidly,’ he said.

He gave the cause of death for Mr Le Floch and Mr Gloaguen as drowning and recorded conclusions of accident.

The inquest heard that maritime investigators examined evidence gathered by France’s marine accidents investigation body and found one of the vessel’s trawl doors – two sheets of metal used to keep the mouth of the net open – had become buried in sediment and mud close to a depression in the seabed.

It was likely the weight on the port trawl door had put a huge amount of pressure on one of the cables, known as warps, connecting the net to the boat.

The pressure may have caused the vessel to lean heavily, allowing a large volume of water to be shipped on to the main deck.

Claims a submarine had caused the sinking had been investigated by the Royal Navy, the court heard.

Andrew Billings, who led the investigation, said he had found no evidence any submarine of any flag was within five nautical miles of the trawler.

A senior naval officer told the inquest it would be ‘unthinkable’ for a British or allied submarine crew to falsify records about a vessel’s location.

Commander Daniel Simmonds, who is currently in charge of daily operations of all UK submarines, said such a move ‘would absolutely erode the trust at the highest levels between allied partners’.