Gunman, 14, shot dead schoolboy, 15, outside his home as a five-strong gang of masked youths knifed him in a ‘short and brutal’ assault, court hears

By Gregory Kirby For The Daily Mail 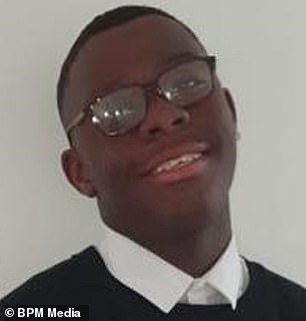 Keon Lincoln, 15, (pictured) was blasted twice by a 14-year-old gunman and stabbed ‘with large knives’ during a 30-second onslaught in January this year, prosecutors said

A schoolboy was shot and hacked to death outside his home during a ‘short and brutal’ assault involving a gang of five masked youngsters, a court heard yesterday.

Keon Lincoln, 15, was blasted twice by a 14-year-old gunman and stabbed ‘with large knives’ during a 30-second onslaught in January this year, prosecutors said.

Kieron Donaldson, Tahjgeem Breakenridge, and Michael Ugochukwu, all 18 and from Birmingham, are suspected of murdering the schoolboy in the Handsworth area of the city alongside two other suspects, aged 14 and 16, who cannot be named for legal reasons. All five deny murder.

CCTV cameras captured the hooded mob unleashing the attack, which continued even after Keon tried to get up and run away, the trial heard.

Prosecutor Michael Burrows QC told Birmingham Crown Court: ‘He [Keon] was shot at whilst he was on the ground. Still, the group continued to attack him, stabbing and hacking at him with large knives.

‘Eventually, the group ran away and got back into a white Ford S-Max and that car was driven away from the scene.’ Footage showed that one suspect shot Keon twice including once in the stomach which later killed him, the jury was told.

Prosecutors allege all of the defendants except Donaldson had got out of the S-Max along with a fifth male, while a sixth man remained in the car and turned it round in the street.

The getaway vehicle, which had been stolen and was on false plates, later crashed. Left behind was forensic evidence including a hunting knife.

Donaldson is not thought to have been present at the murder scene but is suspected to have ‘helped and supplied weapons’.

The teenager bought ten hunting knives, two survival knives and two machetes between October last year and this January, and then supplied them to others, the court heard. Mr Burrows said the prosecution could not say what the precise motive for the attack was. He added that the attack was ‘planned’, and also said the suspects made sure that their phones did not betray their movements. 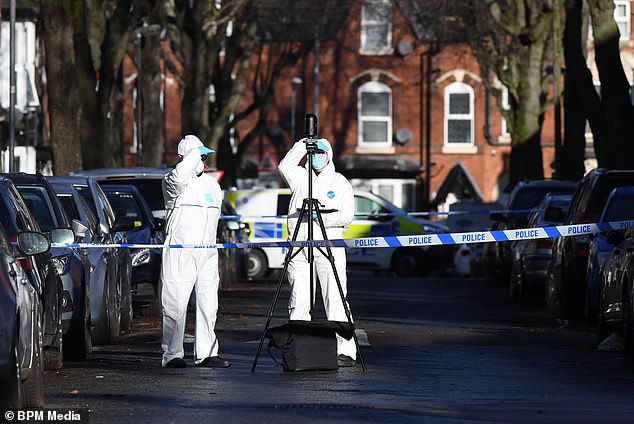 Keon Lincoln was shot and hacked to death outside his home during a ‘short and brutal’ assault involving a gang of five masked youngsters, a court heard yesterday. Pictured: Police and forensics at the scene of the incident on January 22, 2021

The 14-year-old defendant, from Birmingham, denies both murder and possessing a handgun with intent to endanger life.

Breakenridge, Ugochukwu and the 16-year-old, from Walsall, also deny unlawful possession of a knife during the attack on January 21.

Opening the case for the Crown, Mr Burrows said: ‘The incident was captured on CCTV. It shows five people involved in the attack.

‘They all wore their hoods up so their faces could not be seen.’

He added: ‘The prosecution say the gunman was … and is 14 years old.’ Jurors heard the 14-year-old was arrested a week after the death and was said to know Keon though ‘they had never fallen out’.