By James Robinson for MailOnline

The cost of a curry could be about to rise in the UK due to soaring wholesale spice prices, industry bosses have today warned.

Ingredient suppliers have told food manufacturers they plan a 50 per cent price hike on spices used in Indian dishes, including coriander and cumin.

Food firms say the cost of garlic and ginger has already ‘shot up’ by 50 per cent in the past six months.

Other ingredients such as spinach, green peppers and chillies have also risen as much as 25 per cent, bosses say.

Meanwhile, rising wage costs sparked by a shortage of chefs, spiralling utility bills and transportation costs – which new figures today suggest could have risen by 30 per cent in the last two years – are also eating into profits of Indian restaurants, owners say.

It means popular dishes such as Chicken Tikka Masala, Butter Chicken and Saag Aloo could be the next victim of inflation.

One restaurateur told MailOnline that prices could rise by as much as £1 per dish. 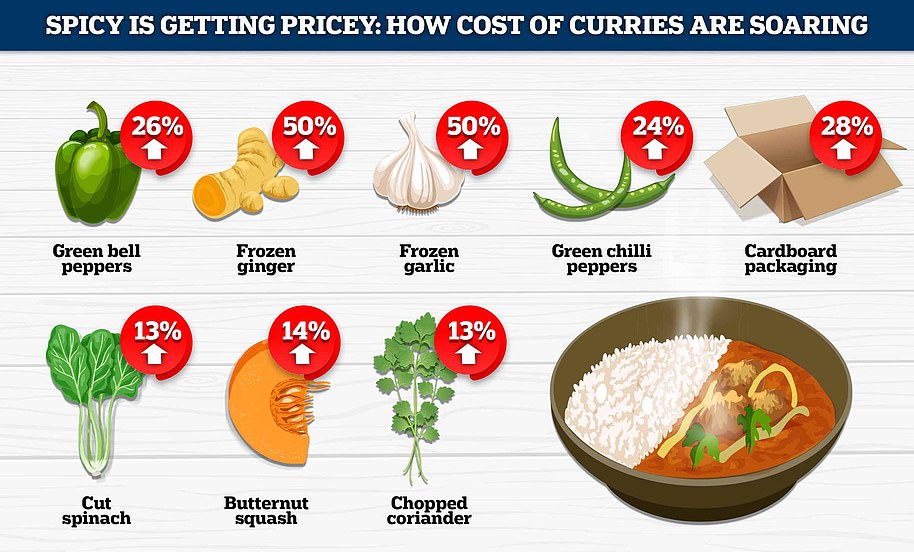 Thomas Cropper, managing director of ready meals and food-to-go brand, Tuk in Foods, told trade magazine, The Grocer, that he had been emailed by an ingredient supplier who said they ‘wanted to put a 50 per cent increase on the price of our spices’. He also told MailOnline that other ingredients such as peppers, coriander and spinach had all gone up in price 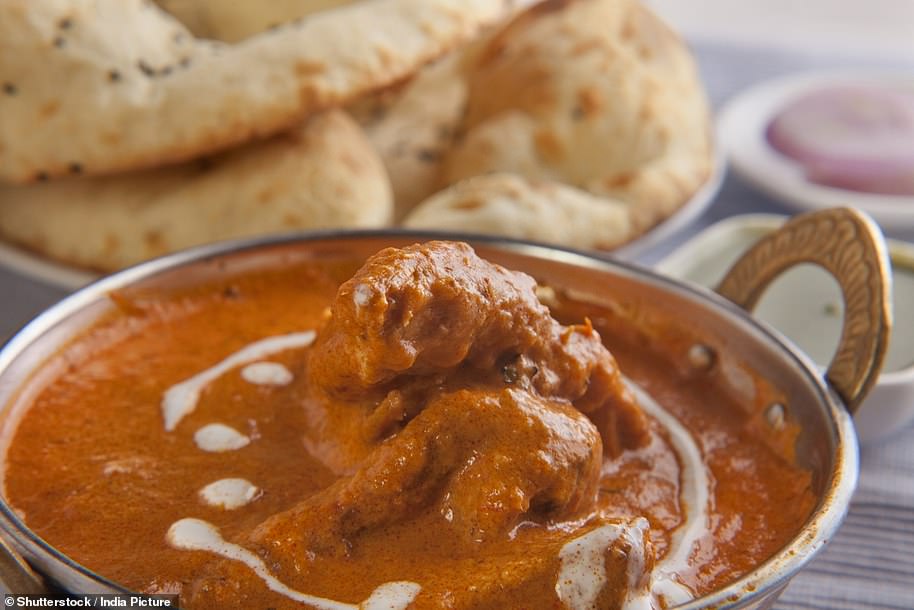 Popular dishes including Chicken Tikka Masala, Butter Chicken (pictured) and Saag Aloo could be the next victim of inflation, due to an increase in the spice prices 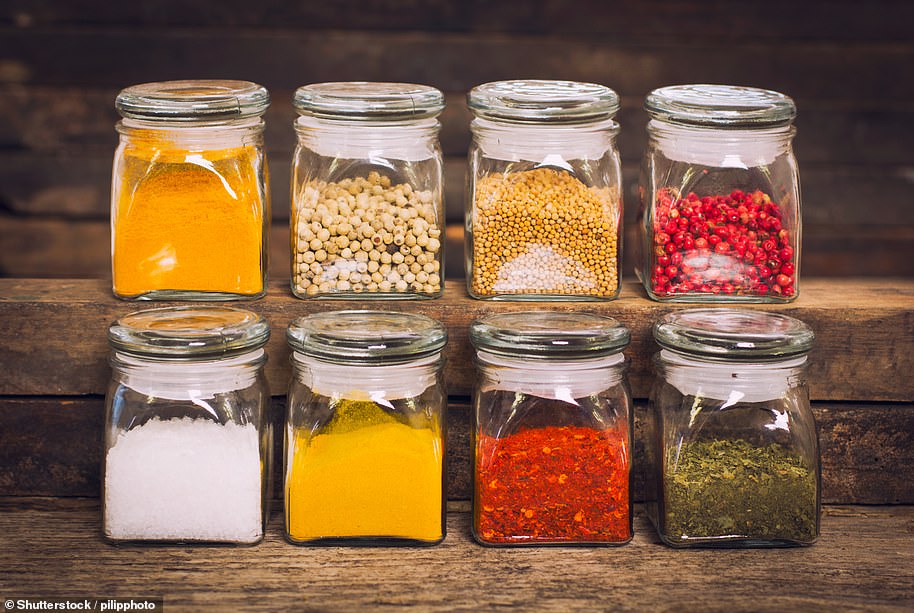 Ingredient suppliers have reportedly told food firms that they plan a huge spike on the price of spices (library image). Food suppliers say the cost of garlic and ginger have already gone up 50 per cent in the past six month

Yawar Khan, who owns a restaurant and is the chairman of The Asian Catering Federation (ACF), told MailOnline: ‘Prices are going up for a lot of ingredients. Things like cooking oil we used to pay £19 (for a 20litre drum) and now it is £24.

Mr Khan also said Indian restaurants, like the rest of the hospitality industry, was also suffering from a shortage of chefs and other skilled workers.

He said: ‘Restaurants are having to pay more to be able to get staff to stay open.

‘They are paying around 15 to 20 more in salaries. Restaurants then have to pass all of these extra costs to the customers in order to survive.’

Asked how much he expects curry prices to rise, Mr Khan, whose ACF group are behind the Asian Restaurant Awards, said: ‘I think somewhere between 40p to £1.’

But he added: ‘Much of the public are wedded to the idea that curry has to be cheap and that drives down quality. But I think the days of a cheap Friday night curry are coming to an end.’

Meanwhile, Thomas Cropper, managing director of ready meals and food-to-go brand, Tuk in Foods, told trade magazine, The Grocer, that he had been emailed by an ingredient supplier who said they ‘wanted to put a 50 per cent increase on the price of our spices’.

He said it was ‘inevitable’ that a spike in ingredient costs would be pushed on to customers.

Mr Cropper, whose business is based in Leicester and has recently signed a £3million deal to supply products to Co-Op, told the magazine: ‘People cannot produce food at the same cost as two years ago, so inevitably consumers are going to pay more.’

He told MailOnline that Indian restaurants and takeaways would likely be impacted, but not to the same extent as businesses like his.

Mr Cropper added: ‘With a business like ours 30 per cent of the costs is ingredients, whereas restaurants will be around 10 per cent, so it will still have an impact, but it won’t be as pronounced.’

Another supplier The Grocer they had ‘definitely seen an increase in costs of spices’ with many saying it is down to the hike in transportation costs and a breakdown in the supply chain.

He said: ‘The UK spice market, like many other markets, has been hampered by freight issues and Brexit.

‘Then you add weather related issues in some of the producing countries and rising costs of packaging and there is obvious pressure on importers.’

It comes as UK inflation made its biggest jump on record in August, according to the Office of National Statistics (ONS).

The stats group said the Consumer Prices Index measure of annual inflation rose to 3.2 per cent in August, up from 2 per cent in July. 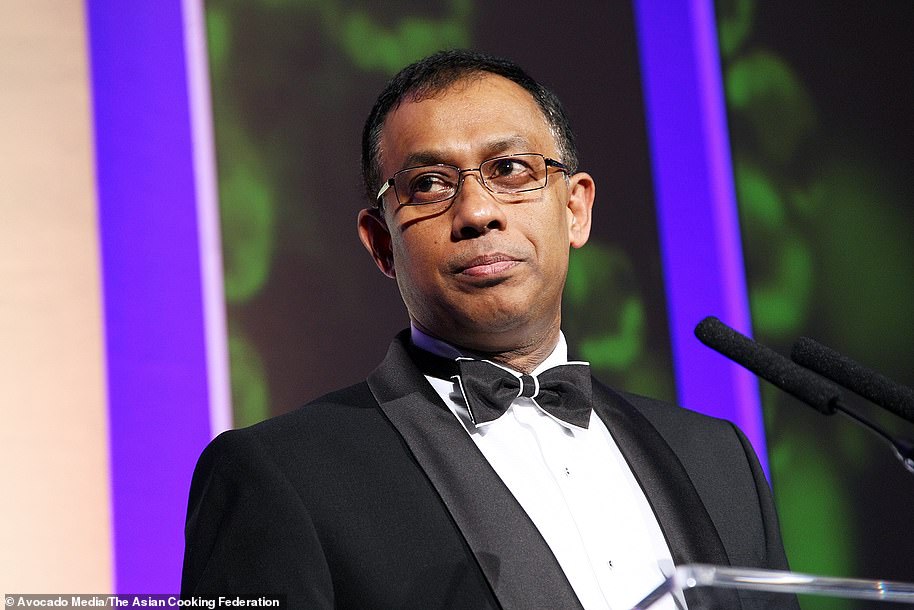 Yawar Khan, who owns a restaurant and is the chairman of The Asian Catering Federation (ACF), told MailOnline: ‘Prices are going up for a lot of ingredients. Things like cooking oil we used to pay £19 (for a 20litre drum) and now it is £24.’ 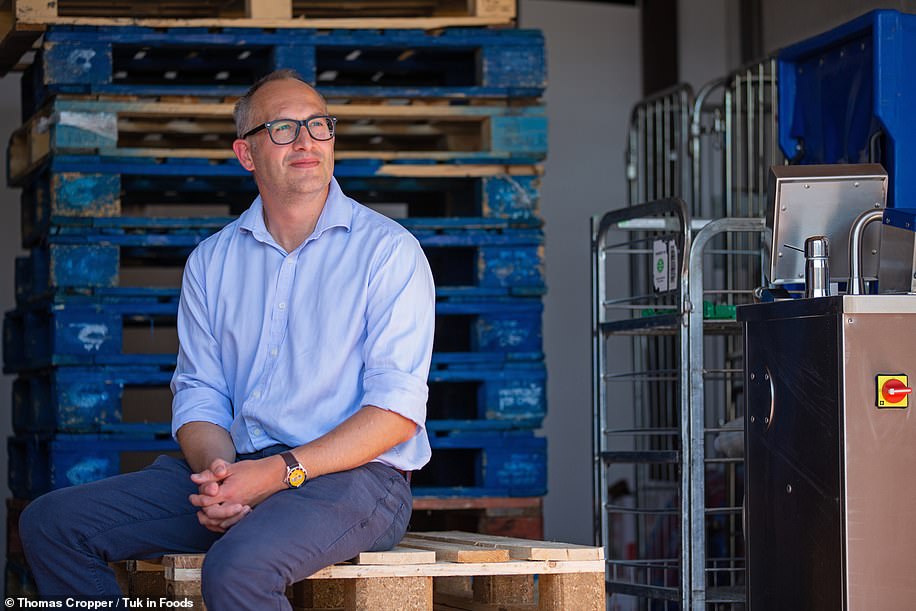 Thomas Cropper (pictured), from Tuk in Foods, told MailOnline that Indian restaurants and takeaways would likely be impacted, but not to the same extent as businesses like his

This is the highest rate since March 2012. However, price rises dipping slightly in September.

The increase in the cost of living fell to 3.1 per cent in the year to September, down from 3.2 per cent in August.

It comes amid rising petrol costs, the threat of higher gas bills this winter and an HGV driver shortage which has driven up transport costs and has lead to the threat of empty shelves this Christmas.

A combination of spiralling global natural gas prices, the impact of Covid, and a labour force shortage, partly caused by Brexit, have been blamed.

As part of the UK labour shortage, there is a crippling shortage of staff in the hospitality industry, which is causing restuarants to shut.

Chief executive of pan-Asian restaurant chain Wagammama, Thomas Heier, told the Press Association, it was facing difficulties at 30 of its 147 sites.

‘We’ve seen a reduction in our EU workforce in particular, but the other thing we’re seeing is increased competition from logistics and delivery firms who are struggling with an increased number of vacancies.’

UKHospitality, an industry lobby group, has described the shortage of staff as ‘critical’.

Data from the Office for National Statistics showed that there was a 10 per cent vacancy rate in the hospitality sector, equivalent to 210,000 roles.

It comes as today a new marketplace index has revealed how the UK road transport market pricing hit a 33-month record high in September 2021.

The TEG Road Transport Price Index – which tracks changes in the pricing of road transport services – found the road transport market experienced the highest price-per-mile average over 33 months in September 2021 – a 30 per cent increase from January 2019.

However, the index is said to have stabilised in October.

Lyall Cresswell, CEO of Transport Exchange Group, says: ‘Demand for freight transport drivers and fleet capacity is unprecedented, with various factors meaning it will remain high for quite some time.’

Kirsten Tisdale, director of logistics consultants Aricia Limited and Fellow of the Chartered Institute of Logistics & Transport, says: ‘Any price index is influenced by several factors: underlying cost changes; availability/capacity of the market; and demand for the service.

;The key influencers for the TEG Road Transport Price Index have often been changes in the cost of diesel and demand levels for road transport.

‘Driver pay will also have been an element contributing to the rise from Spring 2021 onwards, but it looks as if potential overheating of transport rates is now abating, although there may yet be further pent up demand.’

Last week the Bank of England said how Britons were already seeing inflation ‘biting’ into their household incomes and will continue to be hit hard this winter.

Andrew Bailey said he was ‘very sorry’ about the situation as he warned higher energy prices could become permanent due to the switch away from coal to tackle climate change. 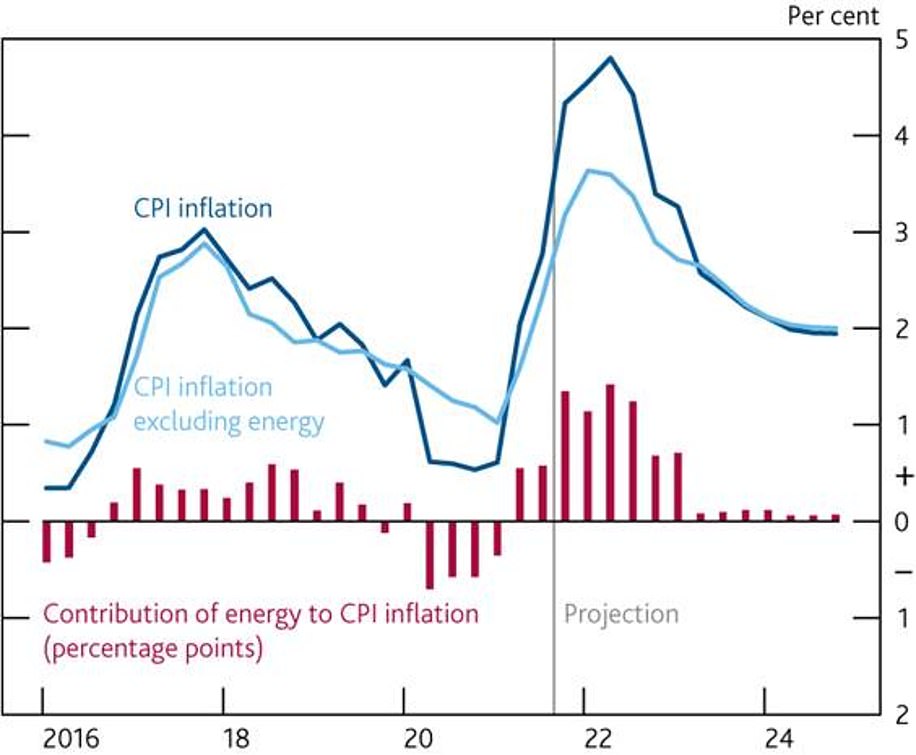 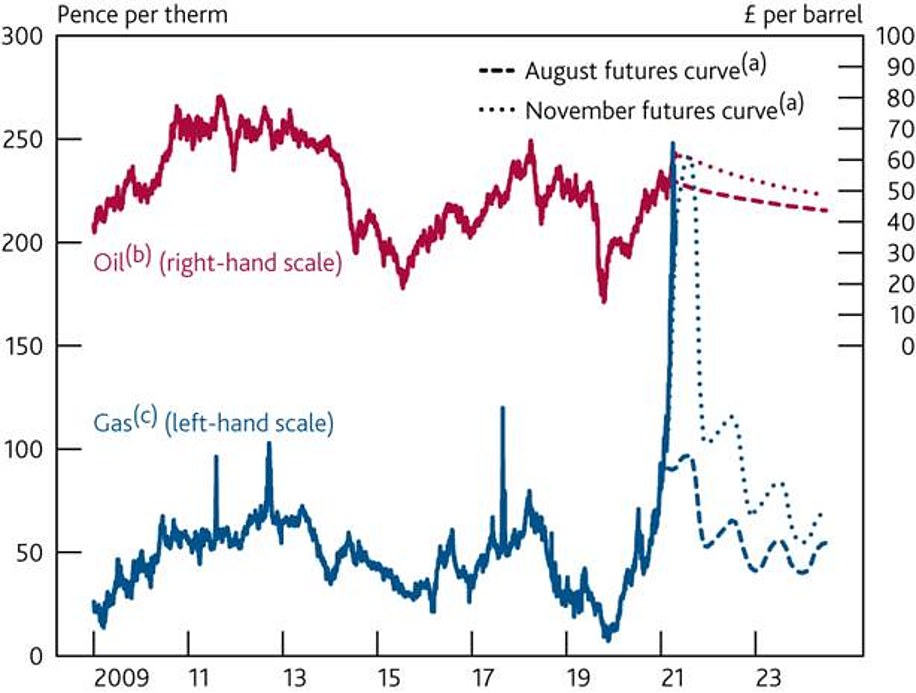 Wholesale oil and gas prices have risen substantially during 2021, as shown in this graph from the Bank

‘Inflation is clearly something that bites on people’s household income. I’m sure they’re already feeling that in terms of prices that are going up,’ he told BBC Radio 4’s Today programme.

‘I’m very sorry that’s happening. None of us want to see that happen.’

Mr Bailey predicted the cost of energy – particularly gas – was the main factor behind inflation and said prices could stay at a higher level due to the global switch to net zero.

‘So it is possible that some of what we’ve seen with gas prices is already climate change having effect if there’s a switch out of coal.

‘Then part of it would be permanent higher prices, not higher inflation but a level change in prices.’

Meanwhile, mortgage costs are still soaring even though the Bank of England voted against an interest rate rise yesterday.

The decision to keep rates at a record-low 0.1 per cent offered a reprieve to the 2million homeowners with variable rate mortgages who will not face immediate bill increases.

But experts warned it is only a matter of time before rates do go up – with a hike still possible before Christmas.

In the week since the Budget, lenders have pulled their cheapest fixed deals in anticipation of an upwards march. And just hours before the Bank’s vote, they continued to hike their rates.

The Bank of England today chose to keep interest rates at the current record low of 0.1 per cent after a ‘knife edge’ decision 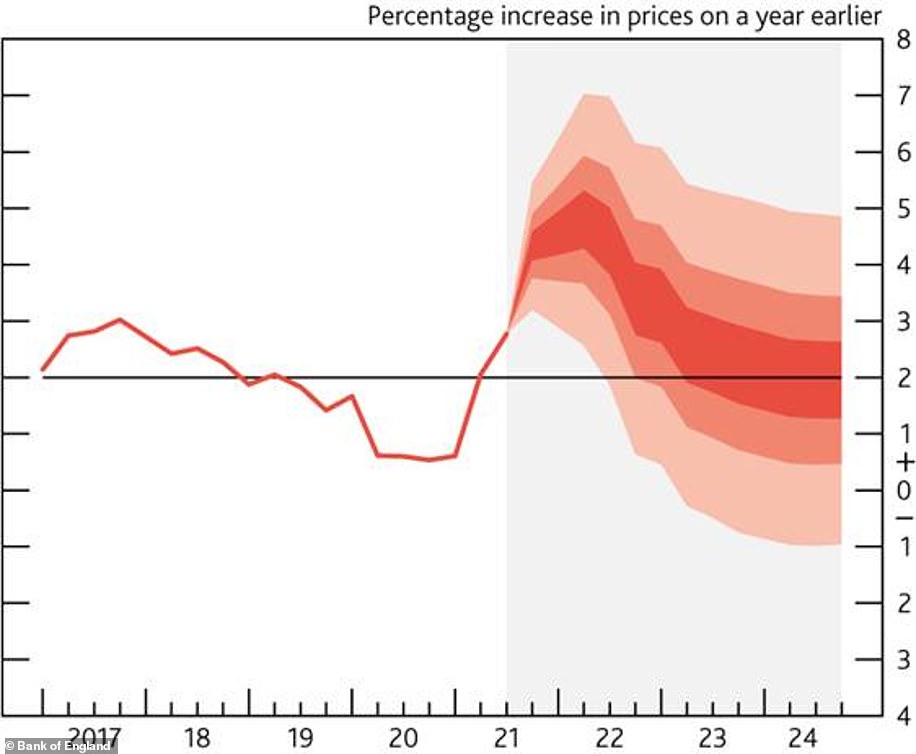 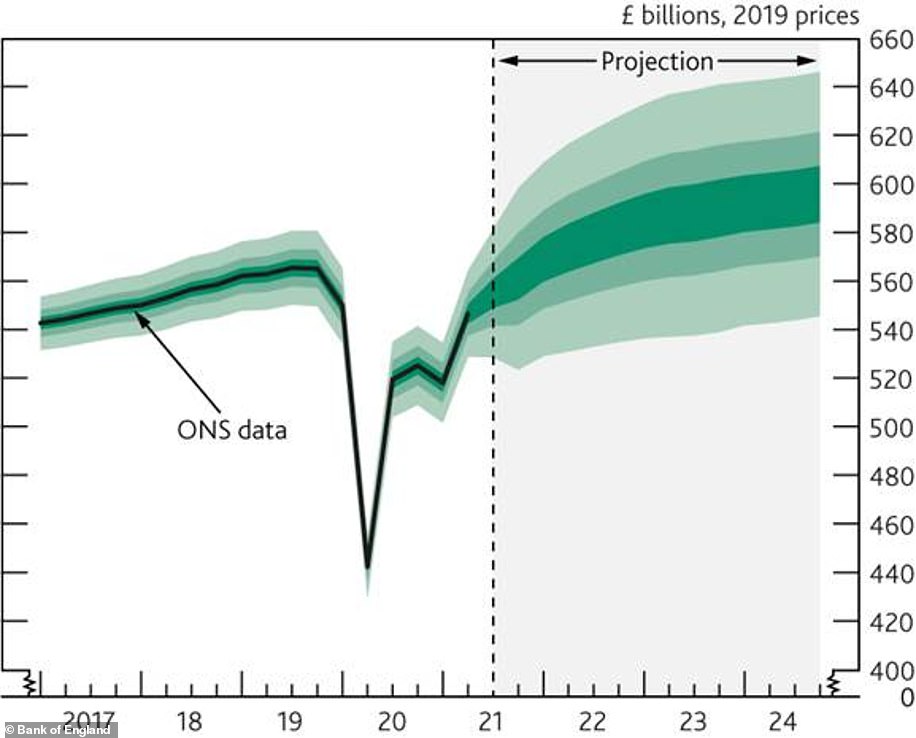 Banks and building societies have announced 42 different sets of rate changes with hundreds of deals now more expensive, according to mortgage broker L&C. Some have moved up rates more than once, with loans priced below 1 per cent disappearing fast.

Higher mortgage costs will be a major blow for struggling households whose budgets are already being squeezed by soaring prices and looming tax hikes.

But for millions of savers who have suffered more than a decade of rock-bottom rates, the decision to keep the base rate at 0.1 per cent came as an enormous disappointment.

At present, there is not a single account that protects savers’ cash against rising prices.

There is £965.7billion in easy access accounts earning an average of 0.1 per cent, according to the Bank of England.

With inflation predicted to hit 5 per cent next year, savers stand to lose out on £47.3billion of spending power.

The LABOUR MPs with second jobs: David Lammy has earned £140,000 in three years