President Ebrahim Raisi, center, waves to journalists as he is surrounded by group of l

Iran’s Foreign Ministry warned arch-foe Israel on Thursday not to take military action against the Islamic Republic after the Jewish state threatened Tehran over a deadly tanker attack.

A British security guard and a Romanian crew member were killed in what the United States, Britain and the vessel’s operator Zodiac Maritime said appeared to be an Iranian drone strike.

“We state this clearly: ANY foolish act against Iran will be met with a DECISIVE response,” Khatizbadeh said. “Don’t test us,” he warned.

Earlier on Thursday, Defense Minister Benny Gantz said Israel is prepared to militarily engage directly with Iran. Asked in an interview with the Ynet news site whether Israel was ready to strike in Iran if need be, Gantz responded simply, “Yes.”

Israel, he added, is nevertheless focused on an effort to mobilize the international community to rein Tehran in, “because we can’t tag Iran as solely an Israeli problem and absolve the rest of the world from this issue.” 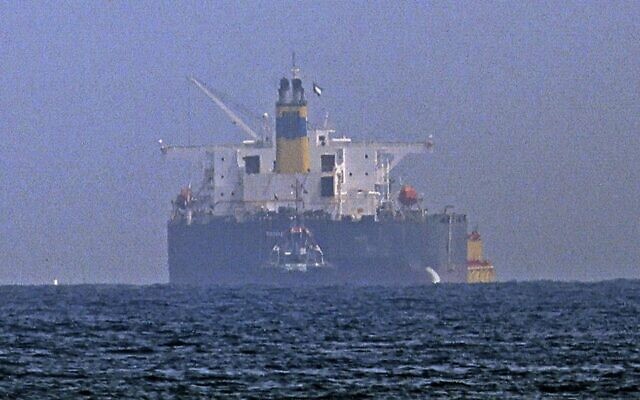 Tug boats are moored next to Israeli-linked tanker MT Mercer Street, off the Fujayrah port in the United Arab Emirates, on August 3, 2021. (Karim SAHIB / AFP)

On Tuesday, Prime Minister Naftali Bennett said his government was “working on enlisting the world” in response to the attack, but warned “we also know how to act alone.”

“The Iranians need to understand that it is impossible to sit peacefully in Tehran and, from there, ignite the entire Middle East. That is over,” Bennett said.

Both the United States and Israel have said their intelligence assessments of the July 29 incident concluded that an Iranian drone attacked the ship, charges that Iran denies.

On Tuesday, the crew of a Panama-flagged asphalt tanker off the coast of Oman reportedly managed to thwart an attempt by Iranian gunmen to take control of their ship and divert it to the Islamic Republic.

Five or six Iranian operatives stormed the Asphalt Princess, but the crew onboard quickly sprung to action and sabotaged the ship’s engines so that it could not move any further, UK officials told British daily The Times on Wednesday. 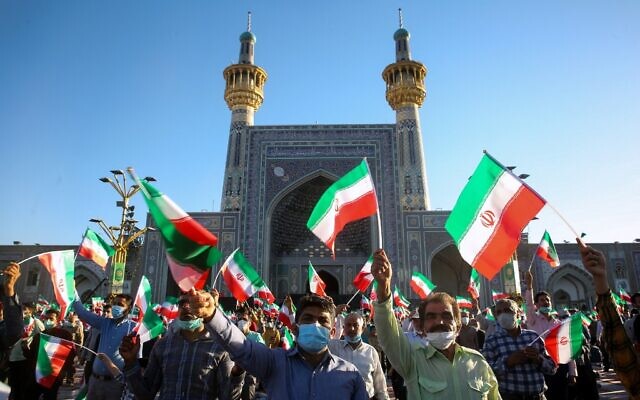 Supporters of Iran’s President-elect Ebrahim Raisi cheer at the Imam Reza shrine in the city of Mashhad in northeastern Iran, on June 22, 2021. (Mohsen Esmaeilzadeh/ISNA News Agency/AFP)

There have been several reported attacks on Iranian ships in recent months that Tehran has linked to Israel.

In March, Iran said it was “considering all options” after an attack on a cargo ship in the Mediterranean that it blamed on Israel.

In April, Tehran said its freighter Saviz was hit by an “explosion” in the Red Sea, after media reports said that Israel had targeted the ship.

The New York Times reported that it was a retaliatory attack by Israel for “Iran’s earlier strikes on Israeli ships.” Iran has also accused Israel of sabotaging its nuclear sites and killing a number of its scientists.