'Killjoy' council stops children from playing football in park by blocking goal with a £3,500 fence
Advertisement

Furious parents have slammed a ‘killjoy’ council for stopping children from playing football in a local park by blocking a goal with a £3,500 fence.

Brian Reeby, who has lived alongside Headweir Road park in Cullompton for decades, says he painted the outline of a goal on his garage for children to play football with.

However, local residents are furious at Mid Devon District Council after it erected a diagonal rail alongside the corner of the park against the outline of the goal.

It follows a a row between children using the park and a minority of neighbours who ‘don’t like balls being kicked over to their garden’.

Mr Reeby said the police were called to the park on one occasion, before the council installed the new rail and higher fencing. 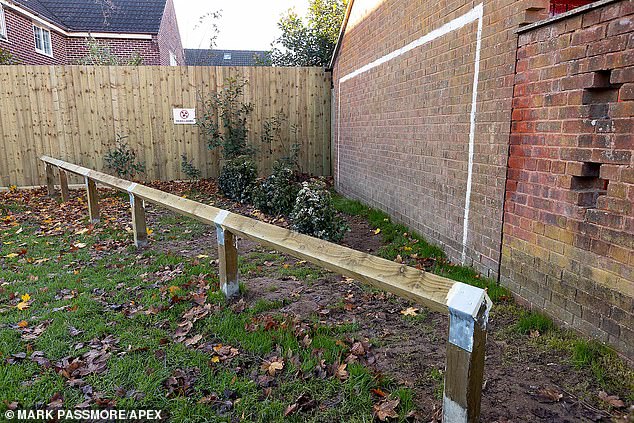 The rail erected in front of Brian Reeby’s garage in Headweir Road park, Cullompton, has sparked anger among local residents

He added: ‘I painted that goal on my garage about 35 years ago for my son.

‘I painted the goal so they would kick the ball in the corner of the park instead of near the road where they could damage cars and pick them up in the road.

‘My son is now 40 and is the Covid-19 research finance director for the National Statistic Office, so he’s no bloody idiot. The goal has been there ever since, and people have loved it.

‘We’ve had little competitions, and all the kids come down here now, and they have picnics, and God knows what else here while they play against the garage.’

He believes the minority of neighbours complained to the council following escalating tensions with children using the park.

The father said: ‘After it, all went quiet for a while; the next thing we know is that a fence and a wooden rail has been built.

‘I’ve got no problem with fence and the signs put up saying ‘no ball games are not enforceable.’

He does, though, have an issue with the wooden rail, citing concerns little children can get their fingers caught in the side of the fence.

The cost of the park’s maintenance was taken on by Cullompton Town Council four years ago when Mid Devon was looking to dispose of play areas.

Residents created a petition to save the popular park from closure four years ago.

Barbara Gozna, who started the campaign, said her two boys used to play football in the park and have been left upset they are no longer able to do so.

She said: ‘Some of the neighbours don’t like balls being kicked over to their garden and children apparently looking into their property, but it’s the same for all residents living along here. 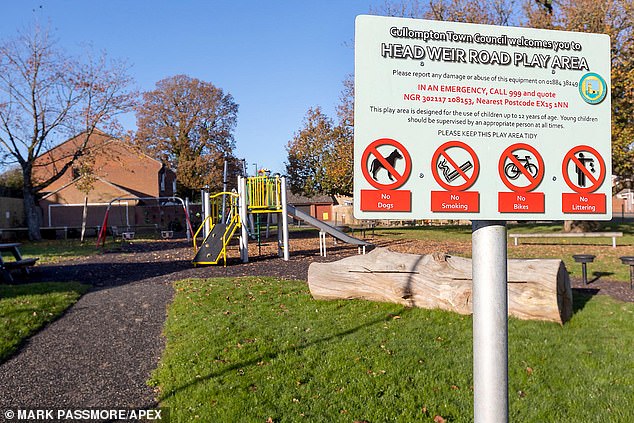 Cullompton Town Council recently installed new equipment within the park, but a popular outline of a goal in the corner of the play area is now inaccessible

‘These houses have been there for 30 odd years. My dad has lived in the end one for 20 plus years, and he’s never had any problems.

‘If they kick the ball over into the garden, you just kick it back.’

Ms Gozna added that there were alternative ways to address the issue aside from building the rail.

She continued: ‘It’s good for them to be able to be outside and active; we all want active children, but if you take away the space that is there for them to play football, as you can’t play football under the big oak tree.. I worry that someone is going to hurt themselves.

‘Ultimately, if you buy a house that’s next to a park, you have to expect this.

‘Some will continue to try and play football here, but they may trip over, and they’ll end up with splinters in their hands or will trip over and hurt themselves.’

Another neighbour on the road, Ryan Howarth, described the issue as ‘a bit crazy and very unreasonable’.

He said: ‘If I were the kids right now, I’d still be playing football right there and doing it a lot more.

‘I think it’s a bit crazy and very unreasonable because if you can’t allow kids to play football in a park for kids, there’s something wrong.

‘I’ve lived here many years, and I’ve had a front door smashed, but I live next door to a park with kids playing.

‘A ball is bound to come over at some point, and while it’s very unfortunate, you accept these things.’

Cullompton Town Council installed new equipment when they took on responsibility for the park’s maintenance.

The town council runs the play area, but the land is owned by Mid Devon District Council.

A Cullompton town councillor, who did not want to be named, said: ‘The logical outcome if there continue to be problems, is that the town council will give it back to Mid Devon and the fence will come down.

‘They will take the equipment out, and then everyone will play football in there because it will be a big open space. 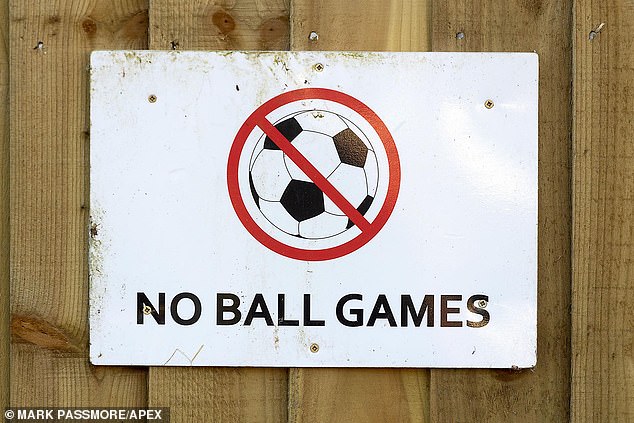 ‘The fence itself would have probably solved the problem, but it did not need the rail in front.’

In a joint response between Mid Devon District Council and Cullompton Town Council, a spokesperson said they had duties to ensure play areas ‘do not cause a nuisance’.

A statement said: ‘While we appreciate that the gesture to repaint a goal on the garage wall facing into the play area has been carried out in good faith, this area has been marked as a no ball games area and has been for some time following previous concerns.

‘Both councils have a duty to ensure that activities taking place in a play area do not cause a nuisance to residents of nearby properties and to ensure no damage is done to premises or neighbouring properties. 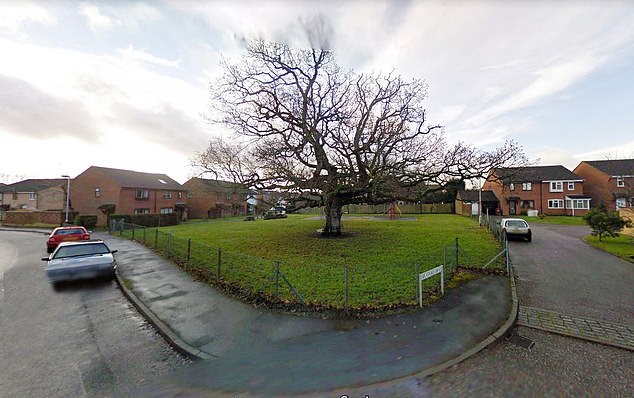 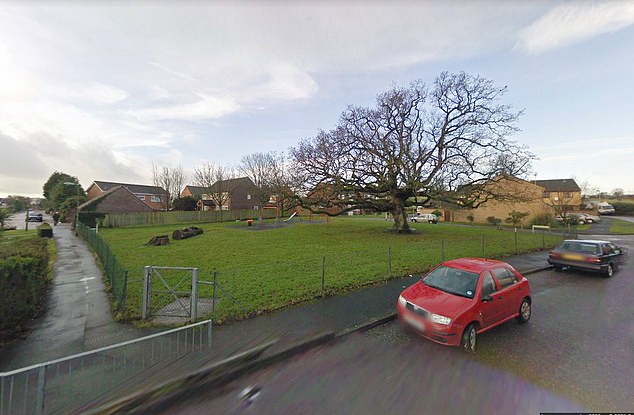 The play area was used by children to play football, but a ‘minority’ of neighbours became annoyed with with footballs being kicked into their gardens

“The town and district councils are keen to work together with residents to ensure both children, who wish to play ball games, and other residents have their views taken into account and have facilities nearby which they can freely use.

“There is a park around 500m away from Headweir Road accessed via Fairfax Drive, and an additional one around 1km away and which is more suitable for football games at Upcott Fields St Andrews Estate.’

The town council has now started planting shrubs at the park to allow the area to become a ‘site for wildlife and habitat creation’.

The joint statement added that the councils understood the issue was causing ‘upset’, but it needed to ‘balance the needs of everyone in the community’.

Many residents have spoken out against the council’s actions in local Facebook groups.

One said: ‘I just don’t understand why people would prevent kids from playing.’

Another added: ‘Some people are only happy when their [sic] moaning, its a play park for children to play, lets use it as such.’

A third said: ‘Children outside playing far better than indoors on electronics. Bushes in play area not good idea, bound to get damaged.’

Pictured: Driver of SUV that plowed through crowds at Waukesha Christmas parade